Another two incompleted pass of Mike White defined the game for the home team
12:17 AMa year ago
Q4: 0:22

After San Francisco punted with 50 second to end the game, Mike White passed to Devin Smith to the right for 19 yard gain, tackled by Tim Harris Jr.

Wilton Speight passed to Richie James Jr. to the left for 6 yard gain

Brandon Wilds rushed up the middle for 2 yard gain

Darius Jackson rushed to the left for 1 yard gain

C.J. Beathard passed to Austin Walter to the left for 5 yard gain

Brandon Wilds rushed up the middle for 6 yard gain

Brandon Wilds rushed to the left for 1 yard loss

Brandon Wilds rushed to the right for 5 yard gain

C.J. Beathard passed to Jalen Hurd to the left for 6 yard touchdown

Nown Jale Hurd has 2 TD in his first NFL game

11:33 PMa year ago
BEFORE FINISHING THE THIRD QUARTER AN EXCELLENT 45-YARD PASS FROM CJ BEATHER TO DEEBO SAMUEL PUT THEM IN RED ZONE
11:32 PMa year ago

END OF THE THIRD QUARTER

Austin Walter rush for no gain

11:24 PMa year ago
Mike White passed to Mike Weber Jr. down the middle for 5 yard loss

Excellent reading of the defensive player who made an aggressive tacle

Mike White passed to Mike Weber Jr. to the for no gain

Dallas first down on Dallas 43

Austin Walter rushed up the middle for 2 yard gain. San Francisco in 26

Austin Walter rushed up the middle for 10 yard gain. First Down 49ers

Darius Jackson rushed to the left for 3 yard gain

11:01 PMa year ago
It will be the first march of the Dallas Cowboys in the second half.
11:00 PMa year ago
Mitch Wishnowsky punted. Cedrick Wilson returned punt for no gain
10:59 PMa year ago
Q3 10:07

10:58 PMa year ago
C.J. Beathard incomplete pass to the right intended for Deebo Samuel
10:56 PMa year ago
A new foul forces them to go back five yards more to the 49ers.
10:54 PMa year ago
Offensive holding deprives San Francisco of a good run
10:53 PMa year ago

The 49ers attack in the third quarter

C.J. Beathard passed to Kaden Smith down the middle for 17 yard gain, tackled by Chris Covington
10:35 PMa year ago

Third field goal made of the night for Maher in four attempts. Dallas lead San Francisco 9-7 as we go into half time.
10:27 PMa year ago

Cowboys will try to make a quick run ahead of halftime.
10:06 PMa year ago
Chidowe Awuzie making big moves for the Dallas D.

Maher makes his second field goal of the night to increase the Cowboys lead to 6-0. Good drive by Cooper Rush as the QB.
9:30 PMa year ago

Rush and Wilson make a good couple of combinations and the Cowboys are already in the Niners's 40 yard line.
9:24 PMa year ago

Automatic first down for the 49ers. Pass interference by Dallas
9:13 PMa year ago

The Cowboys already in the red zone.
9:08 PMa year ago

Late flag and pass interference from the niners'. First down for Dallas.
9:07 PMa year ago

First down for Dallas after a 10 yard pass from Das to Gallop.
9:06 PMa year ago

Dak Prescott will take the football in his own 30-yard-line after a good kickoff return.
9:05 PMa year ago
Nick Muelles leads the home team coming out from the locker room.

9:03 PMa year ago
The boss made the trip to NorCal!

9:02 PMa year ago
28 listed players on the inactive list for the 49ers, including Garoppolo and Sherman.
9:00 PMa year ago
Dak Prescott will start for Dallas while Nick Muelles will do the same for the Niners'.
8:59 PMa year ago
Trust me when I say fans have been waiting this game for a minute.

It’s preseason but the Dallas Cowboys are back! pic.twitter.com/u6P3Hwf4RU

8:51 PMa year ago
Pre season starts now for the Dallas Cowboys in the hunt for greatness in the NFL.
8:31 PMa year ago
It is all smiles and hand shakes when the helmets are off, but the moment they gear up... 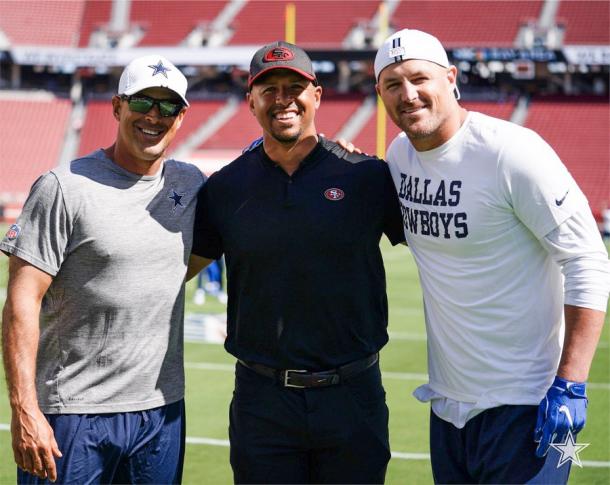 8:23 PMa year ago
It feels good to be home for the 49ers. The Levi's Stadium is more than ready for tonight's kick-off. 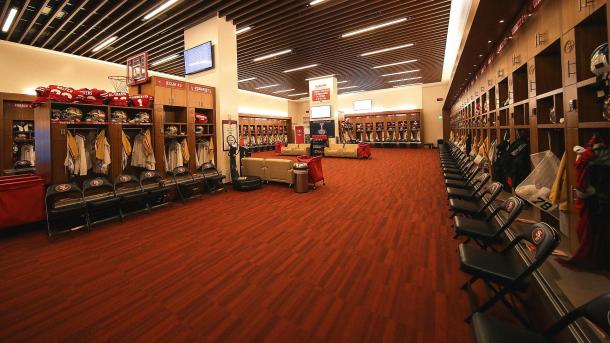 8:20 PMa year ago
Jason Witten is clearly enjoying every second out of this comeback. Cowboys fans can start to smile too.

8:18 PMa year ago
Taryn Christion could see action for Dallas. He's been practicing at receiver and punt returner as well as QB.
8:18 PMa year ago
It's less than 45 minutes for the long wait to be over. Football season is BACK!
7:59 PMa year ago
Cowboys running back Ezekiel Elliott won't be gearing up today in hopes of a new contract.

We'll also have to wait awhile for QB Jimmy Garappolo return from a knee injury.

7:49 PMa year ago
The day could not be better to play football. San Francisco's breeze, Levis Stadium and two hungry franchises like Cowboys and local 49ers.

7:29 PMa year ago
Tickets are still available if you are around the Bay Area, announced San Francisco 49ers in social media.
7:26 PMa year ago
After his retirement last year, Cowboys star Jesse Witten is gearing up today as a professional NFL player. The excitement is real.

Certainly excited to be back on an #NFL field as a player. @dallascowboys TE #JasonWitten doing some sprints @CBSDFW @CBS11Sports pic.twitter.com/t6W0ssdqrN

6:43 PMa year ago
Cowboys are off to their first preseason game. QB Dak Prescott can't be more excited. 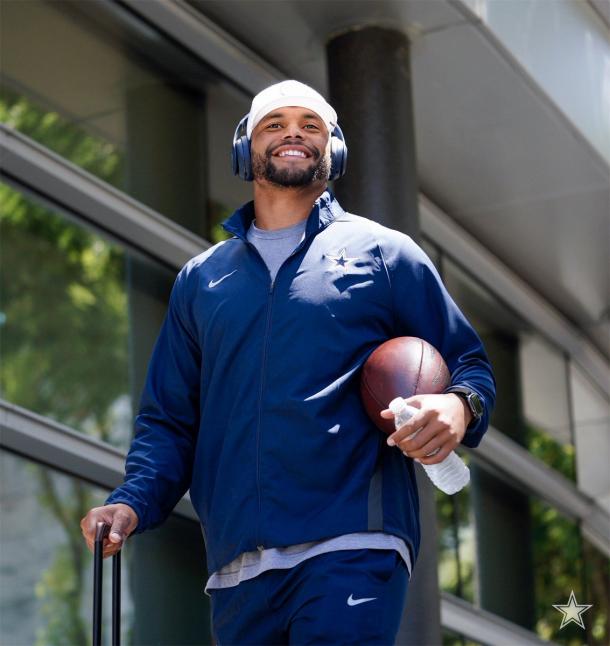 Saturday's NFL Preseason action begins at 8pm ET when Bengals take on Chiefs and Rams faces Raiders.
6:33 PMa year ago
Two and a half hours separate us from the preseason kick-off for Cowboys and 49ers. The road to the Super Bowl starts here!
7:11 AMa year ago
Do not miss a detail of the game with the live updates and commentaries of VAVEL. Follow along with us all the details, commentaries, analysis for this Cowboys vs 49ers game.
7:11 AMa year ago

One of the most benefited by the Elliot’s hold out is rookie Tony Pollard. The fourth-round selection has shined throughout these two weeks of camp. Pollard averaged 6.8 yards per carry, 12.4 yards per reception and 30.1 yards per kickoff return. 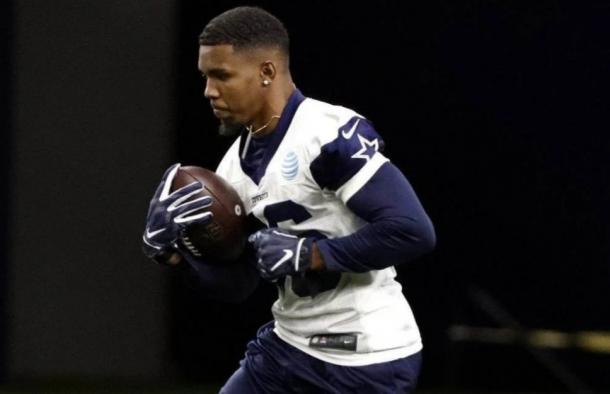 He scored nine touchdowns running, nine receiving and seven returning. "One of the most exciting players to me of this training camp," said Dak Prescott about the rookie.

On top of that, DE Robert Quinn broke his hand and was suspended two games by the league couple days after the injury. “Defensive end Robert Quinn will definitely miss the first two regular-season games now. The NFL has announced the veteran pass-rusher has been suspended for two games for a violation of the league’s policy on performance-enhancing substances. Quinn had recently returned to Dallas to undergo surgery on a fractured left hand that he sustained in practice earlier this week,” read on Cowboys official statement.
7:09 AMa year ago

Dallas Cowboys’ training camp is full of uncertainty and drama with Ezekiel Elliott’s absence. As Elliot holds out in pursuit of a contract extension, the Cowboys running back is looking for a paycheck similar to the $45 million guaranteed Todd Gurley got from the Los Angeles Rams. 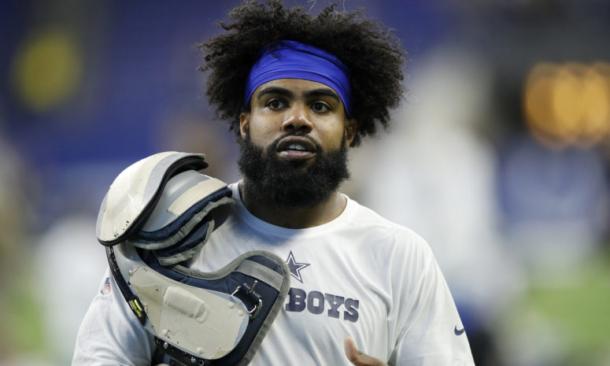 On the other side of the negotiating table, Cowboys owner Jerry Jones is thinking more along the lines of the $35 million guaranteed contract the Jets paid Le’Veon Bell, according to the Dallas Morning News. 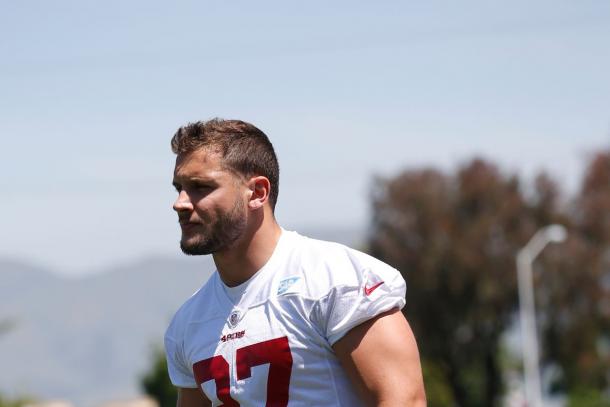 The San Francisco team hopes to have Bosa ready for Week 1. Also, RB Jerick McKinnon suffered a setback in his attempt to return from an ACL injury. Will miss roughly the next two weeks.

However, Coach Kyle Shanahan didn’t say which one will be the starter. “I wouldn’t say anyone has the edge, because I don’t want to go there yet,” he said to KNBR radio station.

7:03 AMa year ago
For 49ers and Cowboys, the road to the LIV Super Bowl starts in this precise game. The training camp time is over and the NFL preseason gets going tonight for both teams.
7:03 AMa year ago

How to watch 49ers vs Cowboys live TV and Stream

If you want to watch the game on TV, your options are: NFL Network and WNBC.

The 49ers vs Cowboys will be played at the Levi’s Stadium, in San Francisco. The kick-off is scheduled at 9pm ET.
7:02 AMa year ago
Welcome to VAVEL.com’s LIVE coverage of the 2019 NFL Preseason game: Dallas Cowboys vs San Francisco 49ers.