Short kick from the Cowboys. Bills start in midfield.
7:32 PMa year ago

Pass from Prescott to Jarwin, to get to Red Zone.
7:29 PMa year ago

Pass from Prescott to Cobb to be in rival territory.
7:28 PMa year ago

Buffalo punt. Cowboys will have the ovoid from the 30 yard.
7:22 PMa year ago

Dallas plays in 4&4 and drops the Prescott ball. But Dallas recovers the ball, Buffalo having possession of the ball.
7:12 PMa year ago

Pass from Allen to Foster and again, the Bills reach rival territory.
6:57 PMa year ago

4&goal is played by Dallas and does not prosper.
6:51 PMa year ago

Prescott runs for 11 yards and a personal foul brings Dallas into the red zone.
6:47 PMa year ago

Pass from Prescott to Randall Cobb to rival territory.
6:46 PMa year ago

Run Josh Allen for 15 yards and score the Touchdown. Extra point is good.
6:41 PMa year ago

Screen Pass to Cole Beasley and Buffalo is in the red zone.
6:39 PMa year ago

Pass from Allen to McKenzie to reach rival territory.
6:35 PMa year ago

Pass to Beasley to get to half the field. Then a personal foul adds 15 yards to the Bills' play.
6:21 PMa year ago

Start the third quarter and the Bills attack starts at the 29th yard.
6:10 PMa year ago
With this play of deception, Jon Brown threw touchdown pass to Devin Singletary.

He finishes the first half.

Pass from Prescott to Cooper and Dallas is in rival territory.
5:50 PMa year ago

Intercepted pass to Prescott. Buffalo recovers the ball in rival territory.
5:28 PMa year ago
Cole Beasley scored against his previous team and tied the game.

Look who's back and SCORING in Dallas: @Bease11!

Run for 26 yards Singletary to get to opposing field.
5:16 PMa year ago

Cowboys punt. Bills will have a new offensive from the 15-yard.
5:12 PMa year ago

Defensive interference and the Bills move into rival territory when they reach the 30 yard.
4:59 PMa year ago

Josh Allen gets out of trouble with a 25-yard pass to Cole Beasley.
4:55 PMa year ago

Bills stop the Dallas attack. Buffalo's offensive will begin at the 2nd yard.
4:52 PMa year ago

Run for 25 yards Ezekiel Elliott and Dallas is already in rival territory.
4:47 PMa year ago

Three and out for the Bills. Buffalo punt and Dallas will have a new offensive from the 5-yard.
4:46 PMa year ago
With this touchdown, the Cowboys went up on the scoreboard.

Add a TD to @JasonWitten's plate. He's got another on Thanksgiving!

Bills begin their first offensive series from the 19-yard.
4:41 PMa year ago

Prescott touchdown pass for 7-yard to Witten. Extra point from Maher is good.
4:38 PMa year ago

Complete pass from Prescott to Cooper. After the play, there is a personal foul on the Dallas WR and thus, they get to 1&goal.
4:36 PMa year ago

Screen pass to Zeke Elliott and the Cowboys are at the red zone gates.
4:35 PMa year ago

With punishment from Buffalo's defense, the Cowboys arrive in midfield.
4:33 PMa year ago

Touchback. The Dallas Cowboys will have their first possession from the 25 yard.
4:32 PMa year ago

Start of the match.
4:20 PMa year ago
Likewise, the Dallas Cowboys go out on their field to seek victory.

4:19 PMa year ago
The Buffalo Bills jump into the field

4:12 PMa year ago
Great atmosphere is lived in the Stadium with the theme of Thanksgiving Day. 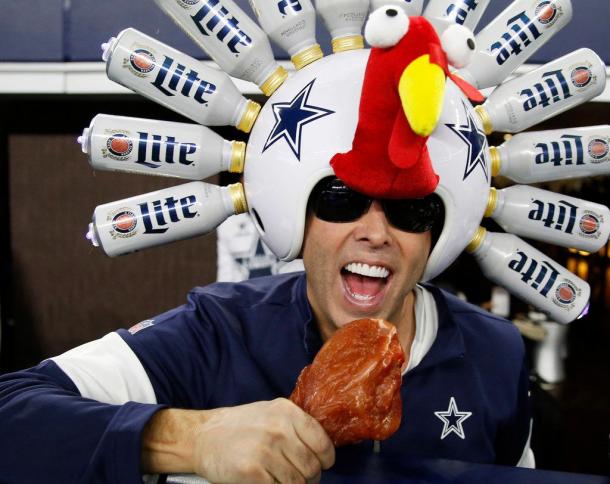 4:09 PMa year ago
This is How AT&T Stadium looks like for Thanksgiving GameDay. 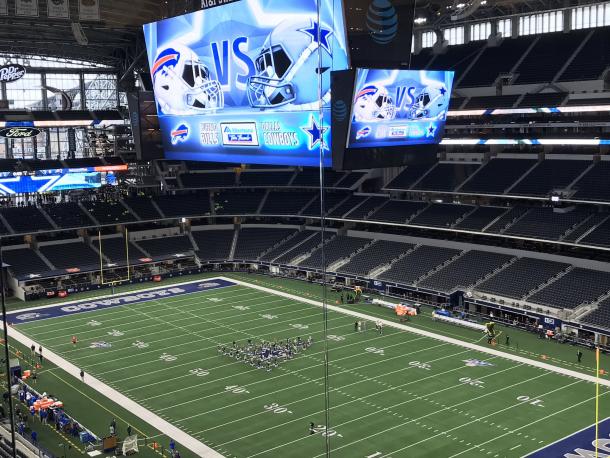 If you want to watch the game on TV, your options are: NBC.

Josh Allen, QB of Buffalo Bills. In his second year as QB in the NFL this being a pleasant surprise for own and strangers. The biggest strength he has is when he runs and is very effective, because by air he has 15 touchdowns by 8 interceptions. Calm should prevail in Allen because it will only be his second game on national television.
7:08 PMa year ago

Dak Prescott, QB of Dallas Cowboys. His numbers guarantee it, today more than ever Dakota Prescott has become the main image of the cowboys offensive. He is the leader in air yards throughout the NFL, but this has not stopped the criticism against him. He must respond in a pressure game such as this Thursday's; it's the great opportunity he needs to add bonuses to his multimillion-dollar contract he hopes to sign.
7:05 PMa year ago

Buffalo triumphs at home against Denver

An absolute dominance on the part of the Bills defence was what prevailed at New Era Field, but Buffalo's attack was slow to carburettor. However, the locals won (3-20) in a new display of solid defense. Managing to limit the opposing team to less than 10 units.
7:01 PMa year ago

Once again, the Cowboys hit a wall against a team with a better record than them. They had several opportunities to hurt the Pats, but simply could not. New England took the victory (9-13) against Dallas, in a predictable result but that generates more doubts in the team of the 'Lone Star'.
6:56 PMa year ago

Buffalo Bills, continue with the surprises

Few expected the Bills to become one of the top four teams in the entire AFC by this point in the season. With a very good ground attack and better defense, the team has only lost three games in 2019. It has a great opportunity to show itself in society by playing Thanksgiving and one of the most popular teams.
6:53 PMa year ago

Dallas Cowboys, back on the road to triumph

A very irregular season is the one the Cowboys have had in 2019. A month and a half after the end of the regular campaign they still have a positive record, but it is vital to get the victory. They will look for their second victory against a team with a winning record in this Thanksgiving.
6:49 PMa year ago

Defence wins out as the Los Angles Rams beat the Seattle Seahawks in Wildcard weekend. 5 days ago