Time out. Justin Tucker will come to define the game with a field goal.
3:56 PMa year ago

Ravens is played in 4&1, the conversion is good with QB Sneak.
3:41 PMa year ago

Niners are playing at 4&1 and the conversion isn't good. Ravens will have the ovoid from his 40 yard.
3:38 PMa year ago

Great reception for George Kittle and San Francisco is in rival territory.
3:34 PMa year ago

Ravens is on 4&5 and it's bad. Niners will have great possession of land.
3:32 PMa year ago

Short pass from Jackson to Snead, this brings the Ravens into rival territory.
3:28 PMa year ago

Stops the Baltimore defense. 49ers punt, Ravens will have the ball from the 41 yard.
3:20 PMa year ago

Niners got out of the situation and are now in their 20th yard.

Can't get past Baltimore at 3&11. Ravens punt and Niners will have the ovoid from their yard 1.
3:09 PMa year ago

Lamar Jackson runs for the 1&10. Plus there's more advancement for a personal foul from San Francisco.
3:05 PMa year ago

San Francisco is played in 4&1 and manage to advance by a defensive interference.
2:54 PMa year ago

Raheem Mostret runs for a yard, get the 1&10 and reach rival territory.
2:49 PMa year ago

Mark Ingram runs for 15 yards and the Ravens approach midfield.
2:41 PMa year ago

Rudeza against the San Francisco defense passer and the Ravens arrive at the 15-yard.
2:08 PMa year ago

Ravens in 4&2, good conversion with pass from Jackson to Hurds.
2:04 PMa year ago

Run Raheem Mostret for 40 yards and score the touchdwon. Extra point is good.
1:56 PMa year ago

Jimmy 'G' pass with Sanders to reach the rival's 40 yard.
1:55 PMa year ago
Lamar Jackson got the personal touchdown to take the lead in the game.

Finish the first quarter. Ravens and Niners tie at 7 points.
1:39 PMa year ago

Lamar Jackson's Red Option and the Ravens are approaching midfield.
1:32 PMa year ago

Three and out to San Francisco. Niners punt and Raven will start at the 16-yard.
1:31 PMa year ago
Lamar Jackson threw his first touchdown pass finding Mark Andrews.

All tied up in Baltimore. #RavensFlock @MAndrews_81

San Francisco begins a new offensive at the 30 yard.
1:26 PMa year ago

Punt Ravens. San Francisco has a new series from the 16 yard.
1:18 PMa year ago
Garoppolo found Samuel for the first touchdown of the day.

Ravens start the first offensive series of the game from the 20th yard.
1:10 PMa year ago

Screenplay of Garoppolo with Bourne, the Niners arrive in rival territory at the 40 yard.
1:03 PMa year ago

San Francisco has the first possession of the game since the 27th yard.
12:53 PMa year ago
Ravens ready for the start of the match.

12:31 PMa year ago
The Niners are in the mood to try to keep the first place of the NFC.

12:26 PMa year ago
The bad weather will be a factor for this afternoon's game. The field was covered a few hours ago. 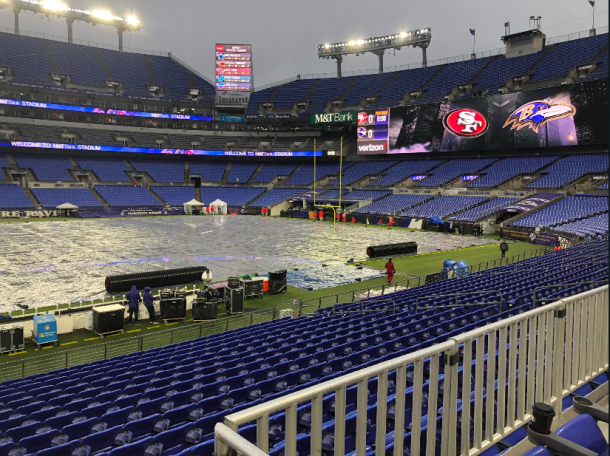 12:17 PMa year ago
In black uniform, the Baltimore Ravens will come out to play this half day. 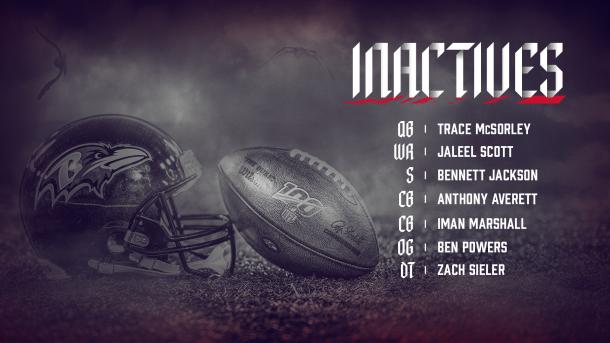 If you want to watch the game on TV, your options are: FOX.

Lamar Jackson, QB of Baltimore Ravens. In his second season of the NFL, Lamar is signing a year that has him as one of the great candidates to win the MVP. So far he has 29 touchdowns (by air and land), as well as more than 3,000 yards combined.
3:05 PMa year ago

George Kittle, TE of San Francisco 49ers. After returning to the court after two weeks of injury, Kittle is back on the San Francisco offensive. In nine games in 2019 he accumulates 670 yards and three TD's. His numbers aren't as spectacular compared to last year, but he's still the player with the most impact on the offensive.
3:01 PMa year ago

Ravens with power sample in L.A.

Baltimore was not left behind in a spectacular demonstration at prime time match. Lamar Jackson shone with four touchdowns in the game and Ravens beat the Rams (45-6) with what they say is present before the entire NFL to be one of the strongest candidates to win the Vince Lombardi trophy.
2:57 PMa year ago

A demonstration of great football and authority coup was the one that San Francisco gave in the Sunday Night Football. Niners overwhelmingly defeated (8-37) Green Bay Packers that never appeared in the grill. Aaron Rodgers was nullified by the defense of the Bay to get an important victory.
2:49 PMa year ago

A magical season are taking the Ravens by the hand for a year to be considered the MVP for the QB Lamar Jackson. They are reaching their best level in the NFL, the challenge will be to keep up. Because the best football must be played in December and January to reach the goal of the Super Bowl.
2:41 PMa year ago

The Niners have been slowly giving authority blows in the season and have not lost the rhythm since they lost the undefeated. A great defense and effective ground attack have given the team a great consistency to be placed as the No. 1 seed of the NFC.

Niners and Ravens will face each other for the first time since Super Bowl XLVII when Baltimore won its second ring. It will be a very different game for the years that have passed and it is catalogued as the Super Bowl LIV and a half. San Francisco arrives as the best team of the NFC and Baltimore as the seed two of the AFC.
2:23 PMa year ago