We are waiting for you for the next NFL live broadcast, with more information about your favorite team in VAVEL.
See you next time!
3:59 PMa month ago

With this kick Dustin Hopkins put the final score, and still missed another in the last quarter.

There is knee to knee and the game ends with a resounding victory for Washington 25-3 against the Vaqueros.
3:50 PMa month ago

DiNucci was captured again on the third occasion and for the umpteenth time the ball will go to Washington.
3:47 PMa month ago

On the fourth opportunity Hopkins kicked from 44 yards and missed the field goal.
3:34 PMa month ago

Poor send of DiNucci and it will quickly be a new offensive series for Washington.
3:28 PMa month ago

In fourth time the kick is complete by Hopkins and adds three more points for his team.
3:23 PMa month ago

We enter the final part of the game with a great offensive series for Washington, in which Allen has found Thomas and McLaurin with 12 and 8 yard passes respectively.
3:18 PMa month ago

DiNucci was tackled a third time and now it will be Washington's chance to go on the offensive again.
3:14 PMa month ago

DiNucci throws his first full pass of 32 yards, he will be covering the QB position after Andy Dalton's exit through injury.
3:12 PMa month ago

Bostic was disqualified from the match because of the action on Dalton.
3:09 PMa month ago

Andy Dalton was hit very hard helmet by helmet and was left lying on the grass.
3:04 PMa month ago

In the third down, Washington was left 5 yards from the 1st and 10th and it will be an opportunity for Dallas to go on offense.
2:57 PMa month ago

Dalton's incomplete pass and Washington will have the first offensive series in the complement.
2:55 PMa month ago

Allen connected with Thomas in this way, and thus escaped the closed wing to achieve the score.

The second half begins and the offensive series is for Dallas.
2:41 PMa month ago

The advantage is tremendous for Washington; and the Cowboys with many injuries, bad defensive play and lack of concentration to finish the touchdown.
2:36 PMa month ago

Full short pass from Allen to Thomas, the latter carried the ball and entered the end zone.
Hopkins' kick is good and made the extra point.
2:06 PMa month ago

In the fourth opportunity Holcomb tackled Dalton and now it will be an opportunity of offensive series for Washington.
1:59 PMa month ago

Kyle Allen dropped a 52-yard pass to McLaurin who walked into the end zone.
They tried a two-point play but Thomas dropped the ball and it was incomplete.
1:47 PMa month ago

The 2nd Quarter begins with an offensive series for the Cowboys.
1:41 PMa month ago

The first TD of the match

With this play Gibson increased the advantage for Washington.

This is the play of safety

In this way, Washington made its first two points.

On the fourth occasion Zuerlein kicked and scored the field goal for Dallas.
1:34 PMa month ago

66-yard return for Cowboys!
Pollard grabbed the ball and went in until he was near the end zone.
1:30 PMa month ago

Gibson entered the end zone after traveling 12 yards with a gap that opened up down the middle.

Allen sent a 26-yard pass that leaves Washington with a great opportunity for the TD.
1:24 PMa month ago

Safety!
In the third opportunity Daltón sent the ball to Collins who lost the ball and in the end zone Schultz recovered it but was tackled in that zone.
1:17 PMa month ago

On the fourth occasion the Cowboys' defense did not allow access by land and Washington lost the opportunity of the TD staying one yard away.
1:15 PMa month ago

A TD was scored, which after the review was annulled because the player did not enter the end zone.
He stayed very close!
1:10 PMa month ago

A gap opened up and Gibson ran 40 yards to get a first and goal for Washington.
1:03 PMa month ago

The game starts with an offensive for Washington.
12:55 PMa month ago

Ready to go, the Cowboys will wear their uniform in white with gray and blue details.

Washington with a great vibe

This is how he dances and looks his uniform in cherry Chase Young.

Warming up the Cowboys

Dallas prepares its offensive line to hurt and win the game by any means necessary.

The locals are already training

Washington is fine-tuning its engines to take the field and seek that victory it has not seen since the first of the season. 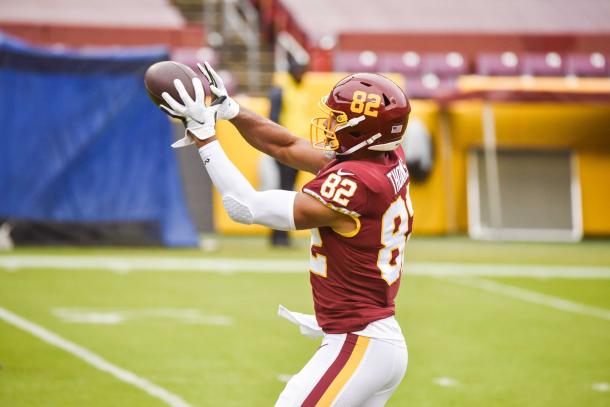 The Cowboys' defensive wing will see play again, starting at the end of the 2018 season.

The Cowboys have arrived

The visitors are in the stadium of the capital team to win and regain the leadership of the National Conference East.

Washington Football Team only won in its presentation against Eagles in September, since then it has lost against the Cardinals, Browns, Ravens, Rams and Giants.

They don't have a star running back, and it's been hard for Kyle Allen to get the team on offense.

Don't miss all the news related to the Dallas Cowboys vs Washington Football Team game in week 7 of the NFL 2020, live by VAVEL USA.
Stay with us!
12:36 AMa month ago

In a moment we will bring you all the details that come up before and during the Dallas vs Washington game live from FedExField Stadium.

Previous match between Dallas and Washington

December 29, 2019 was the last time these teams faced each other, and the Cowboys crushed Washington with a tremendous score of 47-16.
12:26 AMa month ago

Where and how to watch Dallas vs Washington

If you want to watch the game on TV, you can do so through the FOX SPORTS channel.

If you prefer to follow it live on the Internet, VAVEL USA is your best option.

This is Kyle Allen's first play as a Washington player and he hasn't had a good start, having a total of 354 yards in 7 games.

However, QB is expected to return to the level he presented during his time at the Carolina Panthers so he can qualify his current team for the playoffs.

Andy Dalton will have to improve his performance to make up for the absence of Dak Prescott, who injured his ankle terribly in front of Giants.

He threw two interceptions in his first full game, which was last week against Cardinals, but will have to use his experience to lead his team to victory. 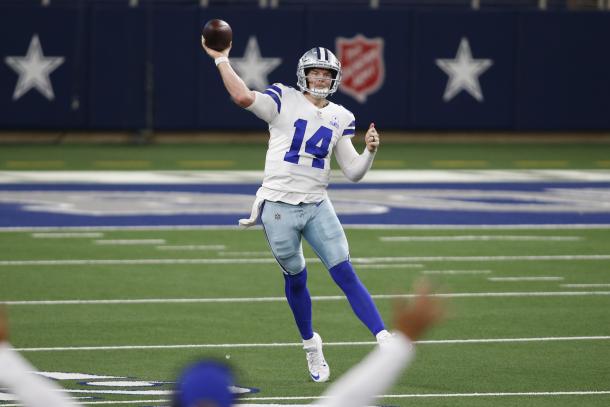 Washington, on the other hand, has a mark of 1-5 and is currently in third place at the National Conference East.

In their previous match they were defeated by the Giants in a very close game that ended 20-19.

The Dallas team arrives at its match this Sunday dragging a humiliating 38-10 defeat against the Arizona Cardinals in the Monday Night Football.

They have a 2-4 mark, plus they lost their star quarterback Dak Prescott two weeks ago.

The Cowboys vs Washington match will be played at the FedExField stadium, in Landover, Washington DC.
The kick-off is scheduled at 1:00pm ET.
11:56 PMa month ago

Welcome to VAVEL.com’s LIVE coverage of the NFL 2020 match: Dallas vs Washington!

Gardner Pursuing His Dream In The NFL &nbsp; 5 days ago
Restore your password
Please enter your user name or email.
Login Member or Writer Panel
Enjoy your own Customized Newspaperwith VAVEL topics' carousels!