We hope you enjoyed this Monday Night Football game and the Seattle Seahaws' victory.

Stay tuned to VAVEL for more results and sports information.

With this TD the match ended

The Seahawks are left with a win that in the end was not so great.

Long pass from Wentz to the area that Rodgers ends up capturing.
Sanders enters by hauling and goes into the end zone with two points.
12:23 AM10 months ago

In fourth time Mayers' kick was good and adds three more points to the score.
12:16 AM10 months ago

In fourth time Philadelphia played with 4ta and 30 but it was impossible and there will be offensive series for Seahowks in the 25.
12:10 AM10 months ago

The Seahowks offensive series culminated with a capture of Hyde and the Eagles will come with little time to make the comeback.
11:59 PM10 months ago

Good offensive series for Philadelphia and in fourth opportunity they played it but Wentz's pass was intercepted by Diggs.
11:49 PM10 months ago

Metcalf was left with a great 31-yard pass and a defender attached to it.
11:43 PM10 months ago

In the fourth opportunity the Eagles played but Wright deflected the pass from Wentz and they will have the possibility for an offensive in the 48th Philadelphia.
11:40 PM10 months ago

The last quarter begins with an offensive series for Eagles, can they come back?
11:31 PM10 months ago

The 18-yard pass was completed and Seahawks now crosses the midfield.
11:19 PM10 months ago

Because Wentz was caught, the fourth chance came and Elliott got the 42-yard touchdown.
11:13 PM10 months ago

Philadelphia passes the midfield in a good offensive series.
11:08 PM10 months ago

He started the third quarter with offense for Seahawks but ended soon and Wentz will come to coordinate the attack of the locals.
10:51 PM10 months ago

The Eagles are coming

Wentz found Goedert with a short pass and Philadelphia broke the zero before halftime.

The extra point was incomplete.

Based on hauling, Philadephia manages to pass the midfield for the first time in the game.
10:32 PM10 months ago

Entered based on his power

Carson gets the score by means of a haul in which the rivals and even a partner were removed by pushing and the advantage for the visitors is extended.

The kick is good for the extra point.

Good offensive series for Seattle that already passes the midfield.
10:12 PM10 months ago

Wilson found David Moore with a short pass and thus managed to open the score in the second quarter.

The extra point is complete by Myers.

Great 18-yard pass that leaves the Seahowks right in the middle.
10:00 PM10 months ago

One of the captures of the 1st Quarter

On the third opportunity Wntz was captured and there will be an offensive series for Sattle.

Both teams' attacking moves will soon be over!

On the fourth occasion Wilson is captured by Burnette, who manages to take the offensive from the Seahawks for the second time.
9:41 PM10 months ago

Wentz is left with another incomplete pass at the third time and a new Seahawks attack will come quickly.
9:36 PM10 months ago

In the fourth opportunity the Seahawks played, Moore was caught 5 yards behind, and concluded with a Barnett tackle the good offensive series.
9:26 PM10 months ago

Wentz had three incomplete passes in a row and immediately it will be the seahawks' turn to attack.
9:18 PM10 months ago

The game starts and the Eagles will have the first offensive series.
9:12 PM10 months ago

All set at Lincoln Financial Field

The players of the local team are already on the court, and everything seems to be fine for the match to take place.

These players will miss tonight's game by the Seahawks.

These are the players who will not see action today for the Eagles.

These are the uniforms with which the Eagles' team will take to the field in search of a high flight.

The Seahawks have arrived

The visitors have already taken to the field for their commitment tonight, will they manage to add one more victory?

In a moment more we will share with you all the details of the match that will face Seahawks vs Eagles in the Monday Nigth Football of week 12.
6:59 PM10 months ago

In a moment we will bring you all the details and news of the game that will face Seahawks vs Eagles in this Week 12 Monday Night Football.

Last match between Eagles and Seahawks

How and where to watch LIVE: Eagles vs Seahawks

If you want to watch the game on TV you can find it on the ESPN signal.

Quarterback Russell Wilson has been on a roll all season, making excellent airborne scores.

It is thanks to him that the Seahawks are in first place in the NFC West.

Despite defeats and interceptions in recent games, Carson Wentz has given the team several points through the pass.

And while the team needs to improve, he will be a key factor in tonight's game. 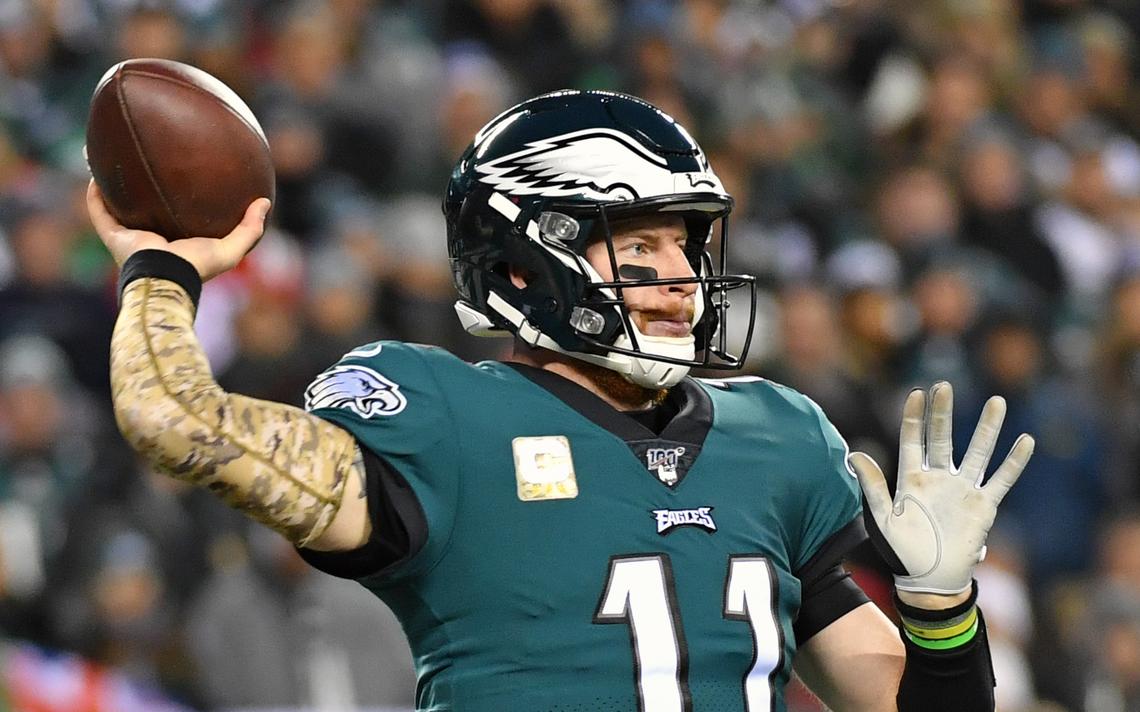 Although he has painted a good campaign for the visiting team, in the last few games they have suffered some losses against Bills and Rams.

However, they have made their home a fortress and in the last game they defeated the Cardinals by a score of 28 to 21.

Can they win on their visit tonight?

Not a good time to be Eagle

The current tournament has left many tough defeats for the Philadelphia team, with a run of three wins, six losses and a draw.

They are on a two-defeat streak and in the last game they were beaten by the Browns with a score of 22-17.

The Seahawks vs Eagles match will be played at the Lincoln Financial Field stadium, in Philadelphia, USA.

Welcome to VAVEL.com’s LIVE coverage of the NFL 2020 game: Seahawks vs Eagles!