Thank you for following the Jaguars-Cowboys game for week 3 of the NFL preseason. See you next time.
3:06 PMa year ago

They did not win

Dallas was winless in preseason and in its last game lost at home to the Jacksonville Jaguars, who shined from the first quarter thanks to Trevor Lawrence.
3:05 PMa year ago

Jacksonville kneels three times and the game will be history.
3:04 PMa year ago

DiNucci finds Dixon for the touchdown.

Incomplete pass by DiNucci and it will be fourth. Two-minute break.
2:55 PMa year ago

Incomplete pass by DiNucci and it will be fourth. Two-minute break.
2:54 PMa year ago

Devine Ozigbo powers through and finds the end zone! @Jaguars

Ozigbo with the four-yard carry up the middle to extend the lead.

Short carry up the middle and the Jaguars continue to eat up the clock as much as possible.
2:42 PMa year ago

DiNucci can't find Mitchell and the Cowboys turn the ball over.
2:36 PMa year ago

Fumble on third down that Jacksonville recovers but with negative yardage. Field goal attempt.
2:33 PMa year ago

From Lutton to Evan and the Jaguars move the chains.
2:27 PMa year ago

Carry up the middle and Jacksonville moves the ball.
2:25 PMa year ago

They play it in the fourth but Dinucci does not complete the pass and they will give away possession.
2:25 PMa year ago

Dinucci with the bomb that is incomplete. Interference was called for but nothing is penalized.
2:22 PMa year ago

Tradwell with the reception despite the coverage of two players and enters the diagonals.

Cotton with the reception down the sideline and the Jaguars are already in the red zone.
2:10 PMa year ago

Big mistake by the Dallas defense that gives away first and ten for a personal foul.
2:07 PMa year ago

Poor coordination between the center and the quarterback with a loss of 17 yards.
2:05 PMa year ago

Cotton Jr scampers down the sideline more than 25 yards for first and ten, near midfield.
2:01 PMa year ago

Dinucci with the very high pass and Dallas three and out, to clear.
1:56 PMa year ago

Lutton with the incomplete pass and the Jaguars will have to clear.
1:55 PMa year ago

Ozigbo with the carry to move the chains for the first time in the second half.
1:54 PMa year ago

The second half begins. Jaguars on offense.
1:39 PMa year ago

Gilbert with the short pass that is incomplete.
1:32 PMa year ago

Now Beathard makes a mistake and is intercepted.
1:32 PMa year ago

Cotton Jr with the impressive reception to move the chains past midfield.
1:28 PMa year ago

Beathard with the pass incomplete due to the receiver completing the reception out of the backfield. Dallas to clear.
1:28 PMa year ago

Lambo with the 37-yard field goal to widen the gap.

Beathard sharpens his aim and finds Cotton Jr. in single coverage. The play is reviewed and the touchdown is overturned, incomplete pass.

Throw by Garrett Gilbert was on the money 💰

Beathard with the bomb to the opponent's 38-yard line. First and ten Jaguars.
1:11 PMa year ago

Gilbert from the formation finds Parker to break up the shutout.

Gilbert completes to Turner and Dallas is already at the opponent's 31-yard line. Then Hardy turns the corner and gets another first and ten.
1:05 PMa year ago

Dallas surprises by taking a gamble and Gilbert makes the right pass to advance into Jaguar territory.
1:05 PMa year ago

Gilbert again fails to pass on third down and the Cowboys in a series that promised for more will have to clear.
12:59 PMa year ago

Beathard's three-yard pass to Hammond that falls short of the mark and Jaguars to clear.
12:53 PMa year ago

Gilbert now with the pass incomplete on third down and Dallas to clear inside their 25 yard line.
12:51 PMa year ago

Second TD of the day for the @Jaguars QB!

Lawrence puts the ball in the corner for Shenault's reception in the promised zone.

Carter is flagged for a personal foul and the Jaguars have the ball at the opponent's 38-yard line.
12:32 PMa year ago

Rush with the delivery that falls short of the mark to Eubanks and Dallas to clear.
12:27 PMa year ago

Knox with the carry and Dallas moves the chains to get out of a very tight zone.
12:22 PMa year ago

Lawrence with the incomplete pass on third down near midfield.
12:17 PMa year ago

Rola Lawrence to his right side and completes the pass to move the chains.
12:12 PMa year ago

Rush with the incomplete pass and again Dallas to clear.
12:07 PMa year ago

.@Trevorlawrencee marches the @Jaguars down the field and gets the TD to @KingTutt_chdown! 🔥

Lawrence connects down the sideline with Cooper for the first touchdown of the game.

Lawrence's bomb and the Jaguars are already in the opponent's zone.
11:52 AMa year ago

Rush with the incomplete pass on third down and the Cowboys to clear.
11:47 AMa year ago

The game begins. Cowboys on offense.
11:42 AMa year ago

Lawrence is ready on the field to take command of the offense.

We are minutes away from the start of the game between Cowboys and Jaguars. Don't miss the most relevant plays.
11:32 AMa year ago

In addition to this game, four other games will be played to conclude the NFL preseason:

Although many of them will not be active today, all players are uniformed and take the field for warm-up protocols. 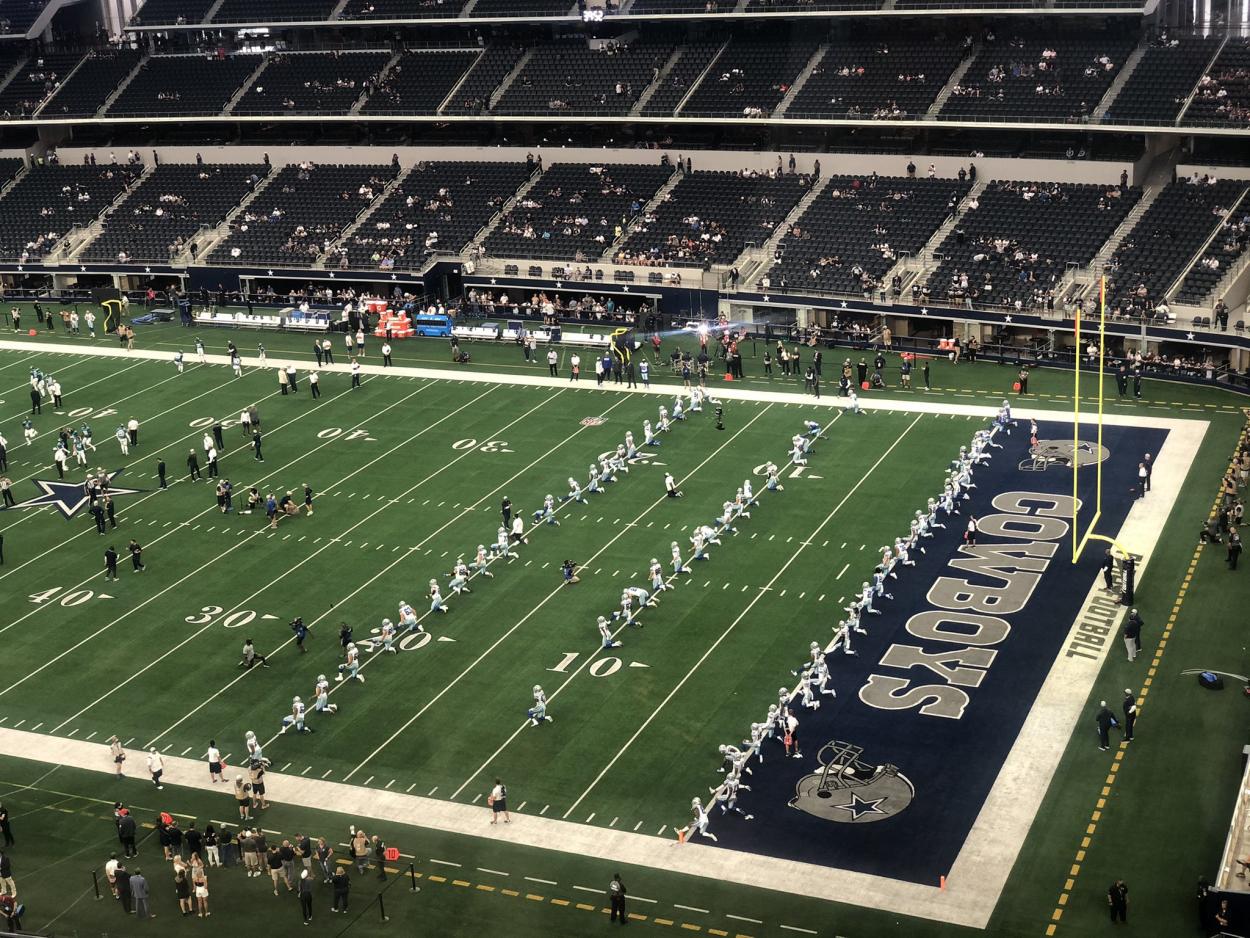 Goes as a starter

Trevor Lawrence clears doubts and he will be the starter for this last preseason game. It should be noted that in two games he has not been able to throw a touchdown pass.
11:17 AMa year ago

NFL teams have shown their support for New Orleans and the Louisiana stadium in the wake of Hurricane Ida.

Our football family goes beyond the field.

Praying for all those on the Gulf Coast. Please stay safe. 🙏 https://t.co/8ahGSOCVWi

Here are some of the most important stats from the short-lived Cowboys-Jaguars rivalry: 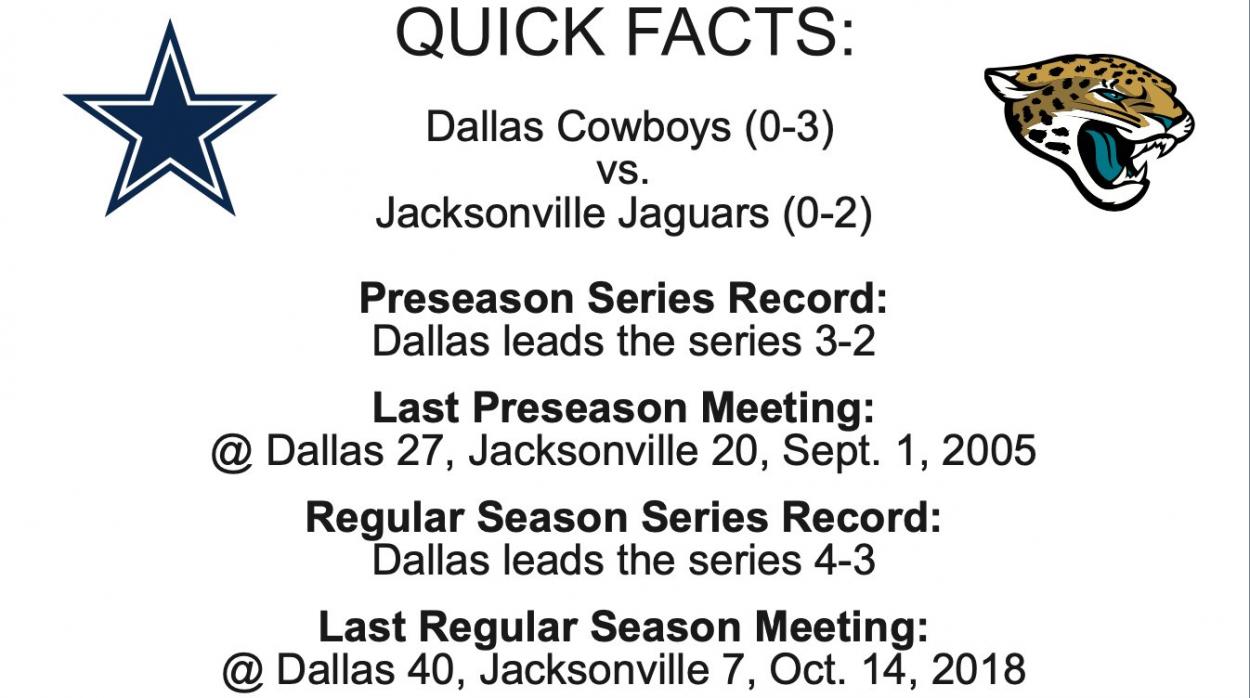 The Jaguars will once again jump into their first uniform when they visit AT&T Stadium, remembering that Dallas plays its home games in a white uniform. 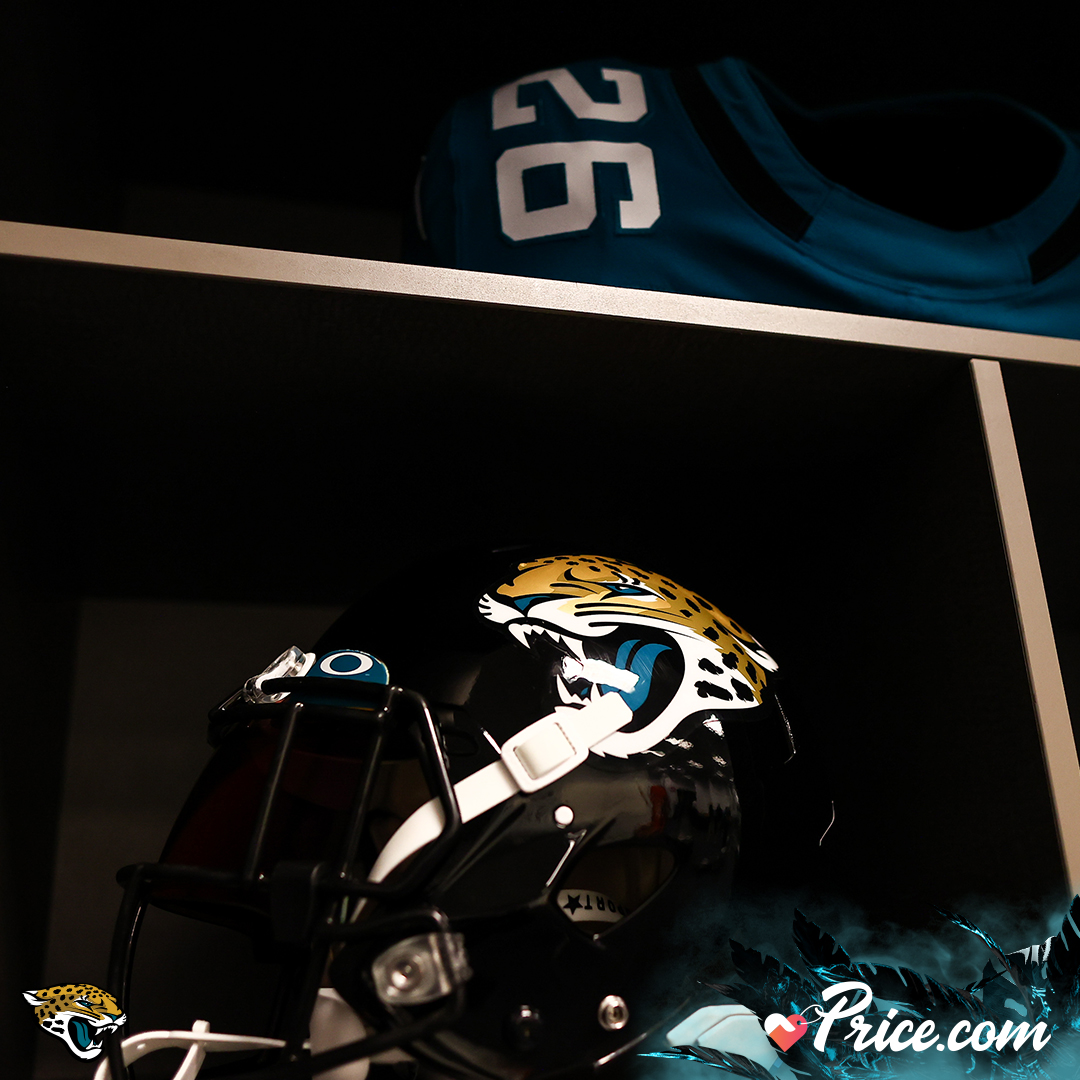 These Jacksonville players will not be active this Sunday against Dallas: 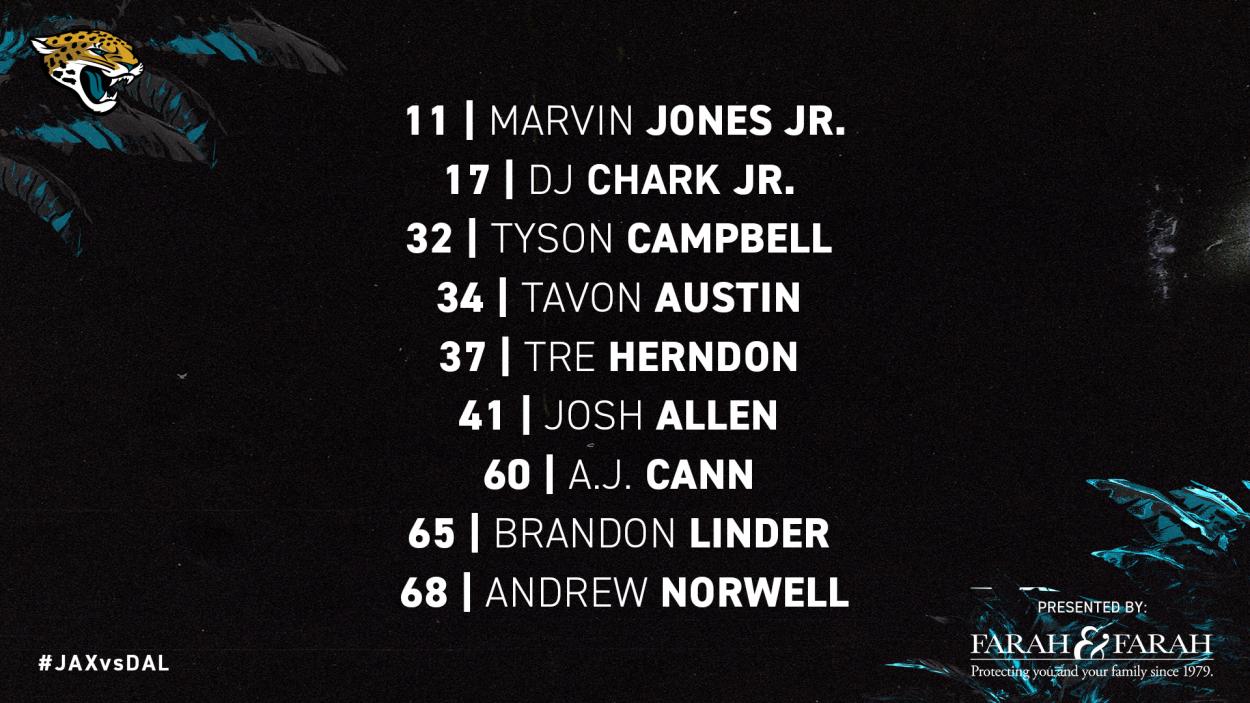 When there was speculation last Monday that Lawrece was not assured of a starting spot, this week the Jaguars confirmed him as the starter for the regular season and sent Minshew to the Philadelphia Eagles.
10:52 AMa year ago

Dak will not be

As reported, Dak Prescott is progressing and will be 100% for the start of the regular season when they visit Tampa Bay, but he will not see action this afternoon either.
10:47 AMa year ago

The Jacksonville Jaguars and Dallas Cowboys conclude their preseason with this vibrant game at AT&T Stadium. We start with the coverage.
10:42 AMa year ago

Do not miss a detail of the match with the live updates and commentaries of VAVEL. Follow along with us all the details, commentaries, analysis and lineups for this Jacksonville Jaguars vs Dallas Cowboys NFL Preseason match.
10:37 AMa year ago

What time is Jacksonville Jaguars vs Dallas Cowboys match for NFL Preseason?

This is the start time of the game Jacksonville Jaguars vs Dallas Cowboys of 28th August in several countries:

Since 1997 when the Jacksonville franchise was born, they have only met seven times in their history with a minimal advantage for the Cowboys with a record of 4 wins and 3 losses; the last time they played in Arlington was in 2018 with a win for the hosts by a score of 40 to 7.
10:27 AMa year ago

Defensive wing DeMarcus Lawrence has been a vital piece with the Cowboys, although he has already expressed that he is studying the offensive line of the Tampa Bay Buccaneers, the team with which they will open the season and with that the NFL Kick-off will take place. 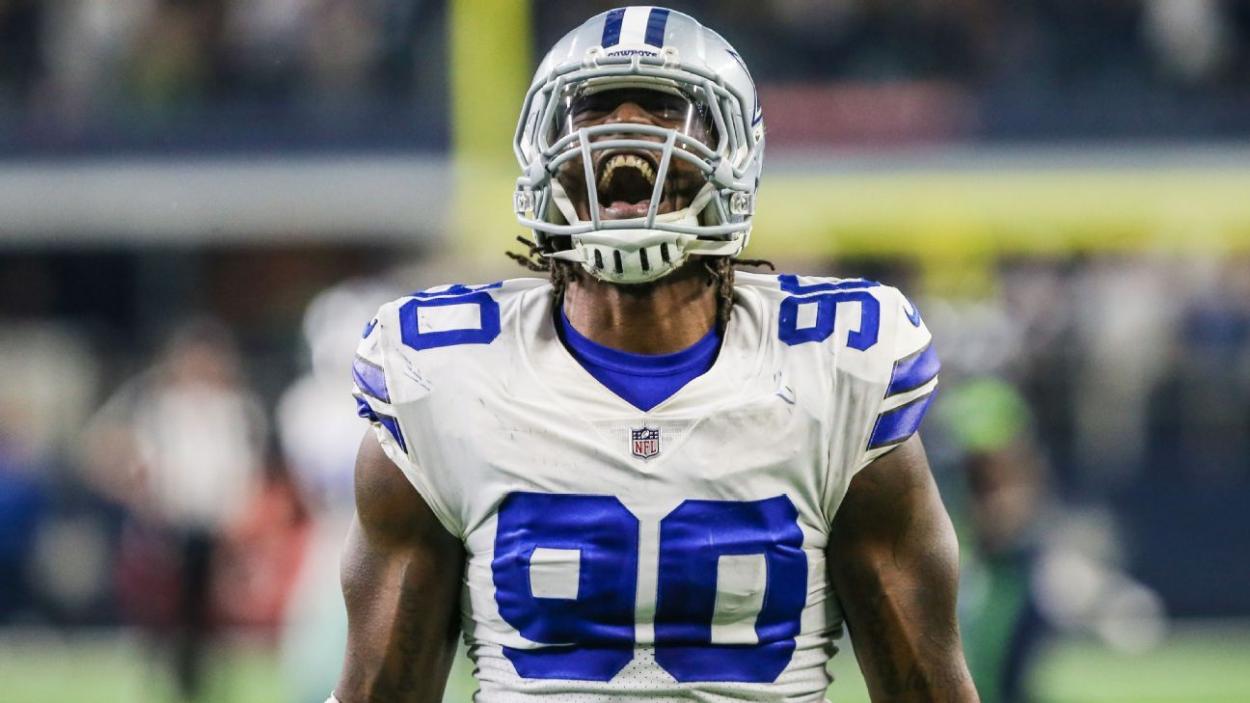 Trevor Lawrence has had a hard time adjusting to the NFL and has yet to throw his first touchdown pass as a pro. In addition, rumors in Jacksonville indicate that he is still not a guaranteed starter, so he needs to improve his on-field performance. 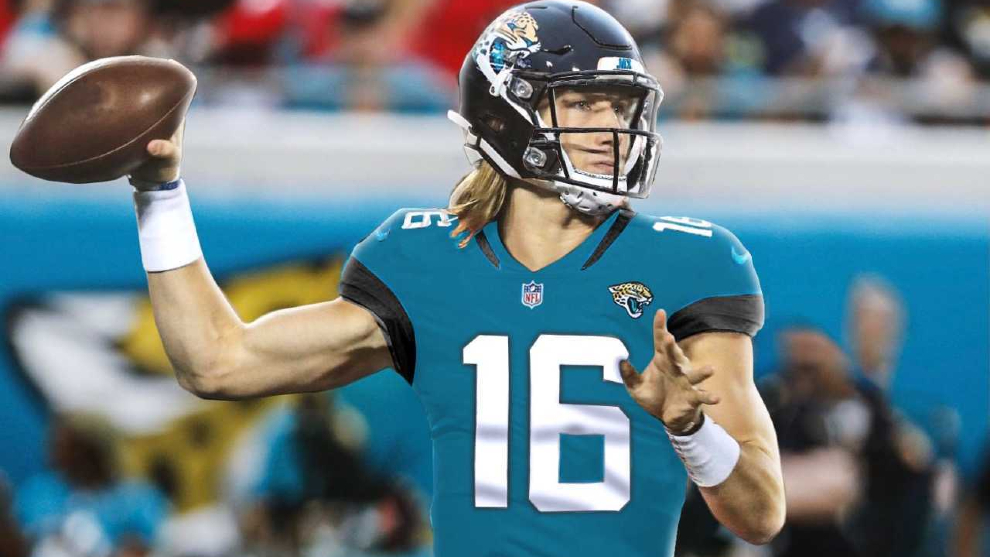 Still without Dak Prescott at the controls, the defense with starters and substitutes still leaves some doubts that will have to be polished in this game because it has also lost all its preseason games against the Pittsburgh Steelers, Arizona Cardinals and Houston Texans. Mexican Isaac Alarcón is expected to be active, but in a reduced form in the second half.
10:12 AMa year ago

The Jaguars have had brave reactions in the last periods against the Cleveland Browns and the New Orleans Saints, but it has not been enough for them to get the victory. Although, beyond the fact that it is preseason, a victory will help the team a lot to motivate them for the start of the regular season where they will face the Houston Texans.

The bad news of the week was the news that rookie running back Travis Etienne, coming from Clemson University, will require surgery on his foot and will be out for the entire next season.

The Jacksonville Jaguars vs Dallas Cowboys match will be played at the AT&T Stadium, in Arlington, United States. The kick-off is scheduled at 1 pm ET.
10:02 AMa year ago