We hope you enjoyed this Thursday Night Football game, with a resounding victory for the Buccaneers.

Stay tuned to VAVEL for much more from the NFL!

With this TD Hurts play, they thought they were on the comeback trail but unfortunately they did not complete one more offensive series.

Tom Brady took advantage of the zone on first and 10 and ended the game with a knee to the ground victory for the Bucs.
11:15 PM11 days ago

Hurts enters the end zone to score another TD for Eagles, and with the extra play they scored two more points.

Philadelphia wants to take the game!

On fourth down, the Bucs had a play but Brady's pass went out of bounds.

And the Eagles' offensive series will come at halftime.

Elliott misses a 43-yard field goal and what looked like a good series ends with no points for Eagles.
10:51 PM11 days ago

Great pass from Hurts to Smith who gets a total of 25 yards and passes the midfield in a good offensive series for Philadelphia.
10:36 PM11 days ago

Hurts escaped by carrying the ball to the right and went all the way into the end zone for the Eagles second TD of the game.

After the extra point everyone cut it to two touchdowns.

Fournette gets the Buccaneers a one-yard carry and scores another TD in the game. After the extra point, Tampa Bay is 21 points ahead.

Fournette advanced a total of 20 yards via the carry and made it all the way to midfield.
10:11 PM12 days ago

Hurts was looking for a pass that was incomplete, but it was destined for Smith, now it will be a new offensive series for Bucs.
9:53 PM12 days ago

The first half of the game ends with a partial victory for the Tampa Buccaneers who largely dominate the game.
9:42 PM12 days ago

On third down Hurts looked for Gainwell with a very long pass but the ball did not reach its destination.
9:38 PM12 days ago

Fournette powered down the middle of the field for his second TD of the season and third of the game for Bucs.
9:28 PM12 days ago

Hurts attempted a long pass to Watkins, but the ball was found by Dean to make the interception.
9:25 PM12 days ago

Brown alone in the end zone

With this play Tom Brady's team takes the lead again by a TD.

Incomplete pass by Hurts looking for his teammate Ertz but ended up out of the field and a new offensive series for Tampa Bay will come.
9:09 PM12 days ago

On third down Hurtso found Reagor but the pass was incomplete and a new offensive series for the Bucs would come from the 33 yard line.
9:00 PM12 days ago

Good offensive series by the Philadelphia Bucs that ended in this TD.

Great pass from Brady to Brown for 23 yards to get the Bucs second touchdown.

Hurts easily found Ertz in the end zone and the TD was scored.

After the field goal everything is even at Lincoln Financial.

Impressive reception by Watkins after a pass that reached to be deflected but with great technique he kept the ball.
8:33 PM12 days ago

Nice pass from Brady that found Howard in the end zone, scoring the first TD of the season for the tight end.
8:27 PM12 days ago

Brady found Evans with a 22-yard pass and it's across midfield Tampa Bay.
8:23 PM12 days ago

The game begins with the first offensive series in favor of Tampa Bay.
8:09 PM12 days ago

As we mentioned before, Tampa's defensive sector has suffered many injuries, this is the complete inactive report for tonight. 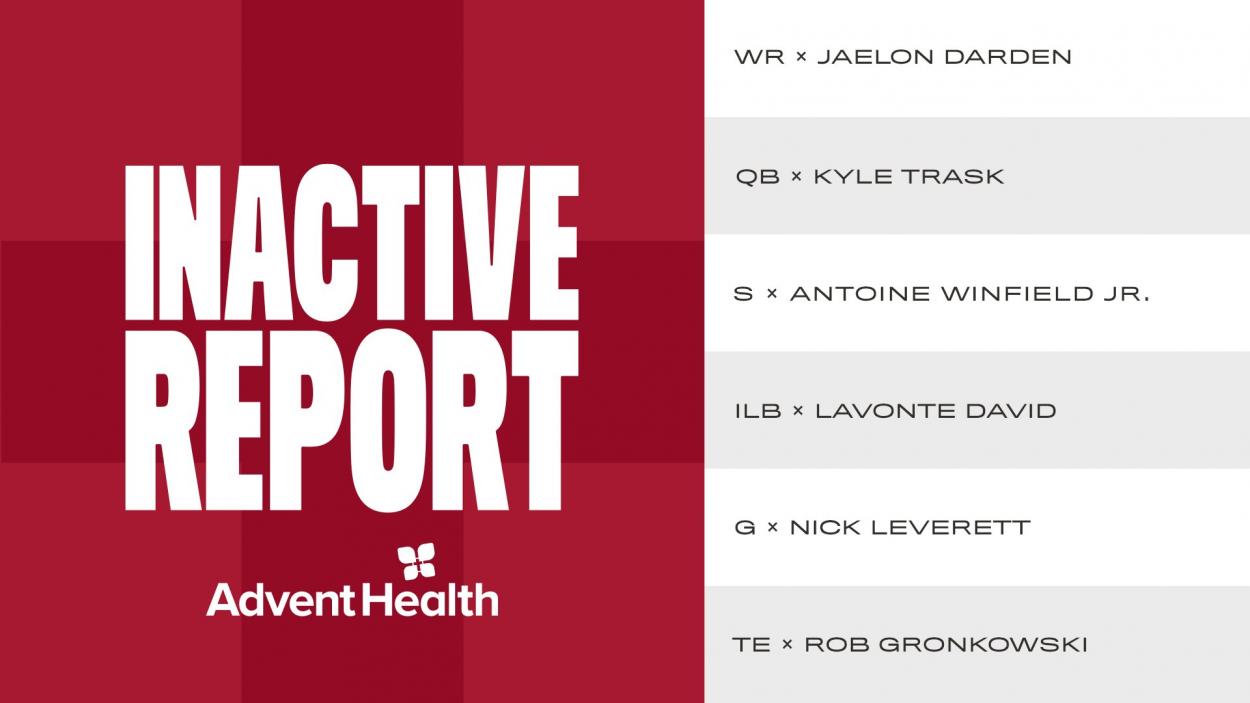 Impressive mood on the court

The Eagles players came out for their pregame warm-up this Thursday Night with an exemplary attitude.

These are the players who will not be active today for the home team. 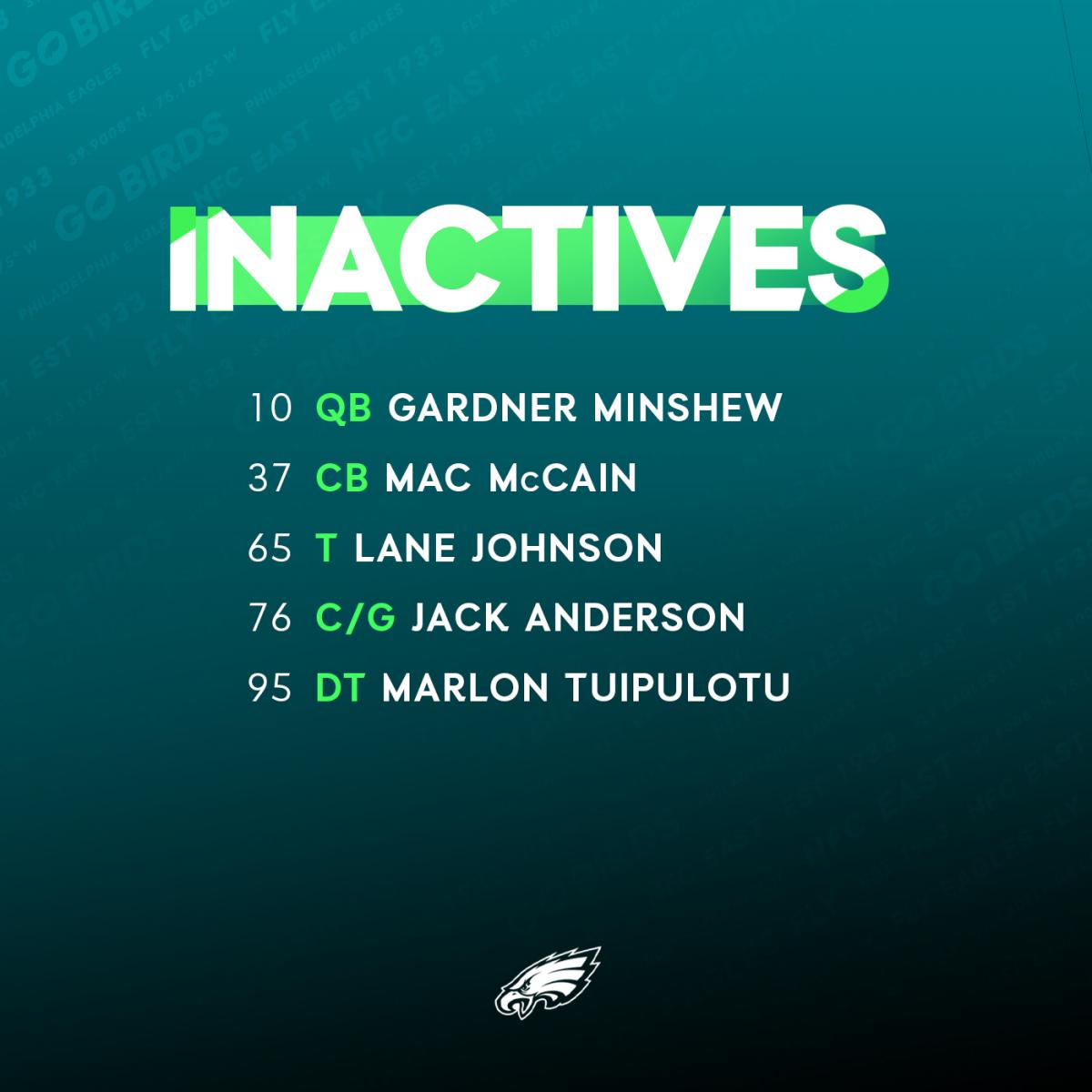 The field in perfect condition 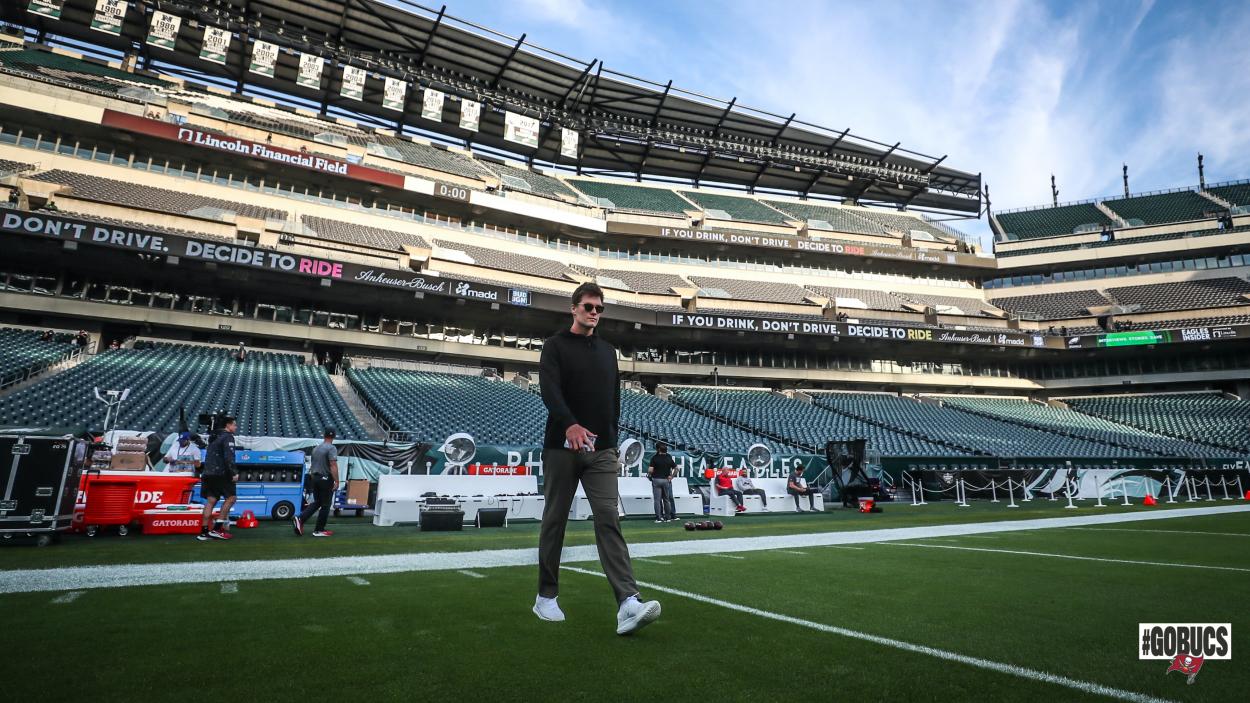 Injuries on the Bucs defense

Injuries have been a constant on Tampa's defense, with cornerbacks Sean Murphy-Bunting and Carlton Davis currently out of action, in addition to safety Antoine Winfield Jr. who is working on concussion protocols.
7:42 PM12 days ago

Over the course of history, the two teams have met a total of 19 times, 10 games have been won by Philadelphia while Tampa Bay has emerged victorious nine times.

Will the Eagles increase their lead or will the Bucs pull even?

The power of Antonio Brown

The Buccaneers wide receiver made NFL history last week, becoming the fastest receiver to reach 900 receptions with a total of 143 games.

The previous record was held by HOF Marvin Harrison at 149 games. 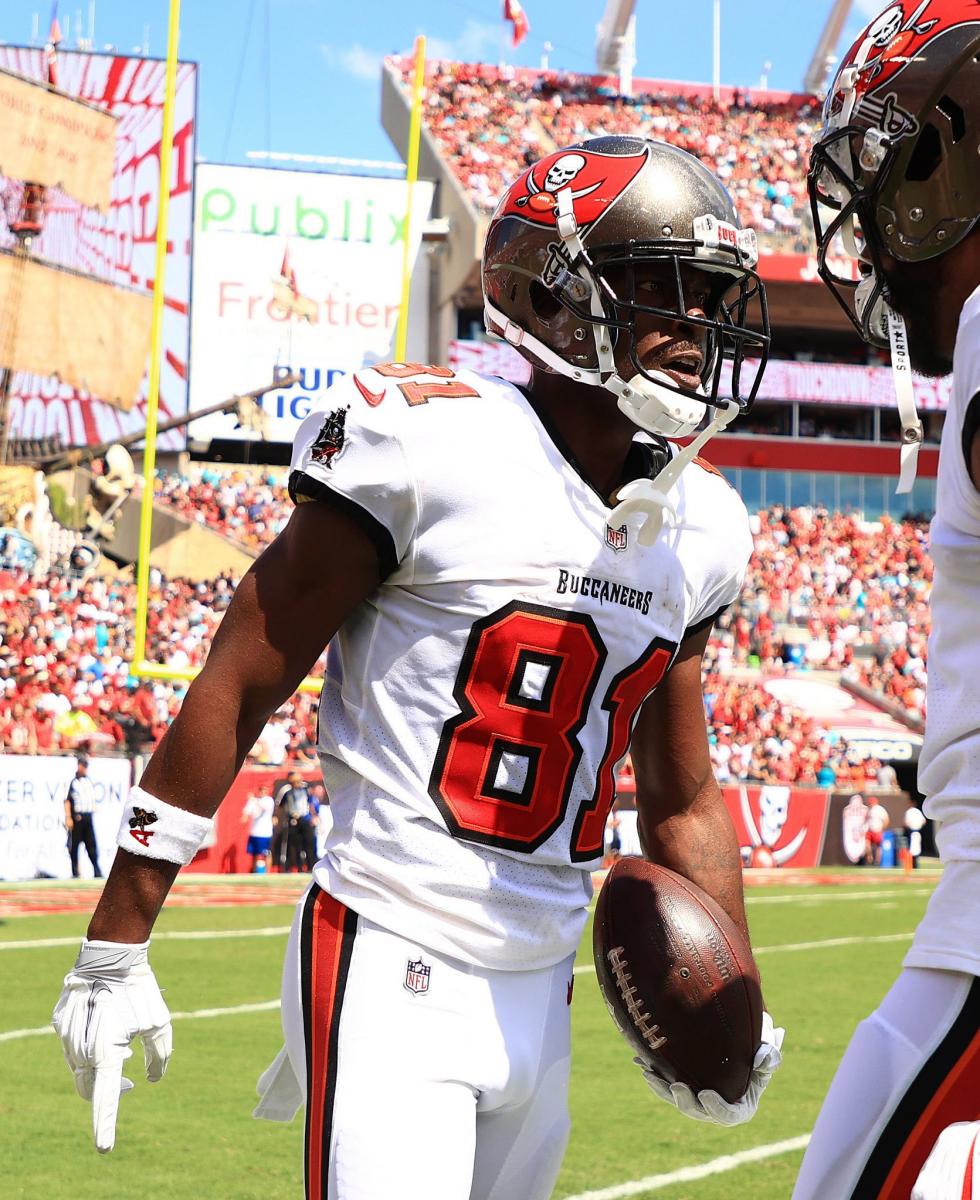 In a few moments we will present you all the details and highlights of the Buccaneers-Eagles game corresponding to week 5 of the NFL.
7:27 PM12 days ago

In a few moments we will present you all the details and the best minute-by-minute coverage of this Thursday Night Football on VAVEL.
7:22 PM12 days ago

Where and how to watch Buccaneers vs Eagles

The match will be broadcasted through Fox Sports and NFL Network.

If you prefer to follow it live online, remember that USA is your best option.

The Tampa Bay team leads the National Conference South with a four-game winning streak and a one-game losing streak, ahead of teams like the Saints, Panthers and Falcons.
7:12 PM12 days ago

This is arguably one of the tightest groups in the NFL this season, and Philadelphia is ranked number three, tied with Washington in percentage and ahead of the Giants.
7:07 PM12 days ago

Leaving aside Tom Brady, who is the Buccaneers' best player, we must also highlight the work of Antonio Brown, who has been a great support for the QB this season.

The veteran is one of the players who has been a great support for the pass rush thanks to his talent to open up space when attacking. 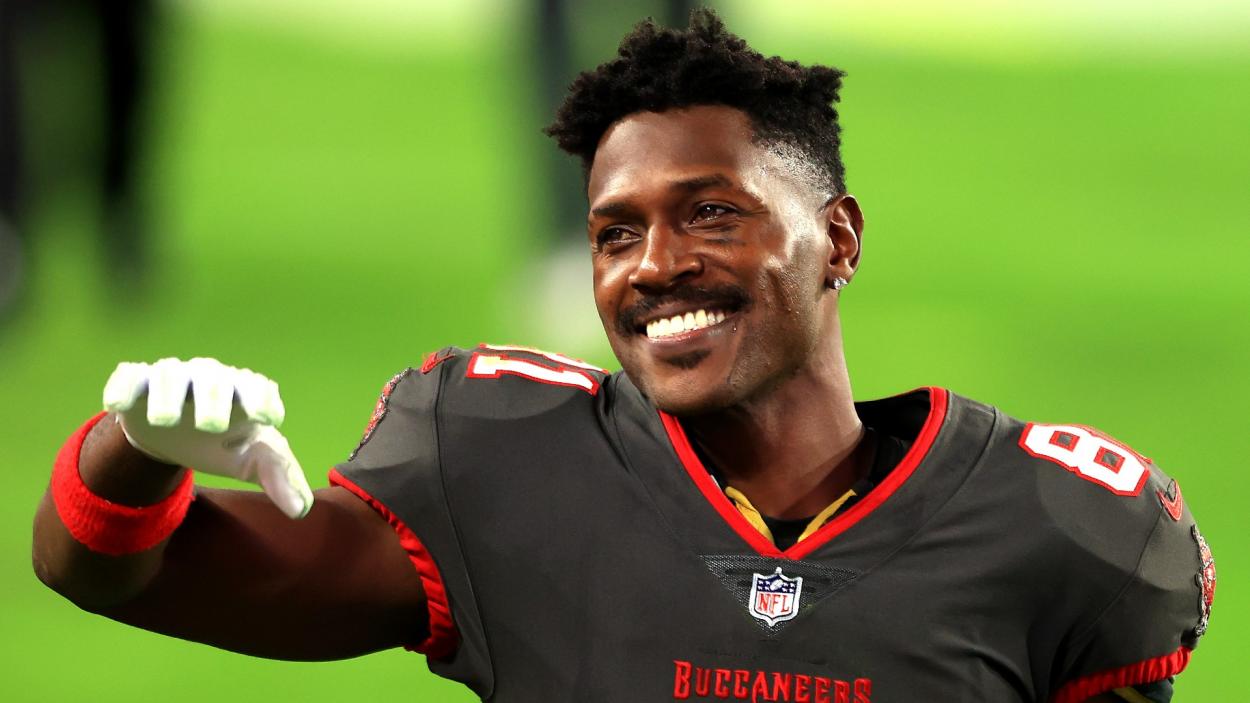 Although Jalen Hurts has not been the best passer this season, the Eagles' junior player has risked his physicality and gained yards for his team.

As in the previous game when he scored two touchdowns on carries, he was a fundamental factor in the victory.

The only team that has been able to beat the Buccaneers was the Los Angeles Rams, in week three, but the rest of the games have been victories for Tom Brady's team.

To reaffirm this we only have to mention the crushing victory of the previous week, which was against the Dolphins with a score that ended 45-17.

Surprisingly, the Philadelphia team defeated the Panthers the previous week, a game in which they arrived as the victim.

And the reality is that it was a pretty even game that they ended up taking with a score thanks to a TD and a two-point conversion in the last quarter.

The match will be played at theLincoln Financial

The Buccaneers vs Eagles match will be played at the Lincoln Financial Field stadium, on Philadephia, USA with a capacity of 67,500 people.

It was inaugurated in 2003 with a soccer match between the European clubs F. C. Barcelona and Manchester United.

Since 2003, the Philadelphia Eagles of the National Football League and the Temple Owls of the NCAA Division I college soccer team have played there.

The Army-Navy college soccer classic is usually played there.

Welcome to VAVEL.com’s coverage of the 2021 NFL match: Buccaneers vs Eagles Live Updates!

A home team with three losses and two wins will host a Buccaneers team that has started off with a pretty good season.
The Tampa Bay team comes in with a 4-1 record, so they will be looking to stay on the same path and at the same time achieve what could be their fifth victory. 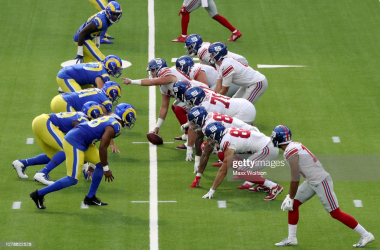