Jake Guentzel, Scott Wilson and Evgeni Malkin scored 3:18 apart early in the third period to break open a 1-1 game to give the Pittsburgh Penguins a 4-1 victory in Game 2 of the Stanley Cup Final.

Even after one period

Vowing to put more pressure on Nashville goaltender Pekka Rinne, the Penguins managed 12 shots in the first period after recording just 12 shots total for the entirety of Game 1. Still, it was the Predators who carried the play through the first 20 minutes and they struck first.

Pontus Aberg beat Pittsburgh defenseman Olli Maatta to a puck in the Penguins zone, passed it through Maatta to himself and then patiently drew goalkeeper Matt Murray out of the net before flipping it by the sprawled goaltender to give the visitors a 1-0 lead. Assists went to Viktor Arvidsson and Mike Fisher.

Guentzel tied the game after jamming a rebound past Rinne from an acute angle. The goal was his 11th, tying him with Jeremy Roenick for most goals by an American-born rookie in a single postseason. Conor Sheary and Chris Kunitz picked up helpers on the goal.

Penguins strike quickly in the third

Just 10 seconds into the final period, Guentzel pounced on the rebound of a Bryan Rust shot and flipped it past Rinne to give Pittsburgh a 2-1 lead. The goal tied the second-fastest from the start of a period in Cup final, only bettered by Montreal's Brian Skrudland against Calgary in the 1986 Finals by one second.

Just 3:03 later, it was 3-1 when the defending champions caught a lucky break for the second straight game as Wilson scored his third of the playoffs when a centering pass caromed off Predators center Vernon Fiddler. Fifteen seconds later, Malkin put the game out of reach when he snapped a wrist shot past Rinne after charging down the left wing. 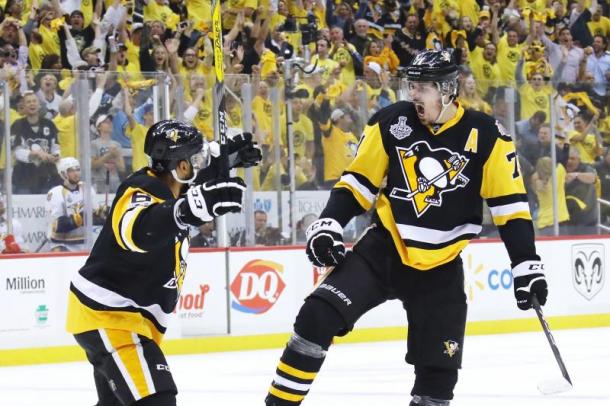 With the game clearly out of reach, Predators coach Peter Laviolette decided to sit his star goaltender for the rest of the contest, replacing him with backup Juuse Saros seeing his first-ever action in the Stanley Cup playoffs.

Following the game, Rinne, who has never beaten the Penguins in nine career games, wasn't concerned about his performance over the first two games: "When you lose a couple games and get pulled, you're not happy about how things went," the Conn Smythe Trophy said.  "But you have to put those things behind and focus on the things you can control and that's Game 3."

Fifty teams have taken a 2-0 lead since the final went to a best-of-seven format in 1939. Of those, 90 percent went on to win the Stanley Cup, including Pittsburgh last season. Boston, in 2011, was the last team to come back from a 2-0 deficit in the Final, rallying to defeat Vancouver in seven games. The Penguins also did it in 2009, losing both games on the road against Detroit.

This was the first time the Predators have lost back-to-back games in the playoffs. Game 3 is Saturday night in Nashville with puck drop scheduled for 8:15 Eastern time.

2021 Stanley Cup playoffs: Maple Leafs dominate Canadiens to even up series 21 days ago

2021 Stanley Cup playoffs: Sorokin leads Islanders past Penguins to even series 21 days ago