The All-Star captain of the Atlantic Division and first selection overall in the 2016 NHL Draft, Auston Matthews has been the center of a discussion amongst the next RFA class for 2019/2020 which promises to be the highest paid in the history of the league.

After the situation with William Nylander who nearly sat out the whole season if not for a contract signed just three minutes before the deadline, the Toronto Maple Leafs currently have a lot of difficult decisions in regards to contracts.

Besides the big star, guys like Mitch Marner, Kasperi Kapanen, and Jake Gardiner are all important pieces of the organization who will require extensions to remain in Toronto for the next season and with a tight salary cap in place, general manager Kyle Dubas will have to make some math magic to keep his core together.

Arizona Coyotes could be a potential destination.

A hometown kid, Matthews has been involved with the Arizona Coyotes since an early age and had no shame in admitting while growing up that his idol was franchise legend, Shane Doan.

His on-ice success has been one of the greatest stories and advertisements for hockey development in the state of Arizona and many could suggest that the Coyotes could use the same card the Leafs played when signing John Tavares. 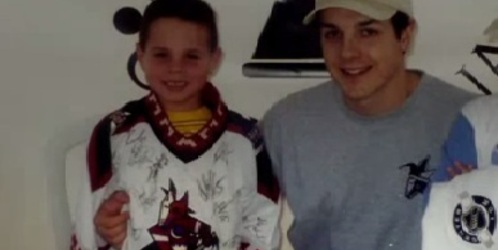 Matthews as a kid with Daniel Briere. (Photo: RadioEGO)

The impact on the salary cap of the Arizona Coyotes could be massive with many other prospects such as Clayton Keller, Nick Schmaltz, and Christian Fischer also requiring extensions in the coming years, but the pros of such acquisitions could be huge.

If many think that hockey doesn't belong in Arizona, this would turn their heads!

A player of Matthews' caliber could be a massive incentive to the fan base of the team in as much that general manager John Chayka has shown so far to have a more conservative role in his moves. It could be a win-win situation for the franchise as Auston would be the big name of the team and it could entice free agents to flock to Arizona just to play with him.

Other teams are also in the hunt.

As much as Arizona would be the team with the most sense in acquiring the player a lot of sources in Canada mention that the Montréal Canadiens could also be in line to be one of the teams to make him an offer July 1st.

With Mitch Marner's point totals rising along with his salary demand, more than likely neither he or Matthews will be signed before the start of the free agency so both as RFA's will be eligible for offer sheets.

Comment in the section below, will Toronto GM Kyle Dubas be able to avoid this and sign both Matthews and Marner before July 1st?

Hurricanes to begin season with no fans a month ago