Kevin Harvick is essentially the king of Phoenix International Raceway. He has won five of the last seven Sprint Cup races there, and has seven career wins at the track, He is also the defending race winner, although he did not sweep last year, as a rainout helped Dale Earnhardt Jr. win the fall race. 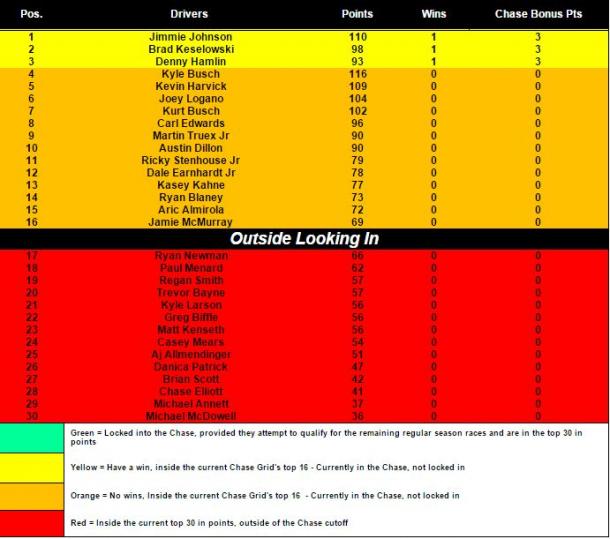 - Kevin Harvick is the overwhelming favorite to win this weekend, and rightfully so, as in addition to seven total wins at Phoenix, he has an average finish at the track of ninth, second best in the series behind only Jimmie Johnson. In addition, he started last year’s race on the pole, which surprisingly was the first time he started on the pole at Phoenix.

- Johnson is the other massive favorite this weekend, as his driver rating at Phoenix is the highest among all active drivers. He also holds the track qualifying record, which he set before the fall race last year.

- While most of the attention is turned towards the series championship, arguably the best race right now is the race to be named rookie of the year. Entering this weekend, Ryan Blaney leads Chase Elliott by seven points. Brian Scott and Chris Buescher are tied for third, with Jeffrey Earnhardt sitting in fifth place.

- One driver who could be a dark horse is Austin Dillon, driver of the Richard Childress Racing #3 car. Dillon has started the season strong, including a fifth place finish at Las Vegas. He is also sitting in 10th in the series points standings. This is his third full-time Sprint Cup season.

- Dillon’s brother, Ty Dillon, will be in the Stewart-Haas Racing #14 car this weekend as Tony Stewart continues to recover from a back injury suffered before the season. This is T. Dillon’s third race this season, and his second in the 14 car. He had one race at Phoenix last season, in which he placed 27th.