The weather was nice on Friday, June 5 for the first practice day, as shown here when Joey Logano made several laps around Pocono Raceway.

Another driver who made some practice runs was Brad Keselowski. Keselowski is shown here qualifying for the Axalta 400 pole on Saturday.

Since Friday's practice was the only session during the weekend, helmets on cars, like Jimmy Johnson's, were a common sight in the garage area.

Drivers like Denny Hamlin had plenty of downtime to check vehicles in their garages.

Kevin Harvick and his crew make checks on their #4 Jimmy John's Chevrolet.

Visibility was low at Pocono Raceway and the weather was not cooperating with the original Sunday race time. 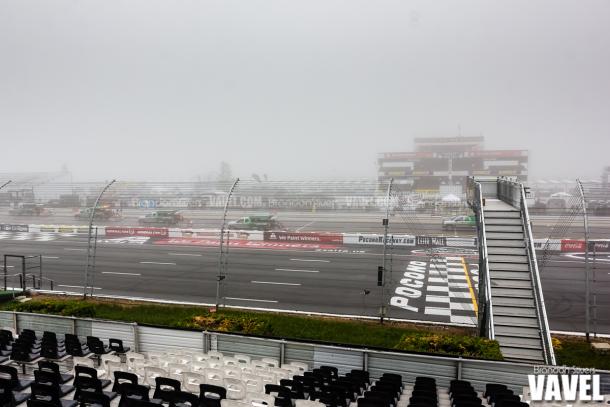 Fans braved the rain and fog and took advantage of the extra time to walk pit road on Sunday. 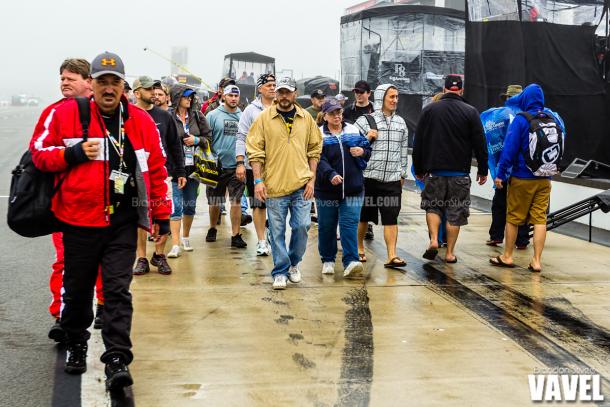 On Monday morning, the sun rose above the Pocono Raceway garage area with clear skies. 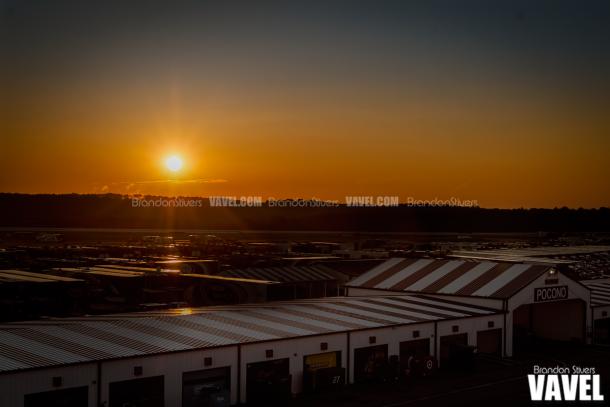 Pierre Kuettel, car chief for Clint Boywer, rests alongside his #15 Visine Chevrolet prior to the green flag.

Pocono Raceway's mascot Tricky makes an appearance prior to the drivers' introduction.

A Pocono Raceway firefighter rests alongside a support vehicle prior to the green flag.

Danica Patrick's helmet sits atop her vehicle as she and her crew wait on pit road for the green flag.

Dale Earnhardt Jr. smiles at fans who walk pit road prior to the race.

IndyCar driver Marco Andretti talks with Tony Stewart on pit road prior to the green flag.

A U.S. Air Force plane makes a fly-over over the Pocono Raceway prior to the start of the race.

Dale Earnhardt Jr. adjusts his helmet in preparation for the green flag.

Greg Biffle and Kyle Larson race side by side early in the race. Larson qualified 21st while Biffle started 15th.

Pole-sitter Brad Keselowski finds himself alone on the track early in the race.

Ryan Newman tries to make a pass on the inside of Kasey Kahne during the race.

Jeb Burton tries to hold off the #43 car of Aric Almirola.

Fans sit atop of their camper for a better view of the track.

A fan listens to a scanner feed through his headphones while he watches the race.

Joey Logano makes a pit stop midway through the race.

Brad Keselowski stops at his pit stall sideways. In his previous stop, he took an illegal body modification penalty.

Rookie Brian Scott returns to the track from the garage area after crash repairs.

Jimmy Johnson's Crew watches the front stretch from their booth on pit road.

A Danica Patrick crewmember looks over repairs from a crash with Tony Stewart.

Jimmy Johnson's crew pushes his car back to the garage area after a crash.

Kurt Busch tries to pass Dale Earnhardt Jr. on a green flag restart late in the race. They were running #1 and #2 at the time. Busch eventually made the pass and led the final few laps.

Kurt Busch runs the final laps of the Axalta 400 in front of the field.

Dale Earnhardt Jr. runs alone in 2nd with only a few laps to go in the Axalta 400.

Kurt Busch entertains the race fans with a burnout in celebration of his Axalta 400 win.

Sprint Cup will be at Michigan International Speedway for the Firekeepers Casino 400 June 10th through 12th.