We thank you for your attention during the broadcast of the first ever Saudi Arabian Grand Prix. To stay up to date with Formula 1, stay tuned to VAVEL.com.

We look forward to seeing you at the last race of 2021, at the Abu Dhabi Grand Prix.

Lewis Hamilton and Max Verstappen are tied on points for the Drivers' Championship with 369.5 points.

IT'S ALL TO BE DECIDED IN ABU DHABI!

The world champion is the first Saudi Arabian Grand Prix winner in history and will fight for the championship in the final race in Abu Dhabi.
2:39 PMa year ago

With Lewis Hamilton in the lead, we come to the final lap of the 2021 Saudi Arabian Grand Prix.
2:38 PMa year ago

Sebastian Vettel retires from the race. He suffered multiple touches throughout his race with the Aston Martin.
2:30 PMa year ago

Race control imposes a +5 second penalty on Max Verstappen for running off the track in a dangerous action while overtaking Lewis Hamilton on lap 37.
2:29 PMa year ago

MAX VERSTAPPEN LETS HAMILTON PASS TO AVOID A PENALTY FOR THE PAST ACTION.

BUT OVERTAKES THE BRITON AGAIN

THERE WILL BE AN INVESTIGATION INTO THE ACTION

The track is green flagged and everything is back to normal.
2:07 PMa year ago

There are strange elements on the track that generate discomfort in some drivers.

Yuki Tsunoda receives a +5 second penalty for the incident he had with Sebastian Vettel. The Japanese AlphaTauri driver was forced to change the nose of his car.
1:59 PMa year ago

The race is normalized and DRS can now be used
1:58 PMa year ago

Yuki Tsunoda collided with Sebastian Vettel and the virtual safety car is activated.
1:56 PMa year ago

Yuki Tsunoda crashes the front of his AlphaTauri and race control brings out the yellow flag.
1:53 PMa year ago

The fight for the first place is totally exciting.

Verstappen is the leader of the race and has a +1.107 lead over Hamilton.

GREAT START BY VERSTAPPEN, OVERTAKING HAMILTON AND OCON AT TURN ONE.

The race will be relaunched again

After the completion of the second suspension, the Saudi Arabian Grand Prix will be relaunched.
1:31 PMa year ago

Due to the new accidents, the race control again raises the red flag and the session is suspended momentarily for the second time.
1:22 PMa year ago

ALL SET TO RELAUNCH THE RACE

In less than five minutes the race will restart in Saudi Arabia
1:08 PMa year ago

The track marshals continue to fix the barrier 🟥

Fortunately, the HAAS driver is fine and was able to get out of the car under his own power. The red flag remains in place.
1:00 PMa year ago

Carlos Sainz overtook Antonio Giovinazzi on the main straight. With the presence of the safety car on track, overtaking is prohibited. The Ferrari driver could be the victim of a penalty.
12:52 PMa year ago

DRIVERS ENTER THE PIT LANE TO CHANGE THEIR COMPOUNDS, EXCEPT MAX VERSTAPPEN WHO STAYS ON TRACK AND NOW LEADS THE SAUDI ARABIAN GRAND PRIX.
12:51 PMa year ago

MICK SCHUMACHER CRASHED HIS HAAS AND THERE IS A YELLOW FLAG.

THE SAFETY CAR COMES OUT

RICCIARDO OVERTAKES GASLY ON THE MAIN STRAIGHT AND IS NOW IN EIGHTH PLACE
12:46 PMa year ago

Daniel Ricciardo attacks Pierre Gasly and threatens to overtake him in eighth position. The Frenchman from AphaTauri is only +0.598 behind the McLaren.
12:43 PMa year ago

The rest of the grid took to the track on the medium tires.

Race control determines that a touching incident that occurred on the first lap of turn seven between Tsunoda and Stroll does not merit investigation.

The top five positions remain intact. Gasly offered an advantage and lost the position to Esteban Ocon.
12:35 PMa year ago

Lewis Hamilton starts very well and keeps the first position. Bottas is second and Verstappen doesn't take off because of the Finn's overtaking.
12:30 PMa year ago

Ahead of lights out, the whole paddock comes together to celebrate a true legend of Formula 1

Drivers, team members and world champions stand together for a minute of silence for the one and only Sir Frank Williams ❤️#F1 pic.twitter.com/Df6vCCPZm0 — Formula 1 (@F1) December 5, 2021

For now the top three are:

Hamilton scores a bad first sector in his bid for pole. Nearly spun at turn eight
12:48 PMa year ago

The last phase of the qualifying that will define the pole position starts. Hamilton and Lando Norris start
12:42 PMa year ago

Carlos Sainz spins with his Ferrari and nearly crashes his car
12:30 PMa year ago

Most of the drivers take to the track on the medium tire. Only Williams' George Russell uses the soft tire, which is the fastest of them all.
12:26 PMa year ago

The second phase of the qualification begins. At the end of this one, we will have five new eliminated players
12:21 PMa year ago

There is a lot of traffic on the track. Blind curves make it impossible to set a clean record.
12:17 PMa year ago

For now, the eliminated pilots are:

All drivers are using the soft tires. It is the fastest compound
12:09 PMa year ago

Qualifying for the Saudi Arabian Grand Prix to begin in less than an hour
11:54 AMa year ago 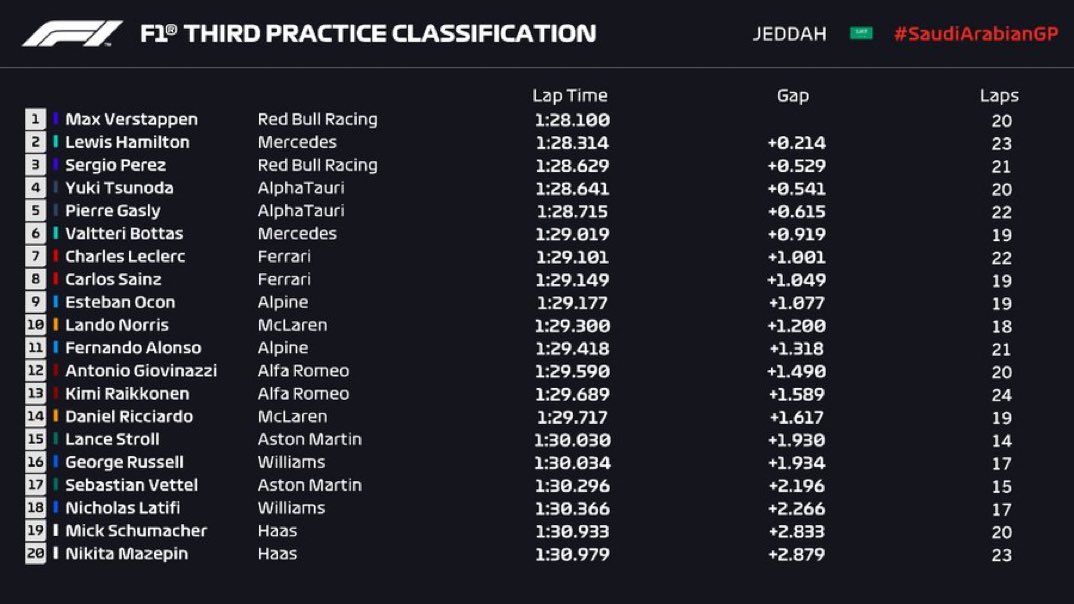 Don't miss a single detail of the Formula 1 Saudi Arabian GP qualifying and race with live updates and commentary from VAVEL.com Follow all the details, commentary, analysis and standings with us.
12:24 AMa year ago

How to watch the Saudi Arabian Grand Prix live?

If you want to watch it online, VAVEL US is your best option.

What time is the Saudi Arabian GP?

The fiery battle for the drivers' title

The Jeddah circuit arrives with its urban identity, but with a complicated layout for the drivers. As it is a street circuit, there are almost no run-off areas in the corners. Given the complexity of the track, the barriers are very close, forcing the cars to be as careful as possible. During free practice two, Charles Leclerc was involved in an accident at turn 22, wrecking his Ferrari FS21. Each driver will have to exercise caution between turns 17 and 22, as this is where the first DRS zone is located, which has small corners and blind spots.
11:49 PMa year ago

Like Qatar's Losail International Circuit, the Jeddah Corniche Circuit will make its debut in the Formula 1 World Championship. This track is new, having been inaugurated in 2021. It is an urban layout of 6.174 kilometers where on race day we will have a total of 50 laps that will define the first winner of the Saudi Arabian Grand Prix in the history of the category. There will be three DRS zones that will make overtaking possible.

Hello everyone! Welcome to VAVEL.com's coverage of the Saudi Arabian Grand Prix in the 2021 Formula 1 season.

My name is Esteban Monsalve and I will be your host for this broadcast. We will be bringing you pre-grand prix analysis, qualifying updates, race updates and live news here on VAVEL.com.