Excluding the European sides, only seven countries made four consecutive FIFA World Cups from 1998 to 2010. Of those seven, three from South America include the five time world champions Brazil and two time world champions Argentina. Yet there is one country that has been part of that success that not many people talk about and that's the country right in the heart of South America: Paraguay.

Paraguay made four consecutive World Cups from 1998-2010, having had their best performance in South Africa reaching the quarterfinals only to lose to eventual champions, Spain. The following year, Paraguay under Gerardo Martino achieved a feat that has never been achieved in the 99-year history of the Copa America and that was go a final without winning a single game as Paraguay drew all their matches in 2011 with Ecuador, Brazil and Venezuela in the group stages. Then going 0-0 in the knockout stage against Brazil and Venezuela as they went 120 minutes scoreless before winning on penalties by then getting trashed in the final against Uruguay 3-0 from goals by Luis Suarez and Diego Forlan.

Following the resignation of Martino, in the qualifying rounds for Brazil 2014, La Albirroja hit an all time low. In a spell of three coaches (Francisco Arce, Gerardo Pelusso and Victor Genes) La Abirroja got three wins, three draws and ten losses for a total of 18 points out of 16 matches. Historical lows such as the first loss to Argentina since 1996 and the first ever loss in Paraguay against Venezuela as they did not qualifying to their fifth straight FIFA World Cup missing out yet again to a World Cup on their own continent.

Not much has changed in four years, when Ramon Diaz took charge of this side back in December with the plan that this Copa America becoming a test for the upcoming set of World Cup qualifiers for Russia 2018 later in the fall. The final 23 man squad that was chosen had ten players from the squad back in 2011 under former coach and current Argentina boss Gerardo ''Tata'' Martino. For starters, goalkeeper Justo Villar will playing in his sixth Copa America tournament while captain and current Cruz Azul player Roque Santa Cruz will be playing in his fourth. This squad does have some new faces with Derlis Gonzalez of FC Basel as well as Oscar Romero from Racing Club in Argentina and Nelson Haedo Valdez and Raul Bobadilla from Eintracht Frankfurt and Augsburg of the Bundesliga.

There are three players in their squad who have more than 100 caps: Villar with 107, centre-back Paulo da Silva with 120 and Santa Cruz with 104. There are eight members of the squad have fewer than 10 caps and Bruno Valdez of Cerro Porteño is the only uncapped outfielder.

While the impact of Santa Cruz, Haedo Valdez and Lucas Barrios can make an impact, their midfield can as well with Toluca's Richard Ortiz becomes a key factor in the midfield as a versatile performer, while Gonzalez can be the one to watch on this Paraguayan side with his pace, tricks and ability to become a poacher as a clinical finisher shows that he is an outlet on the counter when taking on strong opposition.

In Diaz's first three matches as manager, he drew Costa Rica 0-0 in San Jose, lost to Mexico 1-0 in Kansas City, and drew Honduras in their final tune up game 2-2 in Asuncion from a Roque Santa Cruz ''hat trick'', as he scored a brace for the home side and an own goal for Honduras.

Their lineup will mostly consist of this:

Paraguay's history in the Copa America saw them champions twice: 1953 & 1979. They were runners-up six times, the most recent in 2011 and made the last four on 13 occassions. 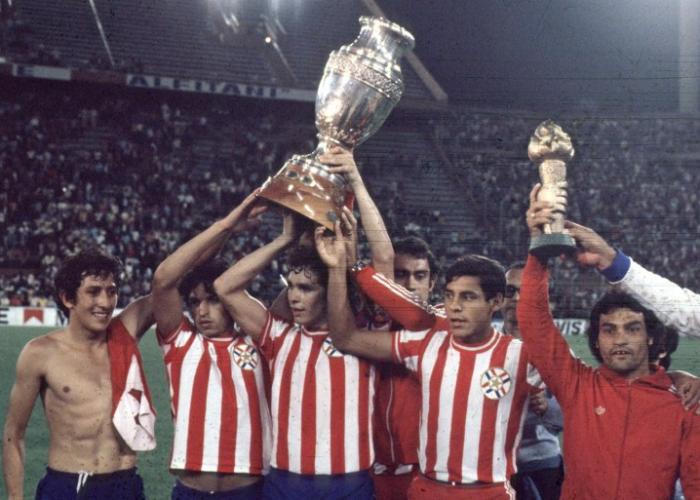 Leading up to the fixtures, Paraguay will face their first rival and their biggest one, Argentina, in La Serena for what surely is there most imporant matchup as they take on Messi and company. They will then travel to Antofagasta to take on the island of Jamaica in what surely is a must win if the match against Argentina goes badly before traveling back to La Serena to take on historical rivals Uruguay in an effort to make it out of the groups.

Prediction: While this writer does have my doubts as a Paraguayan supporter, he is on the fence for this. Roberto Rojas believes that a result against Uruguay and Jamaica will be needed to have any chance of Paraguay getting out to the quarterfinals as the runners-up, if not at worst as one of best third place teams in the Copa America. A result against Argentina would be monumental for this side. So as the old song by Argentine rock band Kapanga goes ''Muchachos no pierde la esperanza, Ramón ya esta por llegar!'' (Guys, let's not lose hope because Ramon is coming!)

Derlis Gonzalez will be a key player for this national team going forward. He's quick, which is someone that we need. He has a lot of ability, very decisive and has a great personality.''- Journalist Juan Eduardo Bernabe of Radio Primero de Marzo 780 AM in Paraguay

''The national team have been punching above their weight for sometime because not only did they make four consecutive World Cups, they were never ever easily beaten in big tournaments. You have to renew though and Martino saw that when they runned out of steam and felt that the tournament was a failure, so he immediately resigned. He knew the process of rebuidling would be painful. When the promising yet inexperienced Arce came in shortly after the Copa, he tried to chance too quickly and Paraguay paid the penalty. I think Paraguay can be clearly competitive again in the future. I especially like Oscar Romero, who is very talented.

''I think Ramon Diaz was a strange choice given he hasn't had many connections with Paraguayan soccer. I suppose you're thinking there that everything went right for Martino, that was an Argentine coach who comes from a football background who wants to play football but Martino started the Copa America in 2007 in disaster as he tried to move too quickly, with that very heavy defeat against Mexico (6-0), and knew he had to be pragmatic and that was the secret of the good years of Martino's time. Ramon Diaz in comparison, what he doesn't have is the history in Paraguayan club football that Martino had. Which means if he gets off to a bad start, it might be harder for him to change things around.''- South American football correspondent Tim Vickery of BBC Sport