One of the best coaches in international soccer is now looking for a job.

Norio Sasaki, the head coach of Japan’s women’s national soccer team for the past eight years, informed the media following the completion of the Asian Olympic Qualifying Tournament that he would no longer be the coach of the team moving forward.

“I’m taking all offers,” Sasaki said. “I’ll be looking for a new job in a few days so I’ll consider a wide range of options in moving on to the next stage. I take my job as national coach very seriously and if the results aren’t there, you have to take the responsibility. Had we qualified, I was hoping to work a little Norio magic to win us a gold medal in Rio, but I couldn’t work the magic even in qualifying. But what I can say is that each and every player has to be more accurate. Otherwise, given how competitive it’s getting on the world stage, we won’t stand a chance.”

Despite leaving the team, Sasaki made it clear that he remains a fan of the players, and that he will be following their progress.

“Wherever I’ll be, I know I’ll be really concerned about how the team is doing. I’ll always be interested in the future of women’s football so I’ll be rooting for them.”

Talks of distractions and infighting among the team made its way throughout the media, and Sasaki was quick to defend his players before stepping down.

“It’s a little disappointing to see some of the stuff I read. I don’t mind people criticizing me, but it seems like when we lose, it’s all gossip about who said this or that inside the team,” Sasaki said.

“Sorry but when I think about what the players have to endure, this is something I have to say.”

Sasaki would not elaborate whether or not it was his decision to step down, or if he was being let go. The Japanese Football Association has refused to comment and is unlikely to do so.

The team was able to give Sasaki a going away present with a 1-0 victory over North Korea in the final game of the tournament. Mana Iwabuchi came off the bench and scored in the 80th minute.

“We wanted to end with a win,” said Iwabuchi. “It was good to score a goal.”

Japan ended the tournament with two wins, two losses, and one draw.

Given his success with the national team, Sasaki will unlikely be unemployed for long. He will likely find a job in Japan's J1 League, but given his influence on women's soccer in Japan, he would make a huge splash if he took over a team in the Japan Women's Football League. 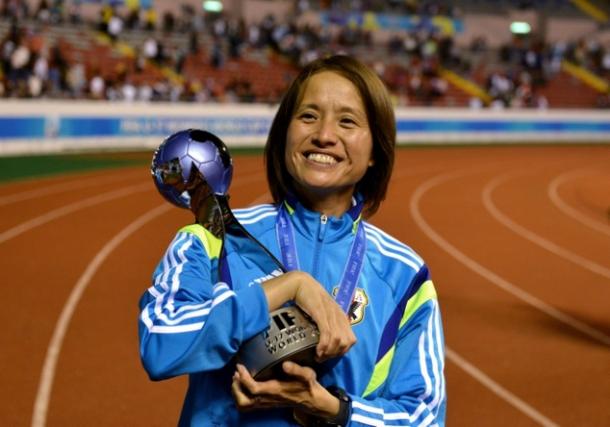 The list of coaches to replace Sasaki appears to begin and end with Asako Takakura, the coach of the Japan’s U-19 Women’s Team. Takakura is a four time AFC Women’s Coach Of The Year, including last year, when she lead Japan to a victory at the AFC U-19 Women’s Championship. Takakura also played for national team, competing in the 1991 and 1995 FIFA Women’s World Cup, as well as the 1996 Olympics in Atlanta.

The 47 year old is expected to give a boost to the team as they gear up to host the Olympics in four years. She won’t have much of a learning curve - Takakura has been with the national program since 2007, including serving as a Challenge Project coach in 2009. Many of the players she has coached over the years are expected to make Nadeshiko, giving Takakura the advantage of having familiarity with her players weaknesses and strengths.