The Los Angeles Galaxy survived a scare from the Portland Timbers on Sunday at the StubHub Center with a 1-1 draw.

For the second consecutive game LA was in complete control of the tempo. Their offense was able to produce 13 chances. However, in the end it was an own-goal from Timbers center back Nat Borchers late on that spared the Galaxy another embarrassing home defeat to Portland.

Both clubs failed to move up the standings as they shared a point apiece. Los Angeles stayed in fourth place with eight points and have four goal differential. The defending MLS Cup Champions are still in ninth place and now have five points with a negative three goal differential. For both of these clubs there is still a lot of improvement to be desired.

Brian Rowe (7): The 27-year-old keeper put in another solid shift and ended the game with a save to his name. Rowe was not at fault for Fanendo Adi’s goal. The Nigerian striker just placed the ball perfectly with power at the bottom right hand corner.

Ashley Cole (6): The former English international had a quiet game on the offensive side. However, he did not make any mistakes on the defensive end.

Daniel Steres (6): He put in a good defensive performance, the few times he was tested in the match. 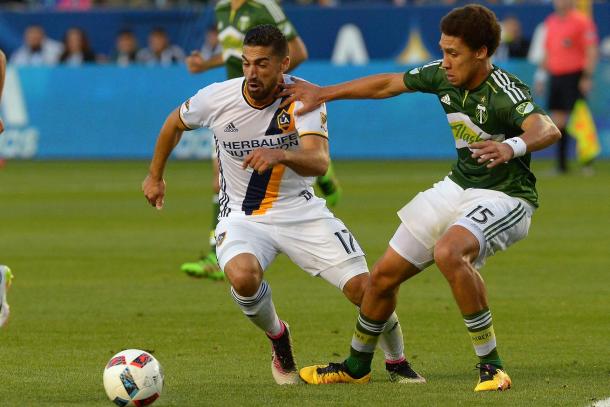 Jelle Van Damme (6): Similar to Cole, Van Damme did not make that much of an impact on the offense. However, he was his usual self on the defensive side. The former Belgium international made key tackles, broke up plays and intercepted multiple passes.

Robbie Rogers (5): In the few minutes he played before he was subbed off at the eight minute due to a hip contusion, Rogers appeared to be having his typical busy shift on the right hand side.

Baggio Husidic (6): Did not complete too many dangerous passes in the final third. However, the Bosnia and Herzegovina native did not lose the ball in key areas as well. The Galaxy’s midfield won the battle of possession early in the match. As a result, Husidic and company were in control of the tempo.

Mike Magee (5): Similar to Husidic, Magee attempted to create dangerous chances in the penalty box but nothing came from them. He gave a lot of effort in the match but was lacking his usual clean killer touch in the box. 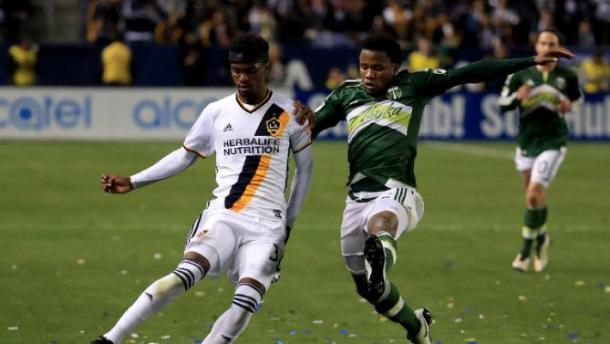 Nigel De Jong (2): The only reason why he receives a two is because he did control the midfield and made the Timbers a nonfactor for the majority of the game. If it was not for that then the former Dutch international would have finished the match with a zero due to the harsh, dirty tackle on Darlington Nagbe.

Sebastian Lletget (6): The San Francisco native kept on pushing and searching for a breakthrough in the match. However, he and the rest of the Galaxy players failed to convert their opportunities in the final third. 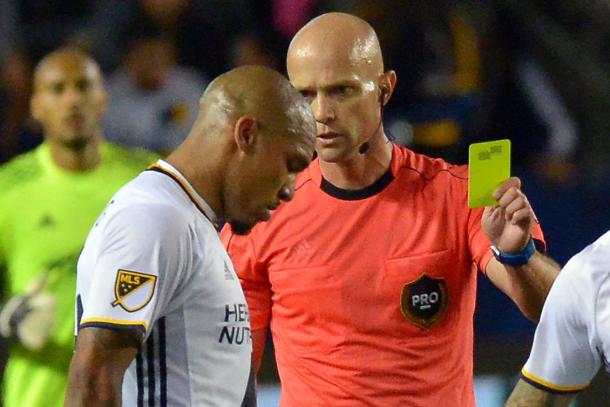 Giovani Dos Santos (4): The Mexican playmaker was rusty and botched multiple set pieces and other goal scoring opportunities. Dos Santos also struggled to keep up as the game carried on, it came as no surprise that he was subbed out in the 64th minute.

Gyasi Zardes (7): The U.S. international was a pest for Portland in the match. He made key runs that forced the defense to foul him. By the end of the match his creativity had drawn three fouls. Zardes was also able to get off three shots in the match, and he placed two of them on target. However, Timbers’ goalie Adam Kwarasey was there to stop him; the Ghanaian international ended the match with four saves.

Rafael Garcia (7) entered the match in the eighth minute for Rogers: Garcia made his first appearance for the Galaxy in a regular season match since August 23rd of last year. The five-foot-six-inches midfielder was thrown into the game early for the injured Rogers. He was placed as a right back a position that is not natural to him.

However, that did not faze him as he logged in a strong performance for the 82 minutes he played. Garcia was able to stand his ground against Nagbe, Diego Valeri and Lucas Melano. The 27-year-old midfielder was at fault for Portland’s goal, since he failed to close out Adi’s angle. He was still able to perform beyond expectations as a right back. 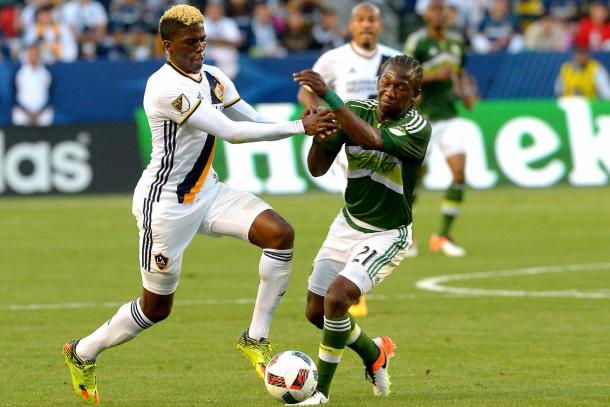 Bradford Jamieson IV (5) entered the match in the 64th minute for Dos Santos: His pace did provide LA with a brief spark. However, as the game went on the 19-year-old forward speed did not impact the match. The former U.S. under-20 international failed to even register a single attempt on goal. He did continue to run endlessly until the game ended.

Alan Gordon (4) entered the match in the 82nd minute for Husidic: Similar to Jamieson, Gordon was not able to generate any dangerous chances. There were not a lot of crosses delivered in the game for the Long Beach native to get his head on. If the MLS journey man is not provided with crosses then he becomes a man on island.

Bruce Arena (5): He took some risks and had different results for them. First the decision to start Dos Santos was a gamble and it did not pay off. The Mexican playmaker had not played since the season opener against D.C. United on March sixth at the StubHub Center. Due to an injury he was only able to play 45 minutes in that game and on Sunday he participated in his second match of the season.

This match was the fifth of the season for LA, which means his form is not up to par with the rest of his teammates or the league. So why in the world did he start the match? Having a player of Dos Santos' talents back is great but throwing him out there is not the answer. Bringing him of the bench would have provided an instant spark for LA. With tired legs guarding the pre-season form Dos Santos he might have been able to make more of an impact.

The Garcia decision was as fortunate as an amateur magician actually pulling out a rabbit from a hat on the first attempt. However, he was forced to do this decision since veteran defender A.J. DeLaGarza was out with an injury and there was no one else on the bench but center back Dave Romney. However, at the end he took a gamble and it paid off and he looked like a genius, until Arena brought in Gordon to save the day.

Gordon will always hustle and chase for loose balls in the penalty box. However, he will never be full affective unless someone is providing crosses in the box. Nobody was providing accurate crosses for the Galaxy in the match.

By the end of the night, LA managed to send in 37 passes into the box but only 24 percent of them were completed. It was clear that the game was calling for a change but not for Gordon. Maybe a speedy Emmanuel Boateng or giving the youngster Ariel Lassiter another chance might have been the better choice.

However, the game is done and lights have been turned off and the Galaxy will now have to rebound quickly as their next match is on Friday. Los Angeles will be traveling to Texas to face the Houston Dynamo at the BBVA Compass Stadium.