The biggest upset of the tournament so far, Uruguay is unofficially eliminated from Copa America. If Mexico tie or win tonight, Uruguay will be officially out. Stay tuned on VAVEL USA for complete post match coverage from the team's. From Philadelphia, I'm Josef Leizerowitz, signing off.

90+' MISS! With Muslera in the opposing box, Venezuela misses the empty goal from midfield.

90' WIDE! Cavani was alone at the penalty spot and misses wide.

86' Maxi Pereira's cross is taken in the air by Angel.

85' A scrum insues after a hard challange in the Uruguayn half.

80' Substitution: A. Gonzalez off for Corujo (URU)

77' Substitutions: Salomon Rondon off for Luis Seijas (VEN), Lodeiro on for Carlos Sanchez (URU), Figuera off for Suarez (VEN)

69' Maxi Pereira's shot from the top of the box is just high.

68' Penaranda is in one on one, but Muslera saves!

63' Uruguay have started the half with much more urgency than in the first. They have had the majority of the possession.

56' Gaston Silva's shot attempt is over the bar.

53' Stuani's turn and shoot off a corner kick is just wide.

51' Carlos Sanchez blasts a striker over the Ben Franklin Bridge.

48' Gaston Ramirez's volley is just high and wide of the left post.

47' Cavani blasts a free kick into the wall.

46' Second half underway in Philadelphia

45' One minute added to the end of the first half.

43' Guerra with some incredible skill to go one on one, but his shot from the top of the box is saved.

39' Well deserved goal for Venezuela, they had been defending well with great purpose in the attack.

36' GOL VENEZUELA! Figeura's shot from WAY downtown hits the bar as he had caught Muslera off his line, and Rondon puts the ball in the back of the net.

34' Nice sequence for Uruguay, Cavani's tip at the end of a Maxi cross being saved. Linesman had ruled it offside as well.

31' Close! Cavani just can't get to the end of a great free kick ball.

28' Rondon and Penaranda's nice one-two is cleared out by Gaston Silva.

24' Free kick awarded to Uruguay on the right flank. The kick is headed out to saftey.

23' Salomon Rondon and the keeper collide in the box, but they both miss the ball as it goes out for a goal kick.

21' Uruguay starting to keep the ball in La Vinotinto's half, but their play in the final third has been rough.

15' Swing and a miss! Cavani had been set up at the top of the box, but he misses most of the ball.

12' Uruguay finally starting to string some passes together, allowing them to find space in Venezuela's half.

7' After trying to play on, Rosales is once again on the ground. Looks like a substitution is coming.

5' Roberto Rosales in pain as he withers on the ground. The injury looked serious but it appears he will play on.

3' Venezuela taking it to Uruguay early on, but the Uruguayans have absorbed all the pressure so far.

1' Early chance for Peneranda, but his kick in the box is blocked for a corner.

Anthems have been sung, and kick off is next...

The teams are making their way on to the pitch now for anthems. Kick off is minutes away! 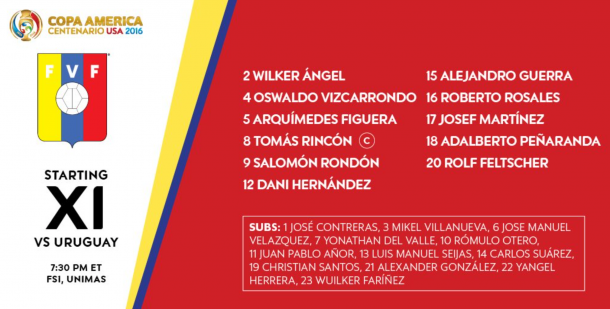 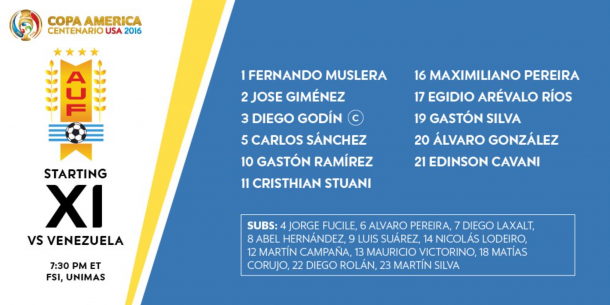 In place here in Philadelphia, Uruguay and Venezuela on the field for prematch warmups.

There has been a lot of talk about the inconsistencies of the Venezuelan team and although they beat Jamaica, that talk didn’t go away. This will be the real test for them to see if they can possibly compete with the best of South America. They were lucky enough to see a Jamaican backline that looked out of sorts without Wes Morgan at the back. They scored early, rattled their opposition and cruised for the rest of the game. The duo of Josef Martinez and Salomon Rondon played well and caused problems for Jamaica all game. They will have to play well for Venezuela to get a point. It will be tough with the likes of Diego Godin manning the backline but they were exposed against Mexico. Venezuela could take advantage of the fact that Rondon will be matched up against Godin and will have a huge height advantage but it will be tough regardless considering Godin is the best centre back in the world at the moment.

Venezuela got off to a flying start in their opening game in Copa America Centenario. Against Jamaica, this was a perfect opportunity for Venezuela to get three points and have a chance at reaching the knockout stages. In a group such as this, three points were crucial from this game. They got off to a good start when Josef Martinez slotted home a goal in the 15th minute. It got even better when Jamaica when down to 10 men. It was a comfortable second half for Venezuela as they grabbed all three points. They aren’t expected to make it out of the group stage but just like last year, they got a great result in their first game. Now, they have to continue that consistency.

Suarez is the talisman for Uruguay. Everything offensively clicks because of his play and his knack for being in the right place at the right time. He is the best player on the team and they are a totally different side when he is on the pitch. He proved his worth in the past two international tournaments as Uruguay looked out of sorts in Copa America last year. In the 2014 World Cup, he came back and helped Uruguay win their last two games of the group stage before being banned for another biting incident. He has looked like he has cleaned up his actions and now it is just a matter of health. Suarez is dealing with a hamstring issue that he suffered in FC Barcelona’s Copa Del Rey final against Sevilla. Suarez has not played since but looks to be on the road for recovery. He was training when the team trained in Philadelphia and looked pretty good when out on the pitch. If Suarez is fit for Uruguay, it is a big boost for the side.

Just like in the 2014 World Cup, Uruguay lost their opening match, a 3-1 loss to Costa Rica, so they have been in this position before. They qualified for the knockouts in that tournament and they certainly can do it in this one. But this will also depend on the health of striker Luis Suarez, who didn’t play in their last match.

Uruguay come into this game knowing that this is a must win for them. A draw wouldn’t be the worst but a loss certainly eliminates them from reaching the knockout stages. After a quarterfinal exit in last year’s Copa America, a group stage would honestly be embarrassing. They were beaten by Mexico on Sunday 3-1 in what was a chance for Uruguay to gain a strong foothold in the group. After giving up an own goal, the fastest in Copa America history, and going down a man in the first half, captain Diego Godin equalized for Los Charruas. But two late goals, including a stunner by Mexican captain Rafa Marquez, took the game away from Uruguay. But it’s not all bad for Uruguay as the game against Mexico was the toughest game for them in the group stage. It only gets easier from here.

Tonight’s match is pivotal for both teams as Uruguay look to gain a crucial three points after their loss to Mexico in the opening match. Meanwhile, Venezuela will be looking to take another giant leap towards advancing to the knockout stages if they grab another three points. In fact, a win would help them qualify for the knockouts with a game to spare if Mexico beats Jamaica.

Hello, and welcome to VAVEL USA's live coverage of tonight's crucial Group C encounter at the Copa America Centenario! My name is Josef Leizerowitz, and I'm genuinely thrilled to be bringing you tonight's match between Uruguay and Venezuela. We've got plenty of time until kick-off, so sit back, relax, and let me walk you through the build-up to the match.

Montreal Impact beaten by NYCFC a day ago