FULL TIME 3-2 UNION ON A LATE WINNER. UNION WILL PLAY EITHER NYCFC OR COSMOS IN THE NEXT ROUND

Four minutes added at the end of the game for stoppage time.

88': City Islanders down to ten men as Barril sent off for an awful sliding challnege from behind on Fernandes

84': Professional foul by Shane Johnson earns him a Yellow Card

82': Yellow Card issued to Bendow. Free Kick Union in the attacking half.

78': Herbers comes out of the game for Le Toux

72': Union Corner Kick is dealt with relatively easily by Harrisburg as Fabinho ends up kicking the ball out for a Harrisburg throw in

69': Harrisburg with a double subsutition. Foster on for DiPrima. Bendow on for Bolduc. Nice opportunity for both to make some noise hear and help this time come back from a dire situation.

68': Harrisburg player down and receiving attention by medics.

64': Gaddis gives the ball away by midfield but Harrisburg's shot goes over the net for the Goal Kick

62': Union close! Fabinho's cross finds Herbers but Noble makes a good reaction save to keep it at 2-0

61': Ilsinho coming off for Fernandes. Good play from Ilsinho should have had a goal, but good combo play in the offensive half

55': Harrisburg shot is blocked by Wheeler on net. Likely goal if not deflected out. Goal Kick Union

52': Corner Kick leads to nothing but a Union Goal Kick

52': Great save by McCarthy on a one- on-one to force a corner kick

51': Throw-in Union in the defensive half.

50': Union Free Kick is headed on but collected by Noble

45': Throw in Harrisburg by midfield

43': Not much going on to end half so far, both teams kind of looking for the locker room at this point

38': Alberg skips the free kick in front of the keeper expecting someone to get a touch on it but it is collected by Nobles.

37': Ensuing throw-in leads to a free kick from the left side of the box

36': Herbers up as play continues on. Fabinho helps Philadelphia get a throw in deep in the offensive half.

35': Herbers is down on the field and receiving attention

33': Yellow Card for Warren Creavalle for a foul on Wheeler. Free Kick Harrisburg in the offensive half

29': Wheeler again collides with McCarthy as the whistle blows for a foul

27': Wheeler flies into McCarthy and McCarthy is down for a second but gets up.

25': Good play by Fabinho to shield the ball out for a Union Goal Kick

21': Resulting Free kick by the Islanders finds two heads but is put out wide for a Union Goal Kick

16': Ilsinho showing the crowd his footskills as he cuts inside but has his shot blocked and cleared

14': Union playing aggresively. It looks like the fullbacks are pressing high and the wingers are tucking in due to Harrisburg only playing three in the back.

11': Ilsinho is pressing heavily inside not playing much of the wing in this 4-2-3-1

10': Nogueira taken down hard near midfield. Was down but is not up and walking around. Free Kick Union

9': Close for the Union again! Good 1-2 play by Herbers and Ilsinho puts Ilsinho through but the Brazilian cannot put his shot on target. Goal Kick City Islanders

8': Harrisburg starting to wake up and building possession through the back

7': Cross is easily collected by McCarthy.

3': GOAL UNION!! Too easy for the Union as Restrepo collects an errant Noble parry on an soft cross and taps it in for the 1-0 lead!

2': Close! Gaddis crosses to Ilsinho who puts it on net but it deflected away by Noble. The ball squirms around in the box before being finally cleared.

1': Union start the game with the opening kickoff

We are about to get underway!

Curtin really turned over the lineup here. Be interesting to watch the cohesiveness of this lineup 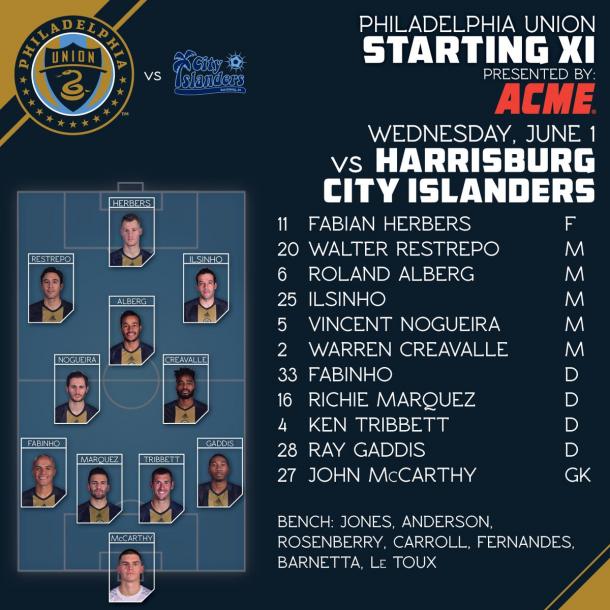 We are about 15 minutes away from Kickoff here. Lineups Incoming!

On the other side, one player to watch for Harrisburg is forward Aaron Wheeler. Wheeler is a former Union striker/center back, who in ten games this season has three goals and one assist. He is 6’4” and will need to be locked down on set pieces in order to prevent chances for the 28-year-old Baltimore native. Fans should expect Union center back Richie Marquez to be tasked with marking the tall striker on corner kicks.

Another couple of players that could see extended minutes on Wednesday could be Roland Alberg and Walter Restrepo. Both players have seen little play time this season so far, despite many believing that both should be rotated through the squad. With Philadelphia returning to MLS play on Saturday versus New York City FC, keep an eye on which players Curtin sits to rest for Saturday.

Jones received the start in Philadelphia’s last game, a 3-2 win over Columbus when Blake was gone with Jamaica. However, during last season’s US Open Cup run, John McCarthy was the starting goalkeeper for Philadelphia and helped lead them to the US Open Cup Finals. McCarthy dazzled during last year’s competition and, if Curtin puts any stock into the Philadelphia native’s play last season, he could be in line for the start.

One key to watch this game is how Curtin will rotate his squad, if at all. Jamaican International Andre Blake could possibly be available for Wednesday’s night game as reported by the Union. Jamaica struggled in the Copa America as they did not win a single game nor score a single goal in any of their three games. If Blake does not go on Wednesday night, Curtin has two options: John McCarthy or Matt Jones.

One of the more interesting storylines between these two teams is that this will be the first matchup between the City Islanders and the Union since their affiliate partnership was dissolved last season. At the end of 2015, Philadelphia announced the formation of their own USL side, Bethlehem Steel FC, who began play this season.

In 2014, Philadelphia defeated Harrisburg, 3-1, in extra time after Maurice Edu tied the game up in the 89th minute. Andrew Wenger added an extra time brace to seal the victory for the Union.

In 2012, the two sides faced off in the Quarterfinals as the Blue and Gold unleashed an onslaught of goals to beat the City Islanders, 5-2. Philadelphia opened that game very much on the front by scoring three goals in the first 30 minutes. Harrisburg would answer back would two quick goals in the second half, but the Union, led by a Lionard Pajoy brace, would not be defeated on the day.

The Union and City Islanders have extended history with each in the US Open Cup.

In last year’s Open Cup, Harrisburg defeated Reading United AC in the second round before falling to fellow USL side Rochester Rhinos, 3-1. Rochester would go on to lose to the Union in their next game in the Open Cup.

Philadelphia have been in the US Open Cup Final the last two years, even going to extra time in both, but were unable to lift the trophy either time. Despite exceeding standards in league competition, Philadelphia Head Coach Jim Curtin has told people many times that his team will not take their foot off the pedal during the Open Cup.

In United Soccer League, Harrisburg is in 11th place out of 15 teams, with 13 points in 13 games. They currently trail first-place Louisville City FC by 15 points.

In Major League Soccer action, Philadelphia find themselves on top of the Eastern Conference, leading second place New York Red Bulls by four points. On the season, the Union have six wins, three losses and five ties. One of the keys to the Union’s success on the season is the ability to make Talen Energy Stadium a fortress. In their 2016 home campaign, Philadelphia has five wins, zero losses, and two ties.

Philadelphia comes into Thursday’s match after a two-week pause in play for Copa America Centenario. Harrisburg is coming off a 1-0 loss to New York Red Bull II at Red Bull Arena last Thursday.

The game will be available for all to via YouTube.

Welcome to VAVEL USA’s LIVE coverage of the 2016 Lamar Hunt United States Open Cup. Tonight’s Round Four matchup is between the Philadelphia Union and Harrisburg City Islanders will take place at Talen Energy Stadium in Chester, Pennsylvania. I’m Jordan Wohl, and I’ll be providing minute-to-minute updates, commentary, and results of the match. The game starts at 7 PM EST and there will be coverage pregame, mid-game, and postgame.

New York Red Bulls vs Nashville SC preview: How to watch, team news, predicted line-ups and ones to watch 2 days ago
//