For the second and last time in the 2016 Copa America Centenario, Colombia have defeated the United States. This time around, there was only one goal scored, but Colombia netted third place in the process.

The United States missed Bobby Wood in their last match and in the fourth minute he showed them why. Wood found space about 25 yards away from goal and unleashed an audacious attempt. While the effort was nowhere near the frame of the goal, Wood has that mindset to at least have a crack in hopes that it would test the opposition goalkeeper.

Eight minutes later, Colombia had their first big chance of the night. James Rodriguez unleashed a wicked shot from the top of the half circle through a couple of U.S. defenders. Tim Howard, however, stood his ground well too keep the shot out.

In the 15th minute, the USMNT could have tested David Ospina. Jermaine Jones played a ball out wide and Alejandro Bedoya chased it down. As Bedoya reached the pass, he played a pass of his own back towards the middle of the area where Clint Dempsey was waiting. The Seattle Sounder man nearly got a foot on the ball but it was deflected out for a corner instead. 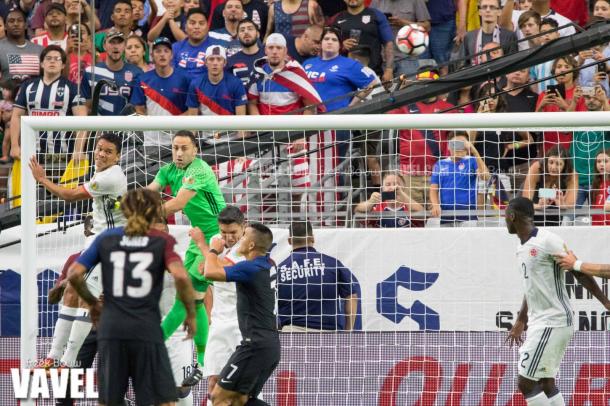 Colombia was nearly gifted a goal in the 24th minute of play. The US’s defense fell asleep as they hoped for the offside flag to be raised on James, but it never was. James continued to play on and was one on one with Howard. The Colorado Rapids goalkeeper came off his line extraordinarily well.

After the United States had done so well to absorb pressure in the opening 30, Colombia opened the scoring with one swift move. James Rodriguez was the orchestrator of the move, lobbing a ball over the top of the defense towards Santiago Arias. Arias, who hones his craft with PSV, rose to meet the ball with his head. The defender did and hit it back across the frame of the goal where Carlos Bacca poked it past Howard.

The South American side had been building up towards this goal after the opening quarter of an hour. A simple pass set off the whole move but it was nothing less than what they deserved.

With three minutes remaining in the half, Jones nearly found the equalizing goal. His shot deflected off of Arias and almost snuck past the inside of the near post.

Clint Dempsey tested David Ospina, as he did in the first meeting, off a great free kick in the 51st minute. The effort from Dempsey had eyes for the top right corner. Ospina though rose up and got a hand on the ball to keep his clean sheet preserved. The United States were gaining confidence as the second half wore on. Gyasi Zardes let fly from outside the box, but his attempt went wide of the goal.

Colombia nearly scored their second goal, and should have, in the 60th minute. Juan Cuadrado flicked a ball up and over Tim Howard. It looked like the ball was going to nestle into the top left corner, but it hit the crossbar instead. On the other end, two minutes later, Wood almost found the US’ first goal of the night. Wood fought through a couple of Colombia chances and beat Ospina. Like Cuadrado, his effort bounced off the woodwork, this one, hitting the right post.

The chances kept coming for the host nation in the second half. Five minutes after their previous effort, Wood nearly created a second opportunity for his country. He got by a few Colombia defenders again but was stripped of the ball at the vital moment.

As the match was dying down, both countries were given red cards. Arias brought down Michael Orozco but the latter shoved the Colombian player with both hands to the ground. However, Arias was also given his marching orders for provoking the American.

The United States should be proud of the way they played in this tournament. No one expected them to get this far and can build on this for the future.

D.C. United vs Chicago Fire preview: How to watch, kick-off time, team news, predicted lineups, and ones to watch 19 hours ago

Opinion: MLS Rebrands need nods to the past to stay away from&nbsp;monotonous&nbsp;Euro-centrism a day ago

Orlando and NYCFC Split the Points 3 days ago

Columbus Crew SC to rebrand as 'Columbus SC' 4 days ago
//