The Philadelphia Union travel to Sandy, Utah to take on Real Salt Lake at Rio Tinto Stadium on Saturday night in search of their fifth successive victory.

Some thought that the appointment of Mike Petke as manager to replace Jeff Cassar on March 29th would prove to be the magic wand that RSL needed following a winless start to the season and a very poor 2016; however, Petke's tenure at RSL has been shaky so far. A record of three wins and six losses, since the former New York Red Bulls' manager, was appointed sees RSL sit second bottom in the Western Conference and second bottom in the overall table. Despite Petke's pedigree, it's been clear that while there is young talent being integrated into the squad and exciting new acquisitions such as Albert Rusnak, the team is still heavily reliant on veterans such as Nick Rimando and Kyle Beckerman.

As for the Philadelphia Union, the pieces finally seem to be clicking. A torrid start to the season saw them fail to win a match until May, a winless streak that had been running since September of last season. However, the month of may has been very kind to them as the Union looks to close out what would be an undefeated month with a victory against Real Salt Lake on Saturday night. In the process of securing what would be a five-match winning streak, the first in club history, the Union have scored an impressive eleven goals in their past four matches, conceding just once and now sit in seventh place in the Eastern Conference, just a point off of New York Red Bulls in the sixth and final playoff spot, with two matches in hand on their regional rivals.

The Union has a remarkable consistency about their playing history versus Real Salt Lake with an all-time record in the league of 0-2-6. Most recently, the sides faced each other this past July at Talen Energy Stadium with goals from Roland Alberg, Joao Palta, and Javier Morales as Real Salt Lake emerged victorious by a score line of 2-1. If Philadelphia is to secure an unprecedented fifth straight victory, they're going to have to break another record, their first-ever victory against RSL.

Both Philadelphia and Salt Lake have at times been decimated by injury this season and Saturday's matchup sees quite a few players miss out on both sides.

The Union will be without long-term absentee midfielder Maurice Edu once again as he continues to recover from his left tibia break, while other long-term injury worry defender, Joshua Yaro returned to training this week having recovered from his shoulder injury; however, manager Jim Curtin said in his midweek press conference that Yaro wouldn't feature for the Union's USL affiliate side Bethlehem Steel until the beginning of June, let alone for Philadelphia. Former captain and midfielder Brian Carroll who's suffering from lumbar disc herniation remains out, while midfielder Fabian Herbers who suffered a right adductor partial avulsion in the Union's match against the Colorado Rapids will be out for 2-4 weeks, and finally, midfielders Ilsinho and Roland Alberg remain question for the match with a right gastric strain and left squad strain respectively. Derrick Jones and defender, Auston Trusty are with the United States Men's National Team Under-20 squad at the U-20 World Cup in South Korea and remain unavailable as well.

As for RSL, their defensive pool remains incredibly thin. David Horst will definitely miss out as he recovers from knee surgery, Demar Phillips is questionable with a hamstring injury, and Tony Beltran is probable but is expected to play having recovered enough from his back injury to train this week. In continuation of their defensive woes, Danny Acosta and Justen Glad are also unavailable as they're with the US U-20 squad in South Korea. In midfield, captain Kyle Beckerman misses out having received a one-match suspension from Major League Soccer's disciplinary committee for violent conduct following a poor challenge on Seattle Sounders' Clint Dempsey last weekend, Jordan Allen remains questionable with a right squad train. Finally, up top Salt Lake will be missing duo Brooks Lennon and Sebastian Saucedo who are also with the US U-20 squad in South Korea. 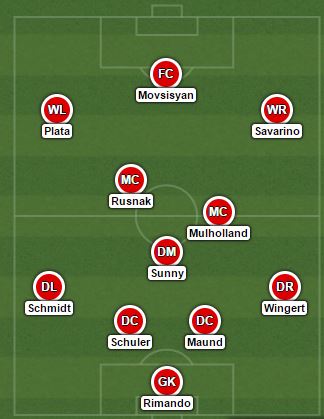 The one area where RSL are expected to have some consistency is through the center, Nick Rimando continues in between the sticks despite having been dropped earlier in the season and looking a far cry from his best these day while the center back partnership of Chris Schuler and Aaron Maund will continue barring injury while Justen Glad is away at the U-20 World Cup.

Despite being listed as a center back, the left-footed Justin Schmidt has played three of his last four matches at left back, with Phillips expected to remain out through injury and the aging Chris Wingert increasingly used as a depth player at right back and center back, there's a good possibility Schmidt continues his stint at left back.

As for right back, should Tony Beltran not be available to start the match, expect Chris Wingert to deputize once again. Despite his advanced age, the versatile Wingert appears to be ahead of natural right back, Reagan Dunk in the pecking order with the rookie having only played two matches so far this season.

In midfield expect Stephen “Sunny” Sunday to play the holding role in the midfield three next to Albert Rusnak and Luke Mulholland as he fills in for the suspended Kyle Beckerman.

Finally, up top new young DP, Jefferson Savarino is likely to accompany Joao Plata as the wingers with Yura Movsisyan as the central striker. 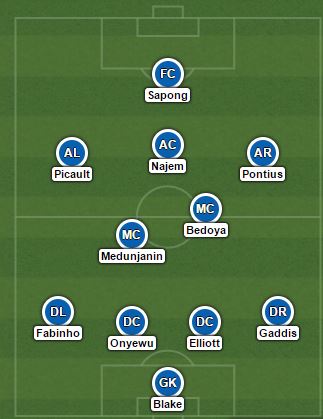 As for Philadelphia, Saturday's lineup should look relatively similar to the one fans saw against the Colorado Rapids at Talen Energy Stadium. Defensively, All-Star goalkeeper, Andre Blake will continue in goal, with Ray Gaddis is likely to retain the right-back spot ahead of sophomore Keegan Rosenberry, the center back pairing of Oguchi Onyewu and Jack Elliott is likely to continue with Richie Marquez the odd man out, and a now fit Fabinho will slot in for Giliano Wijnaldum who impressed in his first MLS start versus Colorado. In midfield, Alejandro Bedoya and Haris Medunjanin continue to impress centrally while Adam Najem could get his first career MLS start in the attacking midfield role with Roland Alberg and potentially Ilsinho out. As for the wings, expect the increasingly productive duo of Fafa Picault and Chris Pontius to start with CJ Sapong as the lone forward.

While the elevation will have an affect on how Philadelphia play, I question Real Salt Lake's ability to keep out goals at the moment and while Savarino looks like an exciting new talent out on the right-hand side I don't think they'll be able to put too many past a Philadelphia defense that's finally grooving.

Opinion:&nbsp;Why the Chicago Fire should switch to a back three 5 days ago

Chicago Fire: Three reasons to have some optimism 10 days ago

Inter Miami FC was no match for D.C. United 15 days ago

Chicago Fire 0-1 CF Montréal: The Fire snatch defeat from the jaws of victory 17 days ago

Chicago Fire vs CF Montréal preview: How to watch, kick-off time, team news, predicted lineups, and ones to watch 18 days ago

Chicago Fire vs Inter Miami preview: How to watch, kick-off time, team news, predicted lineups, and ones to watch 25 days ago
//