While both sides made the playoffs last season, the Philadelphia Union's inconsistency and DC United's struggles in front of goal are beginning to make it look like a playoff birth won't be the case for these regional rivals this season. Bar a scrappy victory in the Lamar Hunt US Open Cup earlier this month, the Union has suffered three straight losses, virtually erasing all the progress the team made in May.

As for DC, their victory against Atlanta United was not only the first time since April they had scored more than one goal in a match but also their first victory since the end of May. As it stands because of DC's victory last week, Philadelphia sits dead last in the East, albeit with one to two games in hand and two points behind DC. A win for Philadelphia would see the two sides swap spots in the standings and leave the Union three points off of Columbus Crew in the sixth and final playoff spot in the East.

The Union has a 9-8-4 all-time record against DC United in league play, with Saturday's match being the third and final time the two sides face off against each other this season. The two sides met back in April at RFK Stadium as DC emerged victorious by a scoreline of 2-1 with goals from Jose Guillermo Ortiz and Luciano Acosta as well as CJ Sapong for Philadelphia. More recently, the two rivals faced off in May at RFK with Philadelphia running rampant by a score line of 4-0 with goals from Haris Medunjanin, Oguchi Onyewu, Fafa Picault, and Fabian Herbers with DC's Acosta being sent off in the second half. The win was Philadelphia's second overall in the 2017 MLS season.

Philadelphia will be without the suspended Derrick Jones after a two-footed tackle against New York Red Bulls' Felipe Martins saw him sent off last weekend in what would eventually lead to the Union's unraveling in the match as they went on to lose 2-0.

As for the Union's injury concerns, captain Alejandro Bedoya returned to full training during the week and is expected to play against DC.  Meanwhile, midfielder Maurice Edu remains out with some questioning whether the Designated Player will ever return and Fabian Herbers remains out with a right adductor partial avulsion. Both Warren Creavalle and Jay Simpson are suffering from hamstring strains with Creavalle not expected to play, while Simpson is questionable. Finally, Brian Carroll could return to the bench in Jones' absence having recovered from a lumbar disc herniation but is more likely to start for Bethlehem Steel this weekend. Ken Tribbett is also fit but has spent the entirety of this season with the Steel.

DC United's injury list is also extensive. Patrick Mullins is expected to be out until mid-July following knee surgery, newly acquired forward Deshorn Brown will be expected to carry the goalscoring load in his absence. Defensively, DC continues to be without starters Sean Franklin and Bobby Boswell who have hamstring and groin injuries respectively, as well as midfielder and backup right back Nick DeLeon who is out with a lower abdominal strain. Finally, Rob Vincent is a long-term absentee as he recovers from a meniscus injury in his left knee.

Bizarrely, a number of Union players featured for Bethlehem Steel in mid-week including Keegan Rosenberry, Joshua Yaro, Giliano Wijnaldum and Richie Marquez lending weight to the idea that they may not be returning to the Union starting lineup in the near future. One, in particular, has many fans scratching their heads with the assumption that Ray Gaddis usurping Keegan Rosenberry at right back was merely a temporary fix until Rosenberry straightened his head out following what some have described as a sophomore slump.

Elsewhere on the field, the Union's starters are in part dictated by injuries and suspensions. Andre Blake remains the undisputed starter in goal, while the events in midweek with the Steel and Jim Curtin's general desire for defensive consistency means a back for that's likely to contain Ray Gaddis, Jack Elliott, Oguchi Onyewu, and Fabinho.

In midfield, captain Alejandro Bedoya returns to continue his fruitful partnership with Haris Medunjanin. Fafa Picault has been a revelation at left midfield and Chris Pontius continues to be an asset for Philadelphia wherever he plays. Ilsinho is a stop gap solution in attacking midfield with Bedoya looking poor in that spot and Roland Alberg simply being downright inconsistent short of them signing Costa Rican trialist Elías Aguilar in the near future, expect Ilsinho to continue there.

Finally, C.J. Sapong has shown flashes of his best up top with the form that's earned him a call-up to the preliminary squad of the US Men's National team for the Gold Cup. Even when Simpson returns from injury, don't expect Sapong to go anywhere anytime soon.

Expect the Union lineup to look something like this: 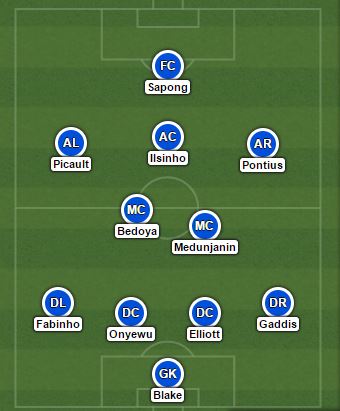 For the visitors, there are some questions over their starters and formation given a recent formation switch and the sheer number of injuries the squad is facing. Bill Hamid is a stalwart presence in goal when he's healthy while a resurgent Chris Korb seems to be keeping rookie defender Chris Odoi-Atsem out of the lineup. Kofi Opare continues to deputize for the injured Bobby Boswell next to Steve Birnbaum though neither has been at their best compared to previous years and Taylor Kemp remains essentially unchallenged at left back. Marcelo Sarvas and Ian Harkes is likely to continue as the preferred pairing in midfield with the formation change seemingly kicking Jared Jeffrey out of the lineup, Rob Vincent unavailable through injury, and Julian Büscher being more of an attacking midfielder.

DC has a wealth of options on the wings, with Lloyd Sam and Lamar Neagle having played when the two sides last faced off while Sebastian Le Toux and Patrick Nyarko played against Atlanta United this past weekend. Nyarko scored this past weekend and Le Toux may have a point to prove against his old side so expected them to keep their spots. In attacking midfield, Luciano Acosta is the starter despite looking like a shadow of himself in comparison to last season and Deshorn Brown could start up top in place of José Guillermo Ortiz. 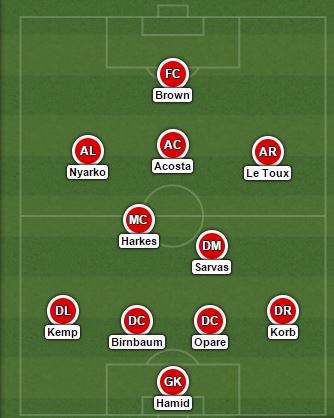 Philadelphia has shown that they're capable of getting results at home this season, particularly against their rivals. While it won't be a blowout like the game at RFK, Philadelphia should emerge as winners.

Austin FC vs Colorado preview: How to watch, team news, predicted lineups and ones to watch 3 days ago

Philadelphia Union vs Chicago Fire preview: How to watch, kick-off time, team news, predicted lineups, and ones to watch 2 days ago