After a completely quiet international break in which nothing of any consequence happened whatsoever, and after which everything was fine*, the Timbers get back to business on Sunday, welcoming DC United to Providence Park for the penultimate game of the 2017 regular season.

United don't really have much to play for - the East's playoff picture is settled, and United aren't in it. In fact, they're guaranteed last place in the conference - the best they can do is finish one point behind Orlando City if OCSC lose both their remaining games. So DC is playing for pride, and their guys are playing for jobs next season, but otherwise, there's not a lot there.

The Timbers, on the other hand, have a whole lot to play for and a whole lot at stake. Unlike the East, the West is anything but settled with two games to go - only Vancouver has secured a playoff spot. Portland could have locked one down in San Jose against the Earthquakes a couple weeks ago but didn't, while the rest of the West stumbled as well.

Nobody, however, stumbled as badly as Sporting Kansas City. Going into the international break, SKC had two games in hand on the West and was level on points with Portland and Seattle, and in a really good spot to make a run at first place. However, they took one point from those two games, which is why games in hand don't mean much - you gotta win them to make them mean something.

So basically, with two games left, there's almost literally everything to play for in the West. It's extremely unlikely that Portland would miss the playoffs at this point (sportsclubstats have them at 99.9% certain), but where they end up being seeded is still very much up in the air. If they win out and other results go their way, they could finish first, but they'll most likely finish third or fourth; not ideal because that means a Wednesday playoff game, but given where the Timbers were in July, I can't complain about not earning a bye if that's what happens.

*I may not have fully caught up on the news
**Physically, anyway 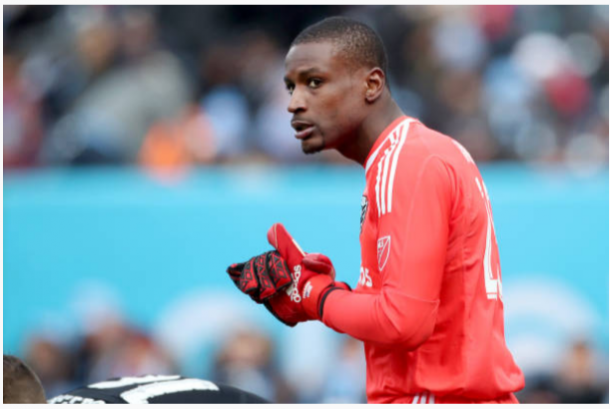 Bill Hamid is one of my favorite non-Timber MLS players
Image: Tim Payton/Corbis via Getty Images

The Timbers internationals came through the international break unscathed**, so the injury list is still Fanendo Adi, pretty much. Hopefully, Caleb Porter will go back to the back four that's been working so well and restore Vytas to the starting lineup, because they can't afford not to have arguably the team's best (and absolutely their most consistent) defender on the pitch right now.

DCU may yet again be without Bill Hamid, who's been dealing with a back strain, but otherwise should also be pretty much at full speed.

Chicago Fire 2-1 D.C. United: Race for the Playoffs catches fire in the East 15 days ago