The Houston Dash have re-signed two players and welcomed a third as they finish rounding out their 2018 roster in preparation for the start of preseason. Defenders Cami Levin and Cari Rocarro return for their second and third seasons in Houston, respectively. The club has also signed South African forward Thembi Kgatlana. 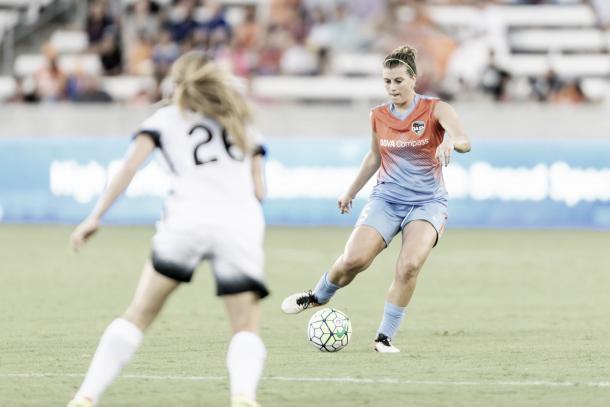 Levin joined the team during the second week of the 2017 season after a trade with the Orlando Pride. The 27-year-old Stanford alumna joined the league in 2014 when she signed with Sky Blue FC after playing in both Sweden and Australia from 2012-2014. She joined the Orlando Pride in 2016 before being traded to Houston where she made 22 appearances. Since returning from playing professionally overseas, she has made 72 total appearances in the league.

As the fifth pick in the 2016 NWSL College Draft out of the University of Notre Dame, Rocarro has made 33 appearances in the league, mostly in the backline but shifted to defensive midfield during the 2017 season. The 23-year-old New York-native played in two U-20 world cups with the United States in 2012 and then again in 2014. She played a vital role in 2012 as she helped the US win the world cup along with her Dash teammate Kealia Ohai.

Former South Africa and current Dash coach Vera Pauw now has three talented players from South Africa as the Dash announced the signing of Kgatlana. She may only be 21, but the talented striker is already an Olympian having represented her home in the 2016 Summer Olympics.

Kgatlana spent the past year playing for the University of Western Cape in South Africa and impressed at the Council of Southern Africa Football Association Women’s Championship in 2017. She was named Player of the Tournament as she helped her country’s team, known as Banyana Banyana, to a fourth straight Cosfa Championship title.