The current champions of the U.S. Open Cup could not defeat the second-best team in the Eastern Conference of last year, which got the points in an exciting game with plenty of occasions for both teams.

The Children’s Mercy Park of Kansas City hosted an honorable environment for the Home opener of the MLS 2018 for the ‘Wizards’, with fireworks to welcome the team and “The Blue Hell,” full. Which is considered one of the loudest crowd of the league did not disappointed in an important event which faced direct contenders for getting the desired objective of the MLS Cup 2018.

The first minutes of the MLS 2018 for both teams were intense and the ball did not stop moving on the pitch with goal opportunities for both teams, although those from the New Yorkers were clearer. 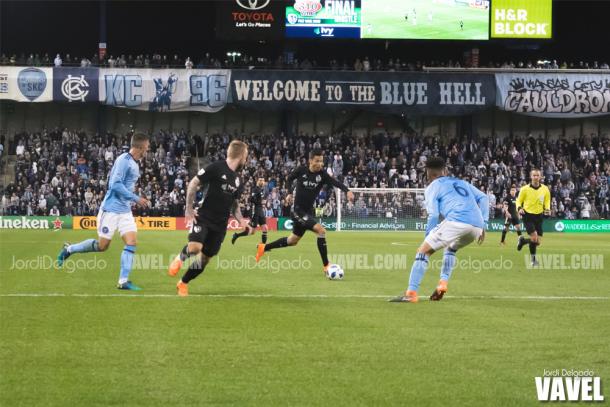 In the 20th minute, a headshot from Espinoza into the goalpost after a corner woke up the Kansans, and they started attacking with more ambition since then. Coized tried in the 29th minute with an acrobatic shot half scissor-kick that crossed in front of Johnson, but it ended by diverting too much.

In the NYCFC side, Villa was the most active player of the attacking line with several shots from outside the penalty area. Due to the good defensive positioning of Sporting KC, the Spaniard forward could not shoot on target because all his shots were blocked by Kansas’ defense or they went way beyond the goal. However, his boots put the first goal of the game in the 32nd minute, when Villa gave a millimetric center to the Argentinian Maximiliano Morález, who only had to push it into the net to take the lead for the New Yorkers in the scoreboard.

With the score favoring Patrick Viera's team, the opportunities for both continued to be equal and with an incredible game speed.

In the 52nd minute, a ball loss from Sporting KC in the attacking zone let New York City build a quick counter-attack which was lethal for the locals as it allowed Medina to score the 0-2.

There was a lot of controversy during the last moments of the game. The experimented referee Mark Geiger, in the 78th minute, called a penalty in favor of the locals and, after further revision with the VAR referee, dismissed the decision and restarted the game with a dropped ball. Seven minutes later, a similar action which the referee did not call, ended with several protests in the field by the locals. After another VAR decision, three minutes later, Geiger called a fault in the border of the penalty area and showed a red card to the defender Maxime Chanot in the 88th minute. The fault kicked by Gutiérrez ended in the goalpost after Johnson saved the ball and avoided it to finish inside his net.

Kansas City pushed the last minutes and has total control of the game after being one man up. Despite that and after the 6 minutes of extra time, they could not score any goal and the three points traveled to New York.

In the tactical aspect, the Spanish Illie Sánchez played as midfielder in a 4-3-3 formation, and he showed himself sometimes overpassed by the 4-2-3-1 offensive and ambitious formation of New York City, having many men in the last half of the pitch what made the man of Kansas going back too much and making harder for them to create dangerous plays.

Despite none of the teams having a good preseason, NYCFC got stronger after this first game of the season.

New York City will receive LA Galaxy at the Yankee Stadium next Sunday meanwhile Sporting Kansas City will face Fire when they take a trip to Chicago on Saturday March 10th.

Chicago Fire 2-1 D.C. United: Race for the Playoffs catches fire in the East 9 days ago