It took six games, and it wasn't pretty, but the Timbers got their first win of the season Saturday night at Providence Park, a 3-2 win over a Minnesota United team that, for long stretches, gave the Timbers all they could handle. But, despite the win, and the sense of relief it conveyed, the Timbers still have some pretty sizable problems they will need to solve if they want to be competitive in the West this season.

Alvas Powell. I know I'm not alone in this, but I have been very critical of Alvas Powell in the last season or so. After a first season, in 2013, that showed a whole lot of promise and flashes of brilliance, Powell's Timbers career has been very much one step forwards and two steps either sideways or back, depending on how charitable you're feeling.

Saturday night gave us a rare appearance of Good Alvas, in which Powell not only scored a pretty fantastic goal (I mean, watch the move that put Francisco Calvo on his butt - that was some serious wizardry), but was also a huge presence down the right side for about 70 minutes, on both the defensive AND distributive sides of the ball. This forced Minnesota to pay him a lot of attention, which opened up the rest of the right side for the rest of the Timbers' buildup and attacking play.

It's probably too much to hope for that Alvas can be this dominant every week, but it was nice to see for one game and hopefully this will give him the confidence he needs to at least approach this level of performance on a more regular basis.

Confidence. I've said it before and I'll keep saying it - I'm not a fan of intangibles, precisely because they're intangible. I don't doubt they exist; team sports and group dynamics almost command that they do. What I am not a fan of, at all, is using intangibles to tell a story about a game, a team, or a season when we are not privy to what those intangibles are.

There's a huge temptation, that most of us fall prey to because human beings love story arcs, to overlay what we think is or should be going on, based on our perception of actions that we read/hear about or see that may or may not have a connection to actual game action, over the top of what is actually happening in a game, so that the actions fit our predefined narrative, rather than watching the game to see what the action of the game.

For instance, the Timbers were up 2-0 by the 24th minute, and appeared to be well on the way to that elusive first win. But, in the back of probably most Timber fans' minds as the game hit half time was "hey, we were up 2-0 against Orlando City as well, how'd that turn out?"

And then Darwin Quintero scored in the 64th minute; in the stands and no doubt in every Timber fan mind watching on TV as well, the panic set in. What was a comfortable lead became, mentally, another awful collapse. Or at least that's what the narrative tried to say.

Fanendo Adi got his first goal of the season
Image: Quinn Harris/Icon Sportswire via Getty Images

Thing is, the Timbers didn't play down to the narrative. Minnesota United adjusted at half time, and that's where the goal came from, but the Timbers also adjusted, and while they maybe didn't play as well as they had in the first half, the fact that they made an on-the-fly adjustment like that tells me that they're confident enough to diagnose what's wrong and try to fix it, instead of just doing what they always do and hoping for the best.

Will doing stuff in mid-flight like that always work? No. But Saturday's adjustment, from a pretty risky 4-3-2-1 to a more conventional two-band-of-four, got the job done and proved to me that the Timbers have the confidence a lot of us thought they might be lacking as they stumbled their way through their first five games.

Jake Gleeson's two amazing saves. I mean, this and, even more so this...that's good stuff. You won't find better saves than that this week, and it's yet another reminder that Gleeson's pretty good at his job overall. And yet, there's...

Jake Gleeson's concession. Look, I am in no way anti Jake Gleeson. Nor, however, am I strongly pro Jake Gleeson, in the sense that I think he's the best the Timbers could possibly do. Gleeson is...fine. His limitations are well known at this point; he's really good at making acrobatic reflex saves like the ones above, which is an invaluable skill.

But he's not so good, sometimes, at the fundamentals, as demonstrated on the goal Darwin Quintero scored to bring the Loons to within a goal. I mean, if those two saves above were save of the week, the Quintero one was whatever you'd call the opposite of that.

The Timbers are in an interesting spot at the keeper position. I think both Jake Gleeson and Jeff Attinella are perfectly adequate, replacement level MLS goalkeepers who do good things when called upon. I also think the Timbers could do better than either of them, should they want to go spend some of that sweet Nagbe TAM in doing so.

But in the absence of that spending, given that the options are Gleeson or Attinella, I will always prefer Gleeson, even with the occasional bad moment like the Quintero goal. Gleeson's reflexes have bailed the Timbers out a lot in the last two seasons and, I think, earned him the benefit of the doubt, even if he's not the ultimate GK answer the Timbers are looking for.

Defending in general. Even if the Timbers had Peak Nick Rimando in goal, it might not matter: their overall 2018 defense leaves a lot to be desired. They're currently averaging 2.33 G/GM against, which, and bear with me because I'm no expert here, doesn't seem very good?

For context, the team in MLS that gave up the most goals last year was this very opponent, Minnesota United, who ended 2017 at a 2.05 G/GM concession rate. The Galaxy were right behind them, at 1.97, and the Timbers were a full half-goal better than that, at 1.47.

Small sample size caveats apply, of course, but at this pace the Timbers will give up 79 goals this season; if something doesn't change quickly, the Timbers will be making news they don't want to make in their challenging of MNU's record of 70 goals conceded last year.

Not much; home openers are always causes for optimism, and Saturday night's result at Providence Park definitely made people cautiously optimistic. With NYCFC coming to town this coming weekend, we'll need all the optimism that can be mustered.

Chicago Fire vs Toronto FC preview: How to watch, kick-off time, team news, predicted lineups, and ones to watch 11 minutes ago

NYCFC 1-0 Montreal: Boys In Blue back in the win column 2 days ago

Orlando City vs Philadelphia preview: How to watch, team news, predicted lineups and ones to watch 2 days ago 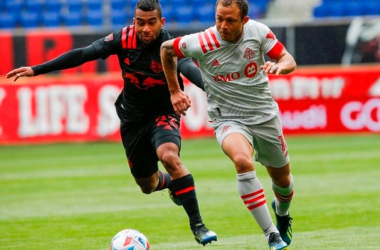