On Saturday evening, the Washington Spirit will try to continue their upward trajectory against Portland Thorns FC. Both teams are in the upper half of the league with the potential to take first place with a win on Saturday. Every team in the National Women's Soccer League is learning to work without some of their premier players ahead of the 2019 FIFA Women's World Cup in France. Washington and Portland both won their matches last weekend.

It wasn't that long ago that the Washington Spirit were one of the worst teams in the league. They scored just 12 goals in 24 games last year, but they've been much more successful this season.

Under new head coach Richie Burke, the Spirit have scored five goals in their first four matches, including three goals in a close win against Sky Blue FC last weekend. The Spirit scored three goals despite not having the services of Rose Lavelle or Mallory Pugh. Those two premier players were both unavailable due to national team duty.

The biggest question for the Spirit is whether they will be able to score against any team that isn't based in New Jersey. While the Spirit have scored five goals against Sky Blue FC, they have scored zero goals in their two matches against other teams. Four games is hardly a trend, but a game against the Thorns is an excellent way to decide whether they can score against other teams. The Washington forwards, Cheyna Matthews and Ashley Hatch, will need to be more productive against the Thorns this weekend if they want to earn three points.

The Spirit defense has been quite good. They've allowed just three goals in four games, thanks in large part to the excellent work of goalkeeper Aubrey Bledsoe. The Spirit will need the keep the Thorns offense in check if they want to win consecutive games.

It's hard to imagine that Portland would be as successful without Tobin Heath and Lindsey Horan. Last weekend they soundly beat the Orlando Pride despite missing five key players, but this weekend they have to face off against a better team in the Spirit.

Without Horan and Heath, the Thorns are going to have trouble controlling the midfield. They are usually the premier team in terms of offensive midfield play, but their ability to exploit teams will be put to the test against Washington this weekend. 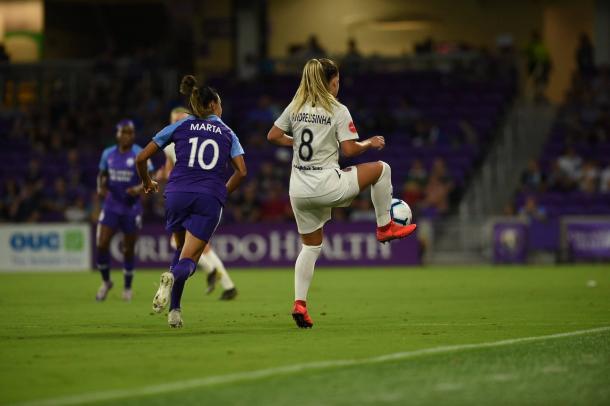 Portland is known for pushing their fullbacks far up the field. Meghan Klingenberg and Ellie Carpenter have been significant contributers on offense so far this season, and they will be one of the deciding factors in the game against Washington on Saturday. Without international players on offense and defense, those two players will need to be productive on both ends of the pitch in order for Portland to win.

Things for Portland have not been so good this year. Due to construction at Providence Park, Portland is playing their first six matches on the road. The Thorns won both of their match against Orlando, but they haven't won a game against any other team. It's always hard to win on the road, but Ana Crnogorcevich and Caitlin Foord will need to step up without the Americans on the pitch.

The match will kick off at 7:00 p.m. ET at Maureen Hicks Field in Boyds, MD. The game can be watched live on Yahoo! Sport in the United States or on the NWSL website for international fans.