After 94 minutes of action, Mexico beats the United States and wins the gold Cup 2019 in Chicago.
10:02 PM2 years ago

Guardado leaves and Reyes comes in.
10:02 PM2 years ago

Incredible double save by the best goalkeeper in Mexico history. Guillermo Ochoa, once again, clutch.
10:00 PM2 years ago

Antuna leaves the pitch and Alvarado comes in.
9:58 PM2 years ago

84 minutes in and still no yellow cards. Really poor game from the referee.
9:57 PM2 years ago

Final move from Berlharter. Lowitz for Ream.
9:55 PM2 years ago

'Tata' makes a move. Pizarro leaves the pitch and Carlos Rodriguez subs in.
9:54 PM2 years ago
Dos Santos goal that has Mexico 10 minutes away from winning the 'chip.

Really poor game by Moreno. Even though Mexico is winning, the center back is playing a really bad match.
9:51 PM2 years ago

Absolute banger by Dos Santos with his left foot.

Jonathan Dos Santos scores the first goal of the match after a 'cheeky' play by Jimenez.
9:46 PM2 years ago

Gallardo shoots from outside the box but staring into Steffen's hands.

Mexico starting to gain confidence. Two clear chances in a row for Jimenez but the striker is not able to score.
9:38 PM2 years ago

Another sub from the home team. Zardes comes in for Altidore.
9:35 PM2 years ago

First substitution of the game. Roldan comes in for Morris.
9:31 PM2 years ago

So far Gallardo and Rodriguez haven't been able to make an impact on the game. The left back and right back just can't send a good cross in.
9:28 PM2 years ago
Morris' early chance in the second half

Unreal save from Guardado on the line after a header from Morris. Another good chance for the US of A.
9:22 PM2 years ago

McKennie and Moreno go at it. Hard foul from the defender on Altidore.
9:19 PM2 years ago

Even though Pizarro suffered an elbow injury at the end of the first half, he will continue.
9:18 PM2 years ago

Second half is underway in Chicago.
9:02 PM2 years ago

First half is over. Close game but the clearest chances have been for the US so far.
8:58 PM2 years ago

Pulisic tries chipping over Ochoa but the Mexican's goalie experience helps him to get the ball.
8:57 PM2 years ago

Good shot from Jonathan Dos Santos. Outside the box but still close from the goal.
8:56 PM2 years ago
Some pictures of the first half in Chicago.

Not many players like Pulisic in the world. The best footballer at the Soldier Field tonight.
8:51 PM2 years ago
This was the play that made Gerardo Martino go off on the bench. Everyone from the Mexican squad that didn't start is warming up on the sidelines.

Another chance goes missing for @USMNT! Paul Arriola takes on Ochoa but is unable to hit the target. 0-0 in Chicago#GoldCup2019 #ThisIsOurs #MEXvUSA pic.twitter.com/anOfiMEAcJ

Aside from that good play from Pizarro, Mexico hasn't created chances at all.
8:46 PM2 years ago

A little bit of confusion between Moreno and Ochoa, and Arriola was close from scoring the first goal of the night. Another clear chance for the Americans.
8:46 PM2 years ago

Mexico is taking too long to interpret the game. Pulisic is the man to go to from the USA and the defenders still can't contain him.
8:44 PM2 years ago
Pulisic's early miss in the game.

Pizarro tries a bicycle kick but isn't able to contact the ball properly.
8:38 PM2 years ago

Things starting to get chippy at the Soldier Field. Altidore going at 'Chaka' after a hard foul from the defender.
8:31 PM2 years ago

Good play by Pizarro who sends a cross to Guardado but the midfielder isn't able to get a good touch on it.
8:30 PM2 years ago

Far from their best level Rodriguez. Had a good tournament in Mexico last semester but hasn't been able to find his game.
8:28 PM2 years ago

Mexico seems to struggle in the midfield.
8:27 PM2 years ago

In the first minutes of this Gold Cup Final, the US is deserving to get the win. Already two good chances by Pulisic and Altidore but they couldn't get on the board.
8:23 PM2 years ago

Unreal miss by Altidore. The striker had the clearest chance on a one-on-one play with Ochoa and he misshits it with the left foot.
8:21 PM2 years ago

Incredible run by Pulisic but Ochoa makes a good save and keeps the match tied at zeros.
8:20 PM2 years ago

First five minutes and still no clear chances for any of both teams.
8:16 PM2 years ago

We are underway here at Chicago for the Mexico vs USA Gold Cup Final!
8:16 PM2 years ago

8:14 PM2 years ago
Mexico's anthem resounds in Chicago! Spectacular.
8:13 PM2 years ago
The American anthem is being sung at this time.

8:07 PM2 years ago
What has happened in the last three encounters? Mexico can clearly smile about it.


The @USMNT and Mexico meet in the Gold Cup final for the 4th time in 12 years. 🇺🇸🇲🇽

You must watch yesterday's Mexico's Martino press conference. The head coach had a really interesting intervention.

7:54 PM2 years ago
Wondering how it looks like from pitch level? This is how fans will experience the game live from the stadium.
7:48 PM2 years ago

United States jumps on the Soldier Field pitch for their activation and dynamic drills. 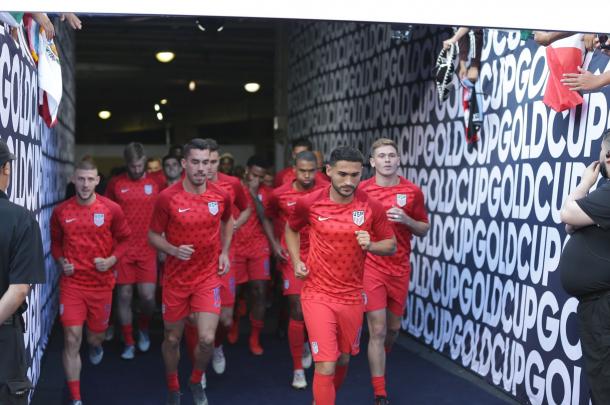 The Mexican squad started the warm-up routine. In the picture, Carlos Salcedo gets ready. 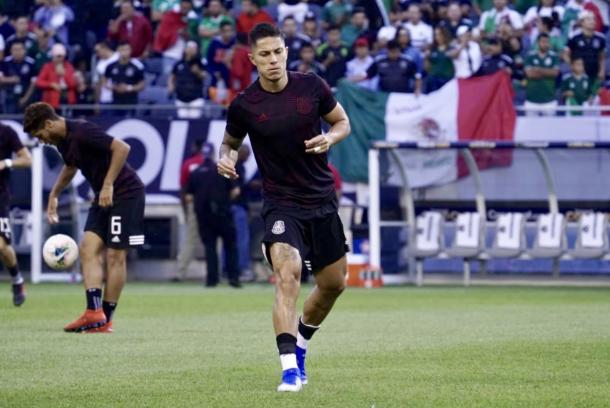 7:32 PM2 years ago
Mexican fans are really familiarized with Univision, who owns the Tri's TV rights.

If the hosts win by statute, many will say they have tied at 7 crowns. 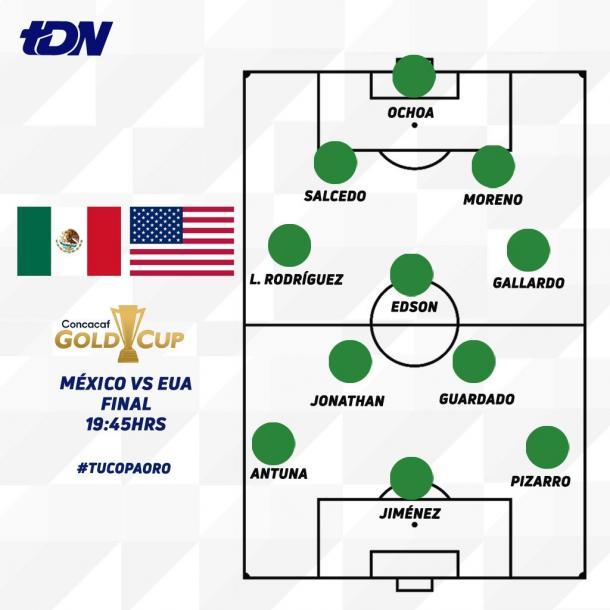 The #USMNT Starting XI that will start tonight’s #GoldCup2019 Final vs. 🇲🇽

6:44 PM2 years ago
Mexico will wear their black kit.

The defender will be crutial tonight for Tata Martino's squad.

Martino thinks this about USA's coch

"First, I have a great respect for Gregg Berhalter, the person and for the coach. I think he is one of the best coaches that I have faced in MLS and obviously the football that he practices needs time and is what he had in friendly matches, I think that that tuning and that knowledge of what the coach wants, on the part of its players, it begins to be seen now in the Gold Cup with the matches that have already passed and even with the passage of time they are still going to do it better, it is not easy the way that Gregg proposes that his teams play that only in a handful of matches can be seen in its full dimension."
5:18 PM2 years ago
What does it mean to play for Mexico? El Tri stars answer that question in this great video.

4:53 PM2 years ago
"It's an even final, with possibilities for both sides, I imagine a game of much more shared protagonism. America proposes a football of attack, of tenure, of protagonism and undoubtedly we're going to have to face a different game from those we've played so far."
4:52 PM2 years ago

Prior to the practice, Gerardo Martino spoke at a press conference, where he addressed topics such as tomorrow's game vs USMNT and what will happen with the team he leads.
4:44 PM2 years ago

Relive the last training in Mexico. This is how El Tri practiced yesterday for tonight's game.

According to the bookmakers, Mexico is the favorite tonight and the tie in regular time is the second most feasible result.
10:35 AM2 years ago
> If you want to directly stream it: fuboTV (Free trial + monthly subscription), Univision NOW, Fox Sports GO, CONCACAF GO.

If you want to watch in on internet: VAVEL USA is your best option!

3:54 AM2 years ago
Do not miss a detail of the match with the live updates and commentaries of VAVEL. Follow along with us all the details, commentaries, analysis and lineups for this Mexico vs USMNT game.
3:53 AM2 years ago
If you want to watch the game on TV, your options are: Univision Deportes, Univision (US-Español), FOX Sports 1 (US-English).
3:52 AM2 years ago
The resale will be an important factor, since the tickets were sold at an average price of 250 dollars, while the resale has tripled to a minimum of 800 dollars.
3:52 AM2 years ago

House will be full

Chicago's Soldier Field, which has a capacity for 61,500 spectators, will look completely full and where most are expected to be Mexican.
3:52 AM2 years ago

Gerardo Martino, the new coach of el Tri, will want to continue with his unbeaten streak, assuring that Mexico is on the right track, because they are in the final for a reason, so it is planned to play the same offensive way to previous games.
3:51 AM2 years ago

Chelsea's Christian Pulisic, who has become one of the young promises for the US national team, will need to provide his starting eleven with an additional spark that can lead them to the title. USMNT are also in a period of adaptation to their new coach.

Guillermo Ochoa, a fundamental piece for the Mexicans to reach this stage. From the beginning of the tournament to having saved the decisive penalty in the quarterfinals vs Costa Rica.
3:49 AM2 years ago
The central referee for this Mexico vs USMNT will be Guatemala's Mario Escobar.
3:48 AM2 years ago

Coach Gregg Berhalter has said that despite the difficulty of the match they are aware of what it means to win the CONCACAF title. They will be an important challenge for Mexico.
3:48 AM2 years ago

The team led by Gerardo Martino has suffered a lot of wear and tear, a situation that is not expected to be significant, after the last two matches have had to be extended to overtime.
3:48 AM2 years ago
Tonight, Mexico will be at home at American soil against USA. El Tri are undoubtedly favourites due to tradition and history, but their football is in a stage of adaptation to Martino's ideology.
3:41 AM2 years ago

The Mexico vs United States game will be played at the Soldier Field Stadium in Chicago, United States. The start of play is scheduled at 8pm ET.
3:39 AM2 years ago
Welcome to VAVEL.com’s LIVE coverage of the 2019 Gold Cup Final game: Mexico vs USA!