Gallos again tries to score the draw.
6:25 PMa year ago

Paolo Yrizar's shot that goes over the arch.
6:18 PMa year ago

Center of Corral that it sent to corner shot.
6:07 PMa year ago

Start the second half.
6:06 PMa year ago
Change of Querétaro

Jair Pereira had the equaliser.
5:41 PMa year ago

Penalty for Querétaro.
5:32 PMa year ago

Actions are stopped for the referee to review the play.
5:27 PMa year ago

Deffensive crossing of Alexis Pérez that avoids the advance of the offensive saga of León.
5:16 PMa year ago

Luis Romo's shot that goes to one side of the goal
5:11 PMa year ago

First play of danger forma Gallos, Castillo was to nothing to Mark the first.
5:05 PMa year ago 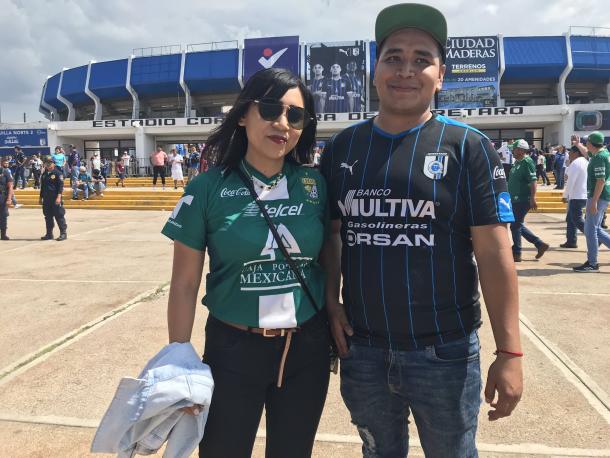 Alcalá, Corral, Romo, Pereira, Pérez, Aboagye, Gómez, Escoboza, Castillo, Triverio, Del Valle.
4:23 PMa year ago
Line-ups will be confirmed shortly.
4:17 PMa year ago
While we wait for the line-ups, we present you the highlights of the Queretaro Femenil game in which they lost 2-1 to Puebla.
4:05 PMa year ago
The pitch looks flawless and all is set for the match to begin in less than an hour.
4:02 PMa year ago
The results of the youth division matches are:

It is less than an hour before this exciting Queretaro vs Leon begins in the Corregidora Stadium.
11:23 AMa year ago
Do not miss a detail of the match with the live updates and commentaries of VAVEL. Follow along with us all the details, commentaries, analysis and lineups for this Querétaro vs León match.
11:22 AMa year ago

How to watch Querétaro vs León Live TV and Stream

If you want to watch the game on TV, your options are: Fox Sports and Imagen tv.

The last triumph that the Queretanos recorded at home against Leon, was last Clausura 2017 with a final score of 2-1
11:19 AMa year ago

León seeks to add to 3

Last matchday the Esmeraldas got the three points at home after defeating Chivas 4-3 in a thrilling game, with that victory they reached 7 points which put them in tenth place.
11:18 AMa year ago

Querétaro the surprise of the tournament

The directed by Victor Manuel Vucetich have had one of the best starts in history. The feathered ones have four victories and a draw which placed them in the first place of the general table.
11:17 AMa year ago

For the first places

Querétaro vs León match will be played at the Esatdio Corregidora, in Querétaro, Querétaro. The kick-off is scheduled at 17:00pm ET.

11:17 AMa year ago
Welcome to VAVEL.com’s LIVE coverage of the Apertura 2019  match: Querétaro vs León!

My name is Fernanda Alejo and I’ll be your host for this game. We will provide you with pre-game analysis, roster updates, and news as it happens live here on VAVEL.