USA 4 - 0 Portugal
7:54 PMa year ago
Full-time: As expected, the USWNT don't get out of second gear and still score four goals against Portugal. The two teams will meet again on Tuesday night at the Allianz Field in Saint Paul, Minnesota.
7:45 PMa year ago
USA 4 - 0 Portugal
7:45 PMa year ago
82' GOAL! The fourth goal does count this time and it's Allie Long who scores it.
7:43 PMa year ago
78' The crowd celebrates a fourth goal but Press won't get on the score sheet (yet) tonight. The ball came off her hand and the goal is ruled out.
7:38 PMa year ago
76' The pace of the game has slowed down a bit and Portugal still can't seem to break through the USWNT, despite six changes made by the home team.
7:32 PMa year ago
68' CHANCE! McDonald goes close as even though she's surrounded by three defenders, she gets her shot off and it comes off the post!
7:31 PMa year ago
Attendance has just been announced and it's a record for USWNT friendlies. 49,504 in attendance.
7:29 PMa year ago
65' Short gets the last touch and Portugal win their first corner of the night. Nothing doing and the hosts regain possession.
7:28 PMa year ago
64' Pugh gets to the byline but there's no one at the back post for the US and Portugal concede the corner. The corner is floated in but comes to nothing.
7:27 PMa year ago
63' SUBSTITUTIONS: Matilde Fidalgo and Carolina Mendes come in for Ana Borges and Diana Silva.
7:25 PMa year ago
60' SUBSTITUTIONS: Casey Short, Mallory Pugh and Allie Long come in for Sonnett, Horan and Brian.
7:23 PMa year ago
58' Play is stopped as Dolores Silva requires treatment.
7:23 PMa year ago
54' CHANCE! Portugal get forward quickly but the final pass lets them down and the USA escape.
7:22 PMa year ago
USA 3 - 0 Portugal
7:22 PMa year ago
52' GOAL! Lloyd makes it three!
7:21 PMa year ago
46' SUBSTITUTIONS: Jessica McDonald, Crystal Dunn and Samantha Mewis come in for Heath, Davidson and Abby Dahlkemper.
7:19 PMa year ago
Half-time: The USWNT are in cruise control here and Portugal have not troubled them at all.
6:46 PMa year ago
38' CHANCE! Joana Marchão saves what would've been the third goal off the line! Lloyd had found room to run again and her final touch beat the goalkeeper but not Marchão.
6:44 PMa year ago
34' Cláudia Neto nutmegs Davidson and puts in a good cross that Emily Sonnett has to stretch to clear. That was Portugal's best attacking move of the game.
6:40 PMa year ago
31' J. SIlva manages to get into the area but Tierna Davidson stands strong and clears the ball away.
6:34 PMa year ago
26' Heath's corner finds Lloyd but she heads the ball wide.
6:33 PMa year ago
25' Not much going Portugal's way here as USA earn another corner.
6:27 PMa year ago
USA 2 - 0 Portugal
6:27 PMa year ago
Brian is completely unmarked when Press sends in the corner kick and all the Chicago Red Stars midfielder has to do is stoop a little to nod it home.
6:26 PMa year ago
18' GOAL! Morgan Brian makes it two!
6:25 PMa year ago
17' Lloyd gets forward and wins a corner for the U.S.
6:25 PMa year ago
16' Jéssica Silva gets off Portugal's first shot but it goes well wide of the goal.
6:20 PMa year ago
12' Heath thinks she has a second but both she and Lindsey Horan who nodded the ball down to her were offside.
6:19 PMa year ago
11' The ball gets through to Press inside the area but she's cut off as Portugal rallies around her.
6:15 PMa year ago
7' The USWNT are looking to win the ball high, which has led to a goal, but now leads to a free kick for Portugal as Heath brings down a player.
6:14 PMa year ago
USA 1 - 0 Portugal
6:14 PMa year ago
Julie Ertz finds Christen Press out wide in space and the Utah Royals forward squares the ball across the goal for Tobin Heath to knock home from close range.
6:12 PMa year ago
4' GOAL! The USWNT pull ahead!
6:09 PMa year ago
Portugal are actually in a diamond midfield instead of a 4-3-3.
6:08 PMa year ago
1' The USWNT start us off!
6:01 PMa year ago
Both teams are now making their way onto the field. Carli Lloyd leads the USWNT out with the World Cup trophy in her hands.
5:54 PMa year ago

Morais; Marchão, Mendes, Rebelo, Neto; Pinto, Do. Silva, Marques; Borges; Di. Silva, J. Silva.
5:36 PMa year ago
The USWNT is on the field for warmups here at Lincoln Field.
5:34 PMa year ago
Carli Lloyd is making her 8th appearance in the Philadelphia area (2 at the Lincoln Field and 6 at Talen Energy Stadium) for the USWNT.
5:33 PMa year ago 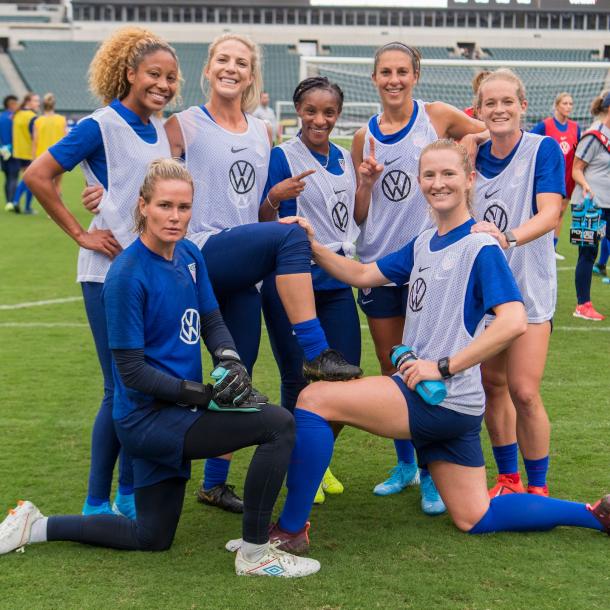 5:07 PMa year ago
Both USA and Portugal national teams are warming up on the pitch as we speak.
5:04 PMa year ago

How to watch USWNT vs Portugal Live TV and Stream

If you want to watch the game on TV, your options are: FS1 for fans in USA and Canal 11 in Portugal.

If you want to directly stream it: fubo.tv

Portugal’s looking to get back on track. How are they doing?

The last time Portugal played was back in April, when they faced Hungary at the Complexo Desportivo FC Alverca. They played two friendlies that month against the same national team and reaped two wins. One of the scores was 2-1 with goals by Vanessa Marques and Monica Mendes. In the next game they beat Hungary by 4-1 with goals by Diana Silva, Carole Costa, Vanessa Marques and Claudia Nieto.

Portugal has a great opportunity to show they mean business in this next friendly against the World Cup champions. We must remember that Portugal has never beat the US and the last time they met was on November 2018, when the US beat them 1-0.

After the good result against Republic of Ireland for 3-0 in Pasadena, California, the team now heads to Philly. According to US Soccer this game has sold more than 45.000 tickets, establishing a new record for a friendly game.

Minnesota, North Carolina and Illinois are the next states where the USWNT will stage and we expect them to keep this trending while they take advantage of the World Cup fever.

USWNT: What coach Ellis has said about the injuries and recent call ups

“With the injuries we currently have to several World Cup players, and with two of our main priorities on the Victory Tour being spreading around the minutes and keeping players healthy for their clubs during this critical playoff push, it made sense to call in Casey and Kristen to give us options and depth for these games against what will be a tough Portugal team. Both players have been performing very well in the NWSL and I know they’ll fit right in with our group for these matches.”
8:44 AMa year ago

USWNT: Some changes on the roster and lineup

Due to the many injuries the USWNT players are facing, coach Jill Ellis decided to add two players that were not part of the roster that won the World Cup back in july, Those two players are Chicago Red Stars defender Casey Short and North Carolina Courage forward Kristen Hamilton.
8:44 AMa year ago
USWNT: Probable lineup

The UWSNT vs Portugal match will be played at the Lincoln Financial Field, in Pensilvania, Philadelphia, United States. The kick-off is scheduled at 7pm ET.
8:41 AMa year ago
Welcome to VAVEL.com’s LIVE coverage of the 2019 Competition match: USWNT vs Portugal!

My name is Melina Gaspar and I’ll be your host for this game. We will provide you with pre-game analysis, roster updates, and news as it happens live here on VAVEL.

USWNT pick up a 4-0 win over Portugala year ago

USWNT vs Portugal Preview: Playing for a record crowd in Philadelphiaa year ago

What Could the USWNT Look Like in Four Years?2 years ago