Take the Orozco penalty. Sargent charged to the right and cut Jonathan.
9:53 PMa year ago

Penalty for the United States. Kings foul on Morris.
9:50 PMa year ago

Mexico is saved. Finish to the post of Morales.
9:46 PMa year ago

Near Uriel Antuna. Ball was found in the area, but Steffen saved.
9:45 PMa year ago

Goool from Mexico. With seconds on the court, Erick Gutierrez defines in a great way.
9:43 PMa year ago

Change of both selections. From Mexico enters Antuna and Gutierrez and leaves Alvarado and Guardado. In the United States, Trapp leaves and Lethglet enters.
9:40 PMa year ago

Javier Hernández is booked for making a complaint against the referee.
9:37 PMa year ago

The Chucky's close by. He went at speed, but his shot was deflected.
9:37 PMa year ago

A shot from outside Andres Guardado's area that goes above Steffen's frame.
9:35 PMa year ago

Mexico counter-attack that ends with a very deflected shot from Jesus Corona.
9:26 PMa year ago

Yellow for Morales for the aggression against Hector Herrera.
9:23 PMa year ago

Blows in the game. Morales' header on Herrera.
9:19 PMa year ago

Seeking to steal the ball at the start, Guardado fouls on McKennie.
9:13 PMa year ago

Jesús Gallardo asked for a penalty hand in favor of Mexico. But the referee Joel Aguilar does not mark anything.
9:11 PMa year ago

Start the second half. Both teams do not make any changes.
8:55 PMa year ago

The first half ends. Mexico beat the United States by the minimum with a goal by Javier Hernández.
8:54 PMa year ago

Morales shoots and goes off the Orozco goal.
8:44 PMa year ago

Roberto Alvarado's center, but no Mexican comes to the second post to finish and Long deflection.
8:43 PMa year ago

Morales' foul on Héctor Herrera in the middle circle, claims by the US player.
8:41 PMa year ago

Jesus Corona fault. It had been left alone in front of Steffen to assist Rodriguez, but the Porto player blew his shot.
8:38 PMa year ago

Jonathan Orozco with a sweep to cut off Christian Pulisic's attack.
8:36 PMa year ago

They were looking for a ball in the area for Gyasi Zardes, but it clears the Mexican defence.
8:30 PMa year ago

Goooool from Mexico. Javier Hernandez opens the scoreboard. Center of Jesus Corona by right, with previous tunnel and Chicharito of head opens the marker.
8:27 PMa year ago

Corner kick to the right, not enough to finish off Diego Reyes.
8:24 PMa year ago

This is what the MetLife Stadium court and grandstand looks like from the heights.
8:22 PMa year ago

With a bit of trouble, but Jonathan Orozco brings a hand to the top of Sergiño.
8:21 PMa year ago

Shot from outside the McKennie area that stops without problems Orozco.
8:15 PMa year ago

Put the hand  Jesus Gallardo and cut the attack of Mexico.
8:13 PMa year ago

Squeeze Mexico from the U.S. exit, looking for a mistake.
8:10 PMa year ago

Jorge Sanchez was looking to get a center, but Long covered it up.
8:08 PMa year ago 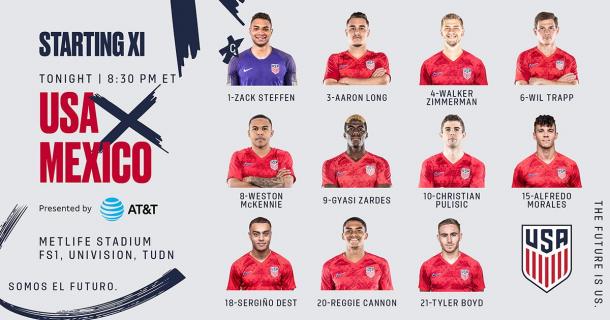 7:38 PMa year ago
Mexico and United States line-ups confirmed for the match that starts in a few minutes.
7:29 PMa year ago
Practically filled the first level of MetLife Stadium. At first glance, the crowd is divided between Mexico and the United States.

7:26 PMa year ago
The MetLife Stadium court is not in the best condition because of the rains in New Jersey this Friday. You can see with the naked eye, the edges of the pieces of field that were glued, only a few days before the meeting.
7:23 PMa year ago
The United States Soccer Federation calls for NO discrimination during the game.
7:20 PMa year ago
This was the arrival of Gerardo Martino, coach of the Tri, at MetLife Stadium. The Argentinean strategist will seek to remain undefeated with Mexico, tonight faces the United States for the second time.

7:13 PMa year ago
A few minutes ago, the United States made the reconnaissance field at the home of the Giants and Jets of the NFL.

7:12 PMa year ago
Despite the sporadic cold and rain in New Jersey, people are making themselves present in the stands at MetLife Stadium.
6:56 PMa year ago
Wearing his home uniform, the black that has been a favorite of the fans, Mexico will come out with this color to play the Classic.
6:45 PMa year ago
6:42 PMa year ago
Mexico National Team arrived to the MetLife Stadium half an hour ago. The Tri's locker room is getting sorted out. 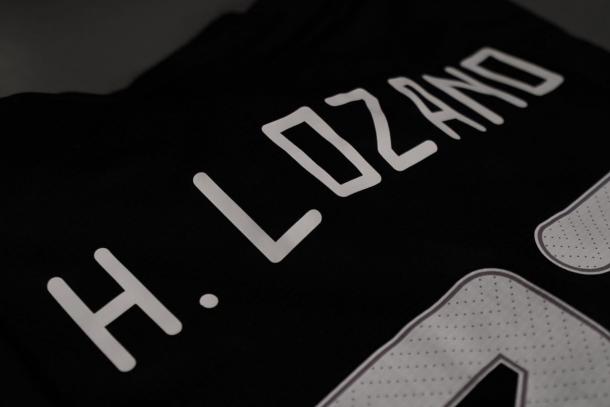 6:39 PMa year ago
As it is always expected when USA faces Mexico, the ticket sales for tonight's game was a complete success. The stadium will be at full capacity.
6:37 PMa year ago

We are less than an hour away for this exciting Mexico vs USA game to start. We will be live from the MetLife Stadium providing you with the best coverage.
12:37 PMa year ago
Do not miss a detail of the match with the live updates and commentaries of VAVEL. Follow along with us all the details, commentaries, analysis and lineups for this Mexico vs United States match.
12:36 PMa year ago

How to watch Mexico vs United States Live TV and Stream

If you want to watch the game on TV, your options are: TUDN and FOX Sports 1.

If you want to directly stream it: TUDN, FOX.

All those called by Gregg Berhalter will be available and will plant the best team to seek victory.
12:33 PMa year ago

Mexico has already confirmed casualties for this match. Luis Rdoríguez and César Montes will not be able to be taken into account due to muscular problems.
12:31 PMa year ago

The United States is still in the process of renewal

Having fallen in the Gold Cup final, the United States will continue their project of young players with great projection. Against Mexico, once again they are presented with a new opportunity to strike a blow of authority in the region and grow to begin the Nations League process.
12:29 PMa year ago

After the Gold Cup, Gerardo Martino has called 31 players for these two matches. Respecting his promise to call the 23 players who won the Gold Cup in the summer. In addition, Javier Hernandez, Hector Herrera, Miguel Layun and Hirving Lozano have returned.
12:26 PMa year ago