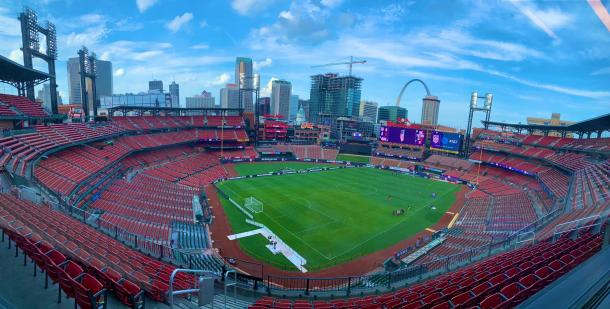 5:31 PMa year ago
Expectations for USMNT against Uruguay should be tempered. Given that Uruguay is one of the best teams in the world, a loss should surprise no one. However, the US fans do expect to see an improvement on the USMNT game style.
5:25 PMa year ago

We are less than hour and half away from this exciting International friendly game USMNT vs Uruguay.
2:04 PMa year ago

For Sargent, he was an upcoming star player for the U.S. U-17 Residency Class in Bradenton, Florida. He was then named captain and lead his team to the quarterfinals of the U-17 FIFA World Cup in India in 2017.
2:04 PMa year ago

The match tonight is special for a few players for the USMNT. Tim Ream and Josh Sargent are products of U.S. Soccer Development Academy youth club St. Louis Scott Gallagher. Ream also played for St. Louis University collegiately before enduring an 11-year career as a constant starter on the backline for Fulham FC.
2:04 PMa year ago

This is the seventh time that Uruguay will meet the USMNT, following a 2-1 win over Costa Rica this past Friday. Giorgian De Arrascaeta -- Flemengo midfielder -- put Uruguay in front with a penalty kick. Jonathan Rodriguez got the go-ahead goal late in the second half to give La Celeste the victory.
2:03 PMa year ago

Looking back at the 3-0 loss to Mexico, star-forward Javier “Chicharito” Hernandez opened the scoring in the 21st minute. Erik Gutierrez and Uriel Antuna sealed the deal with goals four minutes apart in the second half to put the final nail in the coffin. Josh Sargent had the chance to erase the clean sheet with a penalty kick that was eventually saved. At 24 years, 150 days, the USMNT starting XI was the youngest put out by head coach Gregg Berhalter in 2019.
2:03 PMa year ago

Previously with the USMNT

The USMNT are coming into this match after getting drubbed by CONCACAF rivals Mexico by a scoreline of 3-0. This matchup is the final match of international friendlies. The USMNT begin CONCACAF League A action next week.
2:03 PMa year ago

The USMNT vs Uruguay match will be played at Busch Stadium in St. Louis, Missouri. The kick-off is scheduled for 8:00pm ET.
2:02 PMa year ago

Welcome to VAVEL USA’s LIVE coverage of USMNT vs Uruguay! My name is ____ and I will be your host for tonight’s match! We will provide you with pre-game analysis, roster updates, and news as it happens here on VAVEL
Invalid dateInvalid date