Historic win for Canada Soccer. After 35 years, the Canadian team beat USA.
8:24 PMa year ago
Lucas Cavillini came off the bench to score the second goal for his national team.
8:23 PMa year ago

The Maple Leaf team scores the 2-0. Historic win tonight for Canada at home.
8:22 PMa year ago

USMNT lacks a leader. Bradley is far away from his best level.
8:20 PMa year ago

Arriola crosses once again, but the midfielder can't provide one decent cross tonight.
8:18 PMa year ago

The game has heated up. USA players can't believe what is happening tonight.
8:14 PMa year ago

Canada is putting all their focus on counter attacks with Cavallini as the spear head.
8:10 PMa year ago

Lucas Cavallini gets booker after bringing down Davies.
8:10 PMa year ago
The influence of this momentary victory on the hexagonal classification would be HUGE.
8:06 PMa year ago

Steffen saves his goal. Amazing one-handed save avoids a dreadful 0-2.
8:01 PMa year ago
The last time Canada defeated USA, it was 35 years ago.
7:58 PMa year ago

USMNT trying to recover from the goal. Berhalter's team is looking to find spaces on the right flank.
7:56 PMa year ago

Canada started off the second half with more pass efficiency. The Maple Leaf team goes ahead on the score board.
7:52 PMa year ago

Another great cover by Long. The Red Bulls' defender is showing why he is a starter for Coach Berhalter.
7:49 PMa year ago
Aaron Long and Alphonso Davies matchup tonight has not dissapointed. The Canadian's speed has had Long on his toes.
7:45 PMa year ago

What a miss from David. Canada's forward received a magnific cross, but touched the ball just wide.
7:39 PMa year ago

Game is resumed. Second half starts NOW.
7:25 PMa year ago

We're goalless at half time. Canada has made Berhalter's team very uncomfortable, but have not capitilized any of the chances to open up the scoreboard.
7:23 PMa year ago

Pulisic cuts inside and shoots looking for the far post of Borjan's goal, but his shot is blocked before it reaches its destination.
7:22 PMa year ago

We'll have a minute of added time to this first half.
7:18 PMa year ago

Through ball for Davies. He passes it over the keeper looking for Arfiel, but the US defense does a good job to get to the ball.
7:14 PMa year ago

USA struggles to get out of their own half. They finally manage to get some offensive going and earn themselves a corner kick.
7:09 PMa year ago

Corner kick that Borjan is able to get his hands on it. He gets fouled and Canada will have posession again.
7:07 PMa year ago

USMNT go through a lot of trouble to create offensive game. Sargent has barely participated and has little contact with the ball.
7:05 PMa year ago

Through ball for Davies. Steffen has to go out to reduce  space while Ream steals the ball from the Canadian footaballer.
7:02 PMa year ago

McKennie and Fraser have a confrontation without the ball.

Good cross looking for Sargent, but the striker is unable to reach the ball and head it in.
6:55 PMa year ago

Pulisic gives a good pass to Morris who strikes it, but his shot is blocked before it reaches the goal.
6:54 PMa year ago

Roldan tries to pass to his keeper, but leaves it short.

Jonathan David has two chances to score, but Steffen makes a save on the first one and the ball goes wide on the second one!

Davies outruns Ream in the wing. He tries to pass to David, but the defense is able to clear it!
6:49 PMa year ago

Davies strikes the ball from a distance, but Steffen does a good job at containing it.
6:48 PMa year ago

Alphonso Davies was through on goal, but the off-side trap is effective!  It will be a free-kick for the USMNT.
6:45 PMa year ago

Liam Fraser has to come on to replace the injured Kaye.
6:43 PMa year ago

Kaye seems to have pulled a harmstring. Canada's medical team comes in to examine him to see if he can continue.
6:42 PMa year ago

Both teams attempt long possessions as their attacking method. The home team has more time with the ball in these starting minutes.
6:37 PMa year ago

The match begins! Canada and USA are now competing in this CONCACAF Nations League match!
6:33 PMa year ago

Canada vs USMNT is set to begin!

National anthems now play at BMO Field as we get ready to get this match underway!
6:31 PMa year ago

Both teams are ready to step onto the pitch for their CONCACAF Nations League match.

Canada will is dressed in all red while USMNT is wearing its white kit.

Another look at tonight's venue

Toronto's BMO Field field is starting to fill with fans from both nations.  We're just a few minutes away from kick-off! 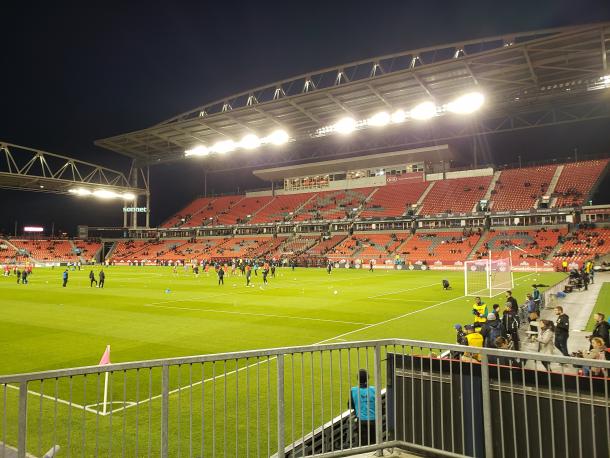 The home team are now doing their pre-match exercises at BMO Field. 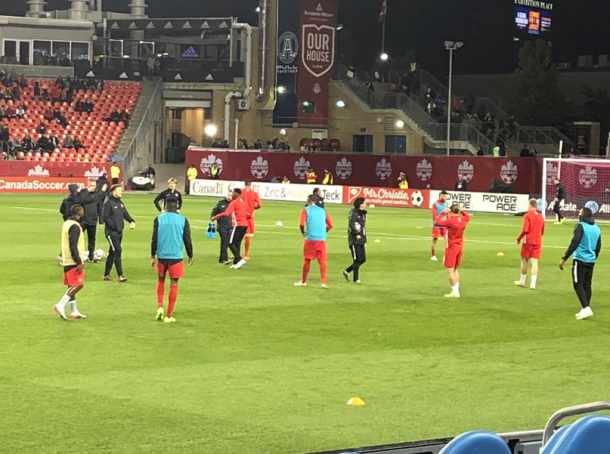 Sargent will be the main striker for USMNT tonight

Head coach Gregg Berhalter has named Josh Sargent the starting striker ahead of Columbus Crew SC main man Gyasi Zardes ahead of the match. “Whether it’s Josh or Gyasi or whoever, we’re comfortable with who we have as options,” said Berhalter.
6:02 PMa year ago

How does the Nations League work?

Canada, USA and Cuba share Group A of the League A of this competition.

The winner of the three team group will advance to the Nations League semifinals. The top two finishers will clinch a 2021 CONCACAF Gold Cup berth.

Home or abroad, we wear these colors with pride. 🇺🇸⚽️

Your #USMNT starting XI to face 🇨🇦 in tonight’s @CNationsLeague match in Toronto.

Canada's line-up for the match

BMO Field's pitch looks impecable for the match between the northern-most members of CONCACAF. The city of Toronto has an expected temperature of 55ºF during the game. Overall a great setting for an international match! 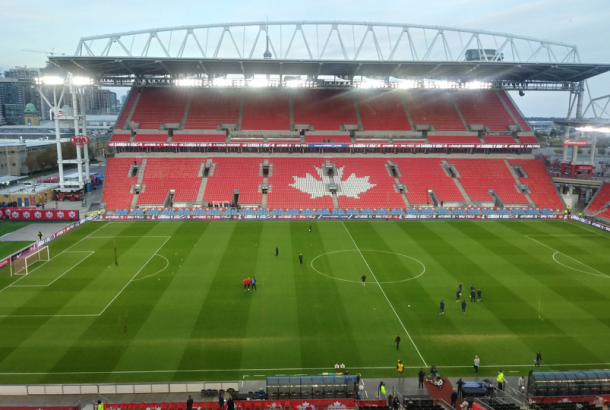 The USMNT recognizing the pitch they will play on this evening

We're ready to bring you the best actions from this CONCANCAF Nations League match between Canada and USA.

The game is set to begin in less than an hour and it will take place at Toronto's BMO Field.

Here is the projected lineup for the home side. They are projected to lineup in a 4-2-1-3 lineup. Canada is managed by John Herdman.

The USMNT will look to be starting in a holding 4-3-3 formation. The USMNT is lead by former Columbus Crew SC manager Gregg Berhalter.

How to watch Canada vs USA: Live TV and Stream

You can catch the match on ESPN2, UníMas, TUDN.

You can stream the match on OneSoccer.ca, or stay tuned here to VAVEL USA!

11:25 AMa year ago
Needless to say, Canada needs the support more than ever. Borjan is calling out Canada fans, saying “Support us like you do Toronto FC.”

A member of the Canadian Soccer Association has stated that almost 15,000 tickets had been sold as of Monday. The supporters section is really close to being sold out. The current capacity of BMO Field sits approximately 30,000 after all renovations. The original capacity sat 21,556.

For Canada, they need all the support they can get.

Canada national team netminder Milan Borjan is encouraging fans to show up to the match and support the team. “A lot of people don’t believe in this team,” he says. “You could see that with the fans.” Borjan is referring to the 10,224 fans that showed up to BMO field for their 6-0 win against Cuba.

Now, with their southern neighbors coming to town, the team is hoping for a bigger and better turnout than before.

The USMNT hold a 16-9-10 all-time record against Canada, and are currently unbeaten in their last 17 matches.

Canada’s last win? A 2-0 victory back in an International Friendly in 1985.

The USMNT won their last match against Cuba, winning 7-0.

Weston McKennie notched a hat-trick within the first 15 minutes of the first half, with Jordan Morris, Josh Sargent and Christian Pulisic following behind with a goal of their own. The USMNT were also gifted an own goal, en route to the victory.

With the win, that matches the second-largest margin of victory in team history. The seven goals also ties for third-most goals scored in a game by the USMNT.

This match will be played at BMO field in Toronto, Ontario. Kickoff is scheduled for 7:30 pm EST.
11:21 AMa year ago
Welcome to VAVEL.com’s LIVE coverage of the 2019 CONCACAF Nations League: Canada vs USA.

My name is Alan Nunez and welcome to VAVEL USA’s LIVE coverage of the 2019 Nations League match between Canada and the United States Men’s National Team.

Follow along as I will provide you live match analysis, lineup updates and score results, right here on VAVEL USA!

Real Madrid looking to finish strong vs Shakhtar 5 days ago