12:30 AM10 months ago
We thank you for joining VAVEL for this match!

Seattle Sounders does it!  They're the Western Conference Champions!
12:11 AM10 months ago

Nouhou Tolo has a one-one-one against Miller, but the keeper prevails!
12:10 AM10 months ago

Pérez attempts from a dsitance, but the ball is deflected.
12:09 AM10 months ago

Diomande tries a heel kick towards goal, but it's over the bar.
12:08 AM10 months ago

Six minutes of added time for the second half.
12:05 AM10 months ago

Ruidíaz sets up a counteratacck. Smith fails to see a teammate that was running free in the middle and the chance is wasted.
12:02 AM10 months ago

Ruidíaz is down after being contacted on the face. The medical staff checks on him.
11:59 PM10 months ago

Atuesta tries for goal, but it's well above the target.
11:59 PM10 months ago

Yellow card for Leerdam after that foul on Vela.
11:59 PM10 months ago

Vela tries to escape the defense, but is fouled from behind. We'll have LAFC free-kick.
11:55 PM10 months ago

Long ball to Diomande, but the striker is unable touch it and score.
11:55 PM10 months ago

Diomande attempts to look for goal, but his strike goes wide.
11:52 PM10 months ago

Low-cross from Vela cleared by Arreaga before it could reach its target.
11:50 PM10 months ago

Once more, the ball hits the hand of a Sounders defender but the referee decides there's no penalty.
11:47 PM10 months ago

Segura with a header straight to Frei's position.
11:47 PM10 months ago

LAFC argues that there's handball inside the box from Arreaga!

The ref and VAR do not see it that way!

Roldán finds another rebound anad attempts a volley! The ball is just wide!
11:44 PM10 months ago

Ruidíaz's fantastic strike for the 1-3

Ruidíaz recieves a ball outside the box from Lodeiro and hits the bottom low corner to increase the lead!
11:41 PM10 months ago

After 10 minutes of total control by LAFC, Seattle Sounders have gathered possession of the ball with more units in midfield.
11:35 PM10 months ago

Rossi crosses but Diomande is unable to head it to equalize!
11:35 PM10 months ago

Lodeiro steals a ball in midfield, sees Miller is away from goal and attemps to suprise him! The ball is just above the bar!
11:34 PM10 months ago

Great run by Morris who passes pack to Ruidíaz. The Peruvian strikes it on his first touch and the ball goes very near the post!
11:33 PM10 months ago

With Diomande on the pitch, Vela begins to play a little lower on the field and having more contact with the ball.
11:32 PM10 months ago

Blackman catches a rebound an tries for goal. The ball is wide!
11:30 PM10 months ago

Rodríguez will give up his place to Diomande!
11:28 PM10 months ago

Roldán and Vela bump into each other. The Sounders footballer remains on the ground.
11:25 PM10 months ago

Good cross from Harvey, but Frei gets his fingertips on it to clear it!
11:24 PM10 months ago

We're underway with the second half of the Western Conference Final!
11:23 PM10 months ago

Can Seattle Sounders hold on?

They're only 45 minutes away from going to the MLS Cup final!

Don't miss the second half of the game! 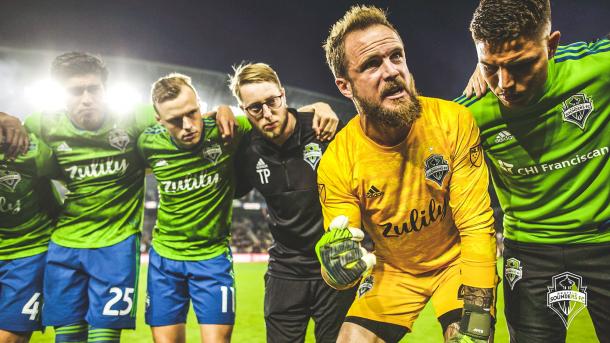 Can LAFC make a comeback?

Don't go anywhere! The second half is underway in this Western Conference Final! 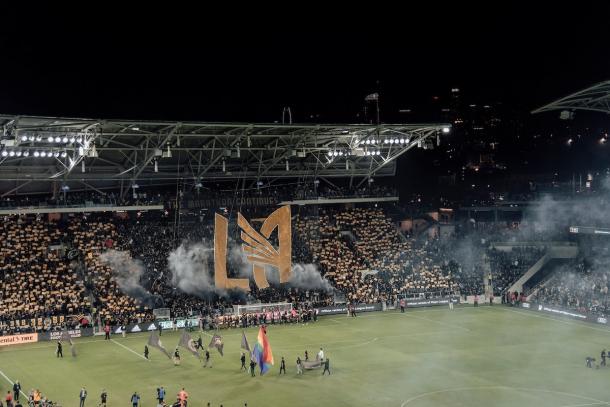 We go to the break with Seattle in front. The away team has made LAFC struggle a lot and are 45 minutes from qualifying to the MLS Cup Final.
11:08 PM10 months ago

LAFC argues there was a handball in the box after a shot by Vela, but the officiating body does not signal for it.
11:07 PM10 months ago

Blessing wont' be able to continue. Kaye comes in to replace him.
10:58 PM10 months ago

Blessing is being checked by the medical staff as he shows signs of pain on his right leg.
10:57 PM10 months ago

Ruidíaz finds some space, but this time his shot goes over the bar.
10:54 PM10 months ago

Contact on Vela inside the box. LAFC asks for a penalty kick, but the referee says play on.
10:53 PM10 months ago

Good ball for Rossi, but he's caught offside as he was looking to send a cross.
10:50 PM10 months ago

It seems Bob Bradley's game plan is not being executed correctly. The LAFC coach paces nervously while giving instructions to his players.
10:47 PM10 months ago

Lodeiro's strike to give Seattle the lead

Lodeiro puts Seattle ahead with this beauty 😯 pic.twitter.com/Qor7JeBaN8

Lodeiro finds space outside the box and makes a great goal! Seattle leads!
10:40 PM10 months ago

Ruidíaz recieves the ball, makes a great turn and then shoots to leave Miller with no chance!

Rodríguez wins the ball on the wing and strikes to near post, but Frei reacts very well!
10:37 PM10 months ago

ATUESTA, WHAT A FREE KICK! pic.twitter.com/rBxl17FGe1

Atuesta takes the free-kick and makes an awesome goal!

First show of talent by Vela. The top-scorer does a Zidan Roulette and gets fouled! Free kick for LAFC!
10:30 PM10 months ago

Roldán argues there's an elbow to his frace from Blessing. The game is stopped so the ref can check on the Sounders' player.
10:27 PM10 months ago

Ruidíaz attempts a shot from outside the box. The strike is easily caught by Miller.
10:26 PM10 months ago

First attempt by Roldán. His header goes above the bar!
10:23 PM10 months ago

Both teams fight very intensely in midfield! No clear chances in the first minutes of play!
10:18 PM10 months ago

The ball moves and the MLS Western Conference Final is underway!
10:03 PM10 months ago

Everything ready for kick-off!

Both teams are prepared to get this match underway!

A look at Sounders' warm up!

For a place in the MLS Cup final!

The winner of tonight's match will be our Western Conference Champion and will compete for the MLS Cup!

LAFC hosts MLS Cup if they win, while Seattle would travel to Atlanta or host Toronto if they come out on top tonight.

LAFC's supporters are all set!

While the rest of the stadium is yet to fill up, LAFC's supporter group has already taken their position behind one of the goals.
9:40 PM10 months ago

Both teams are now on the pitch to do their pre-match exercises!

Who will prevail tonight?

Seahawks have done the same for their stadium pals!

The LA Rams send a message of suppor for their neighbors!

We're thirty minutes away from kick-off in this LAFC vs Seattle Sounders live from the Banc of California Stadium!

Seattle Sounders is in the house!

Seattle Sounders will wear their traditional colours for this Western Conference Championship game!

The #LAFC Starting XI vs. @SoundersFC.

We can expect a great atmosphere tonight!

We can expect a lot of black and gold in the stands with the home team providing towels in those same colors too!

A look at the pitch in the Banc of California Stadium 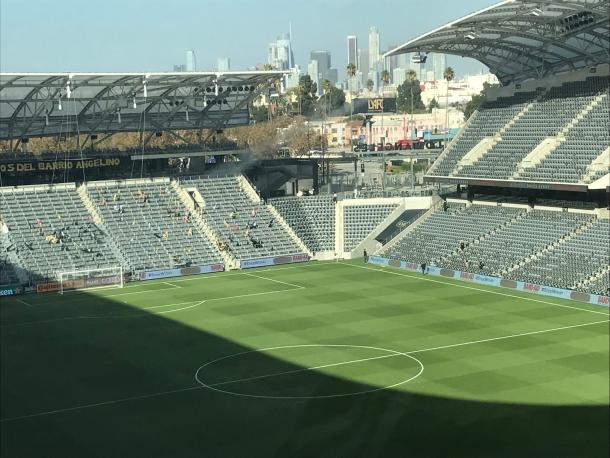 Seattle Sounders' fans have made the trip to LA in order to support their team!

Will they return home with the Western Conference title?


2:38 AM10 months ago
Do not miss a detail of the match with the live updates and commentaries of VAVEL. Follow along with us all the details, commentaries, analysis and lineups for this Los Angeles FC vs Seattle Sounders match.

How to watch LAFC vs Seattle Sounders Live TV and Stream

If you want to watch the game on TV, your options are: ESPN, TSN, TVAS, ESPN Deportes

The striker, who had previously found success in Mexico's Liga MX, came to MLS looking to make a difference and he sure has.

Ruidíaz led Seattle with 11 goals this season, as well as having one goal and three assists in Seattle's two playoff matches in 2019.

The Peruvian has yet to face LAFC in his one and half seasons in MLS as he was sidelined by injury during both regular season meetings. Can the first meeting be a great one for Ruidíaz?

“This is why we play—for us to get this far and actually be playing for a trophy." 👊

LAFC's One to Watch: Carlos Vela

The holder of the record for most goals in a sigle season in MLS was key in LAFC's last fixture with two goals.

His form has been extraordinary during the whole campaign. Vela has scored 14 goals throughout the last 10  matches.

Seattle Sounders are in the playoffs for an MLS-record 11th consecutive season, and have been able to dispatch their first two Western Conference rivals, beating FC Dallas, 4-3, and Real Salt Lake, 2-0.

Against LAFC, they will need to perform at a higher level as reaching the MLS Cup Finals won't be easy feat.

Bob Bradley's side won the Supporter's Shield and reached the Conference Finals after finally defeating city rivals, LA Galaxy, in the derby.

Can they finish up this year with the MLS Cup title? 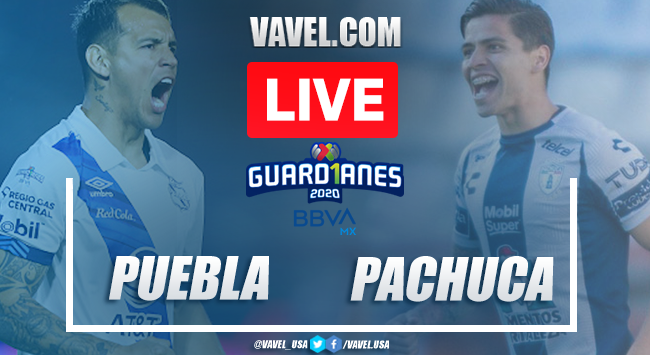