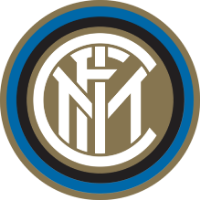 Lazaro comes in instead of Biraghi.
4:30 PMa year ago

Vidal with a shot that scratches the right post of Handanovic.
4:29 PMa year ago

At the moment, Inter is eliminated from the Champions League. Brandt just scored against Slavia Praha for Dortmund placing them as second.
4:28 PMa year ago

Lukaku gets inside the box. As Neto approached him, he ran towards the endline and was unable to get a shot in.
4:24 PMa year ago

Griezmann and Rakitic leave their spots on the field for Suárez and De Jong.
4:20 PMa year ago

Griezmann with a low-driven shot. Handanovic walks two steps forward to position himself and then dives to make the save!
4:17 PMa year ago

Barcelona attemps to hit Inter on the break, but Firpo makes a bad pass looking for Griezmann and the chance is wasted.
4:13 PMa year ago

Rakitic attemps another shot which is deflected by the defense. We'll have a corner kick for Barcelona.
4:11 PMa year ago

We're underway with the last 45 minutes of the 2019 UEFA Champions League group stage.
3:51 PMa year ago

At the break, the score is tied. At the moment, Inter is reaching the Round of 16 as Slavia Praha just equalized in their game against Dortmund.
3:50 PMa year ago

Two minutes of added time for the first half!
3:49 PMa year ago

Lautaro Martínez fights for the ball and leaves it just outside the box for Lukaku to strike it.

The Belgian powers it in to a shot near the left post!

Barcelona tries to slow Inter down with long posessions.
3:41 PMa year ago

Lukaku crosses look for two teammates inside the six yard box. D'Ambrosio heads it just wide of the right post!
3:39 PMa year ago

Lautaro Martínez with a great reception. He tries to finish to the near post, but Neto responds well again!
3:38 PMa year ago

Lenglet sees a yellow card after placing his arm near D'Ambrosio's face as they fought for an elevated ball.
3:36 PMa year ago

Lenglet finds the ball right at the penalty spot. He looks to power it into the net, but she shoots wide!
3:35 PMa year ago

Rakitic takes a free kick looking for goal, but Brozovic's head is in the way to deflect the ball.
3:34 PMa year ago

Rakitc shoots, but it's too wide to worry Handanovic.
3:32 PMa year ago

Vecino attempts another shot from a distance, but it's really easy for Neto.
3:29 PMa year ago

Griezmann passes to Vidal who is inside the box. The Chilean leaves it with a quick flick to Carles Pérez who finishes it!
3:25 PMa year ago

Biraghi crosses from a free-kick. No one is able to get a header in and Neto has to make a good effort to catch the ball.
3:22 PMa year ago

Lukaku passes to Biraghi who strikes with his left. Neto dives to save Barcelona from conceding!
3:17 PMa year ago

Vecino attempts a shot, but it's off-target.
3:15 PMa year ago

Dortmund is winning their match against Slavia Praha and leaving Inter out of the Round of 16.
3:13 PMa year ago

Inter recovers a ball in Barcelona's own half. Lukaku has a chance to shoot inside the box, but Lenglet is there to dive and send it to corner kick.
3:12 PMa year ago

Pérez with a shoot looking for the far post, but Handanovic is there to make the diving save!
3:10 PMa year ago

Lukaku finds a rebound and scores with a powerful shot, but he was offside!
3:08 PMa year ago

Valero finds D'Ambrosio with space inside the box. The shot is well over the crossbar.
3:04 PMa year ago

The match between Interanazionale and Barcelona is now underway!
2:57 PMa year ago

We're ten minutes away from our kick-off at Estadio Giuseppe Meazza in Milan.

Both squads are ready for this Matchday 6 clash!

Both sides finishing their warm up prior to the match 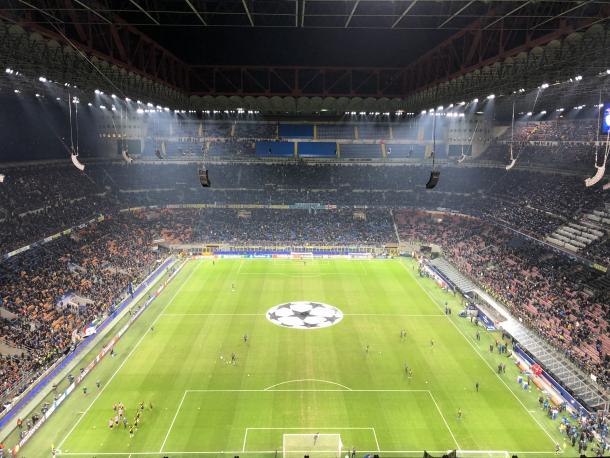 Plenty of commemorative merchandise ahead of tonight's match 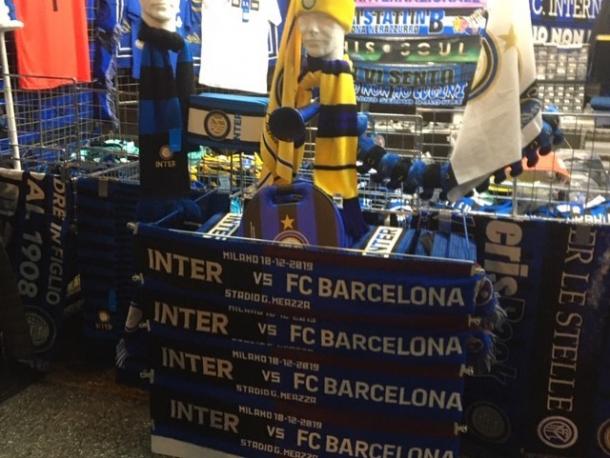 The nerazurri shirts are awating at Inter's locker room 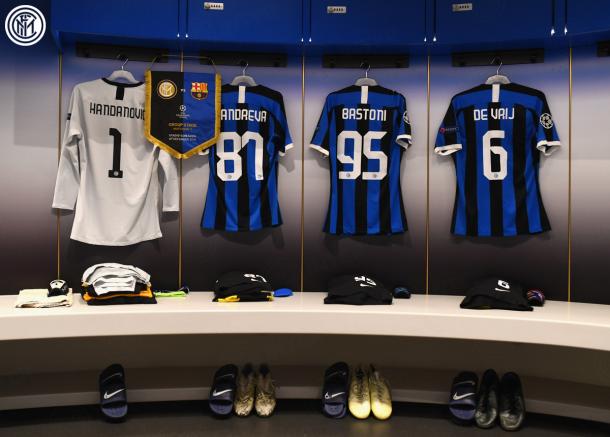 Barcelona is also at San Siro

Conte and his men have arrived at the stadium 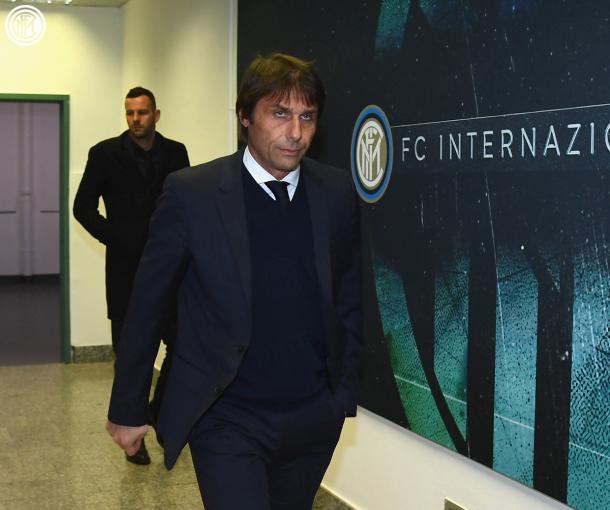 Carles Pérez will make his first apperance in the Champions League

2:09 PMa year ago
Barcelona is looking for back-to-back away wins in Europe's premiere comepetition for the first time since 2015.
2:02 PMa year ago

San Siro ready for the match

We’re ready to bring you all the action from Milan in this UEFA Champions League group stage match.
2:48 AMa year ago
Do not miss a detail of the match with the live updates and commentaries of VAVEL. Follow along with us all the details, commentaries, analysis and lineups for this Inter Milan vs FC Barcelona match.
2:48 AMa year ago
Four of the previous six matches between Inter and Barça at Estadio Giuseppe Meazza have ended in a draw.
2:46 AMa year ago

Inter will have a powerful squad for the match

Lautaro Martínez and Romelu Lukaku might be accompanied by a returning Alexis Sánchez.

The Chilean player, who defended Barça's colours earlier this decade, started practicing again with his teammates after being sidelined in a match with his national team.

Barcelona leaves out important men for this match

It will be the tenth match between the Catalan and Italian squads. The record is positive for Barça with five wins, three draws and one loss.
2:38 AMa year ago

In their previous encounter early this year, Barça  came out on top with a 2-1 scoreline over Inter.

Lautaro Martínez had the Italians in front in the first mintues, however Luis Suárez scored twice to turn it around and gave Barcelona the win.

How to watch Internazionale vs Barcelona Live TV and Stream

If you want to watch the game on TV, your options are: TUDN and TNT to broadcast.

If you want to directly stream it Univision NOW & Watch TNT.

Godín and Conte spoke to the press ahead of the match

Antonio Conte and @diegogodin speaking to the press on the eve of #InterBarçahttps://t.co/8jgO0xnmsZ

Barcelona will use an alternative squad

Barça, on the other hand, have already assured qualification to the next round as top of their group and have nothing to gain or lose in this match.

Valverde left out of the squad list usual starters such as Messi, Piqué and Roberto. Therefore, we can expect some younger players in tonight's game.

Inter looking to stay alive in the Champions League

Internazionale hosts Barcelona in the last matchday of the group stage looking to clinch a spot in the Round of 16 of the tournament.

Currently tied with Dortmund in points, the nerazurri must get a positive result at home if they look to progress.

2:21 AMa year ago
The Internazionale vs FC Barcelona match will be played at the Giuseppe Meazza, in Milan, Italy. The kick-off is scheduled at 3:00pm ET. 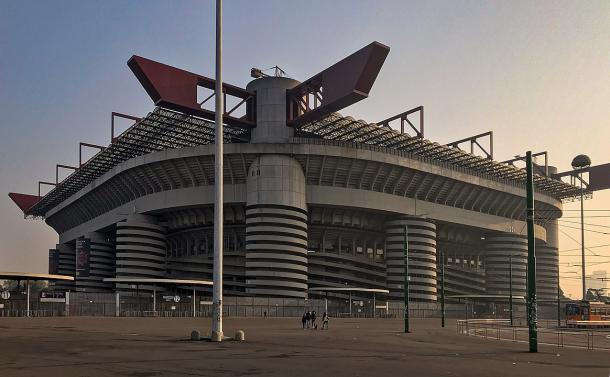