Highlights from the match!

Ansu Fati's goals give Barcelona an important win in their search for the La Liga title!
5:56 PMa year ago

Rochina with a shot over the bar.
5:53 PMa year ago

Rochina strikes from outside the box. The powerful shot fails to be stopped by Ter Stegen.
5:52 PMa year ago

Messi looks for the top corner with a curved shot. It's wide!
5:49 PMa year ago

Roger is all alone against the keeper. He tries to put so much power behind his shot that he sends it over the bar!
5:48 PMa year ago

Riqui Puig comes in instead of Ansu Fati.
5:43 PMa year ago

Bardhi is found by a good low-cross,  he shoots but Ter Stegen again saves!
5:42 PMa year ago

Luuk de Jong leaves his place on the pitch for Arthur.
5:40 PMa year ago

An injured Vukcevic is replaced by Bardhi.
5:36 PMa year ago

Messi one on one with the keeper, but Fernández denies him again!
5:35 PMa year ago

Ansu Fati with the overhead kick, but the ball is wide from the target.
5:33 PMa year ago

Messi with a powerful shot straight at Fernandez's hands.
5:32 PMa year ago

Griezmann is replaced by Sergi Roberto.
5:31 PMa year ago

Hernani with another good attempt! This time he cut inside and looked for the far post with his left. The ball is just wide!
5:29 PMa year ago

Hernani finds a pass on the edge of the box and tries to finish it. Ter-Stegen makes the save!
5:26 PMa year ago

Alba is also admonished after protesting the decision.
5:26 PMa year ago

Piqué sees a yellow card after a strong challenge on Borja Mayoral.
5:25 PMa year ago

Levante has good minutes with long ball possessions, but they fail to create any real danger.

It seems that Barcelona feels that the match is won for them.

Hernani and Mayoral come in instead of Melero and and Morales.
5:19 PMa year ago

Messi recieves the ball from De Jong and goes for goal. The keeper Fernández is well-positioned to make the save.
5:18 PMa year ago

Melero shoots, but Ter Stegen is able to make the save without trouble.
5:15 PMa year ago

Morales shoots and Ter Stegen has to deflect leaving the ball inside the box. With the goal wide open, Rochina sends it over the bar.

Triple chance for Barcelona! Griezmann, Messi and finally Busquets attempt shots! The ball ends up over the goal.
5:11 PMa year ago

Barcelona continues dominating the match. No rush from the blaugranas to score their third goal.
5:05 PMa year ago

We're underway with the last 45 minutes of the match between FC Barcelona and Levante UD.
4:53 PMa year ago

Ansu Fati with the second goal of the evening

ansu fati with the deadly finish and leo Messi with the beautiful pass... #barlev pic.twitter.com/bLOWd79CuX

Two back-to-back goals from Ansu Fati are giving Barcelona the win at the break.
4:50 PMa year ago

Semedo with a great run down the right wing. He looks for Griezmann who fails to make a good finish and the chance is wasted!
4:48 PMa year ago

Barcelona lures Levante with some play near their own box. After the ball crosses midfield, they're finding large spaces to hurt the away team.
4:45 PMa year ago

Fati tries another shot after a pass from Alba. This time it's off-target.
4:39 PMa year ago

Semedo receives the ball from Messi. The full back cuts inside and shoots with his left. The ball goes straight at the crossbar!
4:36 PMa year ago

Another goal by Fati! This time he finishes it with his left with clear collaboration from the keeper.
4:34 PMa year ago

Through ball for Fati who outruns his defender and finishes it to the near post!
4:33 PMa year ago

Aitor Fernández with an amazing save to a shot by Leo Messi!
4:30 PMa year ago

Fati gets into the box. As he tries to shoot, Postigo gets in his way to deflect his attempt
4:27 PMa year ago

Rakitic attempts a shot, but it goes well over the crossbar.
4:25 PMa year ago

Melero almost nets an own goal! From a Barcelona corner kick, his clearance attempt ends up really close to going in!
4:23 PMa year ago

Levante with the quick play. Morales was looking to find Martí, but Lenglet has to slide to save Barça from conceding.
4:22 PMa year ago

Griezmann one-on-one with the keeper, but he has a bad finish and the ball is too wide!
4:21 PMa year ago

Aitor Fernández gives the ball away to Messi. He tries to shoot quickly and score, but the keeper fixes his mistake and makes the huge save.
4:18 PMa year ago

Messi finds the ball on the edge of the box. The strikes with the outer face of his left foot and the ball ends up just wide from the post!
4:14 PMa year ago

Miramón sends an excellent cross. Martí and Campaña get in each other's way and the chance is wasted.
4:13 PMa year ago

Toño fouls Semedo just outside the box and Barcelona will have a free kick.
4:10 PMa year ago

Rochina tries a cross, but Ter-Stegen gets to the ball before any of the attackers could create any danger.
4:08 PMa year ago

Barcelona begins pressuring Levante with lots of players in the opposing half. They manage to get a corner kick.
4:04 PMa year ago

The game is underway at Camp Nou!
4:04 PMa year ago
Paco López and Quique Setién greet each other, while the 22 on the field get ready for the match.
4:01 PMa year ago

Everything set for kick off!

Both teams step onto the pitch and we're ready for the start of Barcelona vs Levante!
3:55 PMa year ago
We're five minutes away from kick-off! Don't go anywhere!
3:50 PMa year ago
Barcelona has suffered 4 defeats in its first 21 League matches. This is the highest number of losses at this point of the season since 2003-2004.
3:40 PMa year ago
Levante has not lost four consecutive matches since March 2019. At this time, they were coached by Juan Ramón Muñiz.
3:37 PMa year ago
Barcelona will wear their traditional blaugrana kit, while Levante will feature an uniform in white to distinguish themselves from the home team.

The away team steps onto the pitch to do their warm up!

Can Levante do it?

A win tonight against Barcelona would make Levante the first team to beat them twice in the same season.

The last teams to defeat Barça in both La Liga fixtures were Real Madrid and Villarreal in the 2007-2009 season.

3:32 PMa year ago
Campaña has assited in the last three Levante goals in away games in La Liga.
3:29 PMa year ago 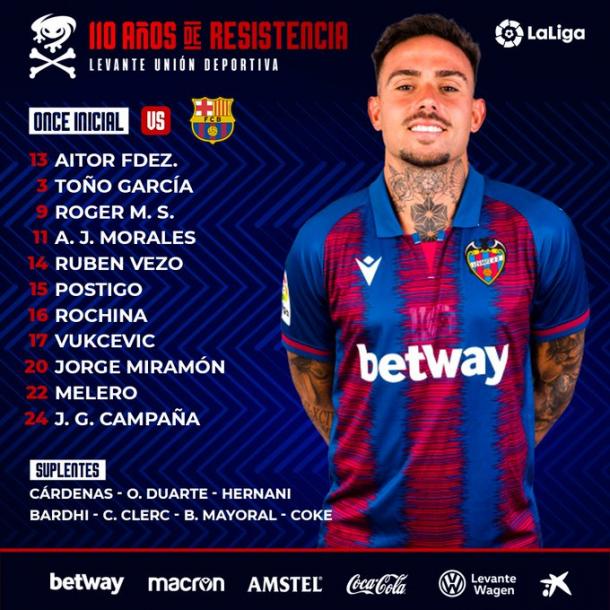 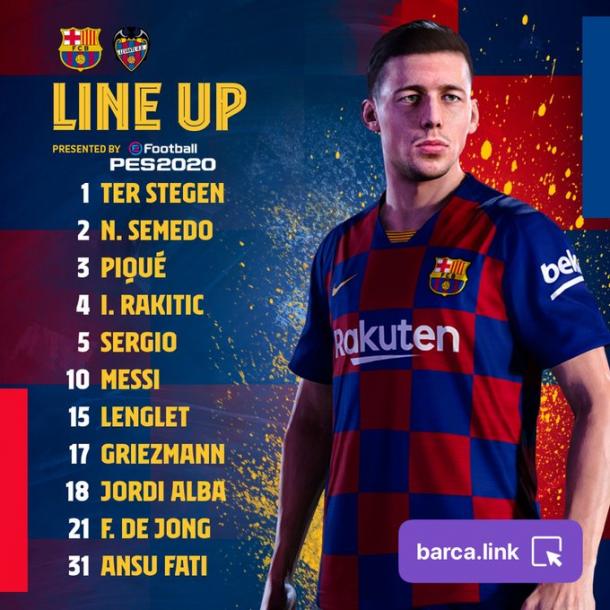 Can Messi do it again?

Messi has scored at least once in all seven of Levante’s last visits to the Camp Nou.
3:17 PMa year ago 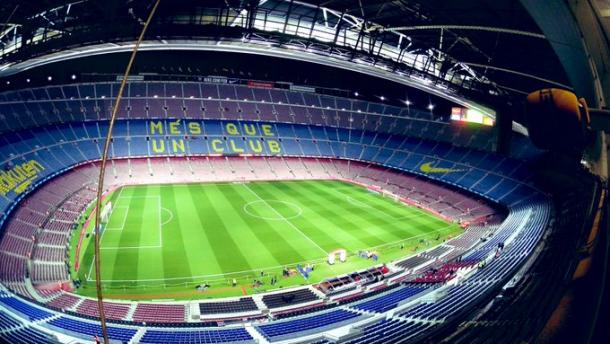 3:07 PMa year ago
Tonight markes the 500th top-flight match for Levante in its 110-year history.
3:06 PMa year ago
At Camp Nou, Levante  have never won, or even drawn, before. This makes a 100% effectiveness for Barça at home against this rival.
3:05 PMa year ago

We're ready to bring you all the action and news that come out of Camp Nou this afternoon!

Do not miss a detail of the match with the live updates and commentaries of VAVEL. Follow along with us all the details, commentaries, analysis and lineups for this FC Barcelona vs Levante UD match.
12:25 AMa year ago

Levante closed their January transfers with the arrival of Bruno González

How to watch FC Barcelona vs Levante Live TV and Stream

If you want to watch the game on TV, your options are: beInSports

If you want to directly stream it: beInSports Connect

Levante sits on the 13th place of the La Liga table with a rather irregular performance during the last few weeks.

They've recently beaten Granada and Celta, but their last three games have ended as defeats against Atlético de Madrid,  Alavés and Osasuna.

Paco López and his men need to regain confindence and there's no better way to do so than with a good result against a team of the size of Barcelona.

Barça and Setién in need of a win

This will be only the third La Liga match for Barcelona under Quique Setién after the sacking of Valverde. He's won against Granada by 1-0, but lost at Valencia 2-0 last weekend.

With Real Madrid's derby victory over Atlético, Barça currently sits second with 43; that is six behind Zidane and his men. A win tonight is crucial if the blaugranas want to stay in the title hunt.

The FC Barcelona vs Levante UD match will be played at the Camp Nou, in Barcelona, Spain. The kick-off is scheduled at 3:00pm ET. 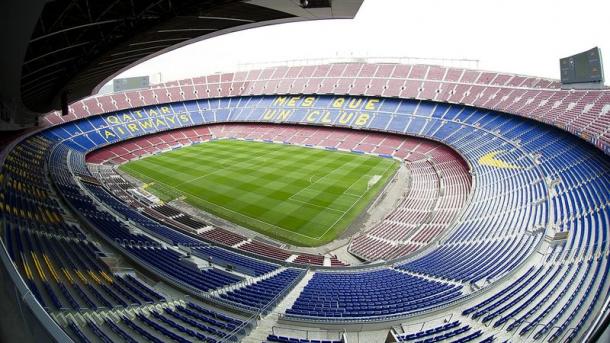 New York Red Bulls vs Nashville SC preview: How to watch, team news, predicted line-ups and ones to watch 2 days ago
//