1:59 PMa year ago
We thank you for joining VAVEL for this match! Until next time!
1:53 PMa year ago

In a game full of scoring chances, both Bayern and Leipzig fail to capitalize. The Bundesliga continues with the Bavarians on top of the table.
1:51 PMa year ago

Pavard is carded for a foul on Timo Werner.
1:48 PMa year ago

Good cross from Kimmich looking for Pavard, but the strike from the Frenchman is too wide.
1:43 PMa year ago

Goretzka leaves his place on the pitch for Coman.
1:40 PMa year ago

Lookman comes in instead of Nkunku.
1:38 PMa year ago

Bayern with great first-touch passes to leave Goretzka one-on-one with the keeper.

Gulacsi makes an amazing stop to a shot that was looking for the bottom corner.

Werner sends an interesting cross that is just a few inches long for Sabitzer.
1:32 PMa year ago

The game lacks clear chances at this point as both teams are very careful to not take too much risks.
1:27 PMa year ago

Boateng is replaced by Lucas Hernández.
1:24 PMa year ago

Davies finds a rebound inside the box and again is Upamecano who slides to make the save!
1:21 PMa year ago

Nkunku leaves Werner one-on-one with the keeper, but the German striker puts too much power behind his shot and ends up sending it wide!

Gnabry is replaced by Coutinho.
1:15 PMa year ago

Yellow card for Kimmich for a late tackle on Timo Werner.
1:13 PMa year ago

Prior to receiving the ball, Lewandowski is offside!

Therefore, the foul on him no longer counts and there won't be a penalty!

Upamecano takes down Lewandowski inside the box and Bayern will have a chance to score!
1:08 PMa year ago

Upamecano is admonished after fouling Thomas Muller from behind.
1:07 PMa year ago

A rebound finds Werner who gets rid of Neuer. The striker shoots but Alaba is there to send the ball to corner kick.

Sabitzer finds the ball right on the penalty spot, but his shot is just over the crossbar!
1:03 PMa year ago

We're underway with the last 45 minutes of this match!
1:03 PMa year ago 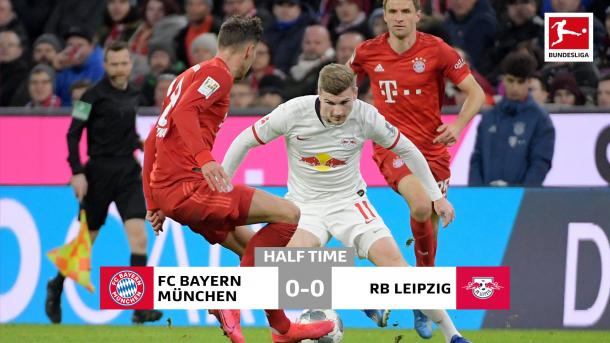 Bayern Munich has dominated the first half, but has been unable to reflect it on the scoreboard!
12:46 PMa year ago

Timo Werner struggling to be dangerous. He comes into contact with the ball near midfield where he is too far to create any danger on Neuer's goal.
12:40 PMa year ago

Lewandowski is found by a cross by Pavard. He tries a finish with his left, but Upemecano saves right on the goal line!
12:38 PMa year ago

Gnabry cuts inside and looks to finish to the far post, but his shot isn't ideal and the ball ends up too wide.
12:37 PMa year ago

Laimer sees a yellow card after a foul from behind.
12:34 PMa year ago

Pavard crosses and finds Thiago Alcantará. The Spaniard attempts shooting to the far post, but the ball is blocked by the defenders.
12:31 PMa year ago

Boateng with a great clearance after Werner had sent an interesting cross looking for Nkunku.
12:26 PMa year ago

Lewandowski find a rebound in the goal area, but his shot is too wide!
12:25 PMa year ago

Werner shoots looking for the near post, but his attempt hits the side netting!
12:24 PMa year ago

Leipzig has siwtched to a back line with three central defenders in order to defend better.
12:18 PMa year ago

Davies again with a great run down the left wing. He now tries to assist Goretzka who is unable to shoot.
12:17 PMa year ago

Leipzig has a very difficult time keeping possession of the ball.

The game has been all Bayern's up to this point.

Great cross from Davies. The ball finds Muller who instead of shooting, tries to pass to Goretzka. The defense once more manages to clear it!
12:11 PMa year ago

Free kick for Bayern. The ball is just about to be pushed in by Lewandovski, but Upamecano does an excellent job to clear it!
12:06 PMa year ago

Thiago Alcantará shoots from outside the box looking for the top corner, but Gulacsi dives to get a hand on it!
12:03 PMa year ago

First chance of the match!

A good cross from the right and fins Goretzka free inside the box. The German player attempts a shot but fails to hit the ball!

The match between FC Bayern Munich and RB Leipzig is now underway!
11:59 AMa year ago
The teams line up and greet each other at midfield for the start of the match!

Sensational atmopshere for the game!

11:56 AMa year ago
The teams are ready to step onto the pitch at Allianz Arena!

Don't miss this crucial match in the Bundesliga title hunt! We're just a few minutes away from kick off!
11:52 AMa year ago
'Lewi' is getting his aim ready ahead of the match! The top-scorer of this Bundesliga season will look to add more goals to his tally! 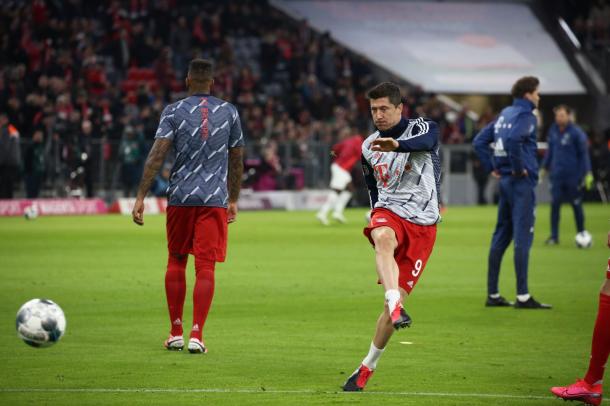 11:45 AMa year ago
The Leipzig players took some time to recognize the pitch prior to the start of their pre-match exercises.

We're just 15 minutes away from kick off! 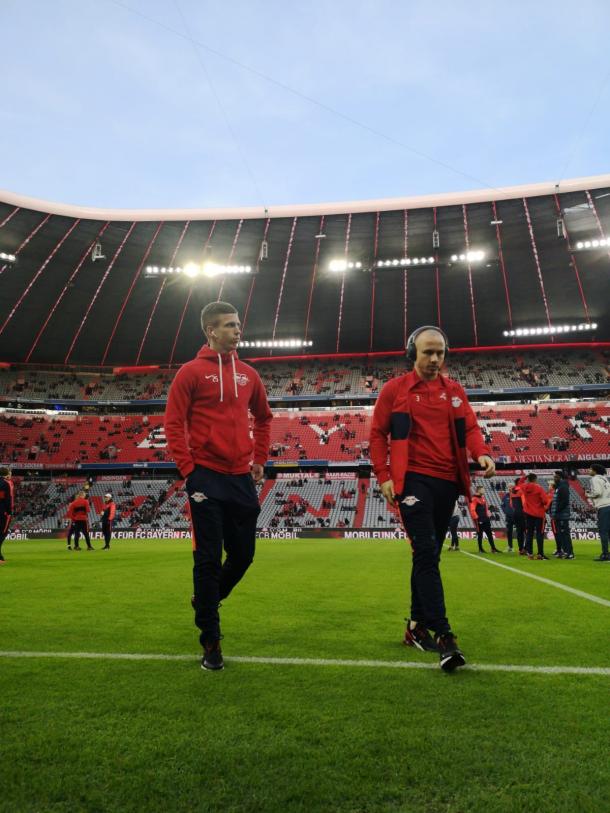 This will be tenth time that FC Bayern and RB Leipzig face each other in competitive matches.

Bayern has five wins and also knocked RB out of the DFB Cup last 16 in October 2017 with a 5-4 win on penalties.

There have been two draws and just one win for Leipzig.

RB Leipzig have won 13 points after being down in the scoreboard on this Bundesliga season.

This is the largest amount of comeback points for any top flight German club.

11:32 AMa year ago
The away team will use their white kits for this match in which they hope to take the top of the table in the 2019-2020 Bundesliga. 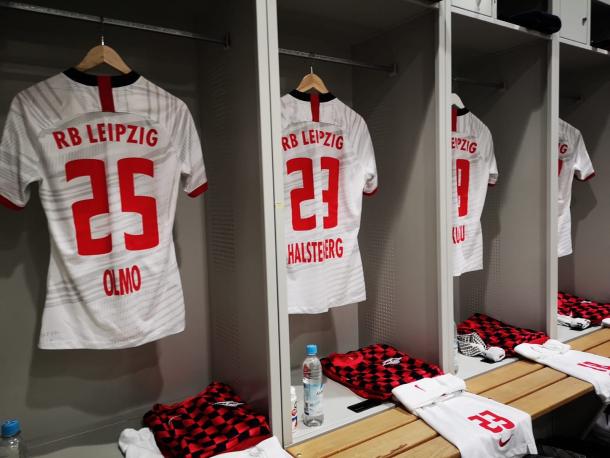 11:31 AMa year ago
Bayern Munich will wear their traditional red uniform for this match against RB Leipzig. 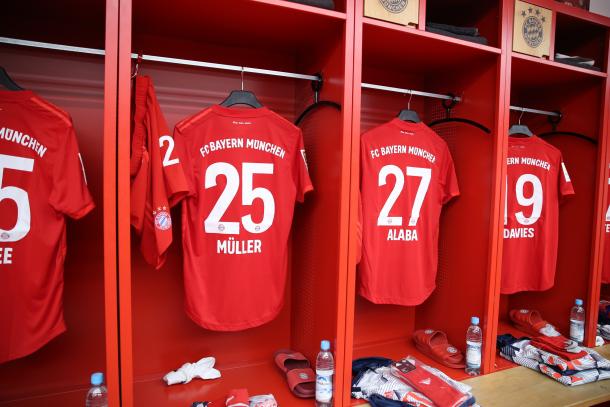 11:26 AMa year ago
The pitch at the Allianz Arena looks in terrific shape for this Bayern Munich vs RB Leipzig match.

Both teams have started their warm ups as we get ready for the start of this huge game. 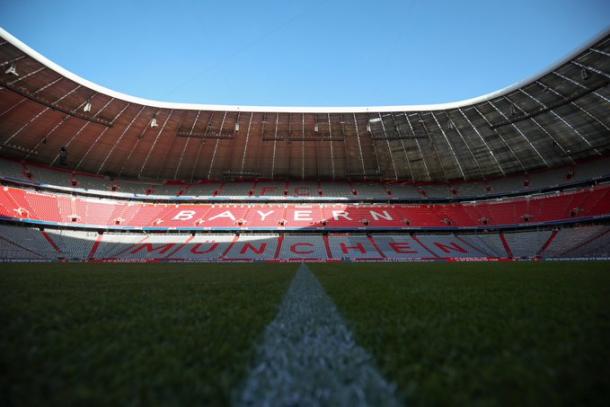 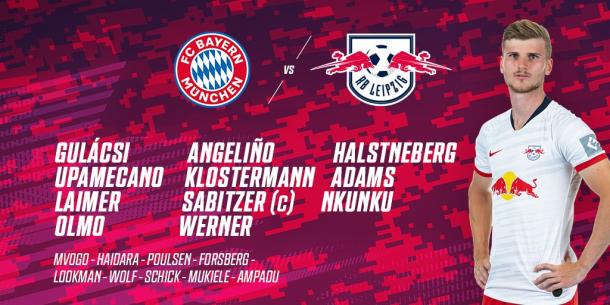 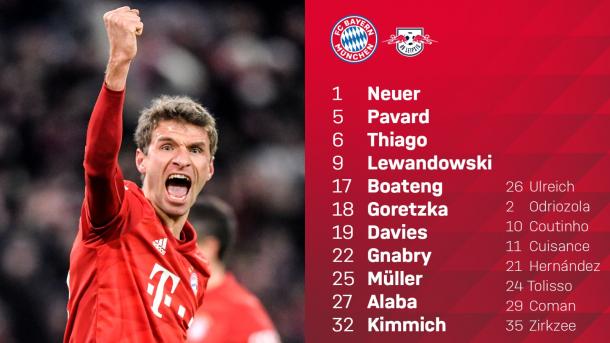 The current champions have scored 58 goals in 20 league matches, making them the best attack in the Bundesliga.

This is also the highest number of goals they have ever had at this stage of the season, breaking the previous record of 56 set in the 1973/74 season.

A dream start to the second half of the season

Hansi Flick and his men have the best start to the second half of a Bundesliga campaign in the club's history with three consecutive wins, 12 goals scored and just one conceded.
11:04 AMa year ago

RB Leipzig have lost in all their visits to Allianz Arena as a top flight team.

Further than that, they've never scored there and have never finished the game without a player being sent off.

We begin your LIVE Coverage of the match between Bayern Munich and RB Leipzig for Matchday 21 of the Bundesliga.

We're an hour away from kick-off! Don't go anywhere!

Do not miss a detail of the match with the live updates and commentaries of VAVEL. Follow along with us all the details, commentaries, analysis and lineups for this Bayern Munich vs RB Leipzig match.
1:57 AMa year ago

If you want to watch the game on TV, your options are Fox Sports 2 and Fox Deportes.

If you want to directly stream it: FoxSports.com

1:51 AMa year ago
Timo Werner is the second best goal-scorer in the current Bundesliga with 20. This places him only two away from his best season performance.

He will attempt to score against Bayern and give his team a chance to win the title. 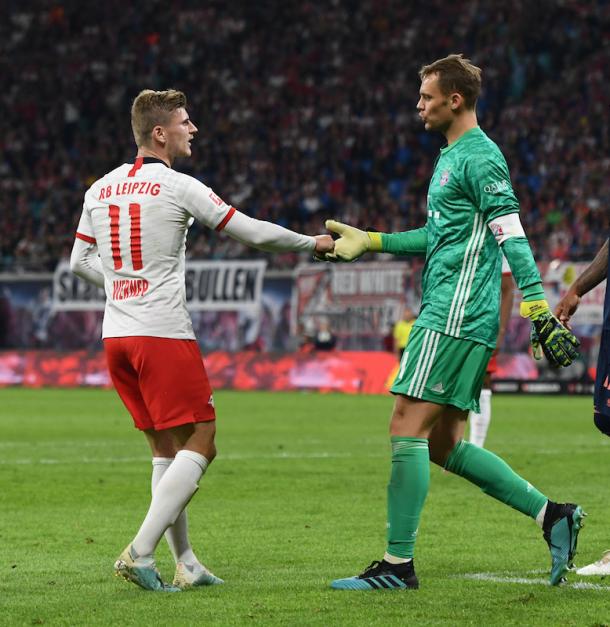 In the history of the league, no other man had made as many goals after 20 Matchdays. 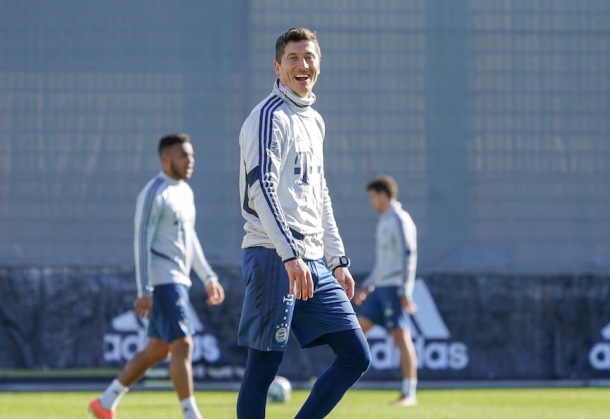 RB Leipzig need a win in the title race

Julian Nagelsmann and his men have recently dropped points which might prove costful at the end of the season.

Out of their last five matches in the Bundesliga, they've won against Union Berlin and Augsburg, tied with Dortmund & Gladbach and lost with Eintracth.

If they hope to win the league, today's match will be crucial.

A crucial match in the title hunt for Bayern

Bayern Munich sits on top of the Bundesliga table with 42 points. They've been in great form in the Bundesliga as their last six games have all ended in wins.

Today they face the second place who are just a point behind, so it'll be a crucial game if they hope to win the title once more.

The Bayern Munich vs  RB Leipzig match will be played at the Allianz Arean, in Munich, Germany. The kick-off is scheduled at 12:00pm ET. 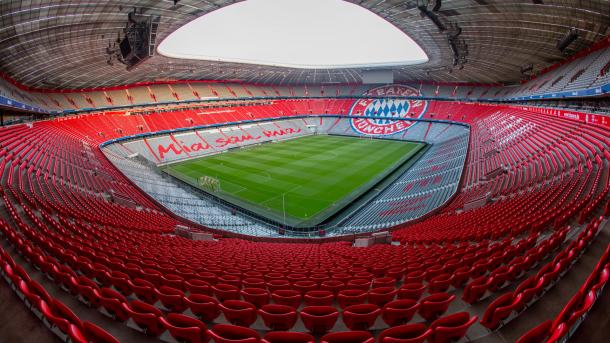