Maple shot hits the outside net, although Quito will have a corner kick
10:17 PMa year ago

Quintero leaves and Zunino enters by league. The game is already defined
10:07 PMa year ago

Sosa leaves and Fernández enters the field
10:03 PMa year ago

Sornoza takes the penalty to make it 3-0

Penalty kick for Quito for a hand in the direct free kick
10:00 PMa year ago

Enter Lux and enter and leave Bologna
9:59 PMa year ago

Bologna gets expelled and leaves River with one less
9:55 PMa year ago

Delayed diagonal Borja throws it over the side
9:50 PMa year ago

Rojas rejects it at the first post when the third goal was about to be scored
9:47 PMa year ago

Caicedo leaves and Alvarez enters instead of Quito
9:47 PMa year ago

Borja gets his ball stolen when he was about to enter the area
9:42 PMa year ago

The Borja fault, he had it inside the area and blew it up
9:41 PMa year ago

Bologna's header is a corner kick. Near Quito
9:36 PMa year ago

Shot by Carrascal saving Gabbarini under the three posts
9:32 PMa year ago

The second half starts
9:23 PMa year ago
If River wants to get a good result, Gallardo will have to move his chips at halftime 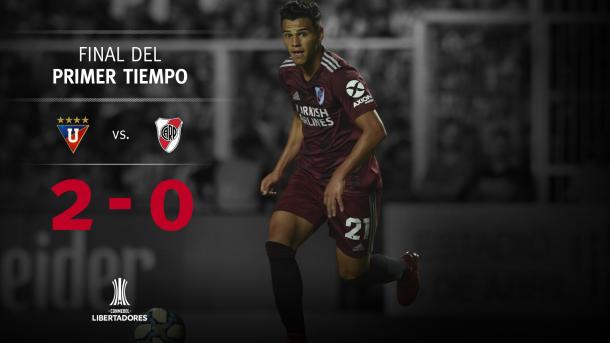 Borja's head coming out of the side
9:12 PMa year ago

Álvarez tries to enter the area but his shot comes out with very little force
9:10 PMa year ago

Far shot from Carrascal, which Gabbarini launches into a corner shot
9:06 PMa year ago

Center within the small area, where Borja stretches his foot to increase the advantage

Once again, Ferreira tries, but Gabbarini cuts under the three posts
9:02 PMa year ago

The match stops now because there is a player from Quito on the pitch, which is Villarruel
9:01 PMa year ago

Trimming and shooting Quinteros that goes above the arc
9:00 PMa year ago

Quito dominates the match, but failed to score the second on the board
8:57 PMa year ago

Borja turns around inside the area, but hits it and goes over the goal
8:53 PMa year ago

Center of Quito passing through the whole area and going for a corner kick
8:51 PMa year ago

Ferreira's shot that hits the crossbar

Perlaza overflows on the right, but the millionaire defense rejects from a corner
8:39 PMa year ago

The premises so far with the most possession of the ball, but without being dangerous
8:37 PMa year ago

War service to second post that does not cause major dangers
8:34 PMa year ago

Long pass from Ferreira and Quito will have a goal kick
8:31 PMa year ago

7:34 PMa year ago
This is how the river captain arrives at LDU Stadium

7:30 PMa year ago
The runner-up makes an appearance in the Copa Libertadores and will do so in Ecuador against LDU Quito. Don't miss out on this match
9:34 PMa year ago

Do not miss a detail of the match with the live updates and commentaries of VAVEL. Follow along with us all the details, commentaries, analysis and lineups for this LDU Quito vs River Plate match.
9:33 PMa year ago

If you want to watch the game on TV, your options is: Bein Sports.

Ignacio Scocco is the man of experience and could be a vital player entering the field or from the bench
9:32 PMa year ago

Cristian Borja is the team's top scorer and has just scored twice in the local tournament
9:32 PMa year ago

River missed the chance to secure the local title and settled for a 1-1 draw against Defensa
9:31 PMa year ago

River Plate: How did you qualify?

The Millonarios were the fourth best team in the Argentine Superliga in 2019 and earned their right to participate in this competition
9:30 PMa year ago

LDU Quito: How did you qualify?

He was sixth in the local tournament and qualified for this Copa Libertadores
9:30 PMa year ago

The LDU Quito vs River Plate match will be played at the stadium LDU, in Quito, Ecuador. The kick-off is scheduled at 7:30 pm ET.
9:30 PMa year ago

Austin FC vs Colorado preview: How to watch, team news, predicted lineups and ones to watch 11 hours ago

Philadelphia Union vs Chicago Fire preview: How to watch, kick-off time, team news, predicted lineups, and ones to watch 4 hours ago
//