Handball by Neuhaus receives a yellow for an intentional handball
3:22 PM9 months ago

The ref adds 4 minutes of stoppage time Gladbach needs to push up
3:21 PM9 months ago

Raphael Guerreiro and Stefan Lainer are shown yellow cards for the scuffle between the players.
3:19 PM9 months ago

Erling Haaland goes on fast break, receives the ball on his left foot takes the shot but it goes high and wide
3:18 PM9 months ago

Ginter receives a yellow after the foul in open play.
3:17 PM9 months ago

Sancho hits the right post with a right-footed shot
3:11 PM9 months ago

Gladbach is having a hard time defending Sancho who is kicked by Bensebaini and gets in his face. Plea comes over and gives Sancho his piece of mind and a scuffle breaks out but the players control themselves.
3:06 PM9 months ago

Hakimi takes a shot and puts it in the bottom left corner assist from Sancho who was only on the field for 5 minutes.
2:57 PM9 months ago

Dortmund make their first change of the game Julian Brandt is off and the young Englishmen Jadon Sancho comes in to try and create more chances for BVB.
2:53 PM9 months ago

Gladbach has had more chances since the 2nd half started with two shots from Ginter and Neuhuas but the Black and Yellows keep it a 1-1
2:47 PM9 months ago

Looks like Favre is getting his first substitution ready and Jadon Sancho looks to be coming in.
2:46 PM9 months ago

Die Fohlen are putting on the pressure after equalizing the game, as they get in the BVB box the players call for a handball in the box but the ref says play on.
2:43 PM9 months ago

Corner for Gladbach, after two passes in the box Stindl puts it in the goal, Haaland tries to stop the ball from going in but he can't get to it and neither can Burki.
2:38 PM9 months ago

Zagadou fouls Kramer and the ref gives the BVB player a yellow.
2:17 PM9 months ago

M'Gladbach gets in the box and the pass doesn't get through as Zagadou shoulder checks the opponent in the box. Play continues this could get checked by VAR.
2:14 PM9 months ago

Axel Witsel is shown a yellow for unsportsmanlike behavior after a foul on the Gladbach player.
2:12 PM9 months ago

Nice play from die Fohlen as Bensebaini crosses to Plea who takes a shot with the outside of his foot but Burki is there to save it.
2:09 PM9 months ago

Gladbach is struggling to get confidence going forward, Plea has a chance but the play doesn't count as the player was offside.
2:07 PM9 months ago

Zakaria cannot continue and forces the swap, Jantschke takes his spot and will play in the backline.
2:05 PM9 months ago

Clash between BVB's Burki and Gladbach's Zakaria, the ref stops the game as both players stay on the ground. Zakaria leaves the pitch to receive medical assistance. He may not be able to continue.
2:02 PM9 months ago

He really hit these Gladbach defenders with the Cruyff turn and finish to put @BlackYellow ahead 😱 pic.twitter.com/X37PYTnkFy — FOX Soccer (@FOXSoccer) March 7, 2020

Gladbach wants a foul but it was the ref that got in the way. Play on says the ref!
1:54 PM9 months ago

Die Fohlen are attacking the left side of Dortmund and are trying to break down the backline.
1:50 PM9 months ago

Chance for Gladbach as they pressure Dortmund's 3back, Bensebaini has a chance after a quick link up with the front three but it goes wide.
1:48 PM9 months ago

After a mistake from Gladbach defender Elvedi, BVB goes on the counter and scores after some fancy footwork from Thorgen Hazard.
1:36 PM9 months ago

Both teams are trying to figure out how the other is setting up their formation.

It's been a midfield battle for both and heavy on the fouls in the starting minutes.

M'Gladbach in the traditional all white uniform.

BVB with their classic all yellow uniform.

For die Fohlen they must focus on defending Dortmund's lethal attack and cannot let them get on the board first.

For BVB they need play their style and show they can win the competition with goals.

Teams are warming up and less than 15 minutes to go! 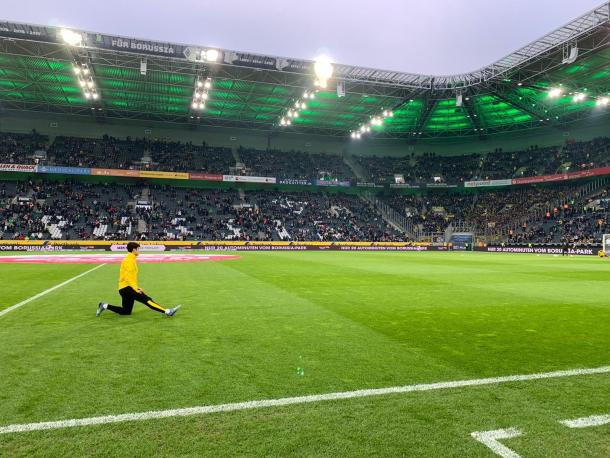 Gladbach have not last at home in the last nine games, last defeat came to Leipzig back in August. They are also on a five game win streak with three wins.

Dortmund have won their last nine games against die Fohlen and is their longest win streak against a Bundesliga team.

Between them in their last 48 games neither has failed to score so expect goals!

Manager Lucien Favre makes a return to Borussia Park, he managed die Fohlen from 2011 to 2015 and restored M'Gladbach. Thorgen Hazard also makes the return having left the club for the black and yellows last year. 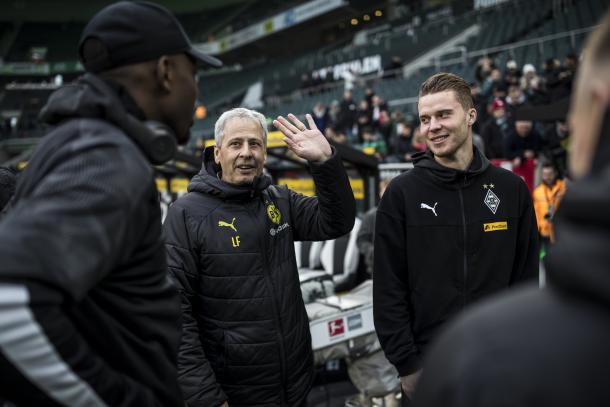 Do not miss a detail of the match with the live updates and commentaries of VAVEL. Follow along with us all the details, commentaries, analysis and lineups for this Borussia M'Gladbach vs Borussia Dortmund match.
5:20 PM9 months ago

If you want to watch the game on TV, your options are: Fox Sports or Fox Deportes.

If you want to directly stream it: Fubo TV and Fox Streaming Services.

If you want to watch over the internet, VAVEL USA is your best option!
5:13 PM9 months ago

Of course we know Marco Reus will not play in this game not due back for another week and Mats Hummels is doubtful due to a head inury. Lastly Thomas Delaney is on day by day basis with his foot injury.
5:10 PM9 months ago

Die Fohlen have 5 team injuries including the young goal scorer Marcus Thuram who is doubtful due to a knee injury. Others in doubt are midfielder Zakaria, Ibrahima Traore and Lazlo Benes.
5:02 PM9 months ago

Die Fohlen traveled to Augsburg and got the result 3-2
4:25 PM9 months ago

BVB have won the last 5 games in all competions against Gladbach, this season they have faced each other twice. In the first game Dortmund pulled away with a 1-0 win at home. The solo goal coming from Marco Reus who will not feature in tomorrow's game. The second game came in the DFB Pokal 2nd round and Dortmund got the comeback win after going down a goal scored by Gladbach's Marcus Thuram.
4:12 PM9 months ago

Race for the Title

Die Fohlen have scored 46 goals in 24 matches this season as two of the highest scoring offenses go toe-to-toe. Gladbach have one game pending against rivals Cologne so they won't be too worried about closing the gap on Dortmund. The Black and Yellows are having an amazing season with 66 goals across 16 different players. Both teams are playing aggressive attacking football and expect a high scoring game.
3:31 PM9 months ago

The M'Gladbach vs Borussia Dortmund match will be played at the BORUSSIA-PARK, in Mönchengladbach, Germany. The kick-off is scheduled at 12:30 PM ET.
3:03 PM9 months ago

Welcome to VAVEL.com’s LIVE coverage of the 2020 Bundesliga match: M'Gladbach vs Dortmund!

My name is Francisco Flores and I’ll be your host for this game. We will provide you with pre-game analysis, roster updates, and news as it happens live here on VAVEL.