Bayern Munich makes a triumphant return to the Bundesliga and continues with a four-point lead at the top of the table.
1:52 PMa year ago

Neuer makes a great stop to a shot by Mees.
1:50 PMa year ago

Perisic comes on instead of Gnabry.
1:46 PMa year ago

Kroos and Ryerson replace Prömel and Bülter.
1:43 PMa year ago

Ingvarsten leaves his place for Mees.
1:41 PMa year ago

In a corner kick, Pavard is able to get a header in and score!
1:40 PMa year ago

Gnabry and Davies with a great series of passes.

The German player dribbles and tries to shoot with his left, but Gikiewicz had walked a few feet forward and was there to block the shot.

The ball is sent to Coman on the right wing. He tries looking for a teammate inside the box, but the ball fails to be contacted and a good chance is wasted.

Müller is found by a good cross from Davies and barely misses the target!
1:32 PMa year ago

Andrich and Ujah leave their place on the pitch for Gentner and Andersson
1:26 PMa year ago

Bayern has taken control of the game and now most of the game is played in Union's half.
1:24 PMa year ago

Neuer has to apply himself to swat away a dangerous cross that came in from the left.
1:17 PMa year ago

Prömel takes a volley that is too wide to worry Neuer.
1:16 PMa year ago

Pavard with a header that goes just wide from the goal.
1:15 PMa year ago

Scholtterbeck is admonished. He's the second man from Union Berlin to see the yellow card.
1:10 PMa year ago

Muller with a great heel kick sets up a shot from Goretzka.

The ball is barely fingertipped by Gikiewicz and ends up a few inches wide from the post!

We're underway with the last 45 minutes of this match.
1:02 PMa year ago

The 0-1 came with Lewandowski's goal

Make that goal number 26 in the Bundesliga this season!

Robert Lewandowski gives Bayern the lead at Union Berlin and it's elbow bumps all round! 🙅‍♂️#beINBundesliga pic.twitter.com/d7SXp7WFQK

In a very well-played game from both sides, Bayern lead at the half with a penalty kick goal from Lewandowski.
12:49 PMa year ago

Pavard takes a powerful shot from a distance, but the ball ends up just wide from the left post.
12:49 PMa year ago

Union Berlin tries to get the equalizer, but the Bayern backline is able to fend off the attacks.
12:45 PMa year ago

Goretzka seemed to be through on goal, but he doesn't make the best of his chance after trying to cut inside.
12:40 PMa year ago

Lewandowski calmly takes the penalty and puts Bayern in front!
12:39 PMa year ago

Goretzka gets to a ball before Subotic. The Union Berlin defender while trying to kick the ball instead hits the forward and the foul is called.
12:36 PMa year ago

Davies sees the yellow card after a late challenge on an opposing player.
12:32 PMa year ago

Both teams have had some chances. Union with long balls and Bayern with longer possessions and inter-play, but no one has been able to break the deadlock.
12:26 PMa year ago

Dangerous cross looking for Subotic, but the defense does well to head it out towards corner kick.
12:23 PMa year ago

Through ball down the left wing for Davies.

He sends the ball into the box and Gikiewicz dives to get a hand to it. On the rebound, Lewandowski is close to scoring but the ball is cleared by the defense!

After two headers inside the penalty area, Müller sends the ball to the back of the net.

The German player seems to be offside and VAR confirms that the goal will not count.

Gnabry shoots from outside the box, but the ball bounces off one of the defenders.
12:12 PMa year ago

Lenz is admonished after a sliding tackle on Pavard.
12:11 PMa year ago

Trimmel looks to assist Ujah, but Davies gets to the ball before the striker could be reached by the pass.
12:10 PMa year ago

Ujah again trying to look for space behind the defenders, but this time he's caught off-side.
12:07 PMa year ago

Ujah is found by a long pass from his defenders and goes for goal with a powerful shot.

The attempt is just wide from Neuer's left post.

Union Berlin has the first chance for them now.

Bülter is found by a low cross and takes the first-touch shot, but Neuer is there to save!

First attempt by Lewandowski. His shot takes a deflection and ends up going just over the crossbar.
12:00 PMa year ago

We're underway with the match between Union Berlin and Bayern Munich.
11:57 AMa year ago
Both teams step out onto the pitch for the start of the match.

Per social distancing measures, there's no Bundesliga protocol ceremony before the match.

11:50 AMa year ago
We're ten minutes away from the start of the match. Don't go anywhere!
11:43 AMa year ago
Lewandowski looks in good shape and totally injury-free as he begins his warm-up exercises.

Bayern will be wearing their alternative kit today as Union Berlin's home shirt is also red. 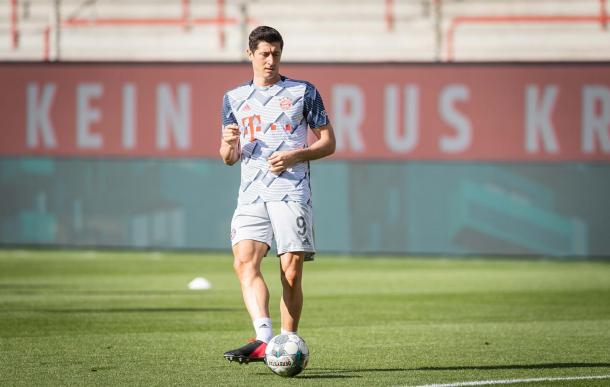 11:35 AMa year ago
No more than 300 people will be allowed inside the stadium for the match. 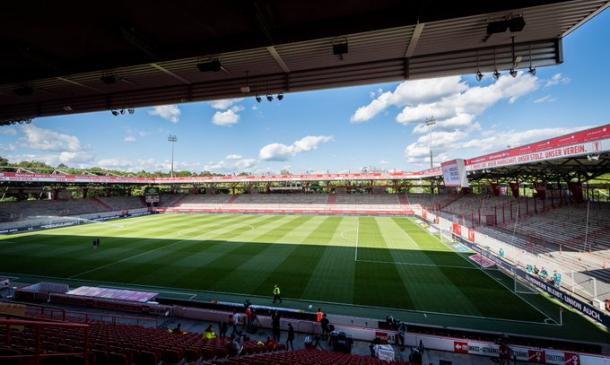 11:30 AMa year ago
The players from Bayern Munich did so too as German authorities have been very strict about these sanitary measures. 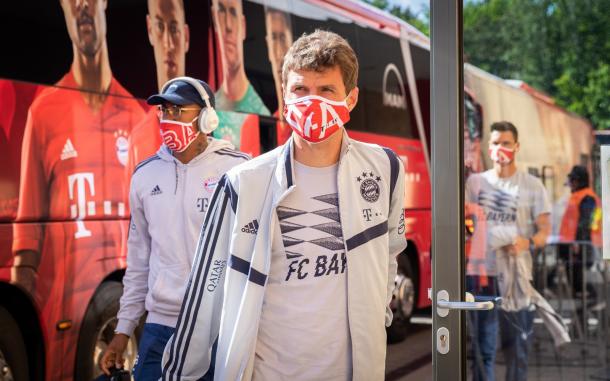 11:25 AMa year ago
The Union Berlin players made their arrival to the stadium following social distancing measures such as the use of masks at all times. 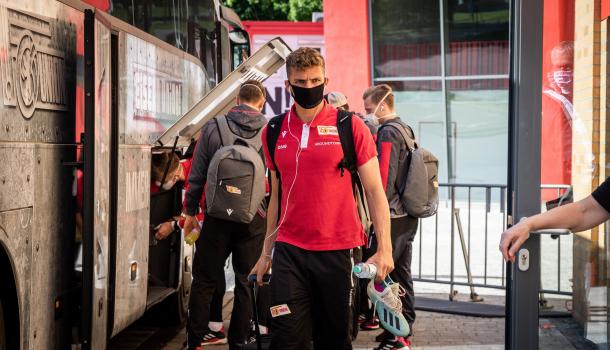 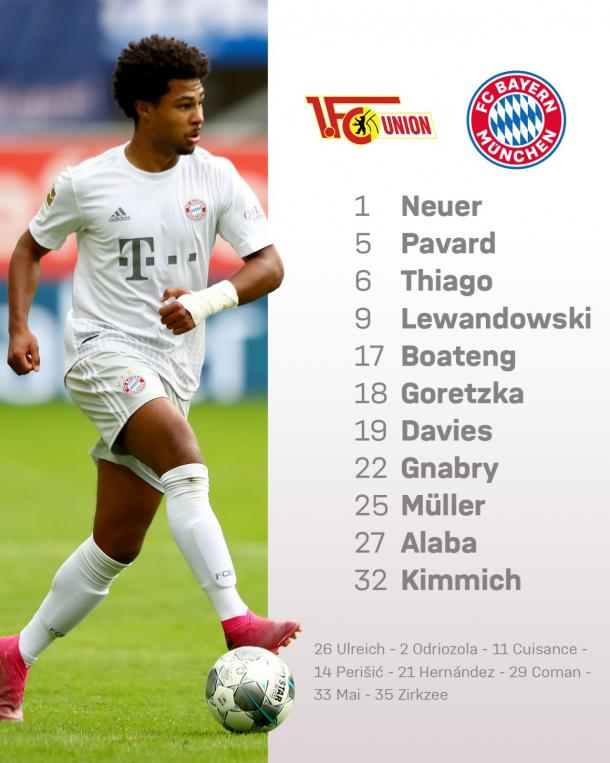 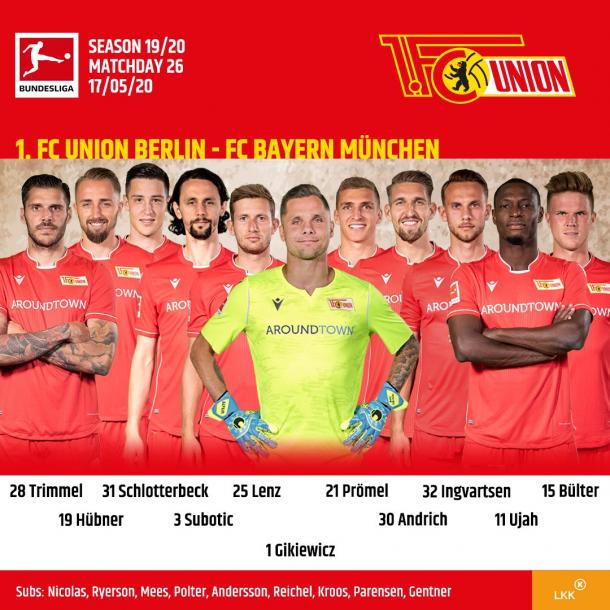 Dortmund closed the gap with Bayern

After Dortmund's victory yesterday, the distance between Bayern and the former has reduced to one point.

If the Bavarians want to stretch it back to 4, then a win today is essential.

11:03 AMa year ago
The pitch at today's venue looks in terrific shape. We can expect a good game from both sides despite the lack of a crowd to cheer them on. 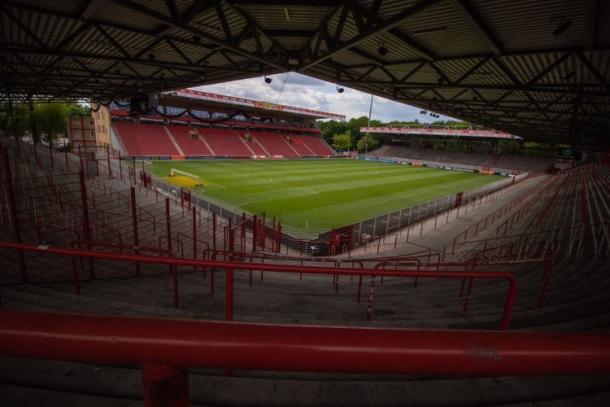 We're an hour from the start of the match at Berlin and ready to bring you all the action from this game.

Do not miss a detail of the match with the live updates and commentaries of VAVEL. Follow along with us all the details, commentaries, analysis and lineups for this Union Berlin vs Bayern Munich match.
3:42 PMa year ago
With authorization from FIFA and the International Board, the Bundesliga teams will be allowed to do up to five substitutions in the remainder of games of this season. 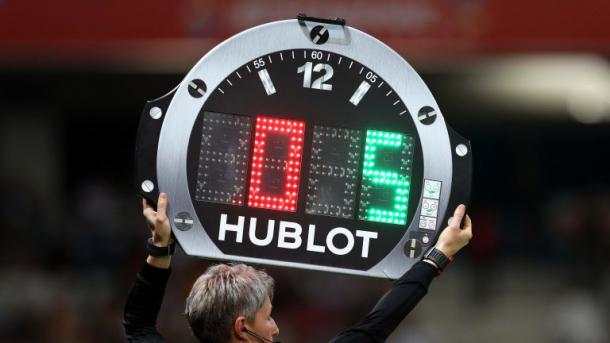 These teams have only played against each other once in official competitions. It was at Allianz Arena back in October when Bayern defeated Union with goals from Benjamin Pavard and Robert Lewandowski.
3:39 PMa year ago

3:30 PMa year ago
The Bavarians arrive at this game as the first place of the Bundesliga table, four points ahead of Dortmund.

With Robert Lewandowski set to return from an injury, they'll have everything they need if they hope to continue with that advantage over Dortmund and RB Leipzig. 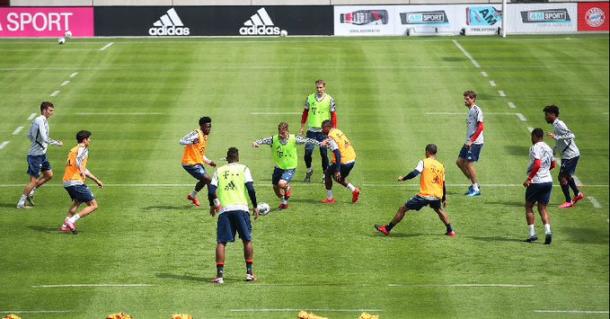 3:14 PMa year ago
Union Berlin have exceeded all expectations so far and, instead of fighting to avoid relegation, they sit 11th in the Bundesliga table with nine games to go.

The players have resumed training with hopes of defeating Bayern.

In compliance with sanitary measures taken by the German government, the match will be played behind closed doors to avoid the possible spread of the coronavirus.

Players on the bench will have to be at least 6 feet away from each other and will wear masks.

There will be a total of 300 people allowed into the stadium and all types of physical contact outside the pitch must be avoided.

The Union Berlin vs Bayern Munich match will be played at the Stadion An der Alten Försterei  in Berlin, Germany. The kick-off is scheduled at 12:00 pm ET. 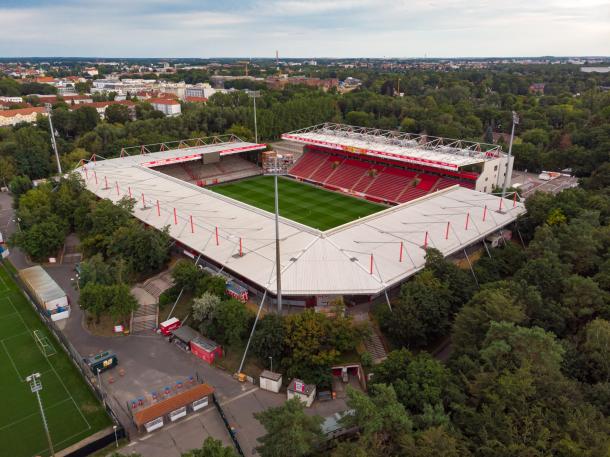 Seattle vs FC Dallas preview: How to watch, team news, predicted lineups and ones to watch an hour ago

New York Red Bulls vs FC Cincinnati preview: How to watch, team news, predicted lineups and ones to watch 6 hours ago

Chicago Fire vs NYCFC preview: How to watch, kick-off time, team news, predicted lineups, and ones to watch a day ago
//