2:23 PMa year ago
We thank you for joining VAVEL for this match. Until next time!
2:22 PMa year ago

A very dominating Bayern Munich wins an important match just ahead of the Der Klassiker that will most likely decide the championship.
2:17 PMa year ago

Cuisance goes for goal, but his attempt is just a little wide.
2:16 PMa year ago

Zirkzee and Cuisance will replace Comand and Kimmich.
2:15 PMa year ago

Dost lays the ball off for Toure who shoots to the near post, but Neuer is there to make the save.
2:14 PMa year ago

Kostic makes room for himself and takes a powerful shot with his left. The ball hits the post and bounces out!
2:13 PMa year ago

Last ten minutes of the match. Will we see more goals?
2:08 PMa year ago

Ilsanker clears the ball out before Lewandowski could tap it in!
2:07 PMa year ago

Davies with the fourth goal for Bayern

Never give up on the play, kids.

Dost and Durm come on to replace Silva and Da Costa.
2:06 PMa year ago

When he tried to get the ball out, it gets tangled in between his feet and ends up in the back of his own net.

Boateng leaves his place on the pitch for Lucas Hernández.
2:01 PMa year ago

Kamada and Sow replace Sode and Gacinovic in the visiting team.
1:59 PMa year ago

André Silva in the box with a heel pass for Gacinovic who tries to finish it to the near post, but Neuer makes a tremendous save!
1:56 PMa year ago

Gnabry leaves Coman one-on-one with the keeper, but Trapp does well to stop it!
1:54 PMa year ago

Perisic is replaced by Serge Gnabry.
1:52 PMa year ago

Davies takes advantage of a mistake from the Eintracht defense to make it 4-2 for Bayern.
1:51 PMa year ago

Hinteregger again finds the back of the net!

This time he finds a cross from the corner and heads it to the far post to score!

This was Lewi's 27th goal of the season.

Perisic now with a header that is just wide!
1:37 PMa year ago

Coman crosses for Lewandowski who finishes it with a nice diving header.
1:36 PMa year ago

Timothy Chandler comes on instead of Ndicka.
1:36 PMa year ago

We're underway with the last 45 minutes of the match.
1:34 PMa year ago

Müller made it 2-0 with this sensational finish!

After 45 minutes, Bayern wins by two with a dominant performance so far.
1:18 PMa year ago

Two minutes of added time for this first half.
1:13 PMa year ago

The German player makes a great control and finishes it with his left, leaving Trapp without a chance.

Yet another chance for Bayern. This time Lewandowski with a header that ends up going just wide from the goal.
1:09 PMa year ago

Alaba shoots from long distance, but Trapp is there to send it to a corner kick.
1:07 PMa year ago

Hinteregger is cautioned after fouling Lewandowski.
1:06 PMa year ago

Shot from Kostic that fails to find the target.
1:05 PMa year ago

After a strong half-hour from Bayern, the pace of the match has slowed downa bit.

.@FCBayernUS are up and running! 💪

Kimmich shoots but fails to find the target.
12:53 PMa year ago

Perisic shoots straight at Trapp's position and a good chance is wasted.
12:51 PMa year ago

Long cross for Perisic who then tries to pass to Lewandowski.

Trapp again has to interfere as his defense is really struggling to keep Bayern away from the box.

Müller makes a run down the left flank and crosses back to find Goretzka.

He finishes it with the inner part of his right foot to put Bayern in front.

Bayern continues to put pressure on the Eagles. Trapp has to intervene once more to stop the Bavarians to open up the scoreboard.
12:46 PMa year ago

Kimmich crosses to find a free Pavard a mere 5 yards from the goal.

The header is straight at Trapp's position and a huge chance is wasted.

Lewandowski hits the bar with a powerful shot!
12:43 PMa year ago

Davies with an interesting run down the left wing. He tries to find Müller, but Rode gets to the ball and sends it to corner kick.
12:39 PMa year ago

Dangerous cross looking for Lewandowski, but the ball is just a little too high for the striker to reach it.
12:38 PMa year ago

Coman receives a long ball from Lewandowski and makes a run towards the goal.

He's taken down by Ndika, but the officiating team sees no foul on the play.

We're underway with the match between Bayern Munich and Eintracht Frankfurt!
12:30 PMa year ago
Both teams step onto the pitch for the start of the match.

A minute of silence will be kept to honor the victims of COVID-19.

12:26 PMa year ago
With Borussia Dortmund's 0-2 win at Wolfsburg, Bayern are obligated to win if they desire to keep the four-point lead at the top.

A defeat today, would cut the distance to 1 point and the match between them next Tuesday could likely decide the title. 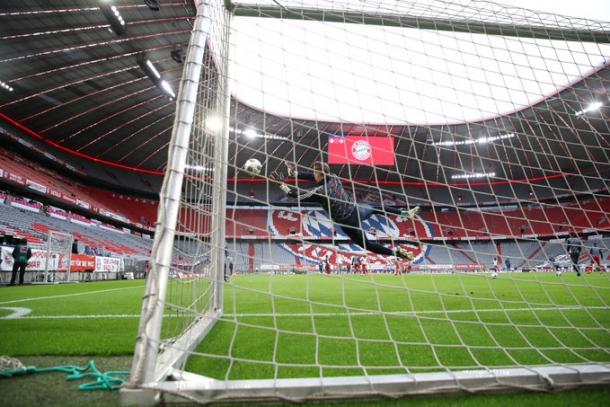 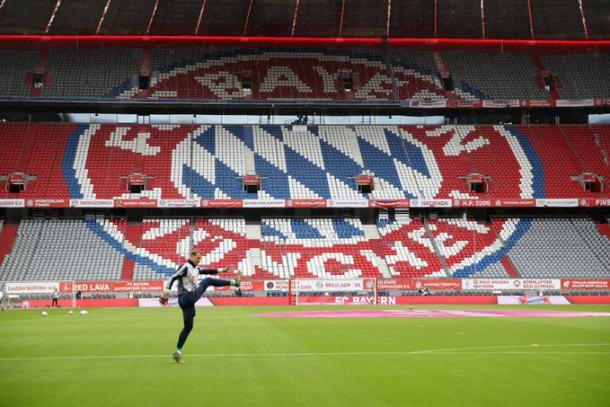 12:04 PMa year ago
The Frankfurt Eagles have the worst away record in the Bundesliga, having won seven points from a possible 36.

They have also lost their last 10 away games in Munich.

11:54 AMa year ago
Eintracht are one of only four teams to have beaten Bayern this season. Can they repeat this feat?
11:51 AMa year ago
The Bavarians are the only unbeaten Bundesliga team in 2020, collecting 34 from a possible 36 points.

Their only draw came on February 9th when they hosted Red Bull Leipzig in a goalless match. 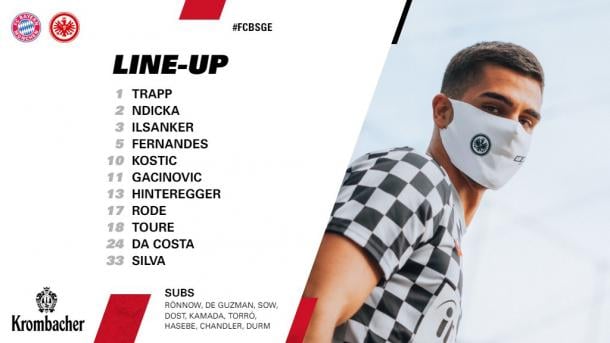 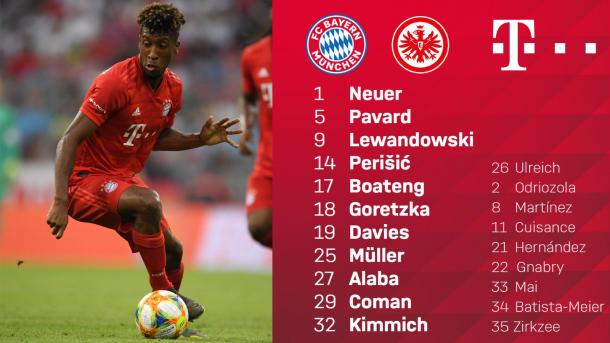 11:41 AMa year ago
The Eintracht Frankfurt bus as it made its way to the venue for tonight's match. 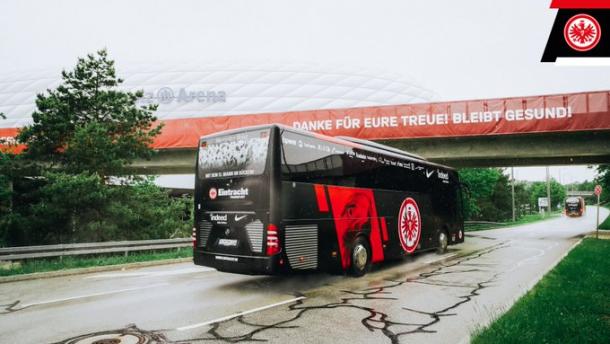 Back to Allianz Arena

Robert Lewandowski and the rest of the Bayern Munich squad make their return to their home ground after two months. 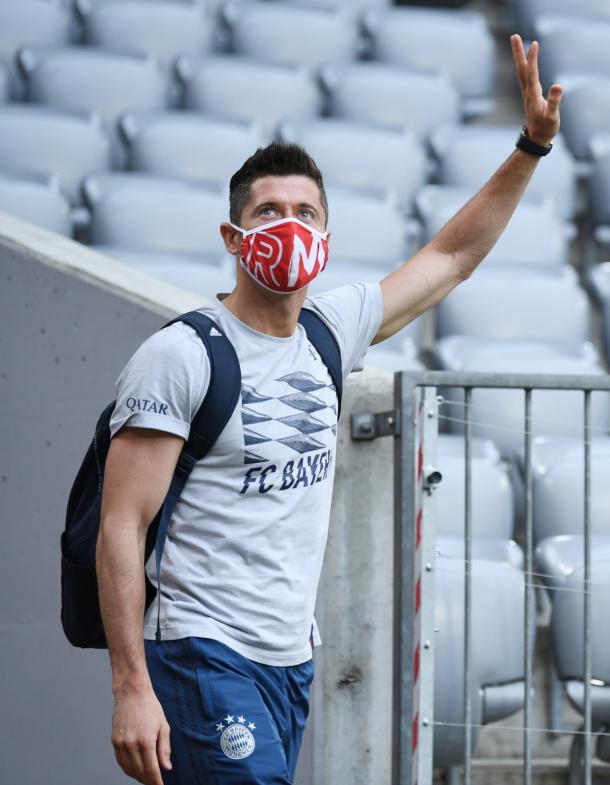 We're ready to bring you the action of this Bayern Munich vs Eintracht Frankfurt match.

Kick-off is just an hour away from the start of the match.

Do not miss a detail of the match with the live updates and commentaries of VAVEL. Follow along with us all the details, commentaries, analysis and lineups for this Bayern Munich vs Eintracht Frankfurt match.
7:12 PMa year ago

Coutinho with an uncertain future

Philippe Coutinho will not continue with Bayern Munich after the club has opted to not pay the transfer fee to keep him permanently.

"The purchase option has expired and we have not exercised it, now we will have to complete the planning of the squad for next season", said Karl-Heinz Rummenigge, legendary footballer  and current CEO of Bayern.

The Brazilian player will have to return to Barcelona when the loan expires and will most likely be negotiated. 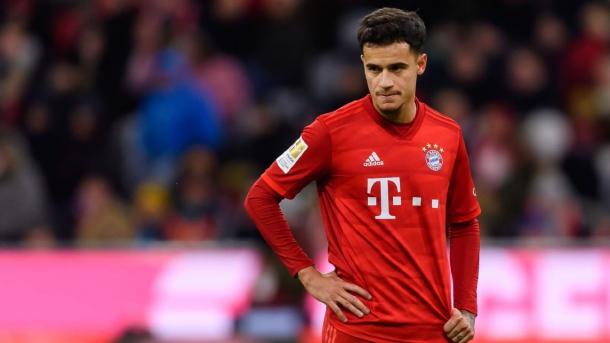 Bayern Munich informed during the week that they had reached an agreement for the renewal of keeper Manuel Neuer.

The 2014 World Champion will continue with the club until at least 2023. 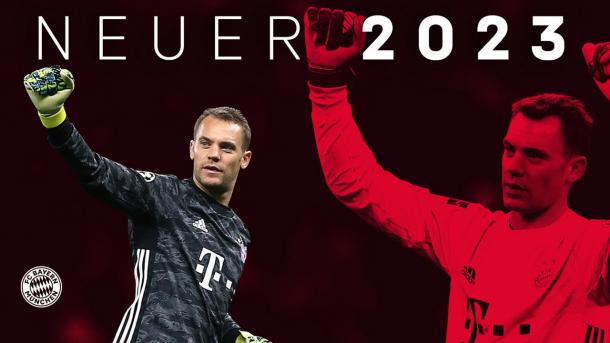 Can they make a comeback against Bayern?

Eintracht Frankfurt was not so lucky in their return to action as they faced a powerful Gladbach side that beat them at home with ease.

The game became an uphill battle for them at just 37 seconds when Pléa scored the first goal of the match. They couldn't recover and the match ended in a painful defeat. 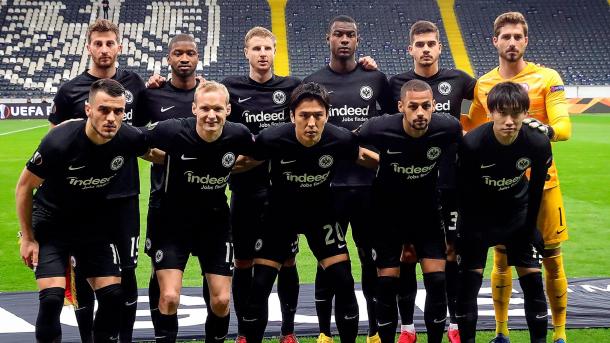 The Bavarians made a successful return to the Bundesliga last week with a convincing 0-2 victory at Union Berlin's ground.

With that victory, they remain top of the league with a four-point advantage over Dortmund and eight games to go. 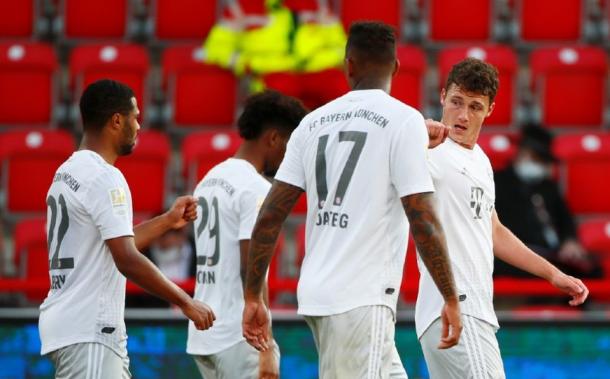 The Bayern Munich vs Eintracht Frankfurt match will be played at the Allianz Arena, in Munich, Germany. The kick-off is scheduled at 12:30 pm ET/ 9:30 am ET. 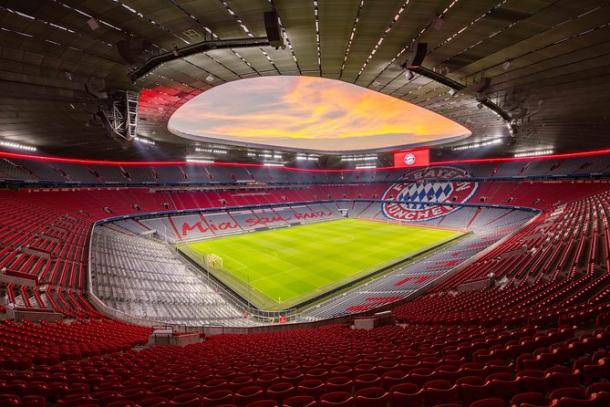 Austin FC vs Colorado preview: How to watch, team news, predicted lineups and ones to watch 8 hours ago

Philadelphia Union vs Chicago Fire preview: How to watch, kick-off time, team news, predicted lineups, and ones to watch an hour ago
//