1:20 PM8 months ago
We thank you for joining VAVEL for this match.

In a very one-sided affair, Bayern Munich beats Fortuna Dusseldorf and gets closer to its eighth consecutive Bundesliga title.
1:18 PM8 months ago

Suttner is cautioned after disapproving a decision by the ref.
1:16 PM8 months ago

Goretzka receives the ball inside the box and goes for goal, but his shot is deflected for a corner kick.
1:06 PM8 months ago

Davies with the 5-0 for Bayern

Zirkzee comes on instead of Kimmich.
1:02 PM8 months ago

Double chance for Bayern that is saved by Kastenmeir.
12:55 PM8 months ago

Zimmerman and Thommy replaced by Zimmer and Suttner.
12:53 PM8 months ago

Neuer makes an amazing save to a long-range shot from Karaman.
12:51 PM8 months ago

Müller has a chance to score with a volley, but his attempt is wide!
12:50 PM8 months ago

Odriozola and Perisic come on instead of Pavard and Coman.
12:48 PM8 months ago

Zimmermann sends a perfect cross for Hoffman, but he fails to head it in!
12:47 PM8 months ago

Lewandowski with his 29th goal of the season

Berisha and Sobottka replace Stoger and Morales.
12:44 PM8 months ago

Pavard finds a rebound and shoots. Kastenmeir again has to dive to make the save!
12:42 PM8 months ago

Lewandowski heads it over the bar.
12:41 PM8 months ago

Alphonso Davies drills through the defense and finishes it before Kastenmeir.
12:38 PM8 months ago

Lewandowski does it again!

Gnabry finds him free inside the box and he finishes it with the heel!

Alaba goes into an attacking position now and finds himself inside the box. He shoots, but Kastenmeir makes the diving save.
12:33 PM8 months ago

We're underway with the last 45 minutes of the match.
12:24 PM8 months ago
With this goal against Fortuna Düsseldorf, Lewandowski has now netted the ball against all Bundesliga teams.
12:19 PM8 months ago

At the break, the Bavarians have overwhelmed Dusseldorf and are winning with a comfortable 3-0.
12:14 PM8 months ago

Lewandowski gets his 28th!

Kimmich got in front of the keeper but instead of finishing, he heels it back to Müller.

Müller also decides not to shoot and passes it back to Lewi who taps it in.

Gnabry cuts inside and tries his luck with a shot.

The ball is too high to worry Kastenmeir.

Fortuna again with a quick break.

Karaman with a dangerous cross directed at Thommy, but Lucas Hernández just gets there to clear it out!

This was the 1-0 for Bayern

Karaman goes for goal, but Alphonso Davies gets in the way and saves Bayern!
12:00 PM8 months ago

Karaman is cautioned after a foul on Lucas Hernández.
11:54 AM8 months ago

Dangerous cross looking for Lewandowski, but the cross is just a bit too high for him.
11:53 AM8 months ago

Bayern continue to be in control of the match, but no clear chances have been created after the goal.

Fortuna have a very difficult time getting past midfield.

Gnabry gets a ball at the far post and crosses it back with his first-time touch!

Pavard shoots, but his attempt hits on Zanka and ends up inside the goal!

Pavard shoots from long range, but the ball is very wide.
11:40 AM8 months ago

Bayern puts the pressure on Fortuna by moving the ball around with a high pace.
11:36 AM8 months ago

Long ball for Lewandowski who is unable to make a good ball control and ends up bumping into the keeper.
11:33 AM8 months ago

Morales goes for goal, but his attempt is straight at Neuer's hands.
11:32 AM8 months ago

First important chance of the game.

Gnabry opens up the ball for Davies. The Canadian fullback tries looking for Lewandowski, but the ball is a bit too long.

We're underway with the match between Bayern Munich and Fortuna Düsseldorf!
11:30 AM8 months ago

Both teams step onto the pitch and we're ready for the start of the match!

A minute of silence is kept for the victims of coronavirus.

11:23 AM8 months ago
Fortuna have a good chance of overtaking Mainz on the 15th place on the table and to get out of the relegation zone.
11:19 AM8 months ago
Bayern will hope to win to momentarily extend their lead to 10 points over Borussia Dortmund.

The Black-Yellows will have their match tomorrow against Paderborn.

11:07 AM8 months ago
Thomas Müller has done very well in his last five Bundesliga games against Fortuna.

He was able to get 5 goals and 5 assists when facing them!

Düsseldorf have failed to score in 22 of their 49 Bundesliga meetings with Bayern Munich.
11:00 AM8 months ago

Everything set at an empty Allianz Arena 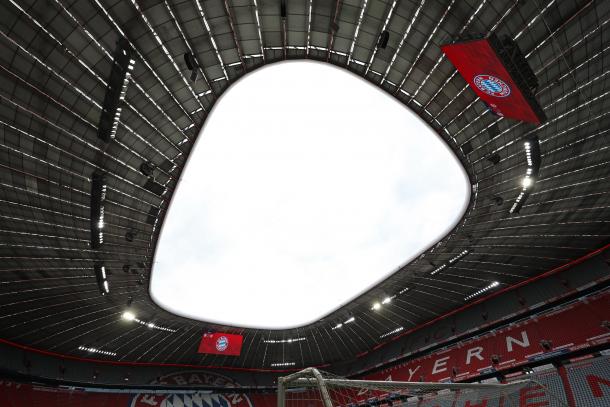 10:51 AM8 months ago
Fortuna won't have American keeper Zach Steffen who is out with a knee injury.
10:50 AM8 months ago
Bayern won't be able to count on the following players due to injury:
10:42 AM8 months ago 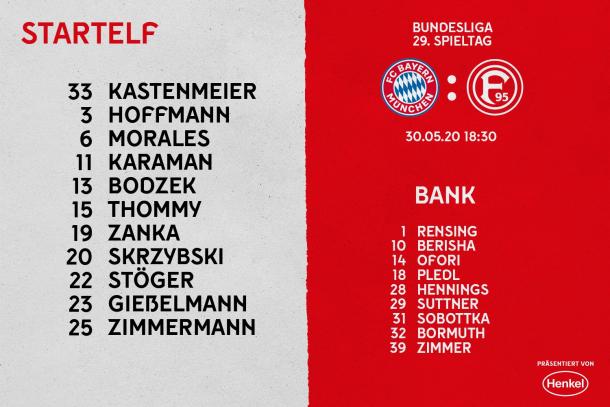 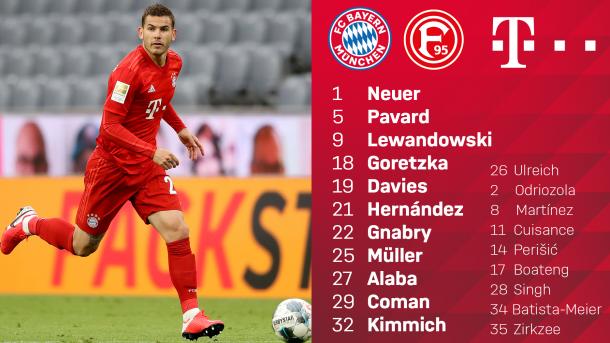 10:35 AM8 months ago
The visiting team has also arrived at today's venue. They also wear facemasks to avoid the spread of COVID-19. 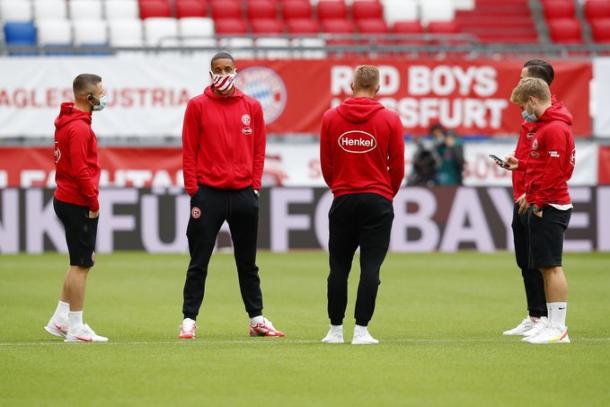 10:34 AM8 months ago
Robert Lewandowski and the rest of the Bayern Munich squad have arrived at Allianz Arena under the necessary sanitary precautions. 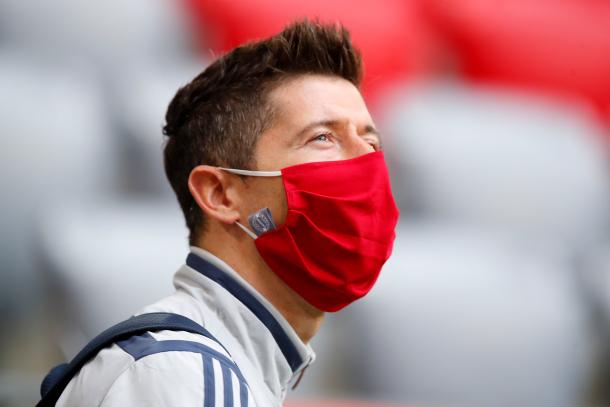 We're an hour away from the start of the match between Bayern Munich and Fortuna Düsseldorf!

Do not miss a detail of the match with the live updates and commentaries of VAVEL. Follow along with us all the details, commentaries, analysis and lineups for this Bayern Munich vs Fortuna Düsseldorf match.
6:12 PM8 months ago

Bayern are unbeaten in 11 Bundesliga matches against Fortuna. The Bavarians have scored at least three goals in their last six meetings with the Rhineland club.

Düsseldorf has conceded 117 goals and suffered 29 defeats in their match history against Bayern. 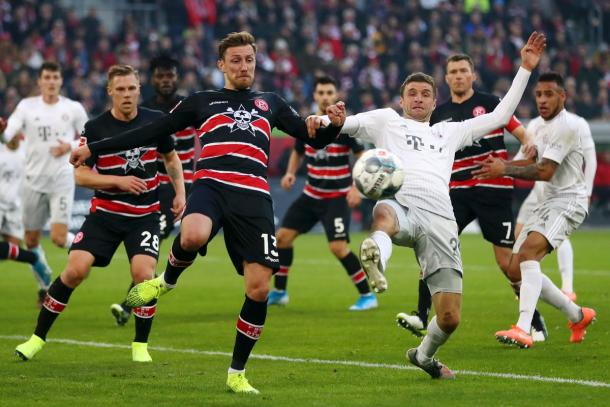 If you want to directly stream it: Fox Soccer Pass.

6:01 PM8 months ago
Fortuna Düsseldorf picked up a huge win last Wednesday against Schalke 04 at home.

They hope to continue gaining points so they can get away from the relegation zone. They currently sit on the 16th position with 27 points and a win could take them all the way to the 14th site. 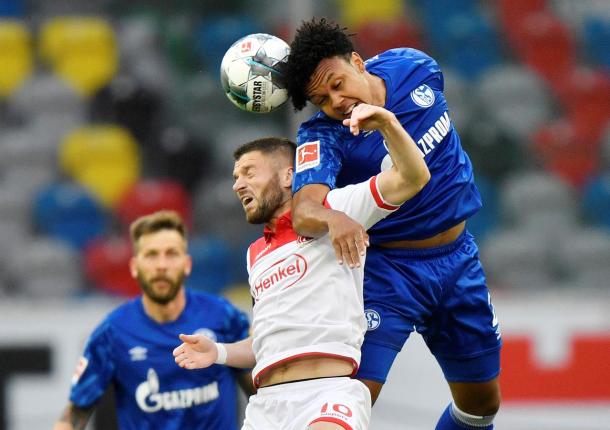 Bayern on a roll!

Bayern Munich achieved a huge victory in their last Bundesliga fixture when they beat Borussia Dortmund at Signal Iduna Park by a 0-1 margin.

That win places them 7 points clear on top of the table and has them mere weeks away from their eighth consecutive Bundesliga title. 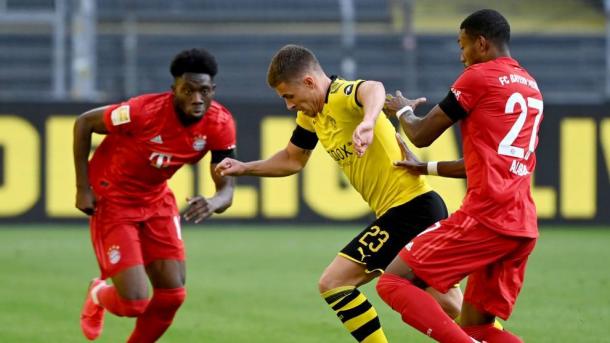 The Bayern Munich vs Fortuna Dusseldorf match will be played at the Allianz Arena, in Munich, Germany. The kick-off is scheduled at 12:30 pm ET/ 9:30 am PT. 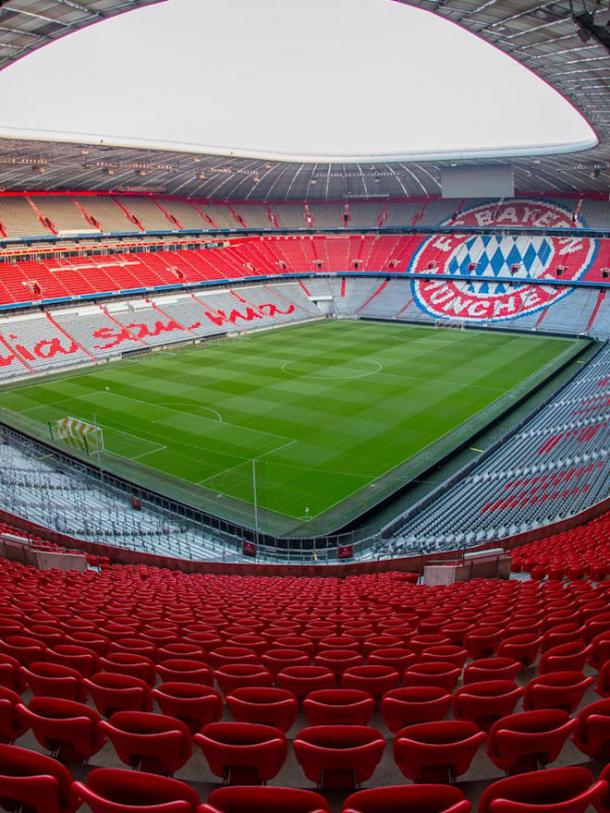