Barcelona can't beat a very intense Sevilla side and drop two important points in the title race. If Real Madrid wins on Sunday at San Sebastian, they will be new leaders.
5:58 PMa year ago

Barcelona with their last attempts of the match, but they get caught offside.
5:57 PMa year ago

Reguilón wastes a huge one!

He finds the ball near the penalty spot, but he rushes and his shot is weak and straight at Ter Stegen's hands!

Lenglet is being checked by the medical staff after a collision with a rival.
5:53 PMa year ago

Suárez hits the ball on the first touch, but his attempt is just inches above the crossbar.
5:52 PMa year ago

Riqui Puig replaces Rakitic for the last few minutes of the match.
5:48 PMa year ago

Ocampos is replaced by Franco Vázquez.
5:46 PMa year ago

It's the final stretch of game with Barcelona with a more attacking posture. Will we see a goal?
5:42 PMa year ago

The game resumes after the hydration break.
5:42 PMa year ago

Vidal comes off, while Griezmann is on.
5:40 PMa year ago

The game stops for another cooling break.
5:40 PMa year ago

Sevilla builds a terrific counter-attack, but Reguilón is unable to get the last pass past Alba and a huge chance is wasted by the home team!
5:37 PMa year ago

Messi takes a free-kick looking for the top-right corner, but Vaclik gets fingertips to it and sends it to a corner kick.
5:34 PMa year ago

De Jong and Jordán are replaced by Gudelj and En-Nesyri.
5:30 PMa year ago

Banega finding space for his teammates behind the Barcelona full-backs.

He takes advantage of his great touch to place balls for other Sevilla players making runs.

Braithwaite leaves his places on the pitch for Arthur Melo.
5:27 PMa year ago

Banega is cautioned after a late sliding tackle on Busquets.
5:26 PMa year ago

Ocampos goes for goal, but his attempt is well over the crossbar.
5:24 PMa year ago

Munir now with a run down the left flank. He had no one to cross it to, so he decides to shoot forcing yet another save from Ter Stegen.
5:20 PMa year ago

Ter Stegen makes a terrific save to a powerful shot from Jesús Navas.
5:18 PMa year ago

Ocampos tries to dribble inside the box, but Lenglet does well to dispossess him.
5:13 PMa year ago

Sevilla starts the second half putting pressure on Barcelona with some interesting cross from both sides.

Banega using his quality to leave players on the wing in a good position to cross.

Banega comes in for the second half replacing Torres.
5:08 PMa year ago

We're underway with the last 45 minutes of the match between Sevilla and Barcelona.
4:53 PMa year ago

We go to the break with the score still equalized at zero.

Sevilla has made a great job at containing Barcelona during the first 45 minutes of play.

A bit of a dispute between players from both sides after Messi confronted Diego Carlos.
4:49 PMa year ago

The game has lacked offensive play in the last few minutes. No team is able to get behind the opposing deffensive lines.

Lot's of marking going on at the moment!
4:45 PMa year ago

Piqué carded after a foul on Munir.
4:41 PMa year ago

Sevilla have gotten a good amount of possession in the last five minutes of the match. They now try to get some pressure on the Barcelona defense.
4:36 PMa year ago

The game resumes after the cooling pause.
4:33 PMa year ago

The game is stopped for a cooling and hydration break.
4:33 PMa year ago

De Jong tried starting a counter-attack, however, he had very little support from his teammates and the ball ends up getting easily to Ter Stegen.
4:30 PMa year ago

Reguilón is shown a yellow card after a foul on Messi.
4:28 PMa year ago

Low cross comes in from the left and Vaclick fumbles it.

After some rebounds, the ball falls to Rakitic who shoots just wide of the post.

Another chance on the free-kick for Messi, but this time it's Vaclik who makes the save.
4:24 PMa year ago

Messi takes a picture-perfect free-kick, but Kounde gets his head on it right at the goal line to save Sevilla.
4:18 PMa year ago

From a free-kick, Messi whips a cross in looking for Piqué, but Munir did great to get to the ball first and clear it out.
4:14 PMa year ago

Kounde finds a rebound at the edge of the box and goes for goal.

The ball is just inches away from Ter Stegen's far post!

The game has started with lots of intensity from both sides, but still little clarity.

As expected, Barcelona has control of the ball trying to open up spaces in Sevilla's defense.

Suárez with his first attempt on goal, but it's straight at Vaclik.
4:03 PMa year ago

The match between Sevilla and Barcelona is underway!
3:58 PMa year ago
Both teams step onto the pitch and we're ready for the start of the match.
3:54 PMa year ago

Ter Stegen will try to keep a clean sheet tonight

3:50 PMa year ago
Sevilla are Lionel Messi’s favorite opponents. In the 38 matches that he has played against them, he’s found the net on 37 occasions.
3:44 PMa year ago

It seems they have their number...

Messi has scored 699 career goals for FC Barcelona and Argentina.

Will today's match see him reach this historic number?

The Barcelona warm up has started!

3:26 PMa year ago
Sevilla's Twitter account shared some more images of their arrival to their home ground to face Barcelona.

A win today would momentarily place them 5 points ahead of Atlético de Madrid and in a good position to be the third Spanish entrant into the 2020-2021 UEFA Champions League group stage. 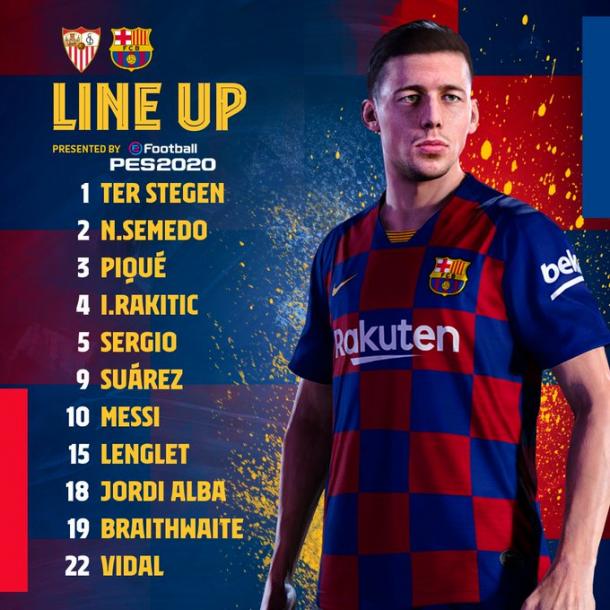 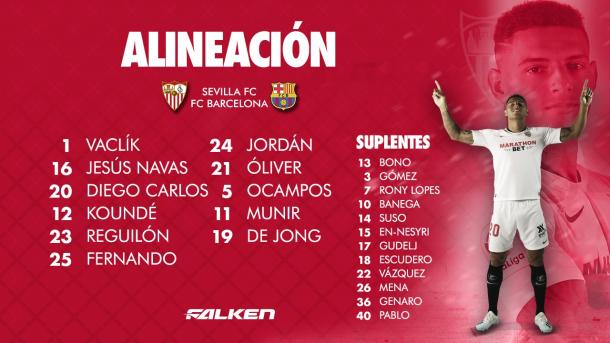 3:09 PMa year ago
The current leaders in the Spanish league, FC Barcelona, made their arrival to Sevilla under strict sanitary protocols including the use of latex gloves and facemasks at alll times. 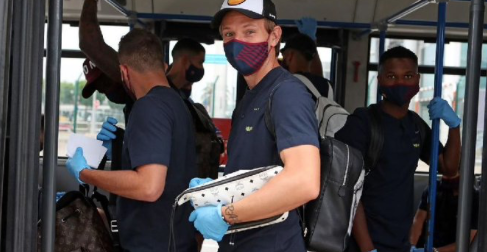 3:08 PMa year ago
The home side has made the arrival to the stadium ready for an exciting match between two teams in the upper table.

Will Sevilla make their home-field advantage count despite no crowd in the stands? 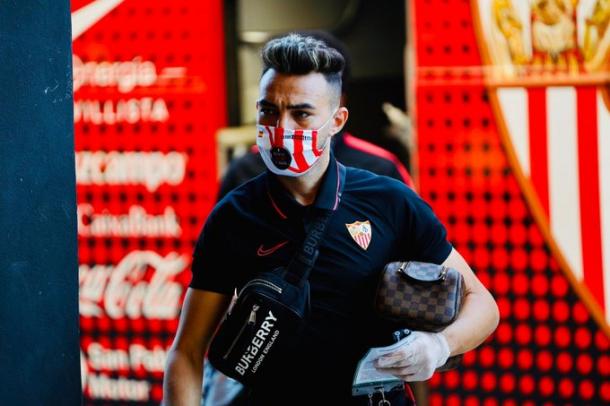 We're an hour away from kickoff and ready to bring you the best actions from the Sánchez Pizjuan.

Do not miss a detail of the match with the live updates and commentaries of VAVEL. Follow along with us all the details, commentaries, analysis and lineups for this Sevilla vs FC Barcelona match.
1:59 AMa year ago

Vaclik; Carlos, Kounde, Escudero, Navas; Gudelj, Jordan, Banega; El Haddadi, Ocampos, De Jong.
1:55 AMa year ago
Likewise, Lopetegui praised their rival and stated that they'll need to be at their best if they hope to win.

"Barcelona is a team with optimal individual quality which is enhanced thanks to its game idea. We have to try to find solutions to counteract them. We want to attack well and defend well; we must get close to our best version", he said. 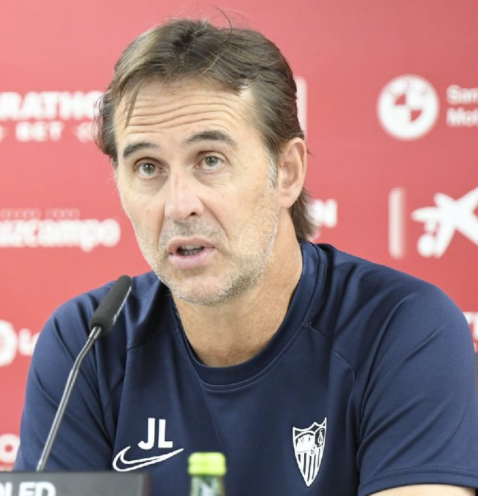 "Sevilla is doing a great championship. In these two games they have played, they've shown that they're at a good level and taking into account the previous results achieved, the reality is that we are going to face a team that is going to make things very difficult for us ", he said.

If you want to watch the game on TV, your options are beInSports and beInSports En Español.

1:45 AMa year ago
FC Barcelona wants to continue expanding its lead at the top of the table. In the fight for the league title, Real Madrid is only two points behind them, thus a win is crucial for the red-and-blue side.

Quique Setién's men have 64 points coming from 20 wins, 4 draws, and 5 losses. Their two most recent matches ended in victories despite good games from Mallorca and Leganés.

1:42 AMa year ago
Julen Lopetegui's side currently occupies the third position in the table with 51 points. They have 14 wins, 9 draws and 6 defeats that have them, at the moment, qualified for the UEFA Champions League.

After the forced break due to the global pandemic, they defeated Betis in their city derby and tied against Levante away from home.

The Sevilla FC vs FC Barcelona match will be played at the stadium name, in Sevilla, Spain. The kick-off is scheduled at 4:00 pm ET / 1:00 pm PT. 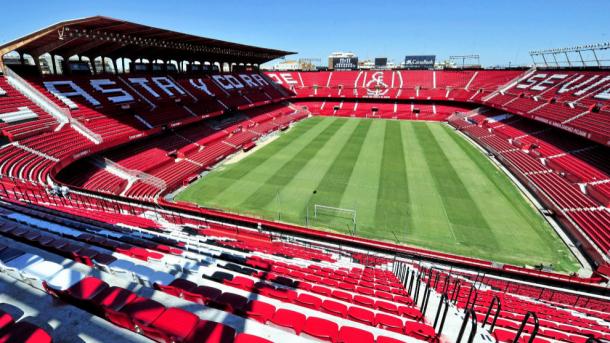