5:57 PMa year ago
We thank you for joining VAVEL for this match. Until next time!
5:56 PMa year ago

In a very closed game, Real Madrid was able to win thanks to a genius play from Benzema. They're now top of the league, two points ahead of Barcelona.
5:54 PMa year ago

Real Madrid doing everything possible to keep the ball away from their goal in the last few minutes.

They continue playing in Espanyol's half, but without creating danger or ending the play with a shot.

Four minutes of added time for the match.
5:48 PMa year ago

On the set pieces play, Calleri is just a few inches away from heading the ball in and equalizing it.
5:47 PMa year ago

Vinicius carded for a late challenge on Melendo.
5:45 PMa year ago

Rodrygo goes for goal, but he's well-marked by Pedrosa and the ball is deflected away from danger.
5:39 PMa year ago

The game resumes after the hydration break.
5:38 PMa year ago

The game pauses once more for a final cooling break.
5:35 PMa year ago

Espanyol with a great build-up play. The play ends with a shot from López caught by Courtois.
5:30 PMa year ago

Calleri and Melamed come on instead of Embarba and Darder.
5:28 PMa year ago

Pedrosa cautioned after a strong challenge on Carbajal.
5:26 PMa year ago

De Tomas goes for goal from a free-kick, but Courtois handles it well.
5:24 PMa year ago

Hazard and Isco are replaced by Vinicius and Rodrygo.
5:18 PMa year ago

Wu Lei is replaced by Melendo.
5:16 PMa year ago

Kroos attempts a shot, but it's off-target.
5:11 PMa year ago

From a very tight angle, Benzema is able to get a shot in towards the near post, but Diego López is well-positioned to make the save.
5:09 PMa year ago

Courtois makes a good save to a first-touch shot by Wu Lei.
5:07 PMa year ago

Didac is replaced by Pedrosa.
5:06 PMa year ago

We're underway with the last 45 minutes of the match.
5:04 PMa year ago

Just a casual backheel assist from Benzema, no big deal! 😍

Casemiro finishes and Madrid lead just before half time ⚪ pic.twitter.com/Vjhtl8ETbe

After a genius play from Benzema to assist Casemiro, Real Madrid wins at the break.
4:47 PMa year ago

Benzema receives the ball inside the box and then makes an amazing assist with his heel.

Casemiro scores with an open goal to put Real Madrid in front.

On multiple occasions, Diego López gets an arm on the ball to save Espanyol from the first goal of the match.
4:41 PMa year ago

The game continues to be a very hard-fought one. Both offensives lacking clarity to create chances.
4:37 PMa year ago

Benzema with a tremendous shot, but Diego López gets fingertips on it to send it to a corner kick.
4:33 PMa year ago

The game resumes after the cooling break.
4:32 PMa year ago

The game pauses for a hydration break.
4:31 PMa year ago

Wu Lei with a good chance to go through on goal, but he's stopped by Sergio Ramos.

The referee says there's no foul on the play.

Wu Lei with a decent attempt that goes over the crossbar, but the referee had already signaled for an off-side.
4:25 PMa year ago

Very long ball from Casemiro looking for Isco that would leave him one on one with the keeper, but he fails to make a good control and another chance is wasted.
4:21 PMa year ago

From a free-kick on the right, Courtois is tested.

The Belgian keeper has to wait until the last minute to see if anybody deflects the ball and then makes a great diving save.

The Whites continue to pressure up high with Espanyol struggling to leave their own half.

Despite the larger possession of the ball, Zidane's men haven't been able to get a dangerous shot on target.

Real Madrid has taken control of the match.

From a corner kick, they manage to head the ball twice inside the box but Casemiro is unable to finish it properly.

Casemiro finds a rebound inside the box and tries going for goal with a powerful shot.

Ramos tries heading it in as the shot was off-target, but the attempt ends up being too high. A good chance goes to waste.

First clear chance of the match for Espanyol.

Wu Lei runs down the right flank and crosses it. At the far post, Darder shoots, but the ball takes a deflection.

Embarba tries his luck from a long-range free-kick, but Courtois handles it well.
4:01 PMa year ago

We're underway with the match between Espanyol and Real Madrid.
3:59 PMa year ago
Both teams have stepped onto the pitch and we're ready for the kick-off!
3:58 PMa year ago
We're less than 5 minutes from the start of the match!

3:51 PMa year ago
The home team is ready for the start of the match as they've just finished their warm-up


3:40 PMa year ago
Ferland Mendy and Luka Modric are both unavailable for tonight's match as they're suspended for one match after accumulating five yellow cards.
3:33 PMa year ago
If Thibaut Courtois manages to keep a clean sheet tonight, Real Madrid will be top of the table.

A draw places them with the same points as Barcelona but in better position due to the tie-breaking criteria, while a win would mean a two-point lead over their historic rivals. 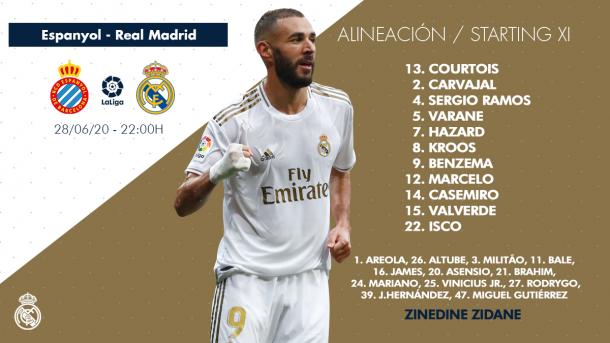 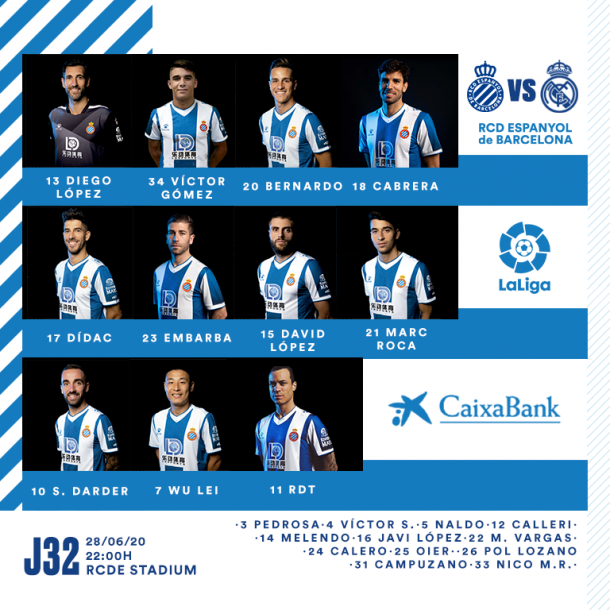 3:06 PMa year ago
The home team also made its arrival to the venue of tonight's match hoping to get some points against a really difficult Madrid side.

Will the debuting coach Rufete be able to get the w?

3:05 PMa year ago
Real Madrid arrived a few minutes ago to RCD Stadium. The players are now in the locker room getting ready for their warm-ups and for the start of the match.

We begin our LIVE coverage of the game between Espanyol and Real Madrid.

We're an hour away from kick-off. Starting lineups are coming soon.

Do not miss a detail of the match with the live updates and commentaries of VAVEL. Follow along with us all the details, commentaries, analysis and lineups for this RCD Espanyol vs Real Madrid match.

Diego López; Bernardo, David López, Cabrera; Pedrosa, Pipa; Marc Roca, Melendo, Embarba; Calleri, Raúl De Tomas.
11:30 AMa year ago
The last victory of Espanyol over Real Madrid came in the second half of the 2017/2018 season, when they managed to walk away with the three points thanks to Gerard Moreno's goal in the 93rd minute.
11:28 AMa year ago

On their last visit to Cornellà, Zidane's men managed to get a comfortable victory by 4 goals to 2, although at that time they were coached by Santiago Solari.

The first half ended with 4 goals: 3 from Madrid by Benzema and Ramos; and 1 by Leo Baptistao for the parakeets.

In the second half, Bale scored the fourth for Real Madrid and Roberto Rosales scored a second for Espanyol.

If you want to watch the game on TV, your options are beIn Sports and beIn Sports En Español

Espanyol's disaster contrasts sharply with Real Madrid's good form. The Merengues lead the competition having chained 4 wins out of 4 possible after the re-start of La Liga.

Zidane's men will try to take advantage of Barcelona's draw against Celta de Vigo yesterday by winning tonight. A victory would place them on top of the table, two points ahead of their rivals with only six games to go.

Espanyol will host Real Madrid without Abelardo who has been dismissed as the head coach due to the poor results.

His balance was of 5 wins, 5 draws, and 7 losses. The 1-0 defeat at the Villamarín was the straw that broke the camel's back. As of today, Espanyol is bottom of the table, 8 points away from getting out of relegation zone, and will certainly be playing in the second division next year.

Francisco Rufete, former Espanyol player and who had been working as a sporting director, will be the one who sits on the bench in the duel against the Whites.

11:13 AMa year ago
The RCD Espanyol vs Real Madrid match will be played at the Estadi Cornellà-El Prat, in Barcelona, Spain. The kick-off is scheduled at 4 pm ET/ 1 pm PT. 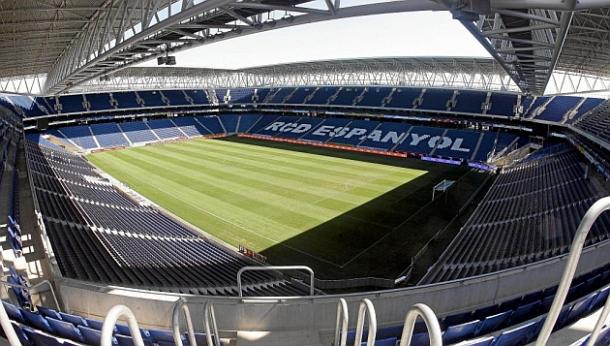 My Juan Pablo Rodriguez and I’ll be your host for this game. We will provide you with pre-game analysis, roster updates, and news as it happens live here on VAVEL.