Barcelona with another painful draw in their quest for the La Liga title. Atleti continues its good run of form and remains third in the table.
5:58 PMa year ago

Messi crosses, but the defense gets it out!
5:57 PMa year ago

Lemar is cautioned for a foul on Fati near the corner. This will be Barcelona's last chance.
5:57 PMa year ago

Atleti giving Barcelona tons of trouble when they attack.

The Blaugrana defense really struggles to clear the ball before a shot can happen.

Griezmann will have the last minutes of the match to try to win it.

Cross whipped in towards the far post. Ansu Fati heads it, but the referee signals for a foul from the youngster.
5:50 PMa year ago

Busquets leaves his place on the pitch for Ansu Fati.
5:48 PMa year ago

Correa and Carrasco are replaced by Lemar and Vitolo.
5:45 PMa year ago

In a set-pieces play, Busquets attempts to find the winner with a header, but the ball is off-target.
5:43 PMa year ago

It's now Carrasco who is cautioned for a foul on Messi.
5:41 PMa year ago

Diego Costa, who had just seen the yellow card, is substituted by Alvaro Morata.
5:40 PMa year ago

The game pauses for the second and final hydration break.
5:40 PMa year ago

Vidal in good position to score with a header, but it's again wide!
5:37 PMa year ago

Joao Felix goes for goal, but his attempt is straigth at Ter Stegen's hands.
5:35 PMa year ago

Vidal starts a play by quickly taking a free-kick near midfield.

After intervention from Messi and Semed, the Chilean ends up ending the play with a shot that is barely off-target!

Joao Felix comes on instead of Llorente.
5:33 PMa year ago

Barcelona gets back on the attack as they need the win to stay in the title fight.

Great build-up play between Semedo, Messi and Vidal that ends up in a clearance from Arias.

Rakitic is replaced by Sergi Roberto.
5:26 PMa year ago

Saúl takes the penalty again. Despite Ter Stegen's touch on the ball, it goes in and we're equalized again!
5:26 PMa year ago

Semedo fouls Carrasco inside the box and Atletico will have a chance to equalize!
5:25 PMa year ago

Messi gets a yellow card after disapproving a decision by the referee.
5:20 PMa year ago

Diego Costa very close to scoring with a header!

The attempt is just inches away from Ter Stegen's right post.

Do you have an all-time favorite #Messi goal?

Felipe now sees a yellow card for a foul in midfield.
5:14 PMa year ago

Felipe is late to a challenge on Semedo inside the area, and Messi will have a chance to score fromthe spot.
5:09 PMa year ago

We're underway with the last 45 minutes of the clash between Barcelona and Atletico Madrid.
4:51 PMa year ago

We go to the break with the match equalized.
4:51 PMa year ago

Carrasco drives the ball from midfield, making his way towards the box.

He gets to the edge of the box and goes for goal, but Barça's center backs are able to get in the way and block his shot.

Messi takes a free-kick which takes a deflection off the wall.

Oblak has to change his trajectory and is barely able to fingertip it over the crossbar.

The match continues with over 60% of possession for Barça, however,, Atletico Madrid continues to fend off all attacks.
4:37 PMa year ago

Saúl is cautioned after fouling Messi near midfield.
4:35 PMa year ago

Arias sends a beautiful cross, but both Correa and Llorente are unable to strike towards goal despite touching the ball.
4:32 PMa year ago

The game pauses for a cooling break.
4:31 PMa year ago

Alba serves a ball for Messi who tries shooting on his first touch, but the attempt is too wide to worry Oblak.
4:29 PMa year ago

Barcelona managing to string long possessions, but unable to create any clear chances.

The Colchoneros waiting and marking carefully, always looking to hit the rival on the counter-attack.

Messi gets into the box and curls a beautiful shot that is inches from going in!

What a goal that would've been!

This time it's Saúl taking the penalty kick. He sends Ter Stegen the other way and equalizes it!
4:20 PMa year ago

VAR shows that Ter Stegen was not on the goal line at the moment the penalty was taken and we will repeat the play.

The Barcelona goalkeeper was shown a yellow card due to this.

Diego Costa takes the shot from the spot, but Ter Stegen makes the save!
4:18 PMa year ago

Carrasco makes a run inside the box and does a quick cut towards the inside causing Vidal to foul him.
4:16 PMa year ago

Messi takes a corner-kick towards the first post. Diego Costa tries to get the ball out, but it goes between his legs and finds the back of the net!
4:10 PMa year ago

Rakitic recovers near the opposing box and fires a shot that forces a diving save from Oblak.
4:09 PMa year ago

No one is able to tap the ball in and it ends up being inches wide from the far post.

Cross towards the far post looking for Llorente, but Jordi Alba gets to the ball before the Atletico player could hit a volley.
4:04 PMa year ago

The first attempt by Barcelona.

Riqui Puig finds Luis Suárez just outside the box. The Uruguayan shoots on his first touch, but the attempt is easy for Oblak.

We're underway with the match between FC Barcelona and Atletico Madrid!
3:57 PMa year ago
Both teams step onto the pitch as we get ready for the begining of the game.
3:53 PMa year ago
The pre-match warmups are finished! Both teams go back to their locker room for the final talk before the kickoff!

We're less than 10 minutes away from kick-off! 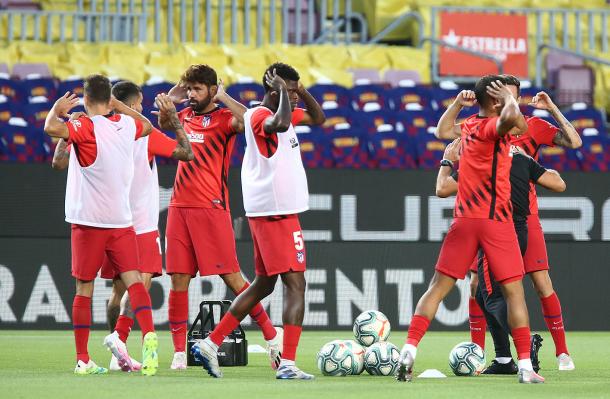 3:47 PMa year ago
Barça won 1-0 at the Wanda Metropolitano in the reverse fixture earlier this season, Leo Messi grabbing the winner with just four minutes to go.
3:40 PMa year ago
Everything set in the away locker room. The traditional red-and-white shirt awaits as the Atletico players finish up their warm-up. 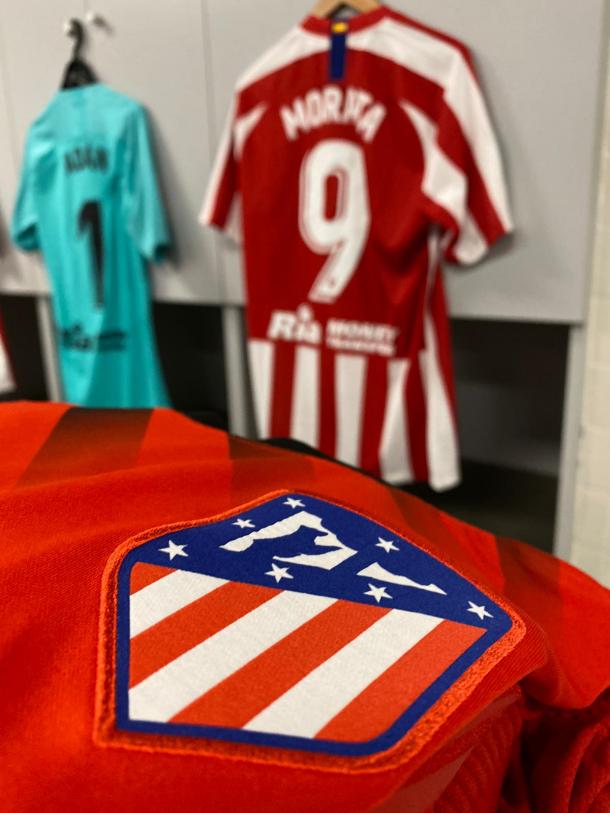 3:32 PMa year ago
FC Barcelona has added 3000 personalized shirts to the stands at Camp Nou so the players can get some sense of support despite the empty stadium 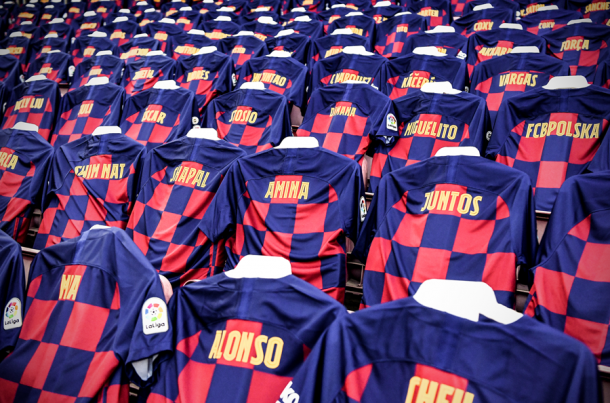 The Barcelona warm-up stream is LIVE!

⚽️ When it’s over we will see you on Barca TV+ with post game analysis and reactionshttps://t.co/v28AM27Zzq#OnlyForCulers https://t.co/psMwJFGESb

"Games with Atlético Madrid are tremendously tight and difficult. They are very sure about what they have to do. But winning has become more decisive than ever because every game we play there is one fewer fixture left.”
3:17 PMa year ago 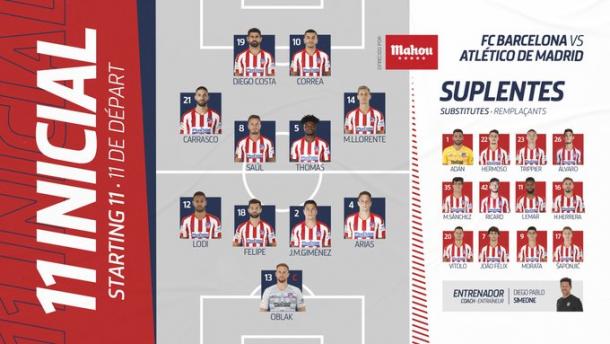 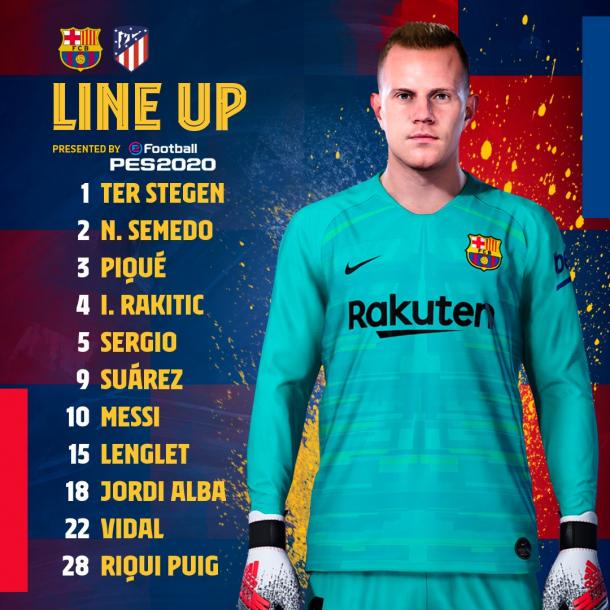 
3:03 PMa year ago
The Atleti players left their hotel in Barcelona about an hour ago for the stadium. A win today would be a huge step for them as they hope to secure a UEFA Champions League group stage berth for next season. 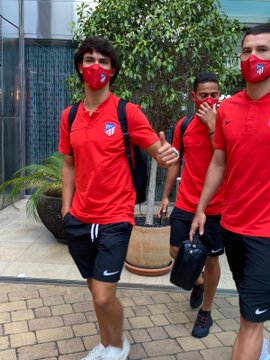 3:01 PMa year ago
The FC Barcelona players have arrived at their home ground for this crucial match. If they hope to win the title, they'll need to win at any cost.

Our LIVE coverage of the FC Barcelona vs Atletico Madrid starts now.

We're an hour away from kick-off. Lineups are coming soon!

Do not miss a detail of the match with the live updates and commentaries of VAVEL. Follow along with us all the details, commentaries, analysis, and lineups for this FC Barcelona vs Atletico Madrid match.
12:34 AMa year ago

Monday morning, FC Barcelona announced that they had reached an agreement with Juventus for the transfer of midfielder Miralem Pjanić. The cost of the operation will be 60 million euros plus 5 million in variables.

As part of the negotiations, Arthur Melo will be going to the Italian side who will pay 72 million euros, plus 10 million euros in variables. 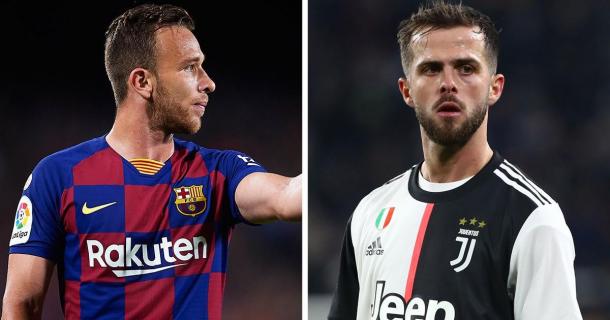 Both teams have faced each other a total of 165 occasions in the Spanish league, with a favorable balance for Barcelona with 75 wins, 40 draws, and 50 losses.
12:28 AMa year ago

'Cholo' excited for the match at Camp Nou

His Atletico Madrid counterpart, Diego Pablo Simeone, seemed excited to face a team which he thinks is perhaps the best in the world

"Every game that we have to play against any important team generates enthusiasm", he said. 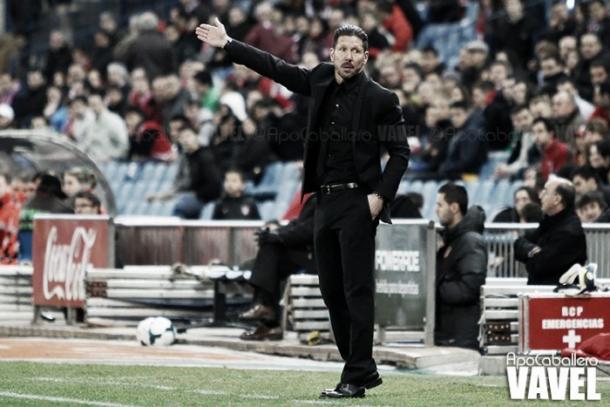 Quique Setien owns up to his mistakes

The Barcelona boss talked about the loss of the first position of the table.

"I think I am doing everything I know and I can to make this go well and win games. That keeps me calm. Sometimes the results do not depend on me. When you lose, you have to endure criticism". 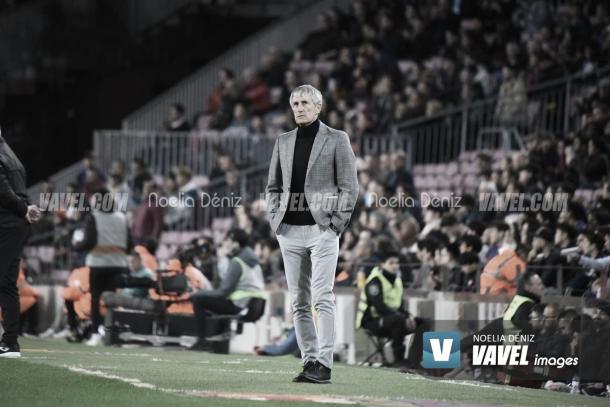 If you want to watch the game on TV, your options are beIn Sports and beIn Sports En Español.

In the fight for the UCL

Atlético de Madrid is currently third in the table and in a clear fight with Sevilla for direct qualification to the UEFA Champions League group stage.

Last Saturday, they got the three points at the Wanda Metropolitano when they won 2-1 against Alavés. The goals of Saúl Ñíguez and Diego Costa were enough to give them an all-important win.

Barcelona in a difficult situation

The Catalans went to Balaídos with the need to win. Although the team played its best game since the return from confinement, Iago Aspas' late goal left them with a bitter taste and a 2-2 draw.

On Sunday, Real Madrid was able to get an important victory at Espanyol and is now the leader with a two-point advantage over their rivals.

The FC Barcelona vs Athletic Club de Bilbao match will be played at the Camp Nou, in Barcelona, Spain. The kick-off is scheduled at 4:00 pm ET/1 pm ET. 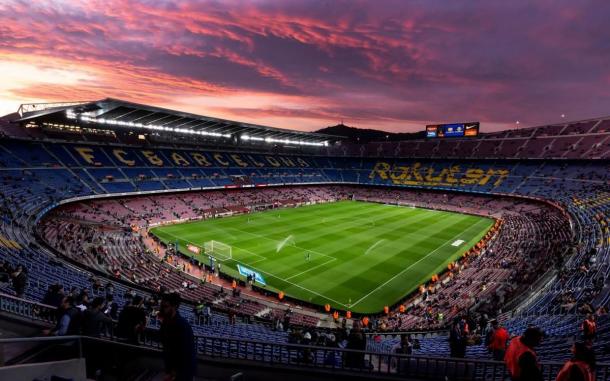