Real Madrid was a victim of its own mistakes tonight, losing to a very tough Manchester City side. Guardiola's men lead by De Bruyne and Jesus showed great football and will be favorites in the quarterfinals.
4:49 PMa year ago

An injured Rodrigo is replaced by Otamendi.
4:45 PMa year ago

David Silva takes a free-kick that just a few inches over the crossbar.
4:43 PMa year ago

Zidane goes all in!

This will be Silva's last match as a City player at Etihad.

Modric is cautioned after a foul on De Bruyne near midfield.
4:35 PMa year ago

Jesus makes space to shoot from the edge of the box, but the ball is nowhere near the target.
4:31 PMa year ago

Walker shoots causing Courtois to dive and save it!
4:31 PMa year ago

We can expect more goals in this match as Madrid needs two to progress onto the next round, while City will try to finish it off with one more goal.

Gabriel Jesus with the 2-1 for City!

Another huge mistake by Varane!

He tries to head the ball to Courtois but leaves it too short, leaving Gabriel Jesus in position to score!

The striker doesn't forgive them this time and it's 2-1 for City!

Foden leaves his place on the pitch for Bernardo Silva.
4:25 PMa year ago

Tremendous save by Courtois an attempt by Gabriel Jesus!

The Brazilian had received the ball inside the box and delivered a quick shot after turning around.

Asensio lays the ball off to Benzema who cuts inside to make some space and shoots.

Ederson is well-positioned to make the save.

Benzema looking for space to shoot, but Laporte blocks his attempt!
4:21 PMa year ago

Marco Asensio replaces Rodrygo as the right-winger for Real Madrid.
4:20 PMa year ago

Manchester City is now in control of the ball causing the Real Madrid defensive players to employ themselves and chase after the ball.
4:17 PMa year ago

De Bruyne gets inside the box and looks for space to shoot.

Carvajal makes a great defensive run to cause a corner kick.

Benzema shoots over the crossbar.
4:14 PMa year ago

Casemiro gives the ball away in their own half, but City is unable to take full advantage of the situation.

The chance is wasted when a bad pass towards Sterling forces him to finish it wide.

Kroos shoots from long distance, but Fernandinho gets his head in the way to block the shot.
4:07 PMa year ago

De Bruyne once more tries scoring from the corner, but again Courtois reads the play perfectly.
4:06 PMa year ago

Sterling is through on goal after a great pass from De Bruyne.

Courtois is able to make the save to a powerful shot by sending the ball to corner kick.

We're underway with the second 45 minutes of this second leg.
3:48 PMa year ago

We go to the break with 1-1 in the scoreboard.

Man City leads 3-2 on the aggregate. A goal from Real Madrid would force extra time.

De Bruyne tries scoring straight from the corner kick, but Courtois just manages to keep it out!
3:45 PMa year ago

Benzema hits a nice volley inside the box, but the referee signals for an off-side!
3:45 PMa year ago

The last pass from Sterling looking for De Bruyne is intercepted by Carvajal!

After a bad clearance from Courtois, Foden shoots from the edge of the box but the ball is just wide from the post!
3:39 PMa year ago

Cancelo finds space to shoot forcing a save from Courtois.

The rebound is down the middle, but Militao manages it clear it before any attacking player could tap it in.

Walker dribbles his way to about 5 yards outside the penalty area and shoots.

The attempt is too high to worry Courtois.

Benzema with the equalizer!

The first goal of the match by Sterling

Rodrygo finds the end-line and places a perfect cross for Benzema.

The #9 heads it towards the post and leaves Ederson without a chance!

Manchester City is finding plenty of space when they're able to get past the midfield line.

This time Cancelo is unable to find Sterling with a through ball.

Hazard with a powerful shot that is very well contained by Ederson.

The keeper does not give a rebound despite the force behind the ball.

Hazard connects with Benzema. The Frenchman manages to turn around to face the goal and shoots.

Ederson is forced to dive to his left and make the save!

Sterling gets inside the box and dribbles Militao away.

As he was getting ready to shoot, Casemiro makes a terrific sliding tackle and Courtois gets to the ball.

Sterling takes a shot that is just inches above the crossbar.

Courtois dived to make the play even more spectacular.

Modric shoots well over the bar.
3:14 PMa year ago

Foden gets inside the box and tries to finish it with his left.

Militao barely gets there in time to make the block, but City is really making Real Madrid work with high pressure.

Terrible mistake by Varane who loses the ball to Gabriel Jesus in his own box.

The Brazilian passes it to Sterling who opens up the scoreboard to an empty goal!

De Bruyne tries his luck from long distance, but the ball is deflected off the body of Mlitao for a corner kick.
3:05 PMa year ago

Real Madrid taking control in the early stages of the game.

Zidane's men will attempt to continue playing with possession of the ball.

We're underway with the match between Manchester City and Real Madrid!
2:58 PMa year ago
The Champions League anthem plays as both teams step onto the pitch!
2:45 PMa year ago

Ederson and the rest of the Man City squad have just finished warming up too! 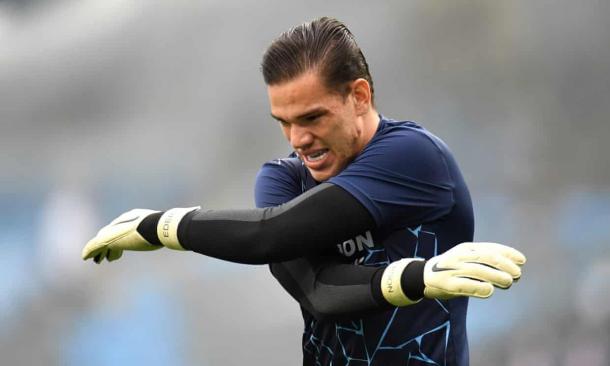 Real Madrid has begun its warm-up! 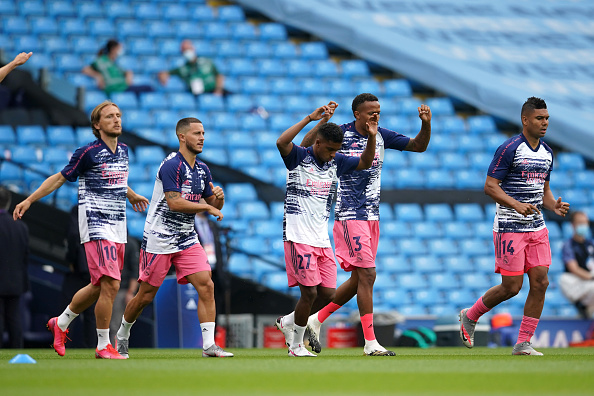 2:31 PMa year ago
This is the ball that will be played tonight at Manchester!

We're half-hour away from the class between City and Madrid! 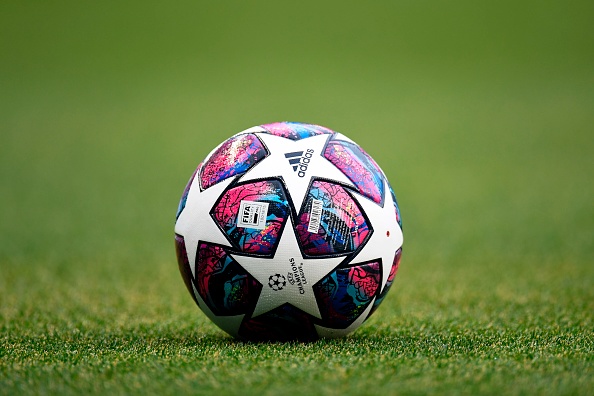 Real Madrid is also now at the Etihad!

⚪️ Real Madrid have won their last 7 away matches in the round of 16... @realmadriden | #UCL pic.twitter.com/7OxI1wCzeA

The home team makes its arrival to the City of Manchester Stadium!

2:17 PMa year ago
If 'Los Blancos' hope to make a comeback tonight, Karim Benzema will have to play his usual top-level football.

Here are some of his numbers with his current club: 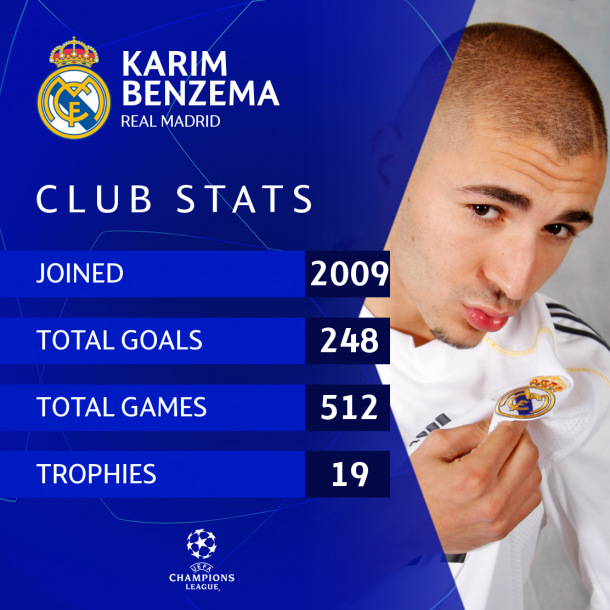 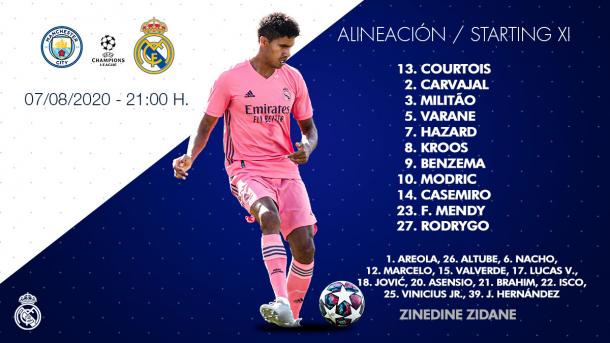 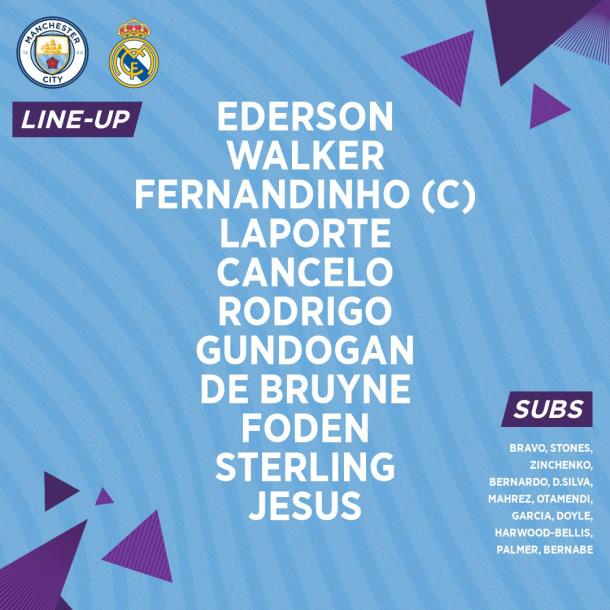 Despite this huge cost, Real Madrid will not use him tonight and left him, along with James Rodríguez, out of its squad list. 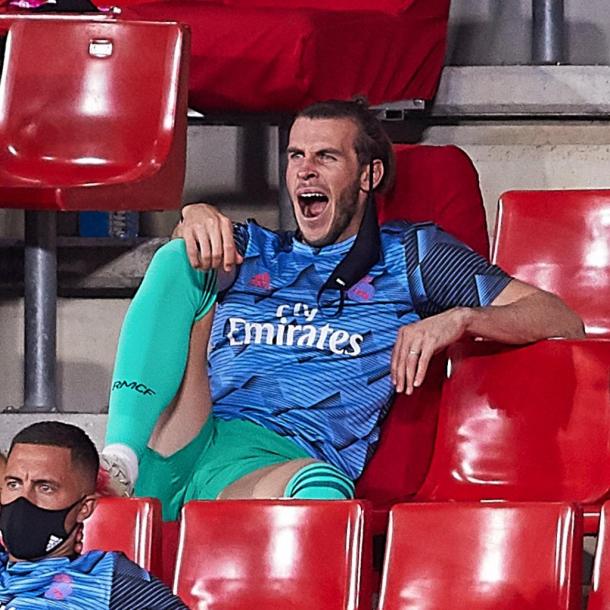 Everything ready at the Etihad Stadium for this second leg of the Round-of-16!

We're an hour away from kick-off.

Do not miss a detail of the match with the live updates and commentaries of VAVEL. Follow along with us all the details, commentaries, analysis and lineups for this Manchester City vs Real Madrid match.
11:55 AMa year ago

Match History at the Etihad

This will be the third time Manchester City hosts Real Madrid at the City of Manchester Stadium.

11:53 AMa year ago
German referee Felix Brych is the man assigned by UEFA to officiate tonight's clash between Man City and Real Madrid.

This will be the tenth time he referees a Real Madrid match, with only one defeat for them (1-4 vs Ajax) when Brych is in charge. 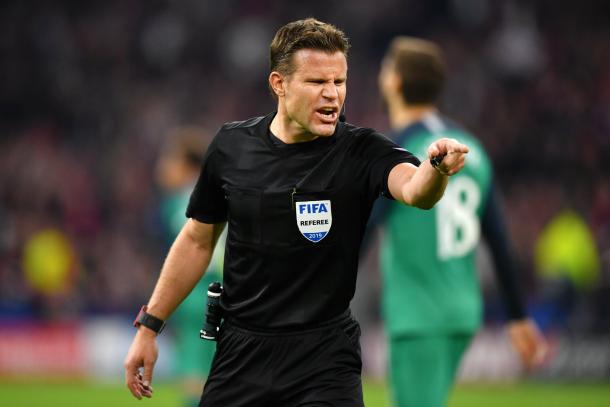 'The Whites' have a record of 5 wins, 3 draws, and 3 losses when playing Champions League games in British soil.

The teams that have suffered from Real Madrid's dominance and lost against them are Manchester United, Leeds, Liverpool, and Spurs.

Manchester City in a good position to move forward

In UEFA Competitions, the 'Citizens' have progressed in all previous seven occasions in which they won the first leg away from home.
11:46 AMa year ago

If you want to watch the game on TV, your options are TUDN and CBS.

If you want to directly stream it: TUDN App and CBS All Access.

The Argentine superstar suffers from a knee injury that has sidelined him for this match. 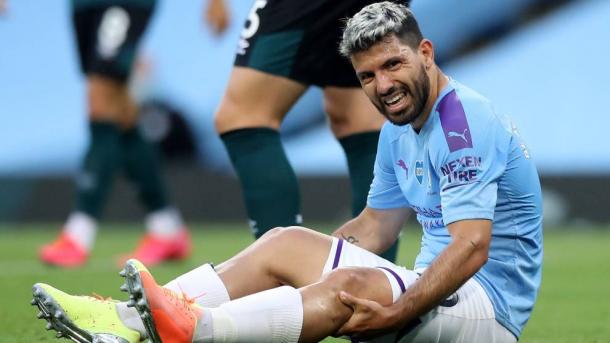 Real Madrid won't count with their captain Sergio Ramos who is facing a suspension after being sent off in the first leg.

Mariano will also be unavailable for use as he has tested positive for COVID-19.

Zinedine Zidane left James Rodríguez and Gareth Bale out of the squad list, as the players are likely to leave the club. 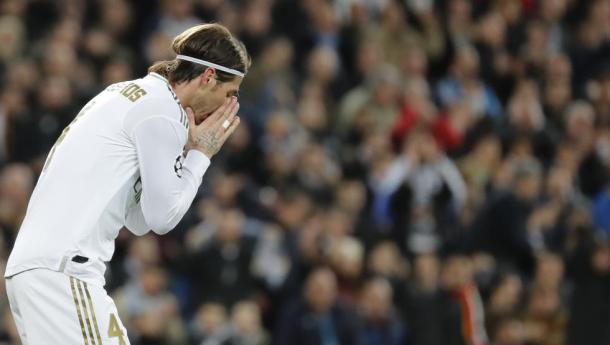 The second leg was postponed due to the COVID-19 pandemic and will now be played at Etihad behind closed doors.

In the first leg, City came away with a 1-2 victory which would allow them to progress onto the next round with a victory, a draw, or a 0-1 defeat.

The Manchester City vs Real Madrid match will be played at the Etihad Stadium, in Manchester, England. The kick-off is scheduled at 3 pm ET | 12 pm PT. 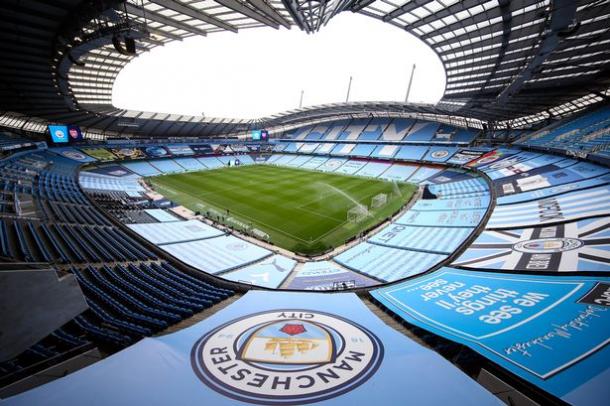 Philadelphia Union vs Chicago Fire preview: How to watch, kick-off time, team news, predicted lineups, and ones to watch 11 hours ago
//