Thanks for tuning in to this Pachuca 0-0 Toluca.
Remember to follow us on the next live broadcasts, with all the information on your favorite team.
11:10 PM5 months ago

Great game of the goalkeeper Tuzo

Ustari has been chosen by the Liga MX  as the player of the match because he made a great save that saved his team.

The match ends with a draw: Pachuca 0-0 Toluca.

Both teams tried to go ahead in the second half but could not score goals.

Arrived in the area of Souza who assisted Leo Ramos, the latter shot with the heel but the ball hit the goalkeeper and saved the Toluca.
10:59 PM5 months ago

Estrada tried to surprise with a shot from midfield but it came out on top of Ustari's goal.
10:53 PM5 months ago

Sambueza fights all the balls in midfield and does not allow Pachuca to advance.
10:49 PM5 months ago

Yellow card for Castañeda for a strong foul near the area against Guzmán.
10:44 PM5 months ago

After checking in the VAR, the referee cancels the penalty and everything goes 0-0.
10:37 PM5 months ago

Fernando Hernández scores a penalty for Tuzos for a hand of Cisneros in the area.
10:34 PM5 months ago

The game has begun to move with speed from side to side, but they are not able to make it to the last zone of the field.
10:29 PM5 months ago

Ustari saves a great header in the area, after a corner kick Sambueza charged excellent.
10:25 PM5 months ago

Davila takes a long shot, but the ball opens at the end and goes wide.
10:19 PM5 months ago

Yellow card for Víctor Guzmán for a strong foul in midfield.
10:17 PM5 months ago

Pardo leaked a great pass to Victor Guzman who took off the Toluca goalkeeper but missed the shot.
10:13 PM5 months ago

The possession and numbers have been in favor of the locals, however, has not yet been reflected in the score.
Will Pachuca and Toluca manage to score goals in the second half? 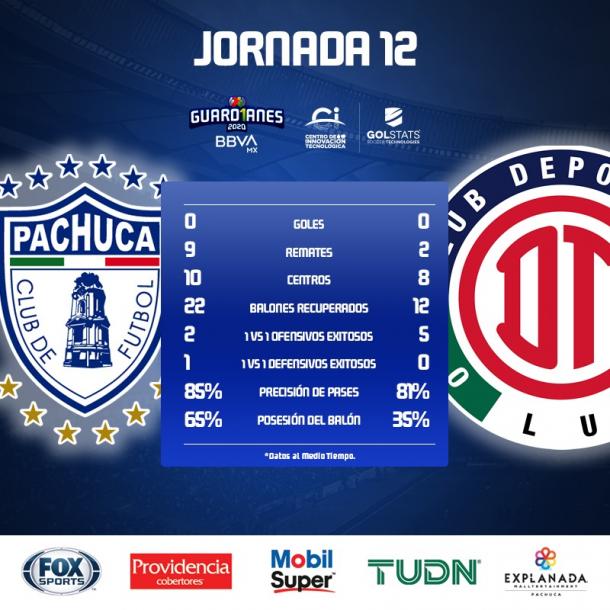 The referee signals the half time, and the score is still not opened in the match Pachca vs Toluca.
9:49 PM5 months ago

New center to the area by Sosa but Toluca's defense is impassable by air.
9:40 PM5 months ago

Sosa's service for Pardo who was a step away from the ball and could not make contact.
The Toluca is being saved!
9:38 PM5 months ago

Ball filtered to Felipe Pardo who entered the area alone and shot at the first post but the ball hit the net on the outside.
9:34 PM5 months ago

New defensive cut by Sauro with the head, before a good center by Felipe Pardo.
9:30 PM5 months ago

Dávila is encouraged to shoot from outside the area, he took a powerful left-foot shot but it went over Luis García's goal.
9:26 PM5 months ago

Pachuca throws crosses into the area but defender Sauro has cut them very well on two occasions.
9:19 PM5 months ago

First arrived dangerously from Toluca, Cisneros can not finish in the area with the goal alone, he tripped over the ball.
9:14 PM5 months ago

Yellow card for Medina of Toluca that conditions the match.
9:12 PM5 months ago

Fernando Hernández blows his whistle and the game starts at Hidalgo Stadium.
9:10 PM5 months ago

To break the drought in the "bella airosa"

Toluca has gone five years without winning at the Hidalgo Stadium against Pachuca, the last time this happened was on Round 12 of the 2015 Apertura.
In this victory for the Mexico State team, the four goals were scored by Fernando Uribe, who is currently playing for Santos in Brazil. 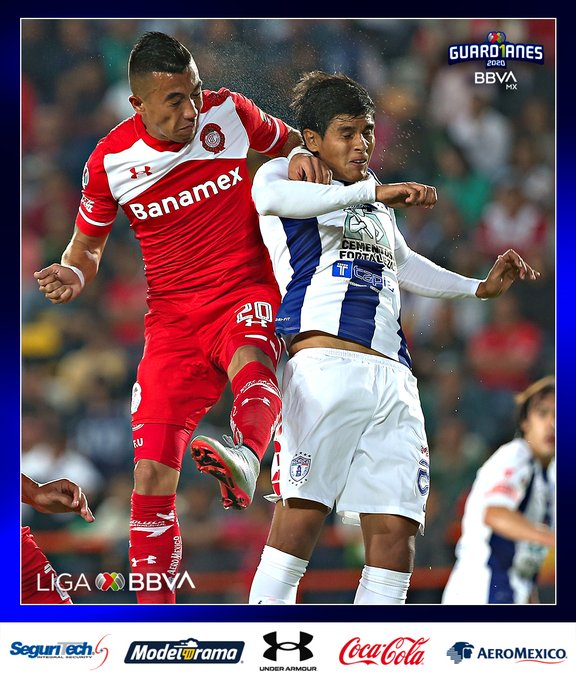 Pachuca central defender Oscar Murillo will be playing his 150th game in the Liga BBVA MX.
The Colombian signed with the Tuzos in the Clausura2016 tournament, becoming a reference for the team, nicknamed "the wall" and has scored five goals. 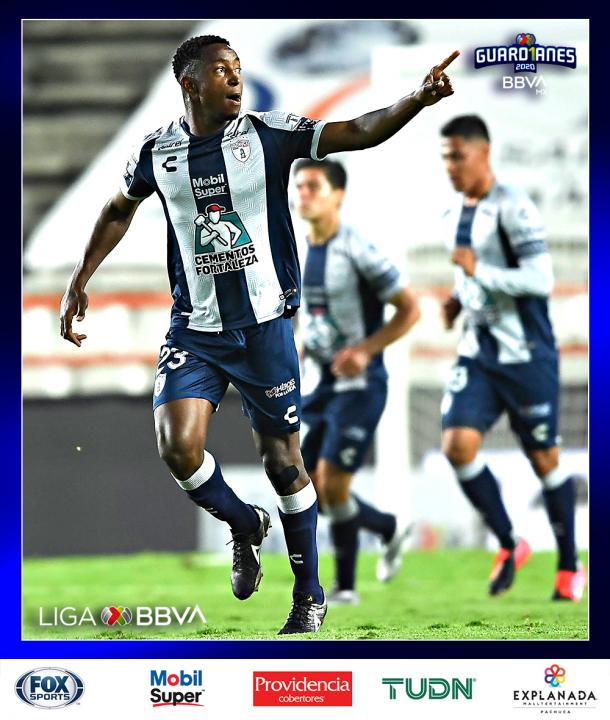 Big welcome for the Tuzos

With flares and chants the Albicelestes fans received the first team outside their stadium, in the video you can see that they wear mouth guards as a preventive measure against the Covid-19 although they will not be able to enter the stadium.

The Toluca arrived at the Hidalgo stadium

The "devils" are in need of victory in order not to leave the qualification zone and if possible also to be among the teams qualified for the quarterfinals.

They are already in the right place to face their game tonight.

The "Tuzos" will look for an opportunity to qualify among the first four places and have automatic access to the quarterfinals. 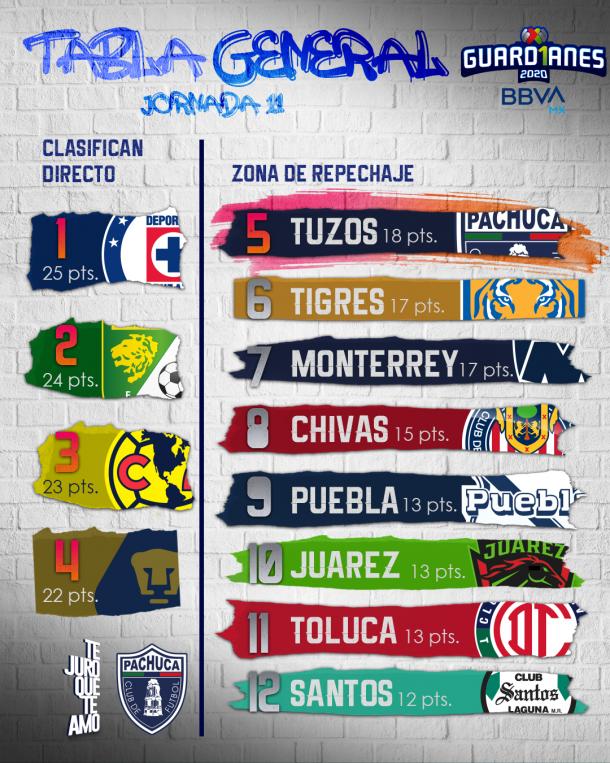 The "Tuzos" will look for an opportunity to qualify among the first four places and have automatic access to the quarterfinals.
8:03 PM5 months ago

Tonight we have a great match ready for you that will start the 12th matchday of the Guard1anes 2020 tournament.

Pahuca vs Toluca in a few moments we will bring you the line-ups for the game.

Tune in to VAVEL USA tonight!

Remember to follow the LIVE broadcast where we will bring you the line-ups, data and everything related to the match between Pachuca and Toluca.

The "Devils" arrived at the "bella airosa"

The "Chepo" team is already in Pachuca waiting for tonight's game.

Where and how to watch Pachuca vs Toluca

The match will be televised on TUDN USA.

If you prefer to follow the game live on the Internet, VAVEL USA is your best option.

Last match between Pachuca and Toluca

Last tournament, this match could not be played on matchday 11 because of the Covid-19 pandemic.

However, the last match played by both teams was on October 27, 2019 at the Nemesio Diez stadium, where the "Red Devils" won 2-0 with goals by Luis Donaldo Hernández and Felipe Pardo, the latter now playing for the rivals.

One of the most recent additions to the "devils" is Ecuadorian striker Michael Estrada.

In spite of the bad moment that the team of the Estado de México, he managed to score in the last game against Santos, and he has already scored 3 goals in the tournament.

Five games without a win for the "devils

Toluca started the tournament with a very good rhythm, even defeating Tigres and Chivas in a consecutive way, but since the 6th matchday onwards they have not been able to achieve a new victory.

The team of "Chepo" has been left with 13 points and has just lost against Santos by a score of 2-1 in the Nemesio Diez.

After all the controversy that arose around Victor Guzman, the player has shown that he is a professional on the court on more than one occasion.

That is why he has the support of his team, and he already gave the victory to Tuzos last day.

This match will open the 12th match of the tournament, which is already in the final stretch.

The Tuzos are fighting with 18 units to qualify among the first four places, since from the fifth to the twelfth they will play their classification in a repechage.

In the previous match, Pachuca beat Atlas 1-0 in a complicated game and with a penalty charged in good form by Victor Guzman.

The Pachuca vs Toluca match will be played at the Hidalgo stadium, in Pachuca, México.

Welcome to VAVEL.com’s LIVE coverage of the Guard1anes 2020 match: Pachuca vs Toluca