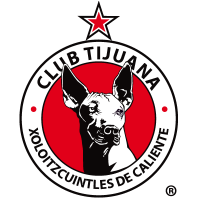 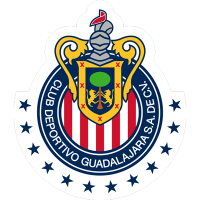 Thanks for joining VAVEL for this match!

In a lackluster game, Chivas and Xolos could not break the deadlock and add one point to their tally in search for a spot in the playoffs.
11:54 PM22 days ago

A seemingly injured Calderón is replaced by Ponce.
11:52 PM22 days ago

Antuna and Vega leave their place on the field for Zaldívar and Peralta.
11:47 PM22 days ago

Leal and Castillo are replaced by Aboagye and Barbona.
11:44 PM22 days ago

Xolos has a difficult time leaving their own half thanks to Chivas' high pressure.
11:37 PM22 days ago

On a set-pieces play, Chivas attempts a double contact inside the box.

Briseño heads the ball down placing Mier in scoring position, but the Chivas player is unable to tap it in and a huge chance is wasted!
11:31 PM22 days ago

Angulo and Macías are replaced by Beltrán and Villalpando.
11:30 PM22 days ago

The ball is inches away from its intended target and a good chance goes to waste.

The match has notably decreased in quality. There are lots of rebounds in midfield, long balls and incomplete passes.
11:20 PM22 days ago

Leal is left one-on-one with Gudiño.

The keeper approaches him quickly to reduce his shot angle and blocks the ball.

Antuna sends a good cross looking for two men inside the box, but Orozco does well to intercept it.
11:10 PM22 days ago

We're underway with the last 45 minutes of the match between Tijuana and Guadalajara.
11:05 PM22 days ago

We go to the break without a change in the scoreboard.
10:53 PM22 days ago

Again Vega shoots from long-range, but fails to find the target.
10:48 PM22 days ago

Castillo gets a yellow card for a late challenge.
10:47 PM22 days ago

Loroña heads the ball to the crossbar.

On the rebound shot, the ball went in, however the referee sees foul on the keeper and it won't count.

Castillo manages to give the ball to López inside the box.

He manages to get a shot in and Raúl Gudiño makes a tremendous save!

The game has gotten denser in midfield during the last minutes.

The pace has decreased and the scoring chances have been absent.

Vega tries his luck from long distance, but the attempt is very wide.
10:32 PM22 days ago

Luis Leal continues to give the Chivas defender some issues.

This time a low-cross from Lainez almost finds him a scoring position. Luckily for Chivas, Mier was there to get to the ball first.

It seemed like a good chance, but the young striker was caught offside.

A cross comes in from the left finding Luis Leal inside the box.

The header of the Xolos striker goes inches over the crossbar.

Angulo takes a shot on goal. Orozco has to send it to corner kick as the ball bounced a few feet in front of him.
10:19 PM22 days ago

Luis Leal found a decent space to take a shot, but Briseño deflected it before the ball could reach the goal.
10:16 PM22 days ago

Guadalajara has started the game a little better than Xolos.

There's little play in midfield, however both teams still lack precision to create any real danger.

Macías with his first attempt on goal.

He shoots from long distance forcing a tremendous diving save from Orozco!

We're underway with the match between Xolos and Chivas!
10:03 PM22 days ago

Both teams step onto the artificial turf at Estadio Caliente as the Liga MX anthem plays!

We're instants away from the start of the match.

With the absence of Sepúlveda tonight, Hiram Mier remains as the only player who can play all minutes of the Guard1anes 2020 for Chivas.
9:51 PM22 days ago

Both Chivas and Xolos are just about finished with their pre-match preparations. We're 15 minutes away from kick-off! 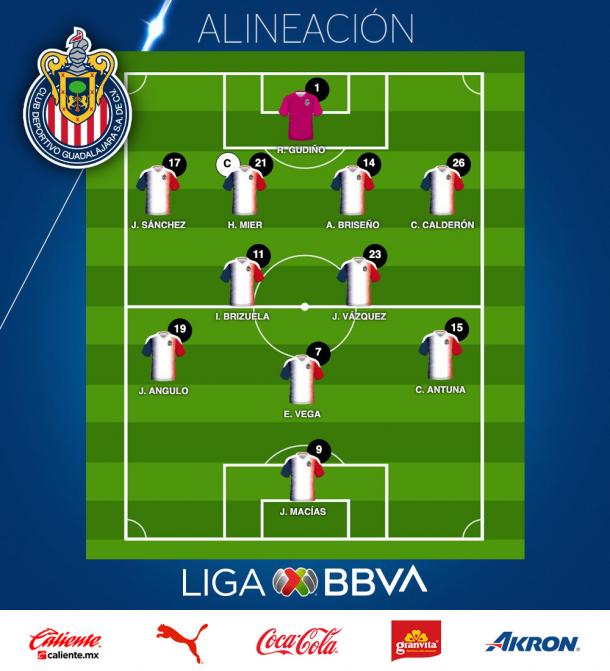 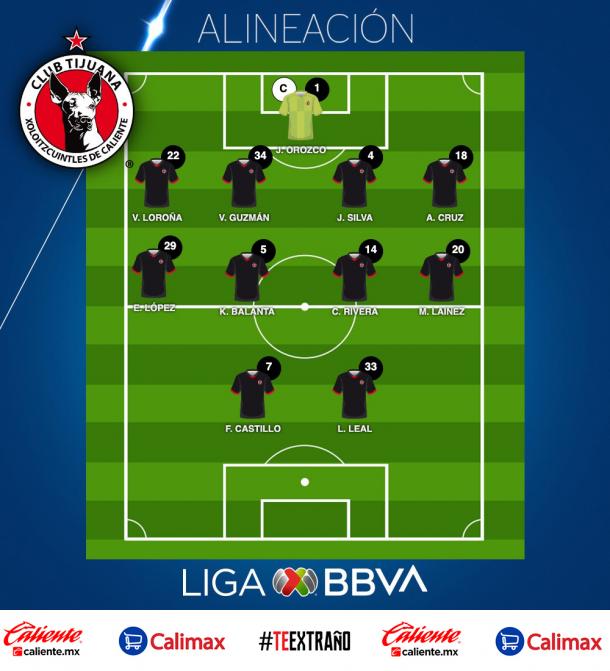 Chivas' young striker José Juan Macías has scored against Xolos on four occasions during his short career. Will he be able to find the back of the net tonight? 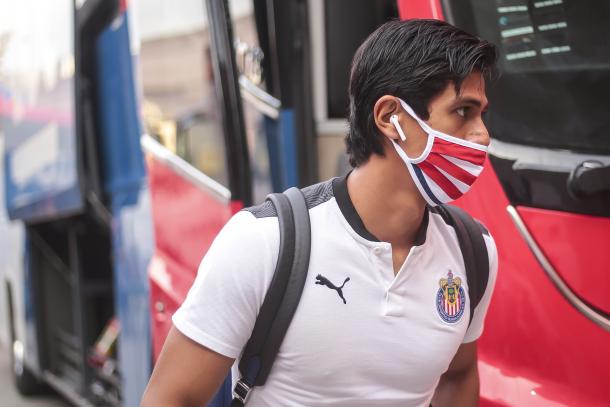 There's good weather in Tijuana for our match!

The current temperature in Tijuana is 78ºF, with no possibility of rainfall.

The conditions for a soccer game are optimal at Estadio Caliente. 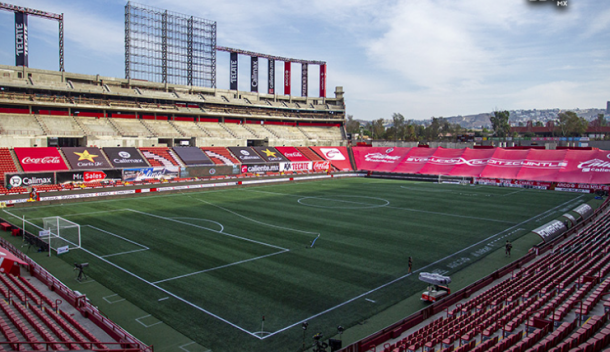 Antonio Rodríguez, Jesús Angulo, and José Antonio Madueña are the members of the current squads that have defended both shirts.
9:13 PM22 days ago

Guadalajara ready at their locker room!

The Chivas players are ready in their locker room preparing to seek three crucial points for their Liguilla aspirations.

Chivas took an early flight to Tijuana today in order to face this match against Xolos.

We're ready to bring you the best action from this match between Xolos and Chivas.

We're an hour away from kick-off at Estadio Caliente. The line-ups are coming soon!

Do not miss a detail of the match Xolos Tijuana vs Chivas with the live updates and commentaries of VAVEL. Follow along with us all the details, commentaries, analysis, and lineups for this Xolos vs Chivas match.
8:57 PM22 days ago

How to watch Xolos vs Chivas Live TV and Stream

If you want to watch the game on TV, tune in to Fox Deportes.

If you want to directly stream it: FoxSports.com

The referee for this match will be Jorge Antonio Pérez Durán.

Guillermo Pacheco will act as the fourth official.

Xolos will try to win!

The Tijuana side has been very inconsistent during the tournament.

Xolos has 8 straight games without a draw. Their record in that period is 5 losses and 3 wins.

Can they get that much-needed win to get into the play-off site? 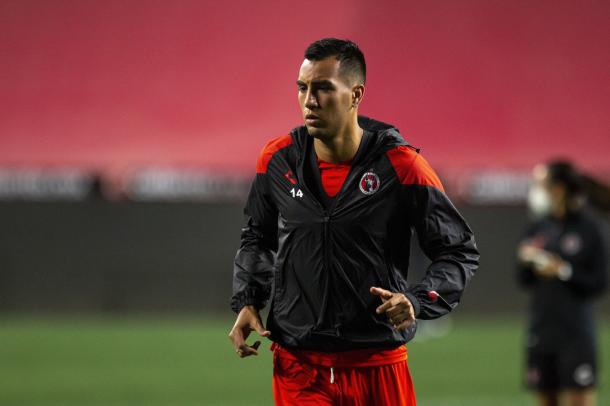 Ready for the match!

The Guadalajara side will not have Jesús Molina due to injury, while Gilberto Sepúlveda is unavailable as he traveled to the Netherlands with the Mexican National Team.

Xolos for another crucial three points

Xolos de Tijuana won a crucial mid-week fixture against FC Juárez that leaves them in a great position to fight for a spot in the top 12.

A win tonight would place them as 9th with 16 points and in a great position for the final stretch of the 2020 Guard1anes.

Guadalajara looking to remain in the top spots

After losing the Clasico Nacional against America, Chivas bounced back to win their next game when they faced Mazatlán.

Despite the victory, Vucetich's team had not a convincing performance.

Tonight they'll try to get another victory to stay among the top 8 places of the table.

8:17 PM22 days ago
The Xolos vs Chivas match will be played at the Estadio Caliente in Tijuana, Mexico. 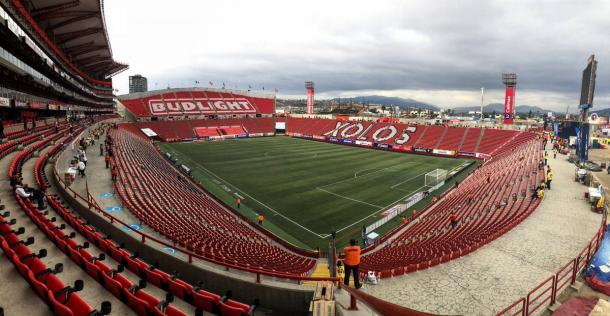 Welcome to VAVEL.com’s LIVE coverage of the 2020 Liga MX match: Xolos vs Chivas.