Thank you for following the broadcast of Barcelona 1-3 Real Madrid in the Clásico Español. The Merengues extend the agony of Barcelona who add their second defeat in La Liga. For more details go to VAVEL.COM
10:57 AMa month ago

Real Madrid with authority and with a better second time beat Barcelona 3-1 to take the lead with 13 points
10:56 AMa month ago

Leo Messi is reprimanded for claiming
10:54 AMa month ago

Modric takes advantage of the bounce and puts the 3-1

Dembélé's center shot that goes by cliff
10:50 AMa month ago

Another great save by Neto in a crossfire by Sergio Ramos
10:47 AMa month ago

Double save by Neto in a couple of attempts by Kroos, near Madrid
10:45 AMa month ago

Barcelona squeezes based on centers, so far none of danger
10:43 AMa month ago

Messi free shot that hits the barrier
10:39 AMa month ago

Foul on Busquets and Barcelona will have a direct free kick
10:37 AMa month ago

Dangerous Messi service that Courtois rejects and the troubled defensives send it over the edge
10:34 AMa month ago

Busquets was trying to filter the ball to Messi, but Courtois anticipated
10:31 AMa month ago

Real Madrid's area is asked for a penalty, it will be checked in the VAR
10:30 AMa month ago

Left-handed Coutinho that is deflected and there is corner shot
10:27 AMa month ago

Penalty kick for Madrid. Lenglet is cautioned
10:20 AMa month ago

Kroos free throw where Ramos calls a foul for a pull
10:18 AMa month ago

Decomposed shot of Benzema that goes over the top
10:14 AMa month ago

Center of Fati and Coutinho's header that hits the net outside
10:13 AMa month ago

Last Alba Center that Fati can not finish off in the area
10:12 AMa month ago

Messi was trying to enter the area, but was disarmed by Lucas Vazquez
10:06 AMa month ago

The second half starts
9:58 AMa month ago 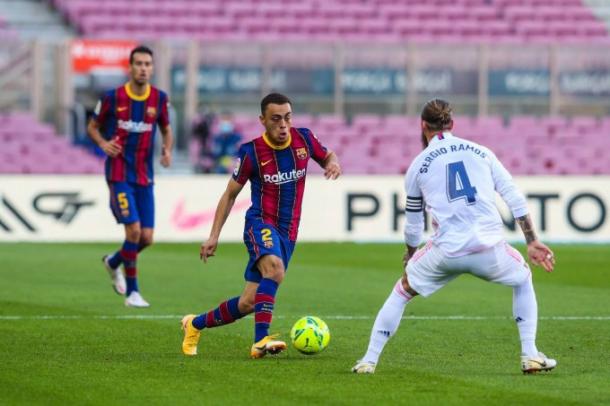 Vinicius was looking for Benzema, but Piqué refused at a corner
9:47 AMa month ago

Lack of Coutinho on Asensio to cut the offensive advance
9:44 AMa month ago

Now the center is of Nacho who cut the defense of Barcelona at first post
9:42 AMa month ago

Alba reaches the baseline, but the center came easily to Courtois
9:38 AMa month ago

Nacho fouls Coutinho and is reprimanded
9:38 AMa month ago

Real Madrid's double attempt, but the Blaugrana's defense was revolted to prevent it
9:37 AMa month ago

Messi service looking for Fati, but the ball came to Courtois
9:35 AMa month ago

Mendy tries to put the center which is deflected by Dest. Then Messi tries to get out and Kroos fouls him
9:32 AMa month ago

Barcelona has the ball, but Madrid squeezes it from their low sector
9:29 AMa month ago

Messi fell into the area, but nothing is sanctioned
9:27 AMa month ago

Lack of Casemiro on Busquets in midfield
9:26 AMa month ago

Benzema had the second one, but Neto threw himself and caught the ball. Near Real Madrid
9:21 AMa month ago

First shot by Messi that arrives at Courtois, although Messi is left lying on the field.

In addition Casemiro was cautioned

Lenglet managed to clear, but Vinicius was the last to touch the ball and it will be a goal kick
9:16 AMa month ago

Coutinho is encouraged by the forehand that went out to the location of Courtois
9:14 AMa month ago

Coutinho's distant shot that stays in a defender's legs. Barcelona has taken control of the game
9:13 AMa month ago

The play was initiated by Messi to serve Alba, who went deep and gave three quarters of a goal to Fati who did not forgive
9:10 AMa month ago

Alba's center and Fati's finish for the 1-1 tie

The referee has sanctioned Benzema's out of place
9:08 AMa month ago

Outstanding assistance from Benzema, who held the ball and waited for Valverde's arrival to release the pass
9:07 AMa month ago

Filtered pass for Valverde, which subtly defines for 1-0

Long service looking for Fati, but Courtois comes out perfectly and keeps the ball
9:05 AMa month ago

I was trying to connect Fati with Messi, but Varane anticipated and cut the danger
9:02 AMa month ago

Real Madrid starts with the ball, but fails to pass from midfield
9:01 AMa month ago

The game begins
8:58 AMa month ago

Both teams are nowhere near the Camp Nou for this exciting clash between Barcelona and Real Madrid
8:56 AMa month ago

This is the first time they will face each other as coaches, because they never did as players, Ronald Koeman against Zinedine Zidane
8:54 AMa month ago

Real Madrid is in third place with 10 points in five games, while Barcelona is in tenth place with only seven points
8:50 AMa month ago

In case you missed the Barcelona and Real Madrid line-ups, here they are... 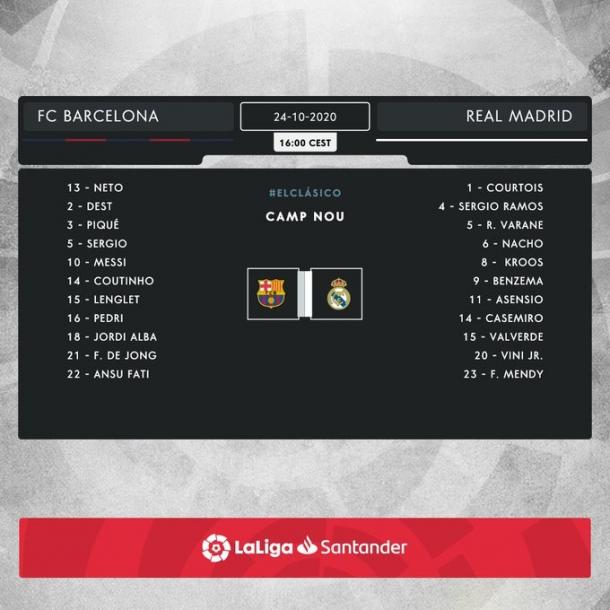 This is how the warm-up for Barcelona takes place, remembering that the game will be played without an audience 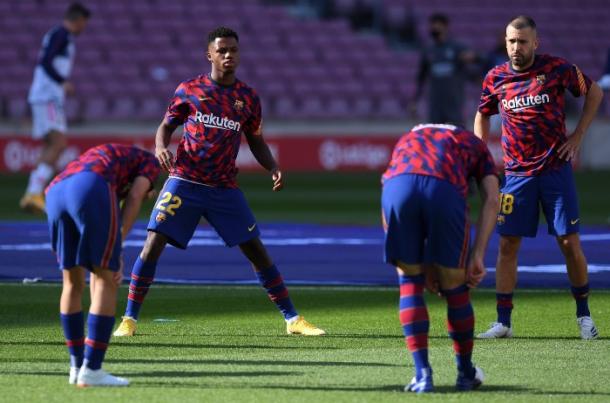 Ansu Fati is the team's top scorer with three goals, and will now look to score against Real Madrid
8:37 AMa month ago

The best in the world

Although there was a lot of uncertainty, Messi will play one more Classic, although he will try to cut a two-year scoreless streak, will the Argentinean score today? 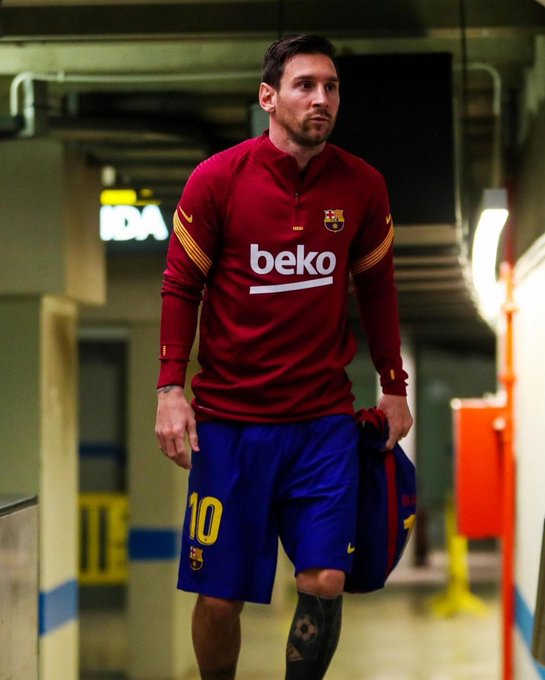 Pedri will live his first classic, after scoring his first goal in Champions last Wednesday against Ferencváros 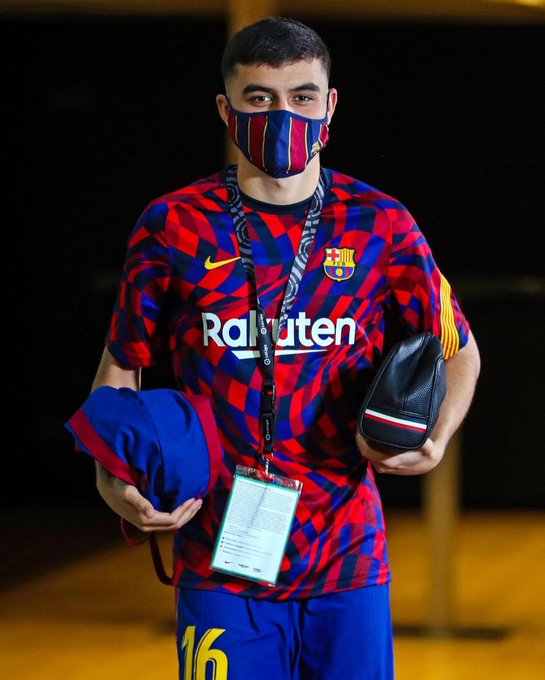 The Camp Nou is in very good condition for this match. They haven't seen each other here since last year when they drew 0-0 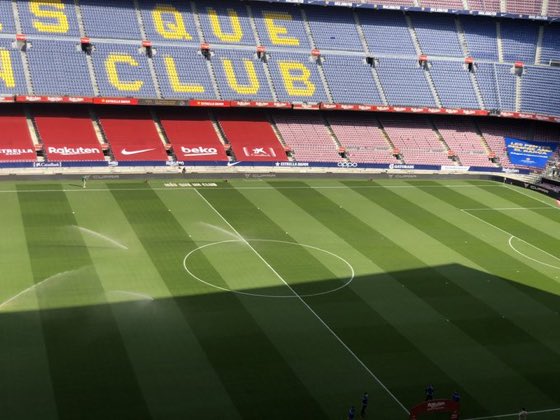 This is what the dressing room of Barcelona looks like, minutes away from the transcendental match they will play against Real Madrid 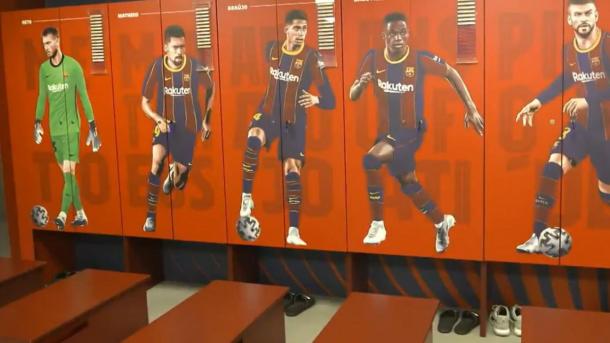 While Ronald Koeman makes three changes with respect to the defeat against Getafe, where the main novelty is that Griezmann is not going to headline this morning
8:12 AMa month ago

Zinedine Zidane sends four modifications with respect to his last game, emphasizing that in the bank there were men of experience like Marcelo and Isco
8:07 AMa month ago

With a Brazilian touch

A few years ago it was Ronaldinho, now it is Vinicius who will seek to leave his mark on the Spanish Classic 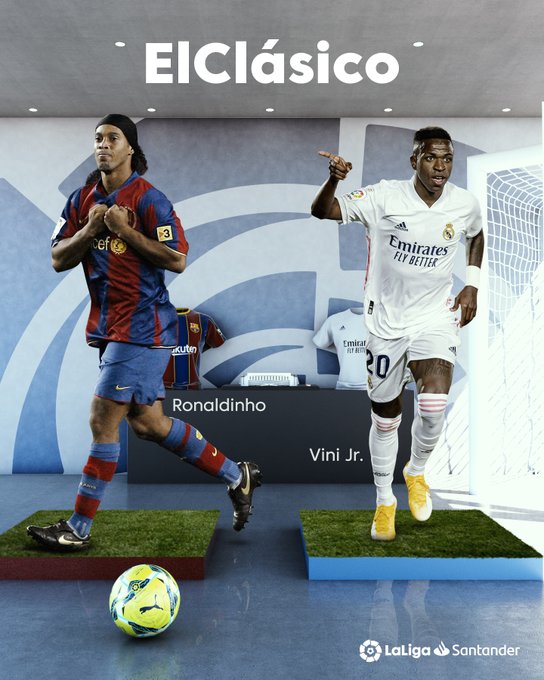 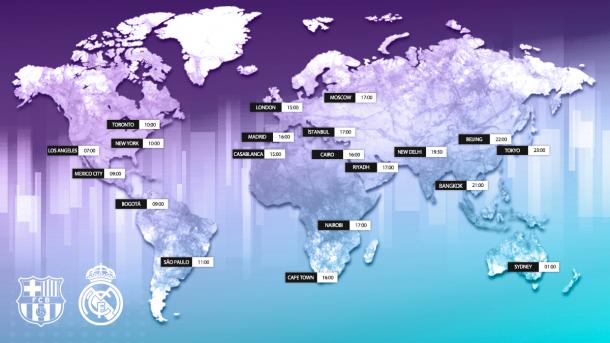 Just one hour before the start of the Spanish La Liga Classic between Barcelona and Real Madrid, we start with the great coverage we bring to you in the purest VAVEL style
7:42 AMa month ago

Do not miss a detail of the match with the live updates and commentaries of VAVEL. Follow along with us all the details, commentaries, analysis and lineups for this Barcelona vs Real Madrid match.
7:37 AMa month ago

Barcelona has the advantage in the last five matches in any competition with a balance of two wins, two draws and a single defeat.

The most recent time they played at Camp Nou was on December 18, 2019 with a scoreless draw.

How to watch Barcelona vs Real Madrid Live TV and Stream

If you want to watch the game on TV, your options is: beIN Sports.

The offensive attack of the Merengues has depended a lot on what the Frenchman Karim Benzema can do, although he has barely scored a goal in five games.
7:22 AMa month ago

The looks and the blaugrana soccer happens in what Leo Messi can do, who comes inspired after having scored in the middle of the week in the Champions by means of the penalty.
7:17 AMa month ago

The referee for this match will be Juan Martínez Manuera
7:12 AMa month ago

Real Madrid: coming out of the mini crisis

Two home defeats in a row (against Cadiz in La Liga and against Shakthar in the Champions League), the pressure on Zidane and the squad is at its peak and they can't afford another consecutive loss.
6:57 AMa month ago

Barcelona: to give a coup of authority

After the criticism and the bad results of the last months, a victory in the Clásico Español Darío was a key blow in the heart of Blaugrana, especially after losing the undefeated last week when they lost 1-0 to Getafe.
6:52 AMa month ago

The Barcelona vs Real Madrid match will be played at the stadium Camp Nou, in Barcelona. The kick-off is scheduled at 10am ET.
6:47 AMa month ago

Welcome to VAVEL.com’s LIVE coverage of the 2020 LaLiga match: Barcelona vs Real Madrid!