Thank you for following the broadcast of the first leg of the semi-final between Morelia and Atlante. See you next time.
3:43 PM9 months ago

They did not take advantage of

Morelia, two men down, salvaged a 1-1 draw at home and will now be forced to win away. Atlante needs a win or a draw by any score.
3:38 PM9 months ago

Moregrega's foul on Ledezma has been sanctioned by the referee.
3:23 PM9 months ago

Another header by Sanchez that goes over the top of the goal.
3:18 PM9 months ago

Change of Morelia. It was all for Martinez and Gallegos enters.
3:13 PM9 months ago

Changes of the Atlante.

Luis Pérez elbowed his way out.
3:03 PM9 months ago

Solid finish by Ledesma in the hands of Hernández.
2:58 PM9 months ago

Ricardo Valiño claims and is reprimanded the technician from Morelia.
2:53 PM9 months ago

Corner shot where Sanchez arrives alone, but fails to make a good contact and goes off course.
2:48 PM9 months ago

Medium-distance shot by García that saves Núñez and commands a corner shot.
2:38 PM9 months ago

Great centre of García that slightly deviates Moragrega and Núñez reaches to save his goal.
2:33 PM9 months ago

Acosta came out and Pineda went in. Change of Morelia.
2:23 PM9 months ago

Alafitta is reprimanded.
2:18 PM9 months ago

Rolando González defines by in the middle of the legs after Ronaldo's pass for the 1-1.

Atlante's counter-attack that García does not take advantage of and ends up in a corner.
2:08 PM9 months ago

Centre shot by Gómez that goes sideways although there is a corner shot.
1:53 PM9 months ago

Atlante has more time for the ball, but cannot find the spaces to generate damage.
1:48 PM9 months ago

Departure centre controlled by Núñez without any problem.
1:43 PM9 months ago

Moregrega is fouled on the goalkeeper when he fights for the ball in the air.
1:38 PM9 months ago

Pablo Gómez's header hits the crossbar in front of the goalkeeper's deflection.
1:23 PM9 months ago

One more minute is added
1:18 PM9 months ago

Zurita receives double yellow and is expelled. Morelia is down a man.
1:08 PM9 months ago

Mejía fouls González and is reprimanded.
1:03 PM9 months ago

Luis García with the direct free kick that hits him very badly.
12:58 PM9 months ago

Pablo Gómez is shot down and Zurita is reprimanded by Morelia.
12:53 PM9 months ago

Delayed diagonal that Tamay hits and the defensive one takes out in the small area.
12:48 PM9 months ago

Ramirez controls with his chest and takes out the shot that goes off course. Close to Morelia.
12:43 PM9 months ago

Service passed to second post that downloads Núñez without problem.
12:38 PM9 months ago

Luis García now receives a yellow card for a midfield sweep of Tamay.
12:33 PM9 months ago

Moregrega does not control the ball well in the area and commits a foul.
12:23 PM9 months ago

Ramirez takes off the goalkeeper and puts the service to Tamay for the 1-0.

Now the foul is on Luis Garcia and the match is still very close.
12:13 PM9 months ago

They claimed a penalty on Perez inside the area and the whistle does not sanction anything.
12:08 PM9 months ago

It seemed to obstruct Gonzalez, but the referee does not point to anything.
12:03 PM9 months ago

Now Tamay's foul is on an Atlantean defender and the match was cut short in the early stages.
11:58 AM9 months ago

Shooting centre of Moragrega that leaves very crushed without finding some addressee.
11:53 AM9 months ago

Strong entrance by Ronaldo Gonzalez and he is warned.
11:48 AM9 months ago

Gonzalez was trying to get the serve in, but the Michoacán defence wouldn't concede the corner kick.
11:43 AM9 months ago

Atlante tries to hold the ball and advance lines, but so far without much depth.
11:38 AM9 months ago

Ramírez was trying to create danger, but he managed to slap González in the face.
11:33 AM9 months ago

The game between Morelia and Atlante begins.
11:28 AM9 months ago

They finish heating up

Both Morelia and Atlante have concluded their warm-up stage at the Morelos stadium. Minutes from the start of the game.
11:23 AM9 months ago

With a lot of experience

Arturo Ledesma has been a regular and constant player in Ricardo Valiño's starting eleven, not only defending, but also having a good aerial attack. 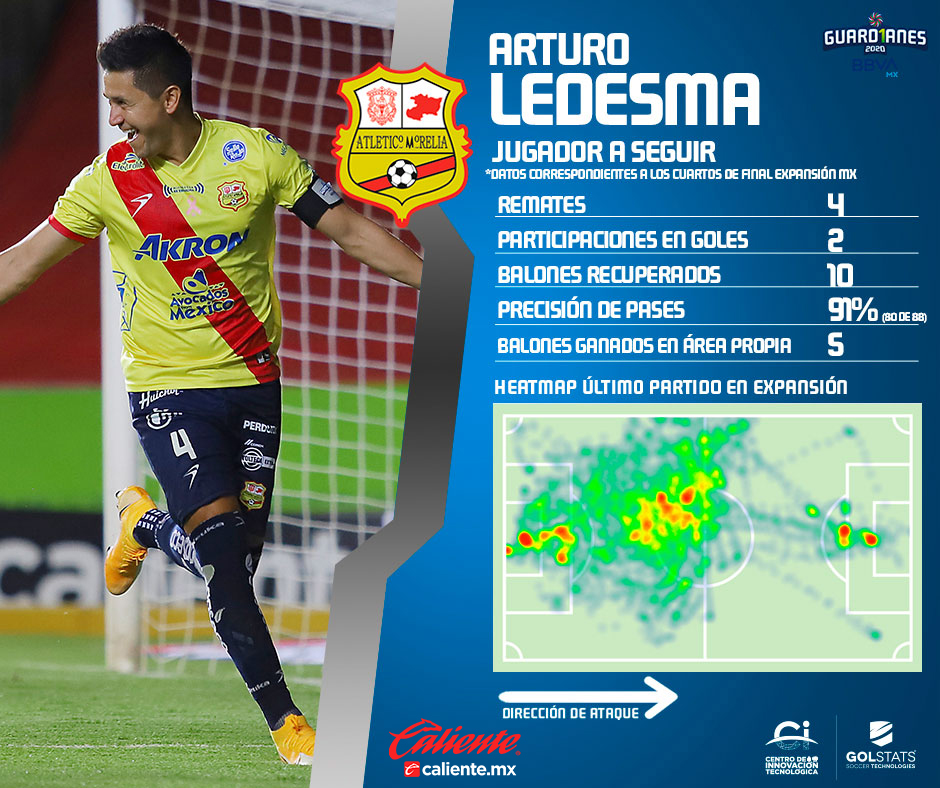 The last time that Atlante settled in the semi-final round they could not reach the final after losing to the extinct Cañeros de Zacatepec, exactly one year ago.
11:13 AM9 months ago

In the other semi-final series, Tampico Madero is beating the Toros del Celaya 1-0, who haven't played since November 18th when they beat Cancun.

Atlante has conceded 15 goals in 17 games, but has had a leading man on the defensive in charge of Jonathan Sanchez. 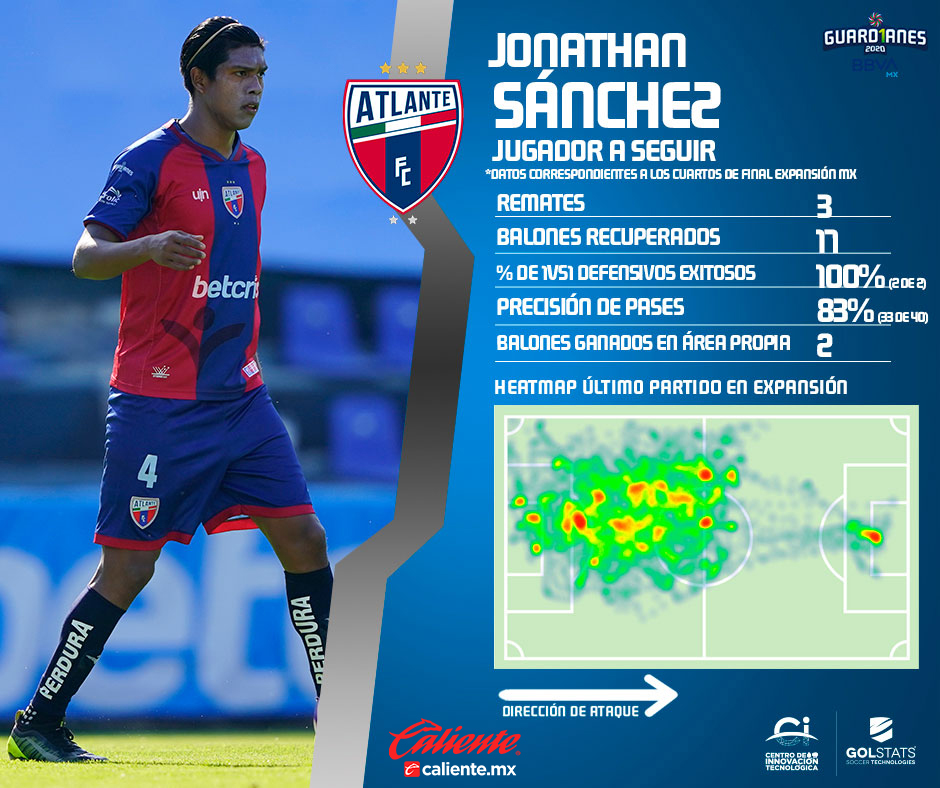 Morelia reached this stage thanks to a 1-0 victory over the Venados de Merida in the playoffs and then beat Coyotes de Tlaxcala in the quarterfinals.
10:58 AM9 months ago

Bluegrass changes in the attack

Moregrega receives the vote of confidence and Echeverría will start on the substitutes' bench.
10:53 AM9 months ago

Ricardo Valiño does not move him to a lineup that has worked quite well in the group with six goals, zero against and three victories.
10:43 AM9 months ago

They disarmed the university attack

Although Atlante did not play as upright a game as they had done in the regular season, they dedicated themselves to disarming the Pumas Tabasco, who never managed to get ahead in the series. 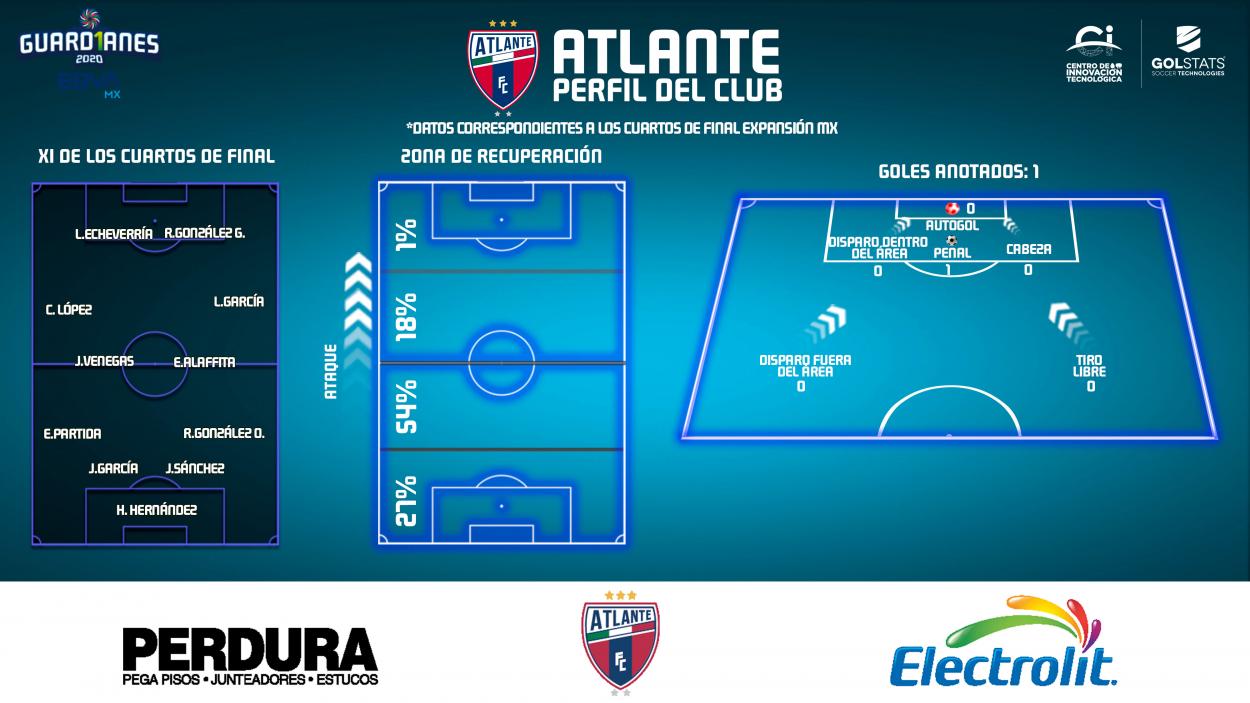 The Potros de Hierro were the best attack of the championship with 25 goals, of which 7 were scored by Captain Lizandro Echeverria, who won the scoring title. 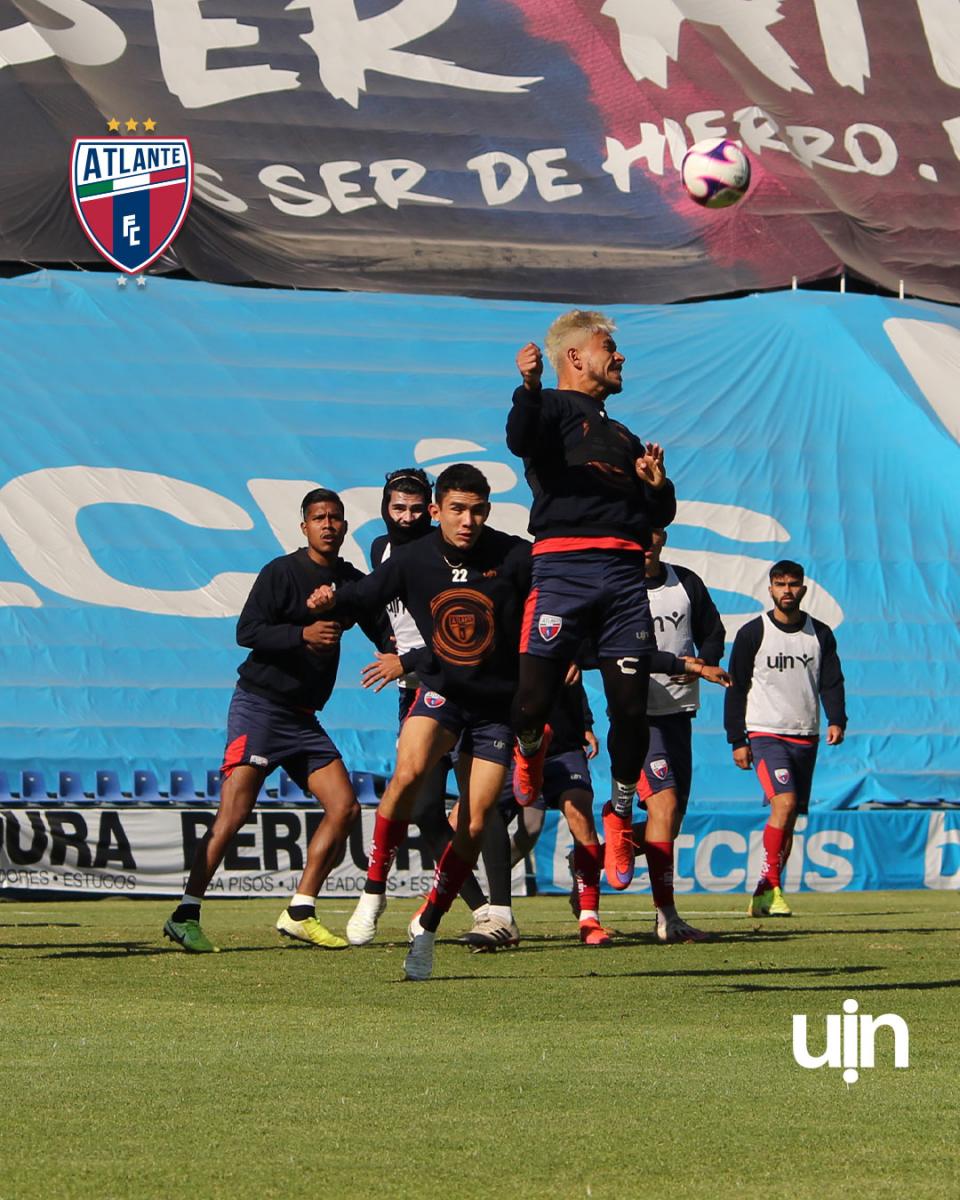 December 9 is not a normal date for the Azulgranas, as this day marks the 13th anniversary of their last MX League title after beating the Pumas of UNAM in the final. 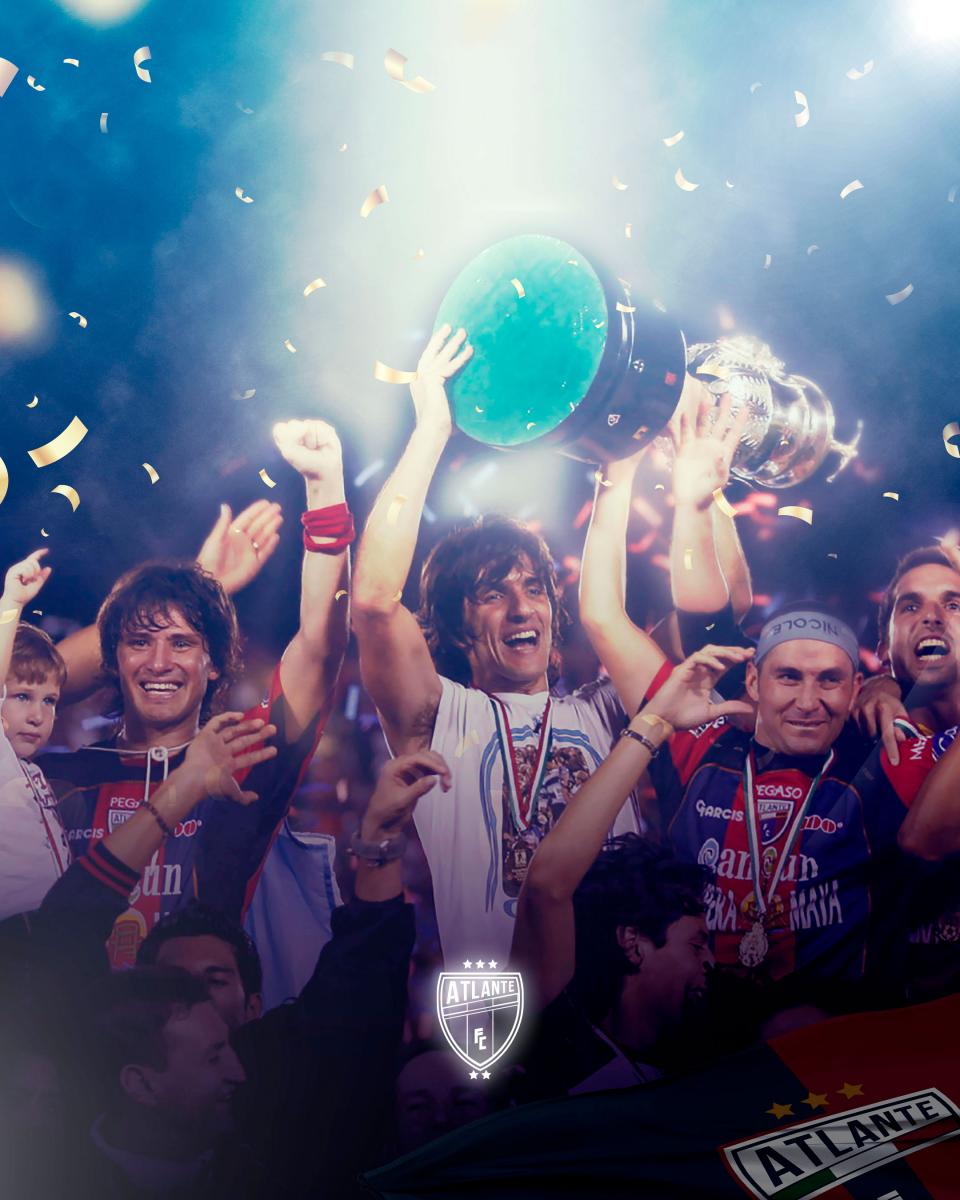 This is how the weather conditions will be for the first match of the series between Atlético Morelia and Atlante. 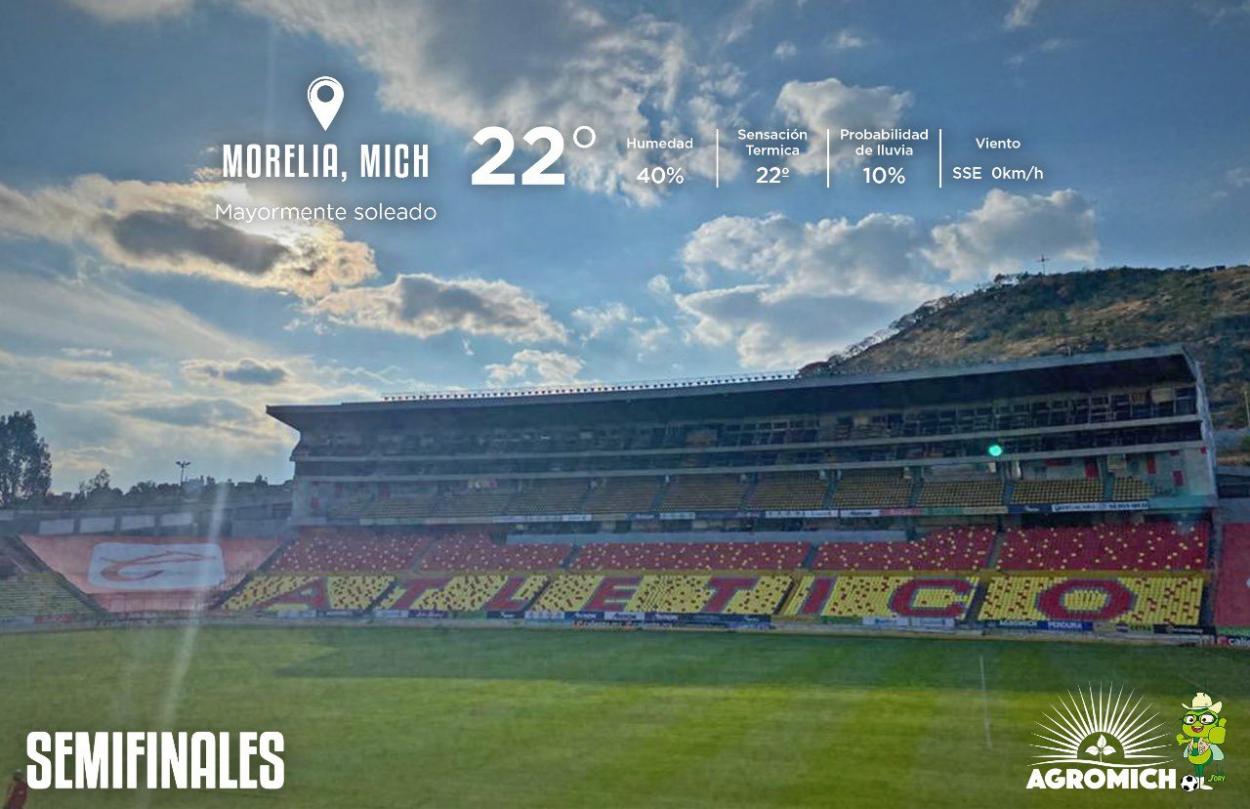 They arrived in Morelos

Morelia arrived a few moments ago at Morelos Stadium, with the objective of taking advantage to go more comfortably to the return game in the Mexican capital. 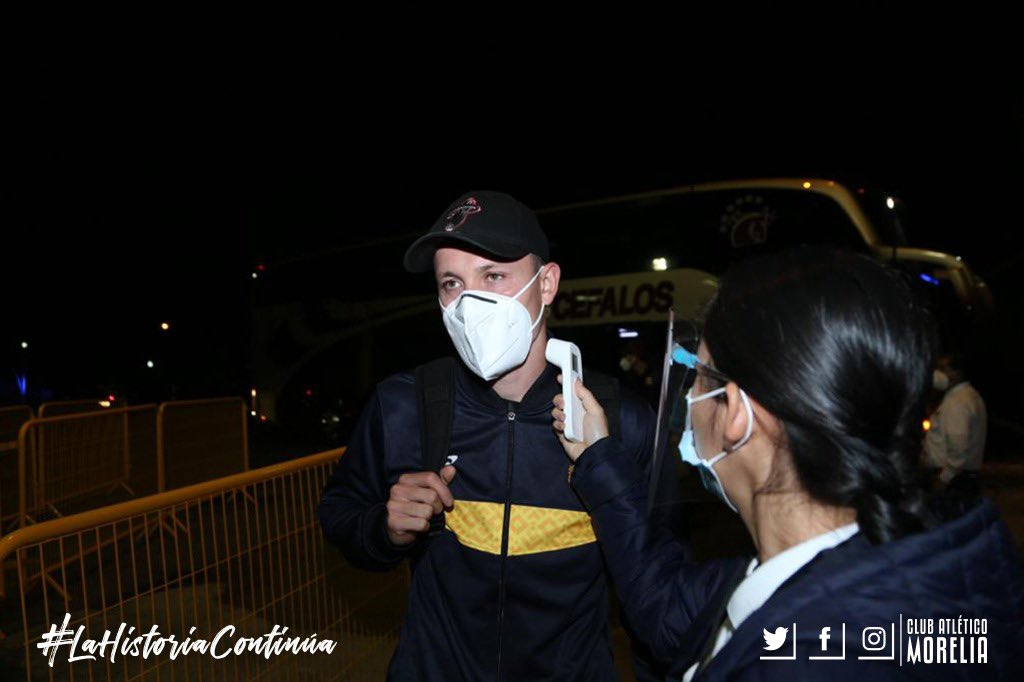 The second semi-final of the MX Expansion League gets underway with an attractive duel between Morelia and Atlante. We begin.
10:08 AM9 months ago

Do not miss a detail of the match with the live updates and commentaries of VAVEL. Follow along with us all the details, commentaries, analysis and lineups for this Atletico Morelia vs Atlante match.
10:03 AM9 months ago

These teams faced each other on the 9th date of the regular season with a victory for the "Canarios" by 2 to 1.
9:58 AM9 months ago

How to watch Atletico Morelia vs Atlante Live TV and Stream

Lizandro Echeverria was not only the captain of the team, but he ended up as the goal-scoring champion with seven goals, although in the group stage he has not yet scored. 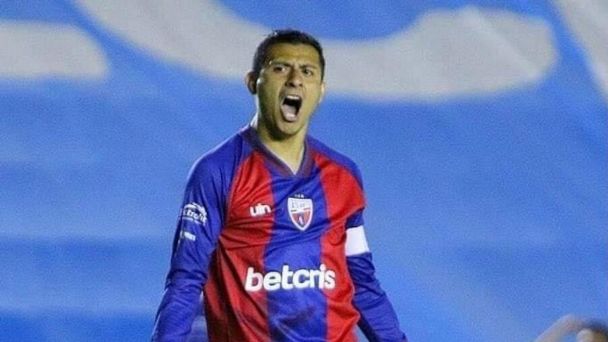 Gustavo Ramírez has established himself as the goal man for Morelia, as he has scored 10 goals so far, three of them at the big party. 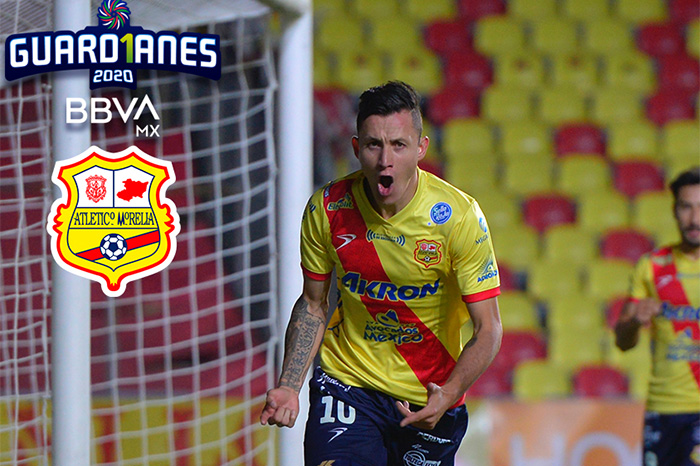 Referee for Morelia vs Atlante

Morelia vs Atlante will be arbitrated by Áxel Meza Méndez.
9:38 AM9 months ago

Atlante: be more precise in the final zone

After a 1-1 draw against Pumas Tabasco, but advancing by better position in the table, the Colts will have to tune up their aim, which was very erratic in the last 180 minutes.
9:23 AM9 months ago

After beating Venados and Tlaxcala, the Michoacán team knows that closing down in the Mexican capital will not be easy, so they will be looking to get some advantage for the return game.
9:18 AM9 months ago

The Atletico Morelia vs Atlante match will be played at the stadium Morelos, in Morelia. The kick-off is scheduled at 10:05pm ET.
9:13 AM9 months ago

Welcome to VAVEL.com’s LIVE coverage of the 2020 Liguilla Liga Expansion MX match: Atlético Morelia vs Atlante! My name is Adrián Hernández and I’ll be your host for this game. We will provide you with pre-game analysis, roster updates, and news as it happens live here on VAVEL.