Thanks for following this match on VAVEL USA. Until the next time!
1:18 AM8 months ago

On the next match, Pachuca visits Leon and Juarez receives Tijuana.
1:12 AM8 months ago

GOAL PACHUCA! Scored by Mauro Quiroga.
12:59 AM8 months ago

The referee adds four minutes to the match.
12:58 AM8 months ago

After checking the VAR, the referee decides that it is not a penalty for Pachuca.
12:56 AM8 months ago

The referee goes to the VAR to check a possible hand inside the Juarez area.
12:55 AM8 months ago

Flavio Santos leaves because of a discomfort in his leg and Alan Mendoza enters.
12:43 AM8 months ago

Goal cancelled for Pachuca. Offside by Mauro Quiroga.
12:41 AM8 months ago

Close Pachuca! Felipe Pardo tries with a left-handed shot, but his ball goes off target.
12:39 AM8 months ago

Although Pachuca has possession, the ball is very hard fought on the half-court.
12:28 AM8 months ago

Expulsion for Oscar Murillo. Double yellow card after a foul on Dario Lezcano.
12:18 AM8 months ago

Pachuca looks for the tie with constant centers to the area, but doesn't manage to connect in the best way.
12:10 AM8 months ago

The second half begins with a modification by Bravos. Andrés Iniestra enters and Francisco Contreras leaves.
11:58 PM8 months ago

That was the goal

The referee adds three more minutes to the first half.
11:46 PM8 months ago

CLOSE ROMARIO IBARRA! Pachuca came close to scoring the first goal of the match after a shot at the far post that went slightly wide of the goal.
11:41 PM8 months ago

Shot by Victor Guzman that goes over the target. Pachuca has arrived more in this half hour of the game.
11:33 PM8 months ago

After checking the VAR, the referee decides to expel Marco Fabian. Juarez is left with 10 men.
11:24 PM8 months ago

The referee goes to the VAR to check a possible red card for Marco Fabian after an entry on Romario Ibarra.
11:20 PM8 months ago

Close Pachuca! Delayed diagonal of Catalán in the area for Ismael Sosa. But his ball passes slightly off target.
11:10 PM8 months ago

Medical assistance comes in to treat a discomfort in Acosta's arm.
11:06 PM8 months ago

First arrival of the game by Bravos. Alberto Acosta is encouraged to shot out of the area directly to the angle, but the ball goes slightly off.
11:02 PM8 months ago 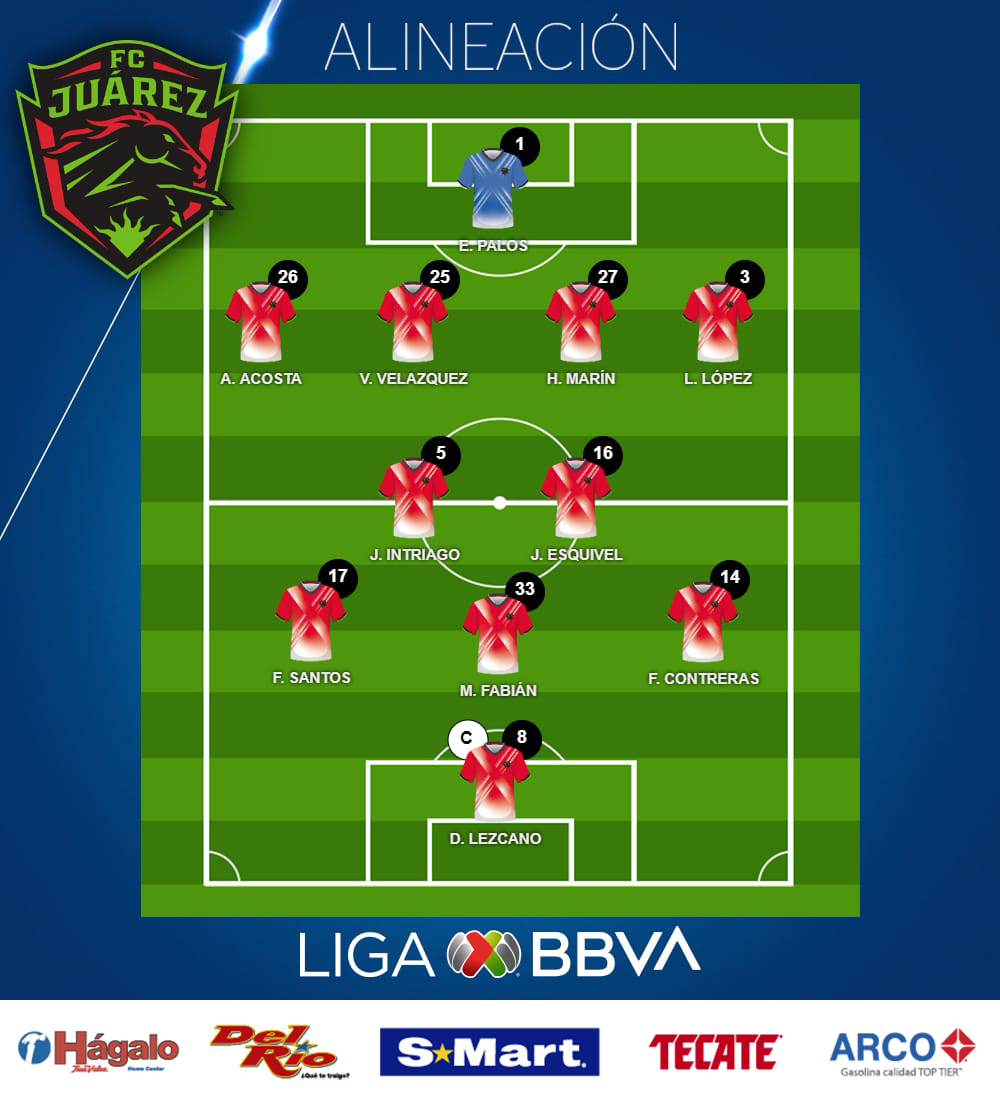 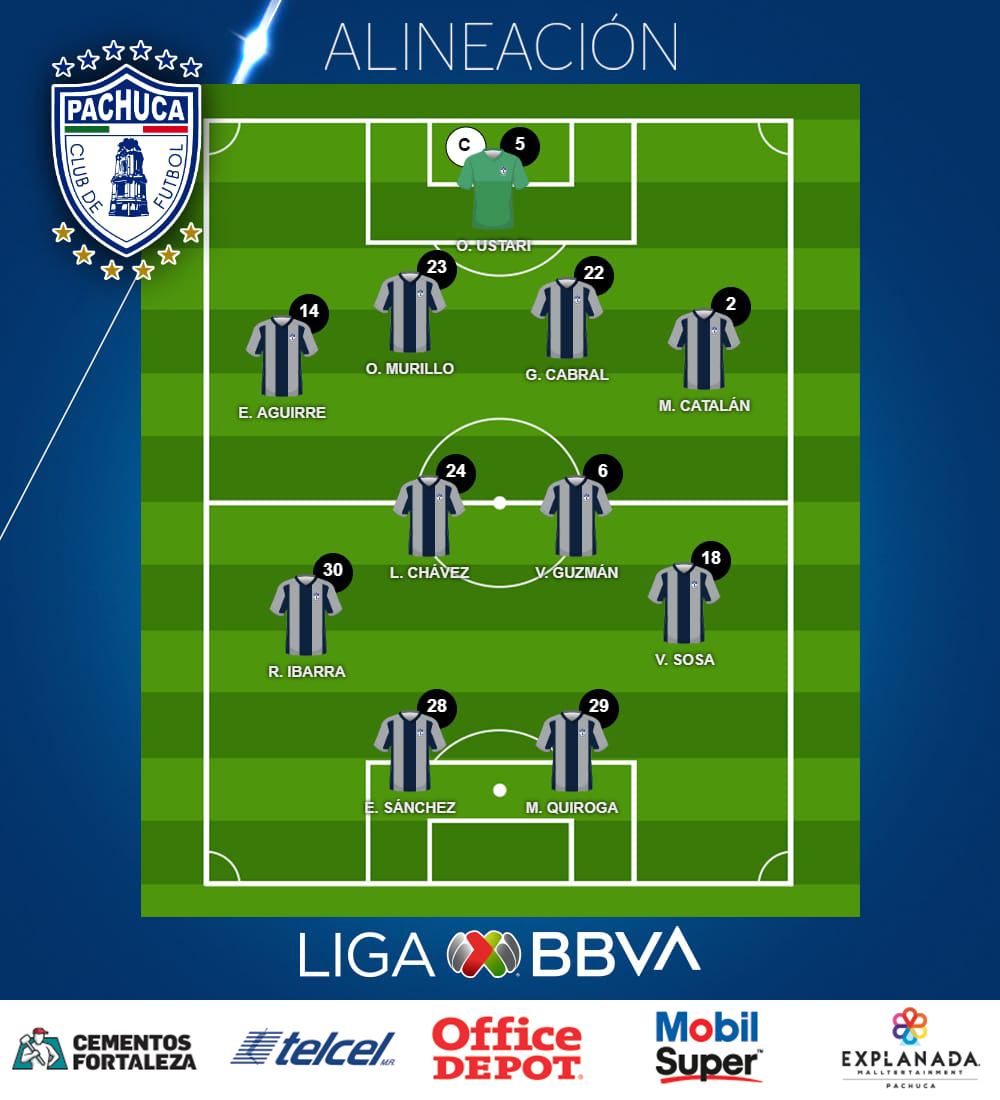 The players of the meeting have arrived at the Hidalgo Stadium with the corresponding hygiene protocols.
10:21 PM8 months ago

The history of clashes between these two teams is short. The balance is in Juarez's favor with a win and a draw. This is the third game where the two sides are facing each other. 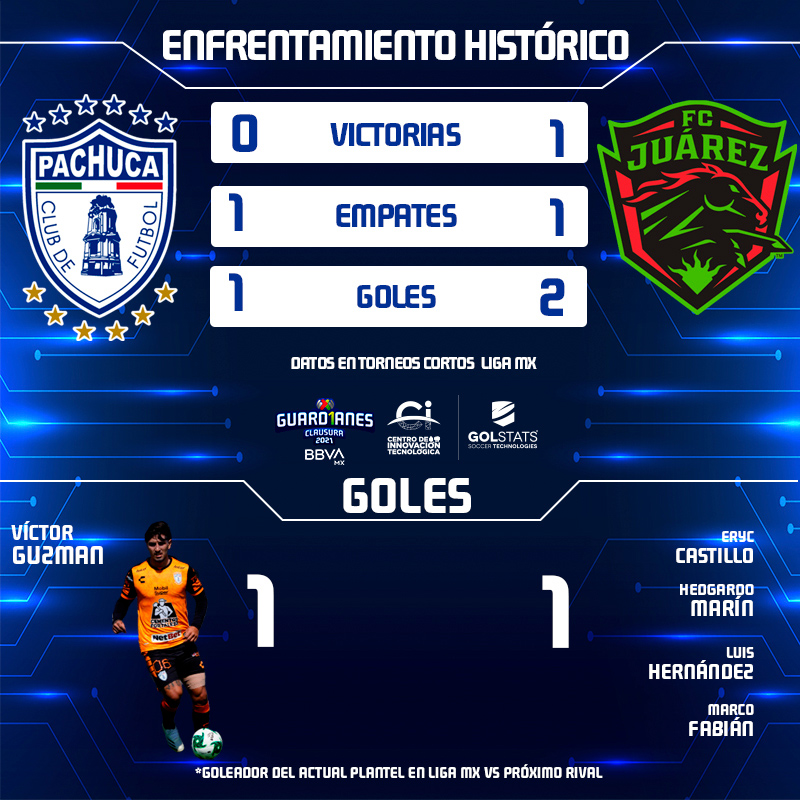 Before starting the meeting, Club Pachuca informed through its social networks that there are two positive cases of COVID-19. The identity of these cases is unknown.

The Miguel Hidalgo Stadium will host this match between Pachuca and Juarez. Inaugurated on February 14, 1993, it has a capacity for just over 30,000 spectators.
7:17 PM8 months ago

Do not miss a detail of the match with the live updates and commentaries of VAVEL. Follow along with us all the details, commentaries, analysis and lineups for this Pachuca vs Juarez match.
7:12 PM8 months ago

How to watch Pachuca vs Juarez Live TV and Stream

If you want to watch the game on TV, your options are: TUDN USA.

Mauro Quiroga: After the departure of Franco Jara, Pachuca has not found a lethal striker to be the team's goal scorer. In this tournament they bet on the hiring of Quiroga who, despite not having a brilliant pass through San Luis, did it with Necaxa. The Argentinean could make his debut today as tuzo.
7:02 PM8 months ago

Dario Lezcano: The Paraguayan forward was the leader of his team's scoring last tournament with 10 goals, staying three goals away from being champion. He will be looking to repeat the quota in this Guard1anes 2021.
6:57 PM8 months ago

Gabriel Caballero was dismissed before the beginning of the present tournament and the directive of the border team presented Luis Fernando Tena as the new coach of Bravos. In addition to him, Andres Iniestra, Ayron Del Valle and Luis Pavez will be joining the team. After losing the ticket to the playoffs on the last match against America, Juarez has a pending task with its fans since its incorporation to the first division and it is expected that this tournament will be the beginning of a team that will give surprises to more than one.
6:37 PM8 months ago

Despite the fact that Tuzos managed to get into the liguilla last year by eliminating Santos in the playoffs, the Hidalgo team has lost ground in recent tournaments. That's why Pachuca's directive has decided to back three players: Harold Mosquera from MLS, Mauro Quiroga and Matías Catalán from Atletico San Luis.

The team reported the following casualties: Victor Davila, Rodrigo Salinas and Leo Ramos. Pezzolano has a new opportunity to take Tuzos to the playoffs and take advantage of the new players that joined his team.

The Pachuca vs Juarez match will be played at the stadium Miguel Hidalgo, in Pachuca, Mexico. The kick-off is scheduled at 10:00pm ET.

Welcome to VAVEL.com’s LIVE coverage of the 2021 Liga MX: Pachuca vs Juarez!