Thank you for following the Argentinian Superclasico between Boca Juniors and River Plate. See you next time.
5:56 PMa month ago

Boca and River both earned their first draw of the tournament, although it did little to help them climb to the top of their respective groups.
5:55 PMa month ago

Unbelievably Boca is saved when the ball was played all the way across the goal line.
5:48 PMa month ago

Alvarez's free kick with ease to Andrada.
5:47 PMa month ago

A lot of inaccuracy from both teams when trying to reach the final third of the pitch.
5:39 PMa month ago

Angileri with a shot that Andrada saves with a great save.
5:33 PMa month ago

Zambrano is sent off for a double yellow card. Boca are reduced to ten men.
5:27 PMa month ago

In comes Alvarez and out comes Carrascal. River change
5:26 PMa month ago

River goal
Paravecino's header inside the six-yard box makes it 1-1.
5:22 PMa month ago

Tévez's shot at the near post is saved by Armani.
5:19 PMa month ago

Villa drove the ball forward but was unable to finish in the face of defensive intervention.
5:16 PMa month ago

Lizandro Lopez's shot is easy for the goalkeeper.
5:14 PMa month ago

River starts to control the action in an attempt to find an equaliser.
5:09 PMa month ago

Díaz with a shot from a corner that goes over the top.
5:07 PMa month ago

Romaroni missed the ball by hitting it too high on a counter-attacking play.
5:04 PMa month ago

Medina's shot over the top of the goal.
4:42 PMa month ago

Boca Goal
Villa from the penalty spot and through the centre opens the scoring 1-0.
4:42 PMa month ago

Capaldo is fouled inside the area and the referee awards a penalty.
4:38 PMa month ago

Tévez shoots inside the six-yard box and Armani makes a great save to keep the score at 1-0.
4:35 PMa month ago

Santos Borré offside when taking the ball on the right flank.
4:28 PMa month ago 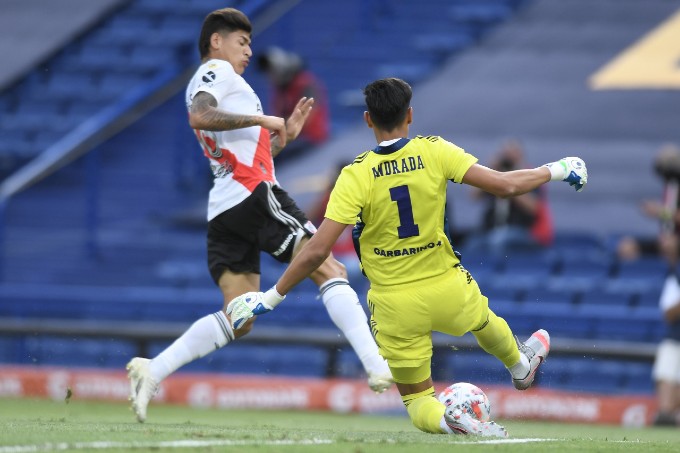 Andrada's poor start, De la Cruz shoots with an empty net, but the defence saves inside the area.
4:19 PMa month ago

Armani with some trouble takes the ball inside the area.
4:10 PMa month ago

De la Cruz with a mid-range shot that goes over the top.
4:08 PMa month ago

Borré's shot from half distance goes over the bar.
4:08 PMa month ago

Defensive error where Andrada managed to steal the ball from Carrascal.
4:06 PMa month ago

Boca had the ball for the first few minutes, but lacked depth.
4:04 PMa month ago

Izquierdoz's miscued shot at the far post is saved.
4:03 PMa month ago

Foul on Maroni which the referee has already pointed out.
4:01 PMa month ago

Boca and River are now taking to the field.
3:54 PMa month ago

We are minutes away from the start of the Clásico of Argentina between Boca and River.
3:49 PMa month ago

Their last match was on 2 January, also at the Bombonera, with a pulsating 2-2 draw.
3:43 PMa month ago

Boca's arrival at the stadium

Only two wins in four games, coupled with two defeats, put them in seventh place in Group A with just six points.
3:28 PMa month ago

It will not be available

Cardona is not in the starting line-up and will not be on the substitutes' bench due to an illness from which he was unable to recover. 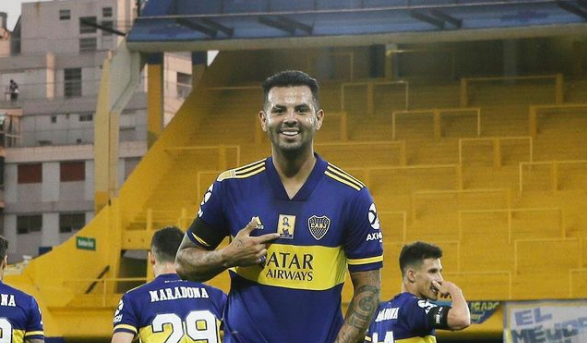 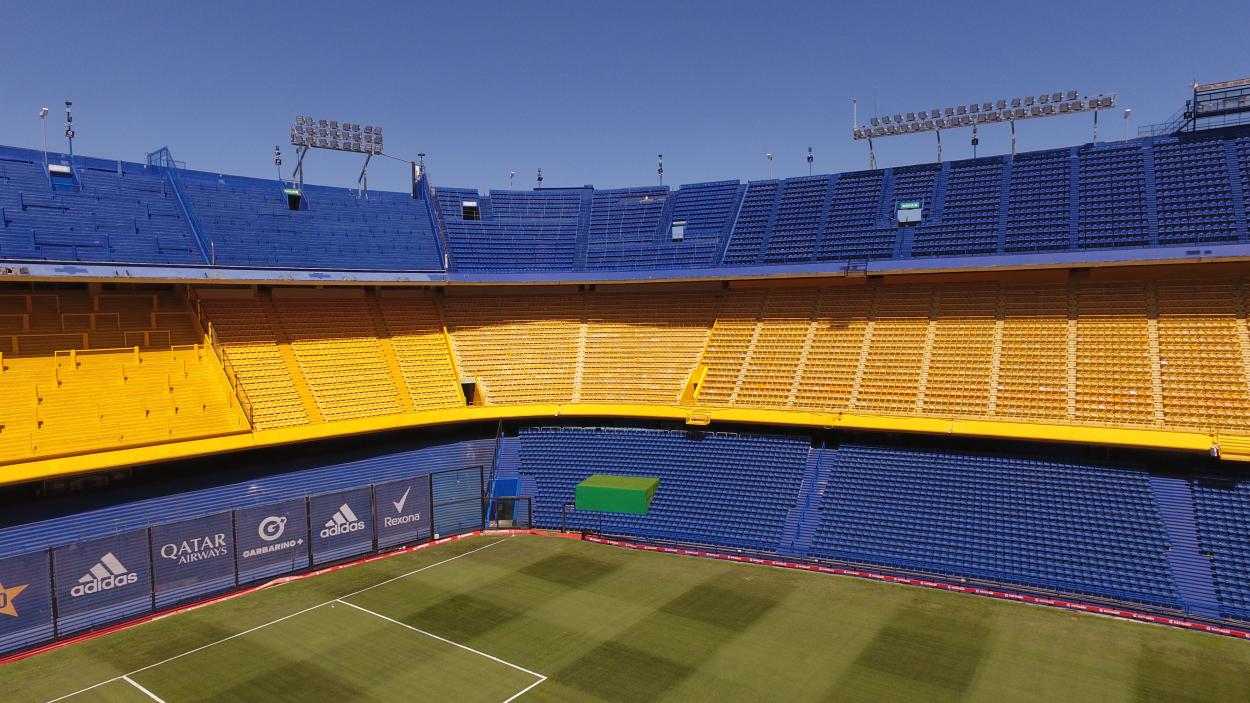 River recalled that three years ago they won the Argentine Super Cup with victory in the Clasico. 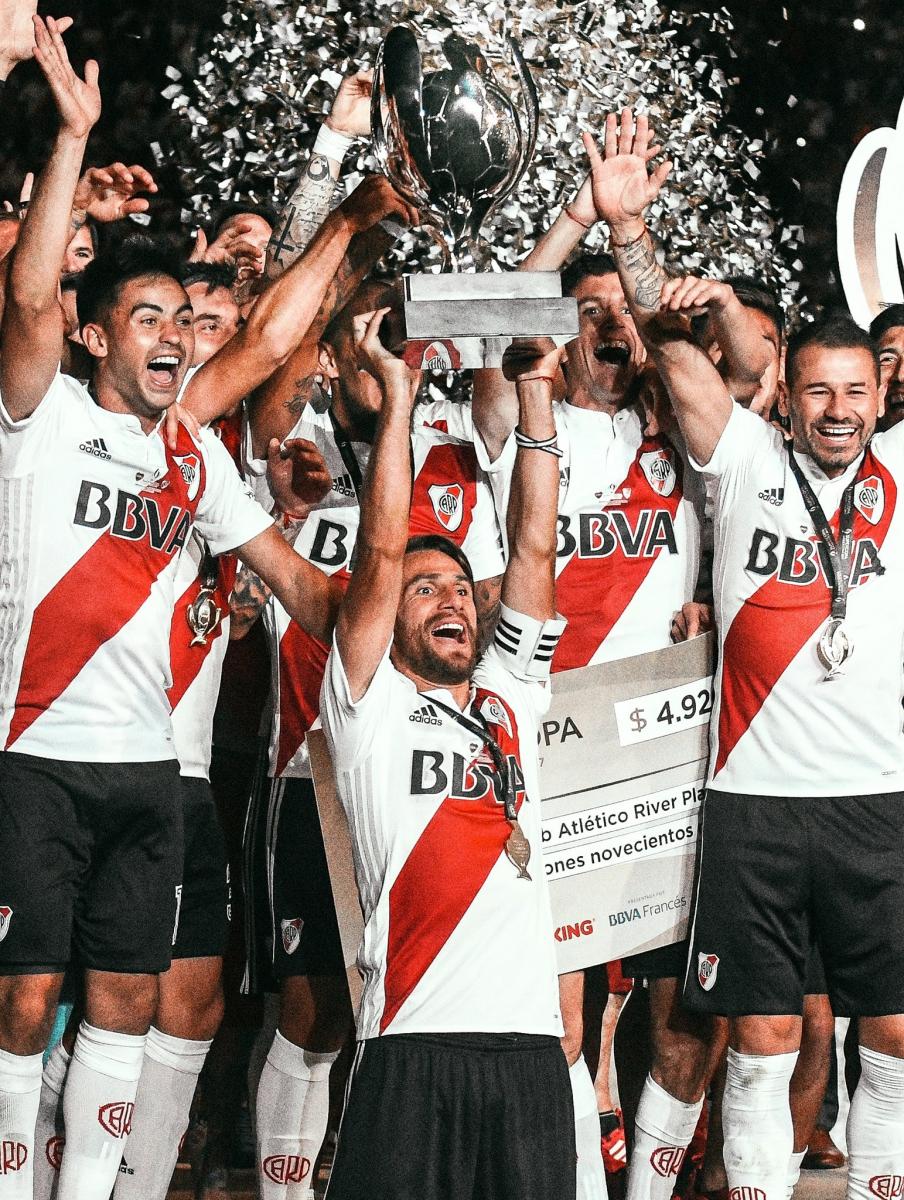 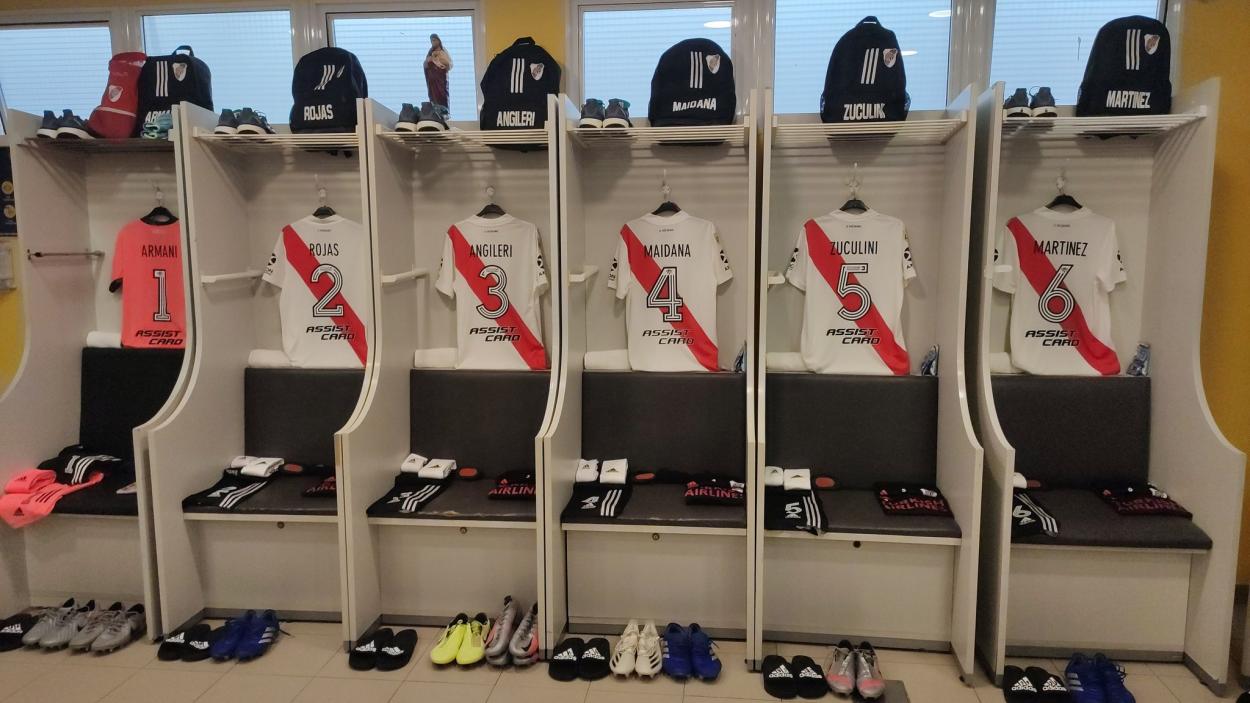 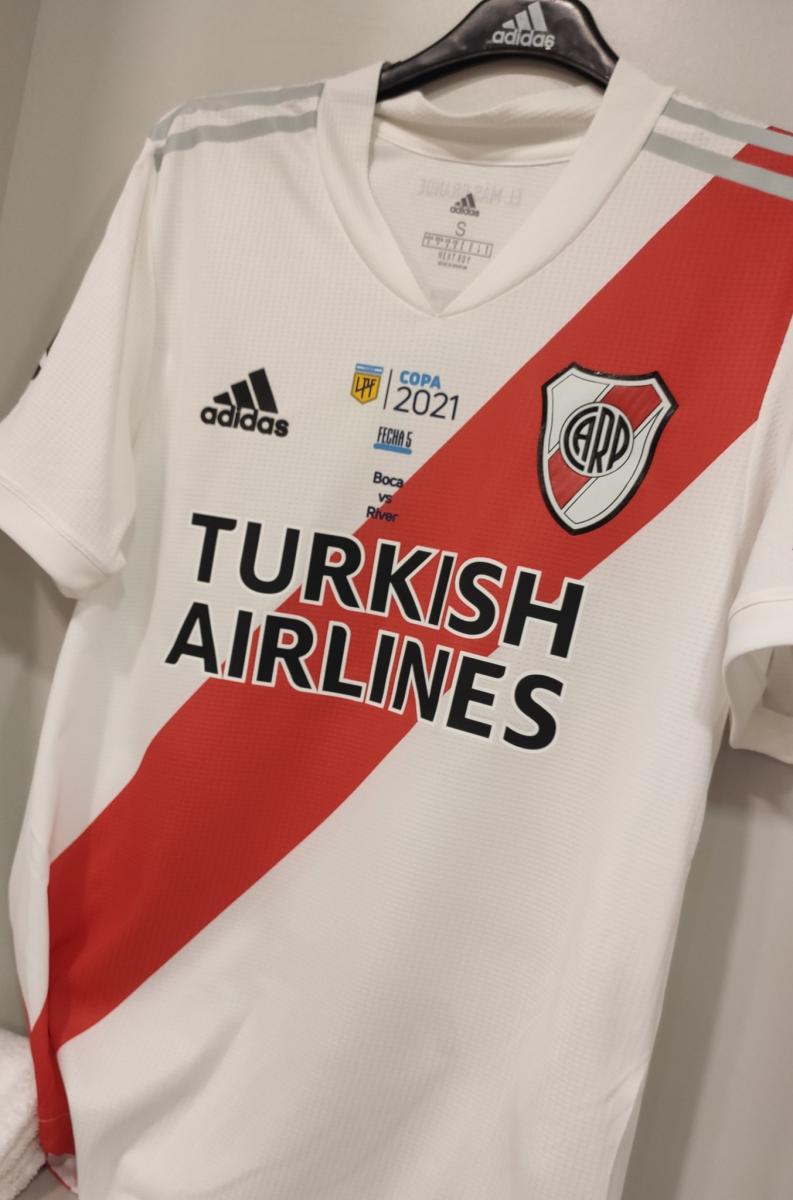 How to get Boca up?

Boca Juniors are unbeaten in four games with two wins and two defeats, currently sitting in sixth place in Group B.
3:00 PMa month ago

Another edition of the Argentine derby between Boca and River will be played this afternoon and we bring you all the details.
5:27 AMa month ago

Do not miss a detail of the match with the live updates and commentaries of VAVEL. Follow along with us all the details, commentaries, analysis and lineups for this Boca Juniors vs River Plate match.
5:22 AMa month ago

In total, 213 games have been played between the two teams in the league. The numbers are in favour of the xeneize, who are eight games ahead of their arch-rivals, having won 77 games. River have won 69, and they have played out 67 draws.
5:17 AMa month ago

If you want to watch the game on TV, your options is: TyC Sports.

The presence of Enzo Pérez stands out for El Millonario. The 35-year-old experienced midfielder, who can also provide sacrifice in defence, is the main source of danger. 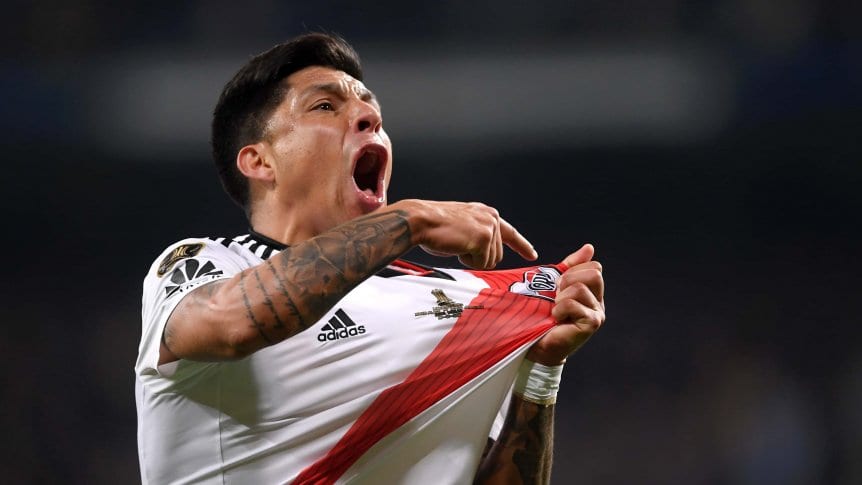 In the Xeneize team, the presence of Edwin Cardona stands out. The Colombian has played a key role in the team's success, scoring goals and providing crucial assists. 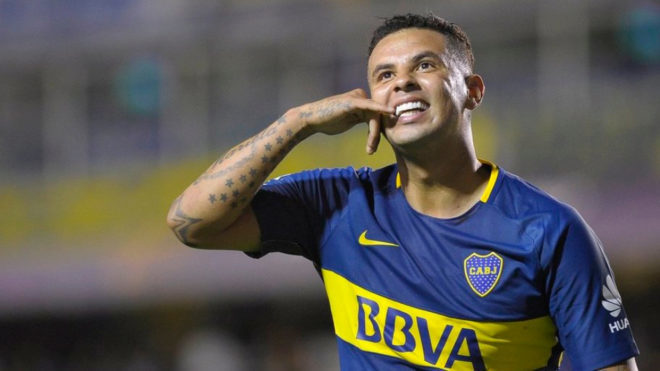 How is River arriving?

The Millonarios arrive to this game with concerns after the 1-0 defeat against Argentinos Jrs, where they had many doubts in defence and were not accurate in attack, hoping to be able to correct.
4:42 AMa month ago

How do Boca arrive?

The Xeneize arrives with a great present and with a lot of confidence after the crushing 7-1 defeat against Velez.
4:37 AMa month ago

The Boca Juniors vs River Plate match will be played at the stadium La Bombonera, in Buenos Aires. The kick-off is scheduled at 4pmET.
4:32 AMa month ago

CONCACAF Champions League: Second Round Ties a day ago